The Chicago Women's Park and Gardens - Part I

The Chicago Women’s Park and Gardens, located immediately south and west of Glessner House, was created to honor important women in the city’s history. To commemorate Women’s History Month, we begin a three-part series exploring the history of the park and the women that it honors. In Part I, we will reveal what originally stood on the site, with a particular focus on the development and decline of Indiana Avenue. 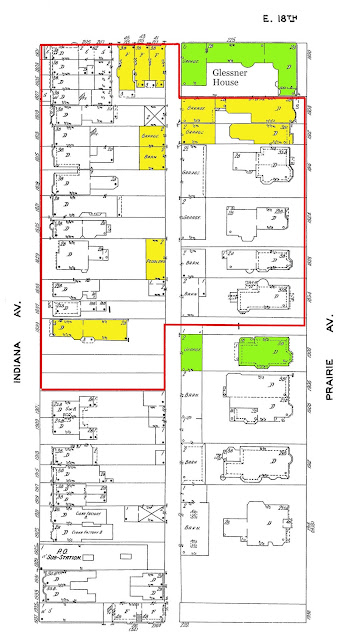 The map shown above captures the block, which presently contains the park, as it appeared in 1911. Prairie Avenue is on the right (east), Indiana Avenue on the left, 18th Street at the top, and 20th Street, now Cullerton, at the bottom. The site of the park and fieldhouse is outlined in red. The two buildings shown in green – Glessner House and Keith House, are the only two buildings that still stand today. Buildings shown in yellow were still standing in 1950, but all had disappeared by the 1980s.

The fact that the park is split roughly in half between properties that faced Prairie and Indiana provides an opportunity to discuss the dramatic difference between the development of the two avenues. In the late 19th century, Prairie Avenue emerged as Chicago’s most exclusive residential street - the “sunny street of the sifted few” as it was then known. Approximately 90 mansions lined the six blocks of Prairie Avenue between 16th and 22nd streets. Six of those spacious homes stood on the land where the park is today. Those homes were designed by the most prominent Chicago architects of the day, including Burnham & Root, Cobb & Frost, and John Van Osdel. Residents included O. R. Keith, George Wheeler, Charles Henderson, Charles Schwartz, Daniel Shipman, and Fernando Jones – all millionaire business owners who helped Chicago evolve into a world-class city in the decades following the Great Chicago Fire. 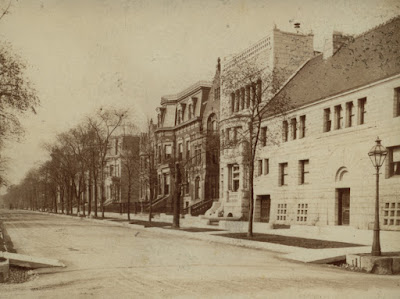 Indiana Avenue, although just one block west of Prairie Avenue, never achieved the same status. On the map, you can see the outline of fourteen houses facing Indiana that stood within the present park. One additional house, at the south end of the park site, does not show as it had already been torn down. Three additional rowhouses faced 18th Street, squeezed into lots that encroached upon the back yards of the homes at the corner. All of these homes were much more modest in size, and little is known of them, as their construction rarely warranted attention in the newspapers. 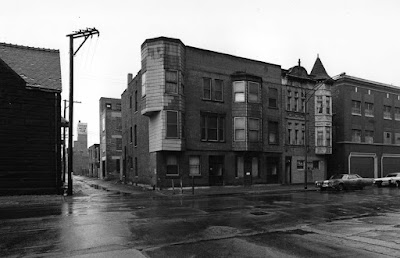 Why was Indiana Avenue so different? The answer is simple – from its earliest days, well before the Fire, the street served as an important transportation route through the south side. A horse railway line traveled south on State Street from Lake Street, turned east on 18th Street, and then south on Indiana Avenue, running as far as 31st Street. By the time streetcars were introduced, the line had been extended to 51st Street, where it then turned east, and continued to South Park Avenue (now King Drive), ending at the northwest corner of Washington Park. The streetcar line was discontinued in May 1953. 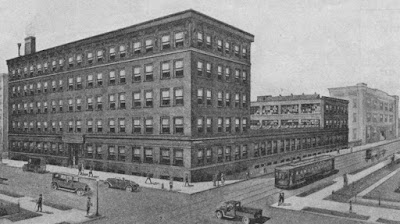 The entire neighborhood around the site of the Women’s Park began to decline in the first decades of the 20th century. The causes were numerous – its location close to downtown, the encroachment of industry, increased noise and pollution, and nearby nuisances including the “Levee” red light district. Indiana Avenue, with its more modest homes and convenient transportation, was impacted first. This can be seen on the 1911 map. At the south end, near 20th Street, two houses have already been replaced by a store and a post office, two others have been converted into a cigar factory, and one of the larger coach houses was occupied by peddlers. No such intrusions can yet be seen on Prairie Avenue.

The biggest change to Indiana Avenue took place in the late 1920s. In response to the rapid growth of the city in the preceding decades, planners decided to widen certain streets heading in all directions from downtown, establishing major arterial streets to handle increased motor traffic. Indiana Avenue, with its streetcar line already in place, was identified as a major thoroughfare heading south. The decision was made to increase its width from 66 to 100 feet by taking 34 feet from the lots along the east (park) side of the street. The plan was temporarily delayed with a suit filed by Eastman Kodak, which in 1905 had built a large plant right up to the lot line at the northeast corner of Indiana Avenue and 18th Street. Eventually, it was forced to sell the needed 34 feet to the city, chopped off the east part of its building and constructed a new façade. (A close examination of the building today shows the difference between the 1905 18th Street and the 1927 Indiana Avenue facades.)

By the late 1920s, the buildings on Indiana that stood where the park is today were run down houses, most having been converted to business use or boarding houses. As such, most were simply torn down when the street was widened. The photo below, an aerial shot taken from the tower of the R. R. Donnelley building in 1935, shows the park site and the general condition of the neighborhood at the time. Note the many vacant lots along Indiana with only scattered coach houses still in place, which could function independently for small business use.

The first comprehensive zoning ordinance was passed by the city in 1923. The entire neighborhood was not zoned residential, but for business and manufacturing. When new buildings were constructed on the east side of Indiana Avenue, they were built for these purposes. A modest two-story brick building (shown below) was constructed at 1901-1903 S. Indiana Avenue and through the years housed a variety of auto-related businesses, to compliment the automobile showrooms that lined Michigan Avenue one block to the west. It was torn down in the 1980s, its last years spent housing the “Coach House Livery” which operated horse and carriage rides on North Michigan Avenue. 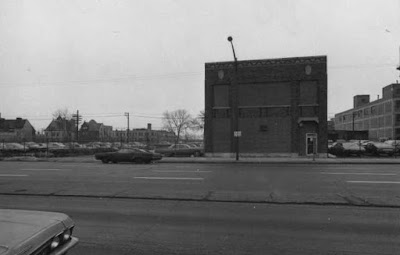 The present park fieldhouse (shown below) was completed in 1928 at the southeast corner of Indiana Avenue and 18th Street, occupying lots originally containing five houses. The architects were Hyland & Corse, a partnership of Paul V. Hyland and Redmond P. Corse. As originally designed, it contained several storefronts which housed the Indiana Restaurant and various shops; doorways faced both 18th Street and Indiana Avenue. Most of the building was used for manufacturing. Gus Manos started leasing the building just a few years after it was built and purchased it in the 1940s. For decades, he operated a company which became known as Swiss Products, pioneering the development of dehydrated gravies, soup bases, and flavor boosters for use in the restaurant business. (The company survives today at 4333 W. Division Street). 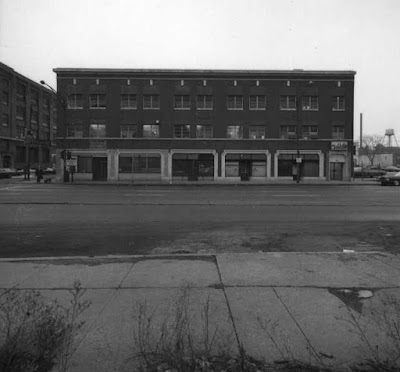 Famed architectural photographer Richard Nickel was instrumental in saving Glessner House in the 1960s. At that time, he also documented the neighborhood around the house, providing a rare glimpse of the future park site as it appeared at its low point – vacant lots or parking lots to accommodate the surrounding businesses. This article closes with several of those views. In the next installment, we will look at the initial concept for the creation of a park in the early 1970s. 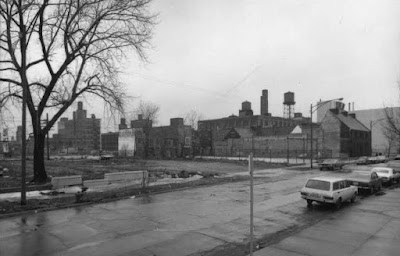 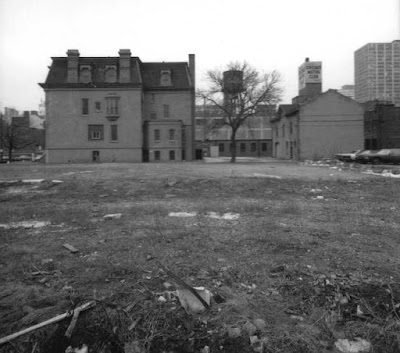 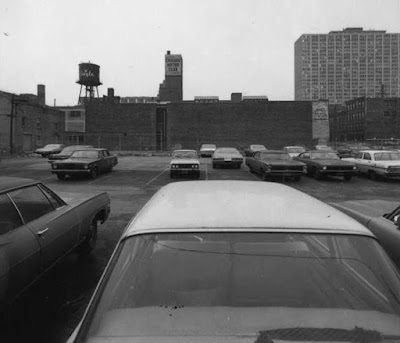 Looking south toward 1901-1903 S. Indiana Avenue; this is the current site of the Clarke House Museum. 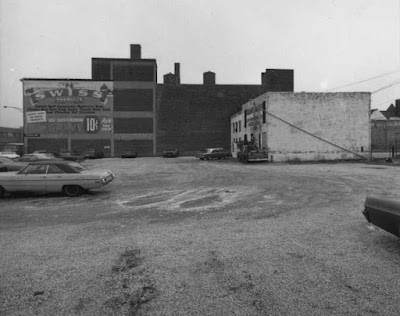 Looking north toward the Swiss Products building, 1801-1811 S. Indiana Avenue; this is now the park fieldhouse. 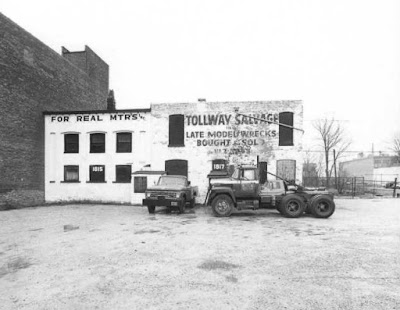 Surviving coach houses from 1813 and 1815 S. Indiana Avenue adjacent to the Swiss Products building. These were demolished in the 1970s. 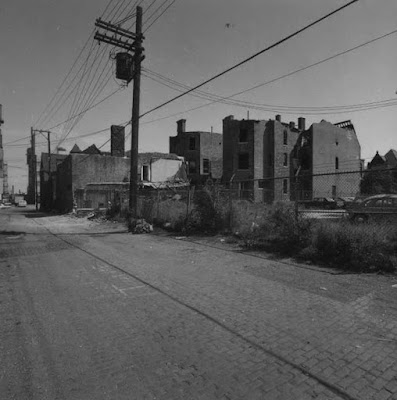 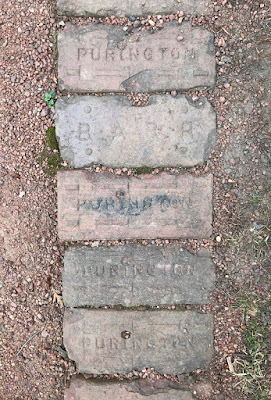 When the alley was removed for the creation of the park, the bricks were salvaged and reused to edge the gravel paths.
Posted by Glessner House Museum at 5:01 PM