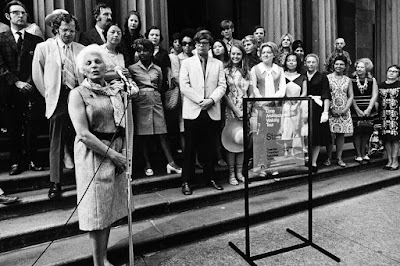 On Saturday, June 12, 2021, nearly 90 people gathered in the courtyard of Glessner House to celebrate a milestone in our history – the 50th anniversary of the docent program. Since 1971, volunteer docents have led tours of the house for hundreds of thousands of visitors, sparking excitement in architecture, history, and design. In honor of all our docents, past and present, we present a brief history of the early years of the program, which had a significant impact on Glessner House, the City of Chicago, and cities across the country.

Glessner House was saved from demolition in 1966 by a small group of architects and preservationists, including Marian Despres, who organized the Chicago School of Architecture Foundation specifically to purchase the building. As the organization worked on building repairs and repurposing the rooms into galleries and meeting spaces, it began hosting functions to introduce people to the house and raise awareness of its importance. Within a few years, people started showing up at the front door looking for a tour.

By the fall of 1970, the number of individuals seeking a tour exceeded the capacity of the staff, which at the time consisted of the newly hired, full-time executive secretary, Jeanette Fields, and her half-time assistant, Lynn Anderson. In response to the growing demand for tours, Fields and Despres developed a program to train volunteers in leading tours of the house – and beyond. 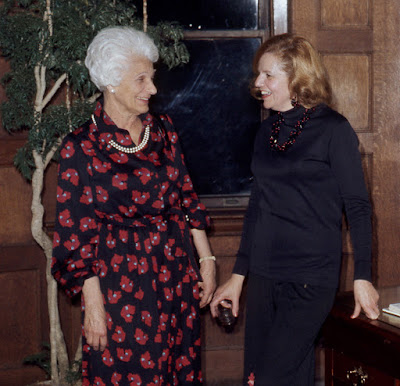 Marian Despres and Jeanette Fields
Jeanette Fields was well-suited to the task at hand. In 1968, she had been hired for a public relations position with the architectural firm of Fridstein & Fitch. She developed a series of bus tours of Chicago architecture, which were led by members of the firm. The offering was the first of its kind in the city, awakening residents to the architectural heritage around them, much of which was threatened with demolition at the time. The following year, when the American Institute of Architects held its international conference in Chicago to celebrate the centennial of the organization, Fields was asked to organize similar tours for attendees.

Marian Despres was the newly appointed chair of the Board of Directors when Fields came to Glessner House in 1970. The daughter of prominent Chicago architect Alfred S. Alschuler, Despres had grown up with a deep appreciation and understanding of architecture, and the impact local architects had in the development of what became known as the Chicago School of Architecture. She had volunteered as a tour guide during the 1969 AIA conference and saw how popular the architectural tours proved to be.

Additionally, Despres toured Manhattan with the well-known architecture critic, Henry Hope Reed, Jr. (later the first curator of Central Park). A study of docent programs revealed that although they were commonly done for museums and single historic sites, the idea of training docents to give tours using the whole city was new. Despres approached the newly formed Illinois Arts Council with the idea, and in January 1971, the Council provided a grant of $5,000 to develop the docent training program.

A steering committee was formed, consisting of Despres and Fields, Kenneth Englund, a former teacher on the staff of the Illinois Arts Council, and Barbara Wriston, director of museum education at the Art Institute of Chicago. Leading architects and architectural historians in Chicago were engaged as instructors, including Carl Condit, Fred Koeper, Wilbert Hasbrouck, and Paul Sprague. Docents would be trained to lead tours of Glessner House as well as the Chicago School buildings in the Loop. 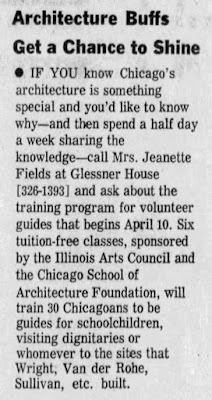 Notices of the training program appeared in early March and dozens of applications were received. After a vigorous interview process, 36 individuals were selected for the training which would be held on Saturdays over the course of two months (later expanded). Once certified, docents would be asked to give one-half day of service a week for a year. 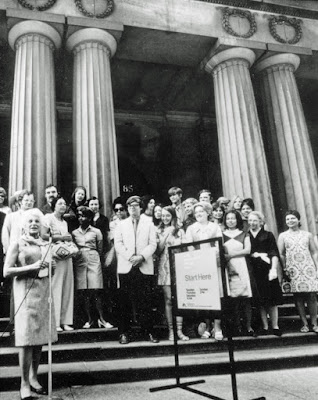 1971 class on the steps of the Chicago Public Library

Classes began on April 10 and consisted of lectures, tours, and a series of papers to be prepared. There were strenuous requirements in the areas of reading, writing, and speaking. A total of 33 students completed the course, graduating on the north (Randolph St.) steps of the Chicago Public Library (now the Cultural Center) on June 12, 1971. Fields, a pro at public relations, selected the highly visible site, and numerous reporters and TV cameras were on hand to document the historic event. David Stahl, a representative of Mayor Daley, gave the graduation speech. Immediately after the ceremony, Bob Irving, a graduate of the first class, led the first official walking tour of downtown buildings. 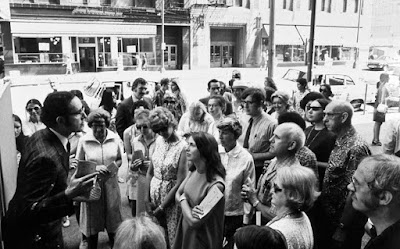 Tours of both Glessner House and downtown were offered four days a week; the cost was $1.00. By the end of 1971, nearly 3,000 people had taken a tour, with about half coming from Chicago, and the remaining half ranging from suburbanites to international visitors. 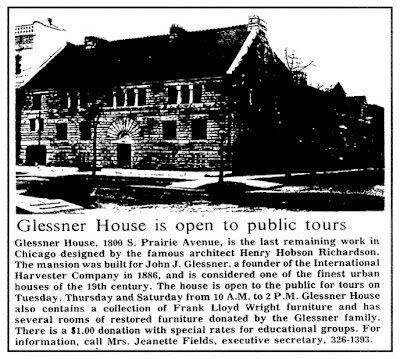 A docent council was created to plan and organize the tours consisting of architect John Thorpe, advertising copywriter Linda Legner, IIT professor Bob Irving, public school teachers Gwen Pittard and Barbara Wright Siebel, and John Ford. In response to the popularity of the two tours offered, the council immediately planned for expanded offerings. The first additional tour featured the Frank Lloyd Wright Home and Studio in Oak Park (this predated the formation of what is now the Frank Lloyd Wright Trust).

Name badge for Bunny Selig, a graduate of the 1971 class. Docents were awarded their "big button" after giving 20 hours of tours.

The second docent class numbered 44, selected from hundreds of eager applicants. At the graduation in May 1972, it was noted that the program was believed to be the “nation’s only architectural guide training course.” The model was soon copied by other cities including Boston, Philadelphia, Washington, D.C., and San Francisco, amongst others. By the time the fourth class graduated in April 1974, more than 200 docents had been trained, and a total of 17 walking and bus tours were offered in the city and suburbs. That year saw more than 5,100 people tour Glessner House, with another 5,000 attending events there. Over 13,000 people participated in the various architectural tours, and slide lectures were offered to countless students in Chicago Public School classrooms.

A special nine-week course, “Interpreting the Historic House Museum” was developed in early 1975, led by education director John Craib-Cox. This special course was in response to those who were interested in giving tours specifically of Glessner House. By that time, the Glessner family had returned many original furnishings, the first rooms were being restored, and the surrounding Prairie Avenue Historic District was being developed, under the guidance of Ruth Moore Garbe. The course examined house architect H. H. Richardson, the Glessner family, their collection of furniture and decorative arts, and the history and architecture of Prairie Avenue. After Chicago’s oldest building, Clarke House, was moved to the district and restored, docents were trained to give tours of that building as well. 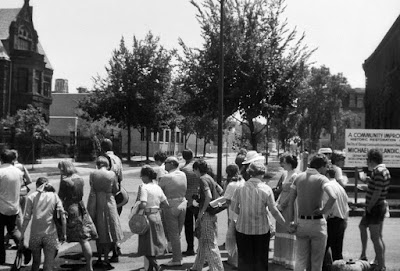 By 1994, the mission of the Chicago Architecture Foundation had expanded so dramatically that the decision was made to spin off Glessner House as its own entity, to focus exclusively on the house and its surrounding neighborhood. Many docents continued to give tours for both the Foundation (now the Chicago Architecture Center) and Glessner House, and new docents were trained at the house. An annual docent training class takes place each year over five Saturday mornings; for more information, click here.

A highlight of the 50th anniversary celebration of the docent program on June 12, 2021, was a tribute to Bob Irving, the one member of the original 1971 class that has given tours of Glessner House continuously for a half century. Friends and colleagues funded a special project to recreate one of the missing pieces of furniture in the house – the standing screen in the dining room – which will be installed this summer. To learn more about Bob Irving, including what former student (and President) Bill Clinton had to say about him in his autobiography, My Life, read this blog article from 2011, when Irving was honored for 40 years of service. 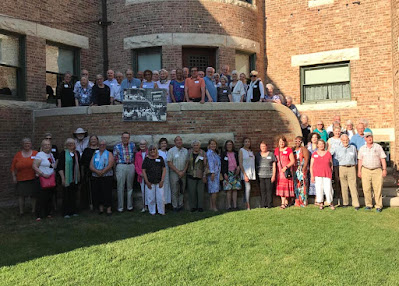 Docents, past and present, gathered at Glessner House, June 12, 2021

Fifty years after the graduation of our first class, docents continue to serve as our “front-line workers,” welcoming guests to Glessner House, and sharing our many engaging stories of the house, its family, and its preservation. We salute them as the docent program marks its milestone anniversary, and we look forward to their continued service to Glessner House in the years and decades ahead!