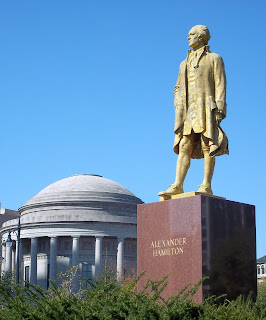 On Thursday April 21, hosted author Krista August, who presented a fascinating look at the portrait statues in ’s .  The park features 16 statues out of the 23 originally installed there.  Well-known pieces including Abraham Lincoln, Ulysses S. Grant, and William Shakespeare were discussed along with their lesser-known counterparts including the charming Eugene Field Memorial.  Of particular interest were the lost statues – Ludwig von Beethoven, Emanuel Swedenborg, and The Spirit of the American Doughboy to name a few, along with the bust of Sir Georg Solti (which isn’t really lost, but instead was relocated to Grant Park in 2006).
One of the most interesting stories surrounded the creation and installation of the statue of Alexander Hamilton, the great patriot who served as the first Secretary of the Treasury.   Located east of the intersection of Wrightwood Avenue and Lincoln Park West, the 13 foot high bronze statue is layered in gold leaf and stands proudly atop a red granite base.  The benefactress was Kate Sturges Buckingham, who lived most of her adult life at 2036 S. Prairie Avenue, just a few blocks south of the Glessner house.  Buckingham is well-known for the magnificent gift she gave to the city in memory of her brother Clarence – Buckingham Fountain in Grant Park – but few are aware of the gift of the Hamilton statue or her other gifts to the city.
When Kate Buckingham died in December 1937, she left the enormous sum of $1 million for the statue, which she envisioned for Grant Park, near the fountain memorializing her brother.  The piece was completed in 1941 by English-born sculptor John Angel but was placed in storage due to World War II.  Further complications in identifying an appropriate site resulted in the statue not being unveiled until July 1952, and not in Grant Park at all, but .   The cost of the statue was a mere $12,000, just over 1% of the amount she gave.  However the original setting cost over $500,000 to construct.  The dramatic memorial designed by Marx, Flint & Schonne consisted of a three-level plaza composed of limestone and black granite, with a red granite base supporting the statue.  Behind , a black granite pylon soared nearly 78 feet into the air.   In 1993, the memorial was disassembled and today only the red granite base remains beneath the statue. 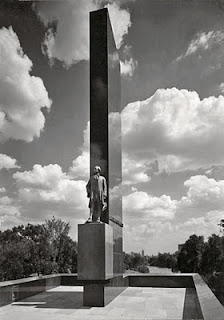 Buckingham never married, and as the last surviving child of Ebenezer Buckingham, a highly successful grain elevator owner and operator, her fortune was considerable.  In addition to the fountain and statue, she provided generously to many charities, but her great love was the Art Institute, which received numerous gifts of art and money throughout her life.  At her death, the majority of her $4 million estate, including her Prairie Avenue home, was bequeathed to the Art Institute.
To learn more about the Hamilton statue or any of the other portrait statues in Lincoln Park, visit www.lincolnparkstatues.com, where you can also order copies of Krista August’s book “Giants in the Park: A Guide to Portrait Statues in Chicago’s Lincoln Park.”
Posted by Glessner House Museum at 7:53 PM