The Glessners and the Chicago Symphony Orchestra 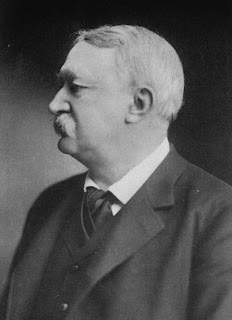 The history and success of the Chicago Symphony Orchestra is closely intertwined with the lives of John and Frances Glessner.  The founding conductor, Theodore Thomas (shown above) was an intimate friend of the couple for many years, and he consulted with them frequently on all matters relating to the orchestra.
Thomas first came to as a conductor in 1869 with his orchestra, having initially visited the city fifteen years earlier as a violinist in a small orchestra.  The November 1869 appearance marked the beginning of a long relationship that culminated in ’s reputation as having one of the very finest orchestras in the country.  Thomas and his orchestra returned in 1870 for a series of seven concerts.  In 1871, his orchestra was scheduled to perform on October 9.  They arrived in that morning to find the city in ruins from the Great Fire, but in subsequent years they visited on an annual basis, earning a respect from increasingly large audiences.
It is not known exactly how and when the Glessners and Thomas became acquainted, but by the time of formation of the orchestra in 1891, John Glessner was one of 50 guarantors who each provided $1,000 annually against losses (which were considerable in the early years). 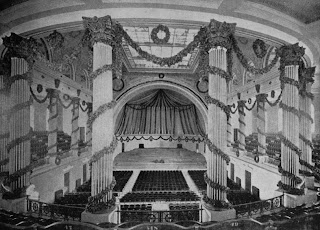 Thomas was appointed Music Director in the Bureau of Music at the World’s Columbian Exposition, and Music Hall (shown above) was constructed for his use.  The Fair proved a trying time for Thomas, who was inadvertently drawn into the politics of the fair, in regards to policies implemented to forbid the use of any instruments made by manufacturers who did not exhibit at the fair (including Steinway).  Thomas felt strongly that his guest artists, including Ignace Paderewski and Camille Saint-Saens, should be allowed to play the instruments of their choosing.  The Glessners were staunch supporters of Thomas throughout the ordeal, which resulted in his resignation in August 1893.  In time the whole episode was forgotten, and by May 1895, Frances Glessner headed up a group of thirty-six ladies in who presented Theodore Thomas with a beautiful silver punch bowl in thanks for his services in enriching the cultural lives of the residents of the city.
By 1898, when John Glessner was elected a trustee of the Orchestral Association, he had contributed over $7,200 to the orchestra, making him one of the four largest donors to date.  He remained a trustee until his death in 1936 and for the last twenty years of his life served on the Executive Committee.  Frances Glessner was one of the founders of the Chicago Chamber Music Society, an arm of the orchestra, and served on its executive committee for many years.
Away from , the connection between the Glessners and the Thomases continued.  After John and Frances Glessner completed their summer home, The Rocks, in , the Thomases purchased land nearby and constructed their own summer home, which they named Felsengarten.   It was here that Theodore Thomas could truly relax, far removed from the heavy demands of the orchestra.
Members of the orchestra frequently entertained at the Glessner home, providing music for dinner parties and meetings of the Monday Morning Reading Class.  On more than one occasion, Thomas brought musicians by surprise to the Glessner house for a birthday or anniversary.  The Glessners reciprocated by providing wonderful receptions and dinners for the musicians, and on more than one occasion hosted the entire orchestra for a sit down dinner.  One of these times was in January 1913, when the members of the orchestra were able to view the meticulously executed miniature orchestra that Frances Glessner Lee had made herself, a birthday gift to her mother. 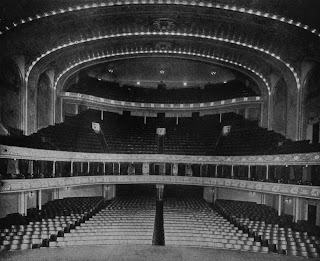 In 1902, when the time came to realize the long-held dream of Theodore Thomas to construct a permanent hall for the orchestra, John Glessner, along with Daniel Burnham and Bryan Lathrop, held the title for the newly purchased property on Michigan Avenue.  These three men, along with seven other trustees, carried the entire purchase price, by cash and their personal notes, until 1905, when the Association secured a loan for the completion of orchestra hall.  The Glessners were instrumental in raising a significant portion of the funds needed to construct the hall, which opened in December 1904.  They were assigned Box M in the new hall (shown above), directly behind the conductor’s podium, and it was reserved for their exclusive use until their deaths in the 1930s.
Less than one month after the opening of the new hall, Theodore Thomas died.  His wife and the Glessners were the only ones at the bedside.  After his passing, George Glessner was summoned and took post-mortem photographs, presumably given to the widow.  Soon after the funeral, Thomas’ widow Rose presented the Glessners with his baton and a preserved palm frond from his casket, mementoes of their long friendship.  (The pieces remain on view today in the museum, in the hallway outside the master bedroom).
The relationship with the orchestra remained close under Thomas’ successor, Frederick Stock.  On , Stock premiered his Symphony in c minor, which was dedicated to the Glessners.  Much of the piece in fact had been written while Stock was a guest of the Glessners at The Rocks.  Their support for Stock was equally as strong as it was for Thomas, especially during the period of the first World War when Stock’s allegiance to was (falsely) questioned.
John Glessner died on .  In the program for the concert three days later, a full page tribute to Glessner included the following statement, “To no one man has The Orchestral Association been more beholden.  He was one of the small group of men who in the Association’s first years of struggle were loyal in their support and generous in their gifts.  Since 1898 he has served as a Trustee and by his constant attendance on meetings and his sound judgment has brought much needed help to his associates.  He and his devoted wife while she lived were always in their box to delight in the music their generosity made possible, and in their hospitable home men of the Orchestra and their musical friends found frequent entertainment.”  On February 11, the CSO concert included Richard Strauss’ tone poem “Death and Transfiguration” as a fitting tribute to this ardent supporter of the orchestra.
Posted by Glessner House Museum at 7:38 PM