Novel on Prairie Avenue to be released in 2012 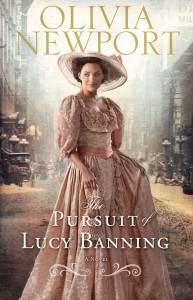 Prairie Avenue is due to receive some well-deserved attention with the release of a novel, The Pursuit of Lucy Banning, in June 2012.  The volume, book one of three in the “Avenue of Dreams” series, has just been added to the online catalog of the publisher, Fleming H. Revell.
The title character in the series, Lucy Banning, was born on 71 (the same week as George Glessner, and also the date of the Great Chicago Fire), and is turning 21 at the time the novel opens.   Banning has enjoyed the privileges of a Prairie Avenue upbringing, but yearns for more than a life of ease and the obligatory marriage to a banker that her family expects.  Although the story is fictional, it is deeply rooted in the history of Prairie Avenue, with countless references to the actual people who lived on the street during its heydays in the 1890s.  Just like Arthur Meeker’s fictional Prairie Avenue, which was published in 1949, the novel brings to life the “sunny street that held the sifted few” during one of the most remarkable periods in ’s history, including the World’s Columbian Exposition.
The series was conceived by Glessner/Clarke House docent Stephen Reginald in collaboration with author Olivia Newport.  Reginald did the research (including frequent inquiries to the Glessner house), and did the writing and character development.
A release party and booksigning will be held at the museum in June 2012.  If you are a fan of Prairie Avenue and history, this novel is sure to appeal to you.
For more information, click on the link below to The Pursuit of Lucy Banning on the website of Revell (now a division of Baker Publishing Group) at:
http://www.revellbooks.com/ME2/Audiences/dirmod.asp?sid=0477683E4046471488BD7BAC8DCFB004&nm=&type=PubCom&mod=PubComProductCatalog&mid=BF1316AF9E334B7BA1C33CB61CF48A4E&tier=3&id=0492A9D0F9034A40B5A31CDCCA5CF867
Posted by Glessner House Museum at 10:50 AM