John and Frances Glessner and their family occupied two houses in before moving into their Prairie Avenue home on .  This week, we look at their second home, located at the northeast corner of Washington and Morgan Streets, which they occupied from 1875 through 1887.
From John Glessner’s The Story of a House we learn:
“We wished to possess our own home, and bought on Washington Street the house that had been built by Sylvester Lind and occupied by him, then sold to Jacob Beidler, who lived there some years, and sold to me.  Both of these families were well known in at that time.  This house was of brick, on the street corner, and the grounds extended for half the block frontage on both streets.  Our neighbor, Thomas M. Avery, with a similar lot next east of this, joined with us to remove the dividing fence.  His house on the corner of Washington and Sangamon Streets, close to , and ours on Washington and Morgan Streets, close to Morgan, left one glorious lawn between, all grass, with bright flowers at the borders, and the only division visible was a big splendid elm tree that stood just inside of my line.  At the Morgan Street side was a great pear tree, the largest I had ever seen, and several large maple trees.  Again the house was made charming inside.  was born there.  It really was a cross to leave that place, but the changing neighborhood and the demand for a little more room for you growing children made it necessary.”
In a tribute to his late wife that John Glessner wrote in 1932, he adds:
“I bought the brick house 261 , corner of Morgan Street, and remodeled it, and it was nearly ready to be occupied.  The lot covered one half the block frontage on , and my neighbor, Thomas M. Avery, lumber merchant and President, Elgin National Watch Company, owned the other half.  We removed the dividing fence between the two lots, and if I do say it, we had the most beautiful lawn in .  (Here later my children played with his grandchild, and it surely was a pretty sight.
“While living on Washington Street Mrs. Glessner arranged a series of meetings of ladies in our library and parlor to listen to talks and readings about the latest books by scholars and experts, which were well attended and interesting and became the nucleus and forerunner of the Monday Morning Reading Class, so that that afterwards vigorous society had its origination and beginning then and there.
“It was in this house our daughter was born, on , and named for her mother.  Considerable illness of the mother followed.  She was not permitted to nurse the baby and we had to provide a wet-nurse.  With a wet-nurse in it, one cannot control her own house.  She is at the nurse’s mercy.  It was in this nurse’s reign that I first saw my lady really angry – perhaps the only time.  In handling the child the nurse struck her head against the chandelier – such an utterly unnecessary thing that there is no wonder that anger blazed.” 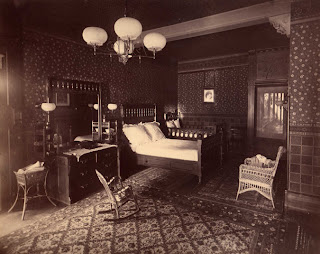 It was in 1875 that the Glessners first met Isaac Scott, and most of the Scott-designed furnishings now on display in the museum were made for the Washington Street house.  The two mantelpieces on display in the Isaac Scott exhibit were made for the master bedroom and library.  When the house was sold in 1887, the Glessners removed the mantels and reinstalled them in their summer home, The Rocks.  Scott also designed the new and much larger coach house as seen in the photo below. 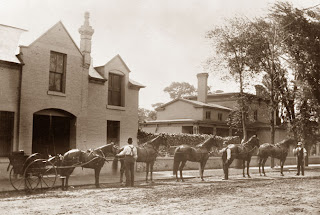 It is interesting to note that one of the motivations behind leaving their Washington Street home was the “changing neighborhood.” Years later, the Glessners would see Prairie Avenue undergo enormous change as well, but at that point in their lives, the opted to remain in their Richardson-designed home for the remainder of their days.  The Washington Street house was eventually torn down and replaced by a large brick loft building which remains on the site today.
Posted by Glessner House Museum at 2:00 PM