Later this week, heads of state from around the globe will arrive in for the NATO Summit.  The two-day meeting will be held at McCormick Place on Sunday May 20 and , just a few blocks south of .  In light of all the media attention on the anticipated protest march which will head south along Michigan Avenue from the Petrillo Bandshell to McCormick Place on Sunday, we look back to another protest and march held on Thanksgiving Day in 1884 along and Prairie Avenues that was directed toward residents of the neighborhood.

Unfurled for the First Time in by Discontented Proletariats

“The Disinherited Class of the Earth” Denounces the Capitalistic Turkey-Eaters

And Parades the Heart of the City, While the First Regiment Has a Street Riot Drill

THE CURSE OF POVERTY:  FLUNG WITH RECLKLESS IMPARTIALITY AT WHO HAD CAUSE FOR THANKSGIVING

One thousand men stood shivering in the drizzling rain in Market square yesterday afternoon in answer to a call made upon the Socialists to meet and express their reasons for not giving thanks to the Lord on the National day of thanksgiving.  Around the speakers’ stand, which consisted of half a dozen empty chicken crates plied one on the other, were grouped banners and rudely-constructed shields bearing such inscriptions as “Our capitalistic robbers may well thank their Lord that we, their victims, have not yet strangled them”; “Thanks to our ‘Lords,’ who have the kindness to feast on our earnings”; “Shall we thank our ‘Lords’ for our misery, destitution, and poverty?”; “The turkeys and champagne upon the tables of our ‘Lords’ was purchased by us”; “Why we thank? Because our capitalistic brothers are happily enjoying our turkeys, our wines, and our houses.”

While a band was playing the Marseillaise Hymn, a young man, whose bloated face and badly-worn pantaloons suggested mightily vigils in groggeries, created some excitement by mounting the chicken-coops and yelling: “Boys, I ain’t a-eatin’ no turkey today, and I’m a-goin’ to call this ‘ere meetin’ to order.  We want guns, we do, G-d d—n us, and we want to fight like men and burn ---.”  At this point the wildly-swinging arms and dilapidated pantaloons disappeared, the crowd howled and the fiery orator was unceremoniously hustled out through the crowd and told to go back to the bridewell, where he belongs. 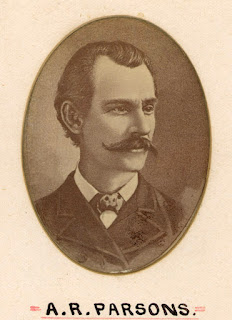 “Men of the disinherited class of the earth,” said Mr. A. R. Parsons, as he called the meeting to order, “we are assembled here on this day of National thanksgiving to curse the capitalistic robbers who are feasting on the blood of our wives and children.  We are justified in cursing these vipers by the Bible which they hurt at us with so much unction,” and he quoted from the Gospel of St. John and from St. James and from Solomon’s wise sayings to prove his assertion.

Mr. C. D. Griffin’s turkey had evidently fallen short of his expectations, for he occupied ten minutes in assailing the weight system in vogue in .  “There is but one remedy for all our evils,” he concluded: “we’ve got to strike at property; it looks like a sacrifice to destroy all those fine buildings but it must be done.  We can’t secure justice in any other way.  No man should have more than he can use – one house, one store, one suit of clothes; if we find them vacant it is our duty to occupy them or destroy them as circumstances dictate.”

While Mr. Griffin was speaking, a body of men from the , carrying two red and two black flags, drew up in front of the stand, and at the cheers of the spectators.  “This is the first time in that the black flag of hunger has been carried in the streets of a city.  Shall we submit to being starved?  No, we will flaunt these black emblems of want and despair in the faces of the rich robbers as they are eating our turkey and drinking our wine.” 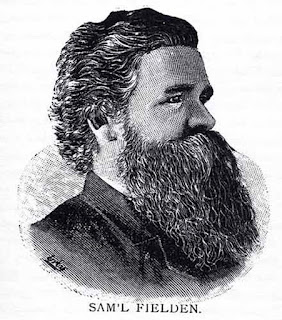 Mr. Samuel Fielden was the next speaker.  He had got no further than “Fellow Christians,” when he was loudly hissed, and in broken English from several directions came the sentiment “Don’t insult us.”  Mr. Fielden changed his tack, and during his rabid speech didn’t believe in God, man, or the Devil.  “When I was a boy,” said he, “my mother taught me the Lord’s Prayer, which I believe, beings something like this: ‘Our Father which art in Heaven.’  [Derisive laughter.]  He is in Heaven yet, and evidently intends to stay there.  We have no authentic record that He has ever visited this earth.  He knows when he has a good thing, and intends to hang to it.”  This bit of profanity tickled the crowd immensely.

Some very pronounced Socialistic resolutions were read and adopted.  The most striking clauses being that property rights should no longer be maintained or respected; that such useless things as lawyers, insurers, brokers, jailers, police, politicians, armies, and navies should be deprived of their employment; that no man shall pay you anything or receive pay for anything, or deprive himself of what he may desire; that one suit of clothes is enough for any man; that forcible opposition to the opening of all stores, storehouses, vacant tenements, and transporting property for the good of the people in general should be dealt with summarily, “in order to save bloodshed.” 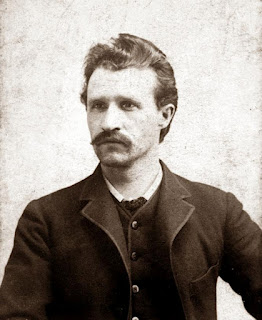 Mr. August Spies complained that when the Socialists asked for bread, Carter Harrison appointed 400 new policemen to drive them from their homes and hovels.

A speech in German by Mr. Schwab concluded the speech-making, and about 500 men fell in line behind the red and black flags and marched through Michigan and other avenues, where the aristocracy is supposed to dwell, in order, as they put it, “to make the voice of hunger heard.”  An inconsistency, apparently unnoticed by the Socialistic leaders, was that the men carrying and surrounding the black flags that “cry for bread” were all well-dressed, sleek, and fat, and in far greater danger of gout than of starvation.

The men present were in great part Poles, Germans, and Bohemians.
Posted by Glessner House Museum at 1:03 PM