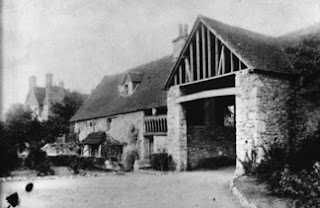 On we posted an article regarding a tithe barn at Abingdon Abbey in Abingdon, .  The building, depicted in a photograph owned by the Glessners at the time they first met with architect Henry Hobson Richardson in 1885, became a primary inspiration for the architect who took the design of the structure and made it the “keynote” of the Glessners’ new home on Prairie Avenue.

In May 2012, members of the Abingdon Area Archaeological and Historical Society (AAAHS) found the blog article and started an interesting communication with the museum.  Unaware that the building depicted in the photograph had served as the inspiration for the internationally recognized Glessner House, they set out to find out what they could about the structure.

Most interesting of all is the fact that the building is in fact NOT the tithe barn at the Abbey.  That structure, which was converted to an Anglican church in the 1960s, has similar lines but is clearly not the same building.  Further investigation uncovered the actual building depicted in the photo, which remains standing today.  The building’s historic function was that of a carriage entrance to the stable block for the Cosener’s House (partially visible at far left), the residence of the abbey or “cuisenier,” the person at the Abbey responsible for the provision of food.  To the left of the carriage entrance was the gardener’s cottage, which was most likely rebuilt on the site of a derelict abbey fulling mill after the dissolution of the Abbey. 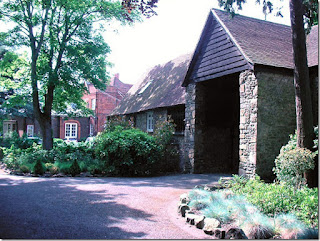 Several members of the AAAHS helped unravel the mystery including Judy White, Michael Hocken, and John Foreman, who provided the photo of the building today.  A YouTube video showing the building was posted recently and may be viewed at http://www.youtube.com/watch?v=wceNjba6kSs

As an interesting side note, the Cosener’s House, located on an island across the River Thames from the carriage entrance structure, is operated today as a conference center with accommodation by the Science and Technology Facilities Council.  Visit http://www.stfc.ac.uk/About+STFC/44.aspx for more information.

The lingering question that remains unanswered is how the Glessners came into possession of their photograph of the building, and why they placed it on display in their home.  They never visited the site and in fact never visited at all, focusing mostly on , , and during their one and only trip to in 1890.  The original photograph owned by the Glessners (with its ink blot at the corner added by Richardson during the time he had it in his possession) is not in the museum collection today, so it is unknown if any notations existed which might yield a clue to the source of the photograph that served as the keynote of the house we know today as Glessner House Museum.
Posted by Glessner House Museum at 3:40 PM