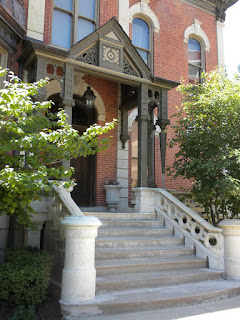 On , will hold its 15th annual fundraiser, A Walk Through Time.  This walking tour explores the interiors of the historic mansions in the Prairie Avenue Historic District.  Featured are eight privately owned buildings, in addition to the Glessner and Clarke house museums, and Second Presbyterian Church, with its significant collection of Tiffany windows.  The tour runs from 1:00 to 4:00pm and costs $50 per person.  For more information or to make reservations, call .

One of the featured properties on the tour is the Calvin T. Wheeler House at 2020 S. Calumet Avenue.  The brick style house was built for Wheeler, a banker and member of the Chicago Board of Trade in 1870.  It was designed by architect Otis T. Wheelock.  In 1874, Wheeler sold the house to Joseph Kohn, a prominent Jewish wholesale clothier.  When his family sold in the early 1900s, the house was acquired by a publishing company and converted to offices.  Later, it was purchased by the Murphy Butter & Egg Company for use as a warehouse.  By the 1900s, it was sitting vacant, deteriorated, and threatened with demolition.  The current owner, Debra Seger, acquired the property in 1997 for just $10,000 and spent the next eighteen months renovating and restoring the building.  In 1999, she opened the house as the , a boutique hotel with eleven guest rooms and suites.  It is the last surviving mansion on Calumet Avenue and was designated a landmark in 1998.

The house is an excellent example of the style, with its trademark third-story mansard roof.  The elaborate brackets and cornice at the roof line were recreated during the restoration based on a historic photograph.  The two-storey copper bay window was not original to the house and was probably added by the Kohns in the 1880s. 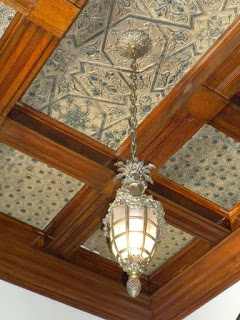 Upon entering the house, guests would have seen the elegant entry vestibule, which still retains both its original mosaic tile floor and beautiful beamed ceiling with Lincrusta panels set in between. 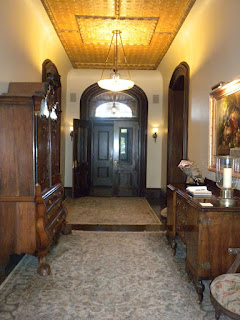 The first floor features a gracious center hall plan which would have provided beautiful cross-ventilation in the days when the shoreline was just a few hundred feet to the east.  The tall ceilings and heavy mouldings are typical of the style.  The most dramatic feature of the hall is the original ceiling which was meticulously stripped of multiple layers of paint and restored to its original colors.  The flat sections are Lincrusta, the deeper trim portions are cast plaster.  To the north of the hall is the staircase with its original hand rail in the Aesthetic style, influenced by Japanese design.  The stairway is illuminated by a large skylight filled with beautiful leaded glass added during the restoration.

The parlor features an antique mantel from that is much older than the Wheeler house itself.  Pocket doors separate the room from the adjacent dining room, and would have been used by the live in staff to close off the dining room while it was being set before dinner and cleared after the meal was complete. 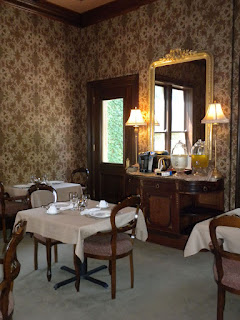 The dining room features an intricate beamed ceiling with Lincrusta panels at the four corners.  The wallpaper is not original but is appropriate to the period.  During the time the house was used by Murphy Butter & Egg, a large loading dock surrounded this part of the house, eliminating all the windows.  Across the hall from the dining room is the current hotel office which originally served as the butler’s pantry where food would have been brought up from the basement kitchen by way of a dumbwaiter.

The grounds have been extensively landscaped providing a beautiful and unexpected oasis of green so close to downtown and McCormick Place.  Starting June 6 and continuing every Wednesday through October 31, the yard will be the site of the weekly Wheeler Mansion Market, a vibrant European-style gathering of local farmers, artisan food producers, and independently owned and operated businesses including an artfully curated selection of jewelry, furniture, art, and handcrafted products by local designers.  The Market will also feature live entertainment and prepared food vendors.  will be offering complimentary “twilight tours” of Prairie Avenue and the Museum at 5:00 and 7:00pm each week.  For more information on the Wheeler Mansion Market, visit http://marketatthemansion.wordpress.com/about/
Posted by Glessner House Museum at 4:56 PM