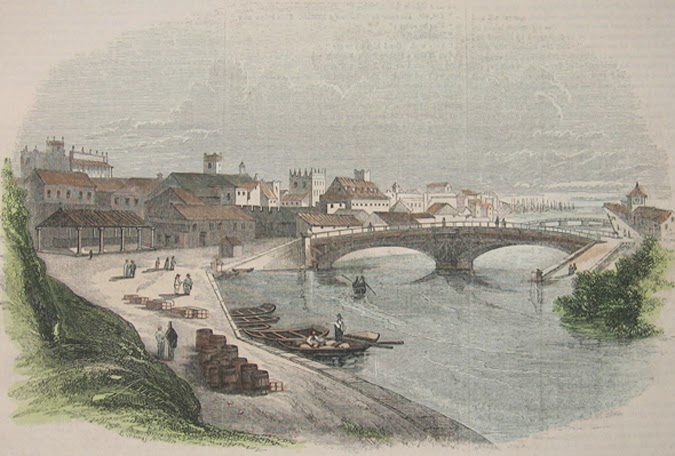 Monday we had early coffee, walked to the station about 6:30 and went by rail to Matanzas, about 80 miles.  Matanzas means slaughter houses. 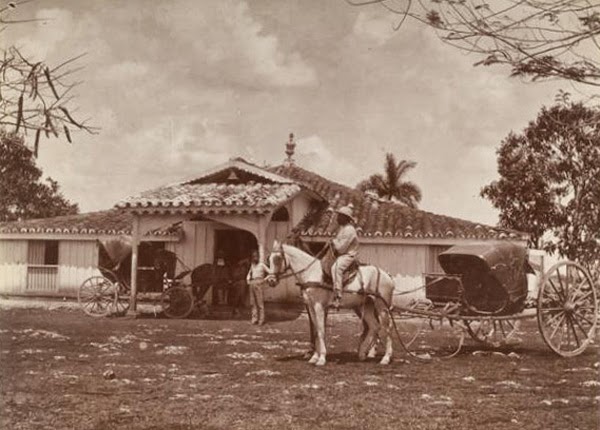 Volante (at right) at Bellamar Caves

Found volantes waiting for us – a cart with two high wheels and long shafts, with the body hung on leather springs and entirely in front of the axle, so that they ride airy, smoothly and easy.   One horse is between the shafts, and the driver rides the other hose and leads the first.  It was a pleasant sensation, this volante ride. 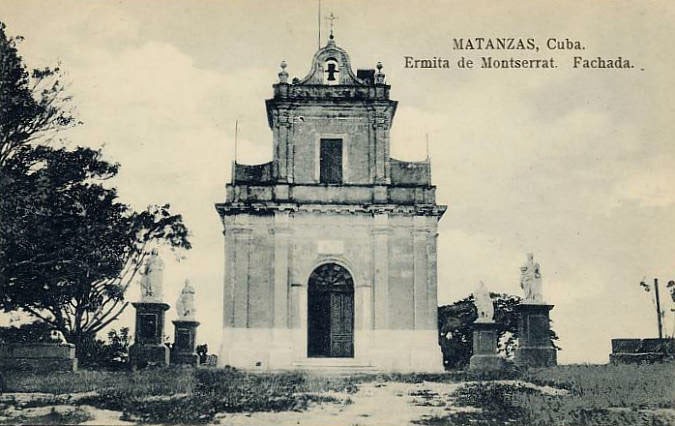 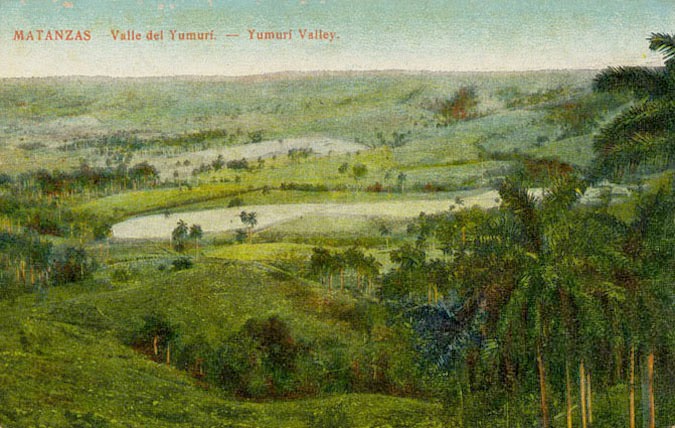 We had a delicious and apparently clean breakfast at the hotel El Louvre.  Then we drove to the church of Montserrat and saw from the mountain the beautiful valley of Yumuri.  The little church was presented to this community by four provinces of Spain and contained at the altar a representation in cork of the mountain in Spain, all very crude.  Outside were four wooden statues representing the four provinces and when we remarked how unsubstantial, our guide said “when these decay they will be replaced.”

After that we drove back through the town, past the seashore to the caves of Bellamore, where there were beautiful stalactites and stalagmites, but in other ways and in extent it was not nearly so impressive as our Mammoth Cave, and the temperature inside was very warm. 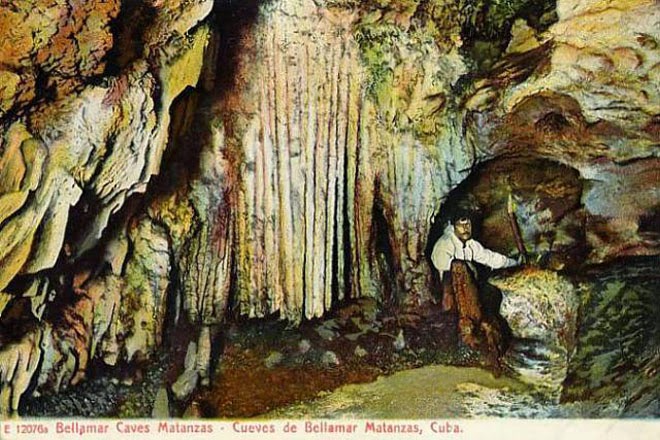 NOTE:  The Caves at Bellamar are one of the oldest tourist attractions on the island of Cuba, and are estimated to be 300,000 years old.  They were discovered in 1861 by a slave who lost a tool between the rocks.  One of the feature attractions at the caves is a rock formation known as the Mantle of Columbus with a stalagmite 40 feet long.

Tuesday morning we left Fanny and Emma in the hotel and with a guide to ourselves went shopping again, but again found the attempt unsatisfactory – we couldn’t find anything to buy.  Apparently the manufacturers of the place are Panama hats and cigars, and we didn’t want either.  Went through the market and saw all sorts of fruits, vegetables and articles for sale.  There was a tasteless sort of fruit called sapodilla, about as large as our walnut, with two seeds.  Saw some beautiful tiles, mostly white with blue figures, but these were in buildings, and all we could find for sale were weak in design.

At 3 p.m. Dr. Vigil called to take us to Morro Castle – we three and the Doctor.  Took us across the bay in one of the officer’s boats, manned by six oarsmen and the man at rudder, besides the Doctor’s “soldier” or servant, who was constantly in call for orders. 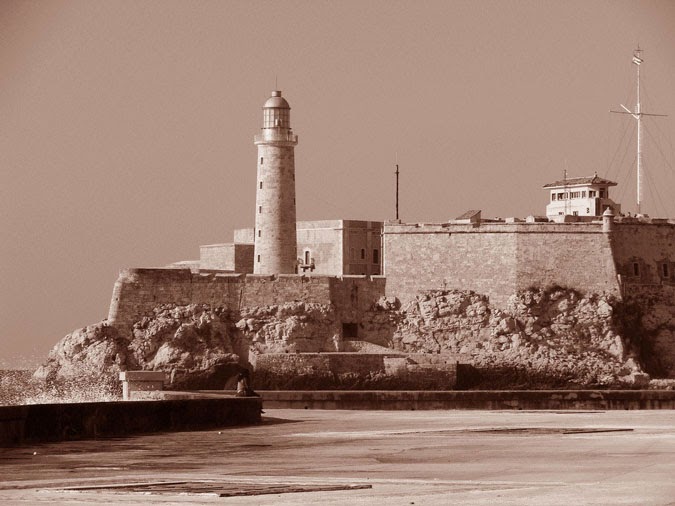 NOTE:  Morro Castle, the full name of which is Castillo de los Tres Reyes Magos del Morro, is named for the three magi, and was built in 1589 by Spain to guard the entrance to the bay at Havana.

He first took us to call on the wife of the Captain of the Artillery.  Her house was interesting, but with little furniture and none of that upholstered.  She had two very fine Chinese jars and two large blue jars, besides table china and silver in large quantity and beautiful, and she took great pride in showing it.  The Captain was a pure Spaniard and the wife a Cuban from one of the wealthiest families.  Her baby was brought in for us to see while she put on her lace mantilla and black gloves to walk with us to the Castle.

The Doctor showed us the Castle, the light house tower, telegraph and signal office etc. and brought us back.  During dinner and through the afternoon we had great sport making ourselves understood through a little French and English and an occasional Spanish word, and the telegraph officer suggested we were speaking Volapuk.

NOTE:  Volapuk was a constructed language, created a decade earlier by a German priest who said he had been told by God in a dream to create an international language.  By 1889, there were nearly 300 Volapuk clubs, 25 periodicals, over 300 textbooks in 25 languages, and one million adherents.  It was largely displaced by Esperanto.

After dinner, through the Doctor’s courtesy, we went to call on El Senor and Senora Medina Plaza del Crito, and their two young lady daughters.  These people were in good society in Havana and we were told their home was typical of Havana homes.  Their apartments were over a furniture store; we went up the usual marble stairway and the doctor called to them as we went up so that when we reached the second (their parlor) floor, the family was at the head of the stairs to meet us.  We stopped a few minutes in the marble floored and wainscoted hall to remove hats etc. and then went into the parlor, also floored with marble, with a few rugs, some rocking chairs and sofas, a table, grand piano, etc. and engravings on the walls.   A married daughter was expected to call during the evening and give us some music and we were told she was the best pianist in Havana, but Cuban ladies never go out when it rains or is damp, and a rain coming up, we were disappointed by not seeing here.  A very heavy rain came up while we were calling and though the shutters were all closed the rain beat in somewhat.  The two young ladies and Frances played.

We did not go to the theatre for there were only variety performances, but people often buy tickets for one act only.  How they get these people out at the conclusion of the act we didn’t learn.  One lady who had traveled a great deal said that standing on the upper floor and looking over the roofs and trees the appearance was as Egypt, but in the streets the appearance was of Italy.  The building material soon takes on the look of age and the dull yellow and blue and gray walls, barred windows, narrow and dirty streets etc. were all foreign.  Havana was noisier, and dirtier, and with more vile odors than any other place we had ever been.
Posted by Glessner House Museum at 12:12 PM