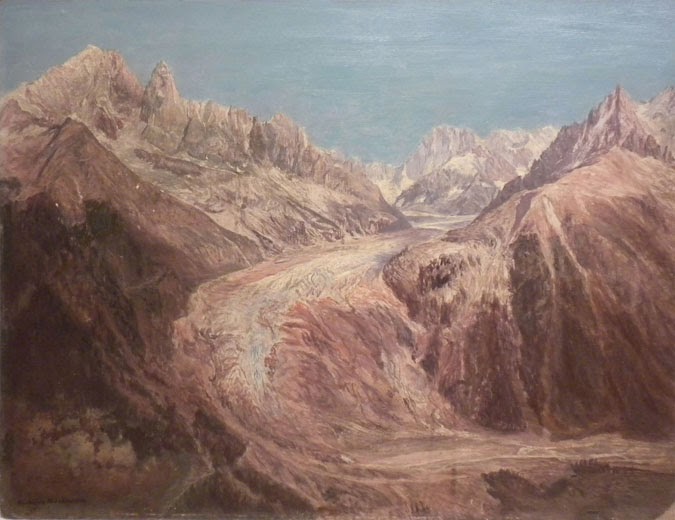 The museum recently placed a gouache painting on display that has been in storage since it was donated by the Glessners’ granddaughter Martha Batchelder in 1989.  The painting, showing a scene in the Alps, was created by Gustavus Frankenstein, an Ohio artist and friend of Frances Glessner’s family, the Macbeths.  It now occupies a place of honor in the courtyard bedroom.

Gustavus Frankenstein, was born Gustav Ludwig Tracht on January 23, 1828 in Hesse-Darmstadt, Germany, the fifth of six children of Johannes and Anna Tracht.  In 1831, the family immigrated to the United States and the story nearly ended there for they were shipwrecked off of the coast of Virginia.  They survived and were fortunate in being able to save nearly all of their valuables.  An “exceedingly kind and wealthy family” took in the family, but later in the year they continued their journey west to their future home, Cincinnati, Ohio.  The father, who changed the family name to Frankenstein upon arriving in the United States, was a teacher and professor of languages, and later became a talented cabinetmaker. 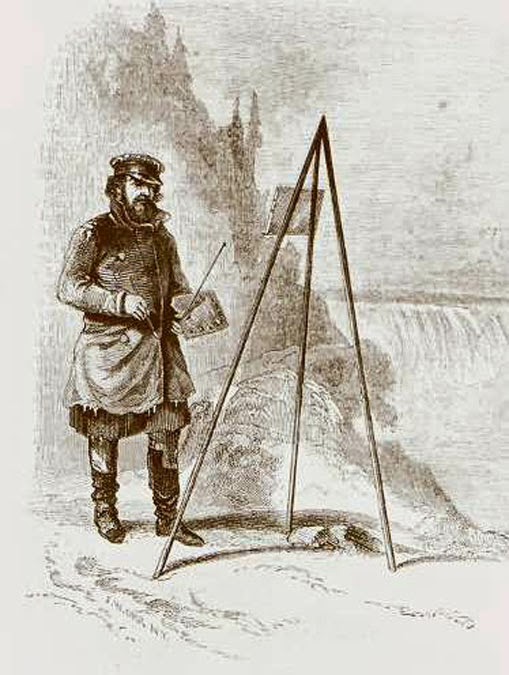 As the children grew to adulthood, they all showed significant artistic talent, the most prominent artist being Gustavus’ older brother Godfrey.  In 1844 Godfrey visited Niagara Falls for the first time and was so moved by the grandeur and beauty of the place that he spent much of the next 22 years depicting the falls during every season of the year on huge canvases.  During the early 1850s, Gustavus assisted his brother in this undertaking.  These paintings were eventually formed into an immense panorama which was rolled from one spindle to another while a lecture was read, and exhibitions were held in Cincinnati, New York, and Philadelphia. 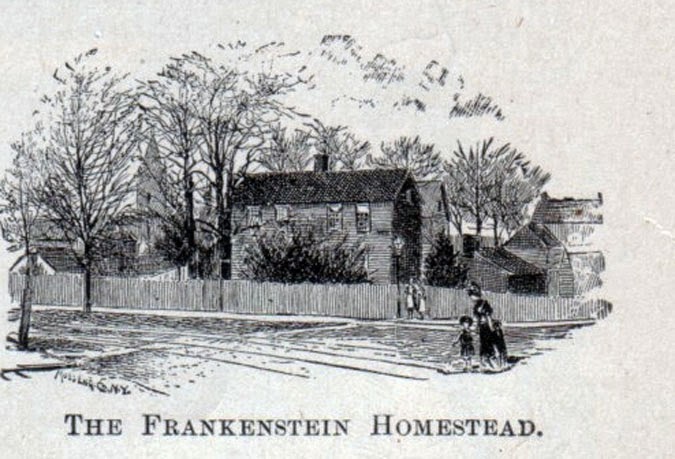 The family moved to Springfield, Ohio in 1849 and by May 1853 Gustavus had moved there as well, where he and his brother taught art classes at the Springfield Female Seminary.  One of Gustavus’ students was Helen Macbeth, Frances Glessner’s older sister.   (A number of her canvases, including several depicting the Glessner summer estate, The Rocks, in New Hampshire, will go on permanent exhibit at the museum on April 9, 2014).

Milky Lake, Alps (1867-1869); The back reads:
Painted originally from Nature by Gustavus Frankenstein
and Given to Miss Helen Macbeth (private collection)

In 1867, the two brothers traveled to Europe, spending a season in England painting scenes of the countryside.  They then travelled through the Alps creating numerous canvases including the one now in the collection of Glessner House Museum.  Upon their return to London, “it was acknowledged that Mont Blanc and Chamouni Valley had never before been painted with such power and beauty.”  They returned to the United States in 1869, and Godfrey died four years later.

Gustavus Frankenstein is best remembered today for his contributions to the field of mathematics.  In 1875, he discovered a perfect magic cube of order 8, which was announced in the March 11, 1875 edition of the Cincinnati Commercial in an article entitled “A Big Puzzle: New and Marvelous – Magic Cubes – A Great Curiosity – Magic Cubes of 8 – Composed of 512 Numbers, Including Every Number from 1 to 512, and Consisting of Thirty Different Equal Squares and 244 Different Equal Rows – Common Sum 2,052.”  That same year, he published a book about his discoveries entitled Magic Reciprocals: Involving a New, Wonderful and Beautiful Theorem.

By the late 1870s, Gustavus left Ohio for Bermuda (or the Bahamas, or the Sandwich Islands, accounts are not consistent), but returned to Springfield in 1880, where he wrote numerous stories, including several for St. Nicholas, An Illustrated Magazine for Young Folk.  One of his articles was “TheLittle Boy and the Elephant” considered by some to be an inspiration for Edgar Rice Burroughs character of Tarzan.  Gustavus also became adept at the repair of clocks and watches, and called himself a “horologist.” 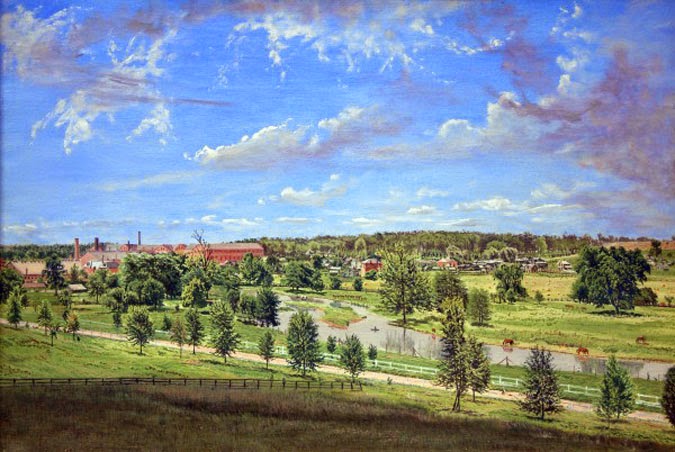 His last paintings were a series of three of the nearby countryside for Ross Mitchell, a Springfield businessman, completed in 1891. 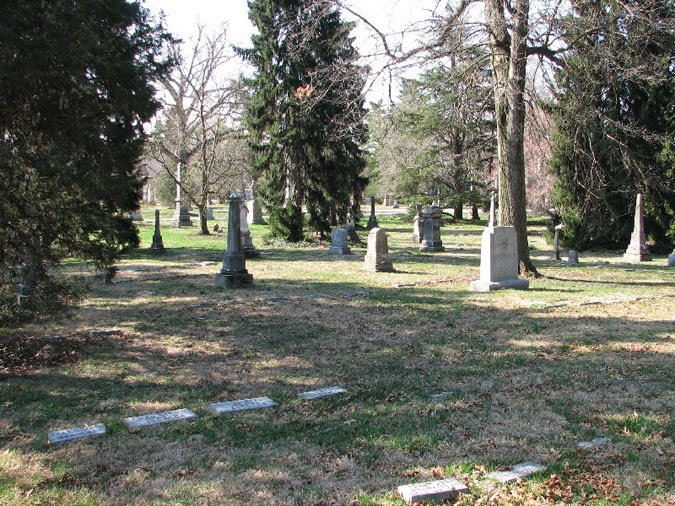 In 1893, Gustavus and his two sisters moved to Cincinnati where he died on December 11, 1893 after suffering a paralytic stroke.  He was buried at Spring Grove Cemetery.

The painting on display at Glessner House Museum was executed between 1867 and 1869 when Gustavus and Godfrey Frankenstein were traveling through the Alps.  An inscription on the backside of the board explains the scene:

“Mer de Glace.  Chamonix Valley.  Alps.  Painted from Nature.  By Gustavus Frankenstein.  The View is taken from the Flegere, directly opposite the Mer de Glace, and 6000 feet above the Sea.  The Mer de Glace cuts the Mont Blanc Chain deeply in two.”

NOTE:  The Mer de Glace (Sea of Ice) is a glacier on the northern slopes of the Mont Blanc massif in the Alps.  It is the longest glacier in France, measuring nearly 4.3 miles long and 660 feet deep.
Posted by Glessner House Museum at 6:54 PM