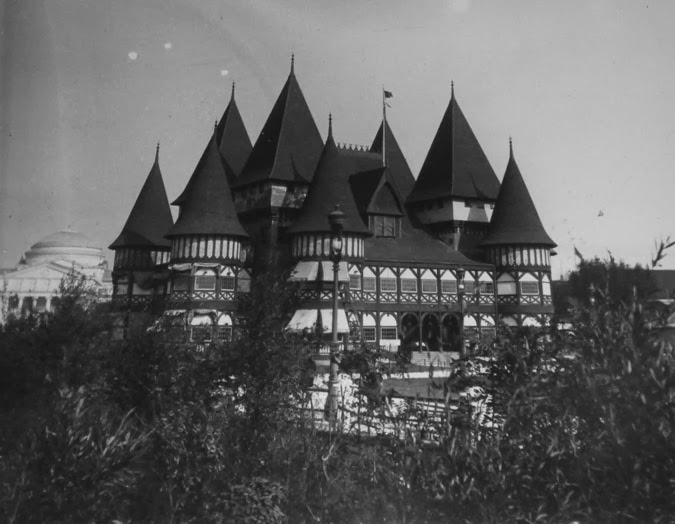 Three large photographs of scenes at the World’s Columbian Exposition, taken by the Glessners’ son George, are on prominent display in the museum’s visitors’ center.  They depict the caryatid porch of the Palace of Fine Arts (now the Museum of Science and Industry), the Ho-o-den or Japanese Pavilion on the Wooded Island, and the Café de la Marine also known as the Marine Café. 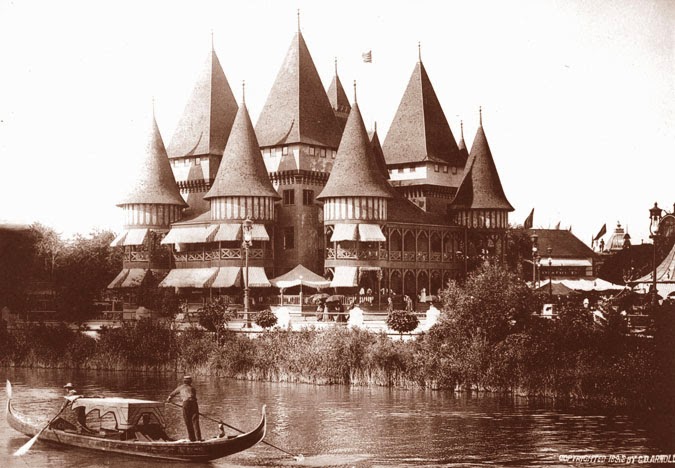 The Marine Café, one of the most distinctive buildings at the Fair, was one of five structures designed by Henry Ives Cobb, who was appointed to the board of architects in January 1891.  He ultimately had more commissions at the Fair than anyone other than Daniel Burnham’s firm.  Cobb’s best known design at the Exposition was the Fisheries Building, but he also designed the Indiana Building, the India Pavilion, and the Streets of Cairo on the Midway Plaisance. 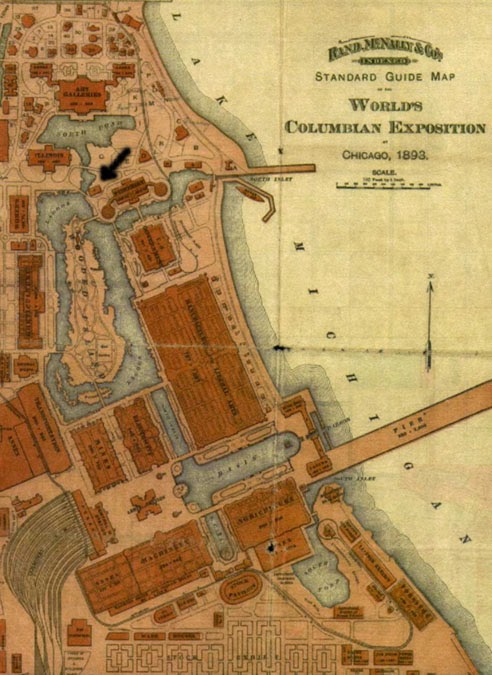 Located immediately to the north of the Fisheries Building along the northeast edge of the lagoon surrounding the Wooded Island, the Café de la Marine was one of several restaurants in this vicinity.  Nearby dining options included a Japanese Tea House,  Swedish Café, Polish Café, Clam Bake, Soda Fountain, and a large Banquet Hall.  As its name suggested, the Café de la Marine served seafood, or, as one guidebook stated, “all animals from Water.” 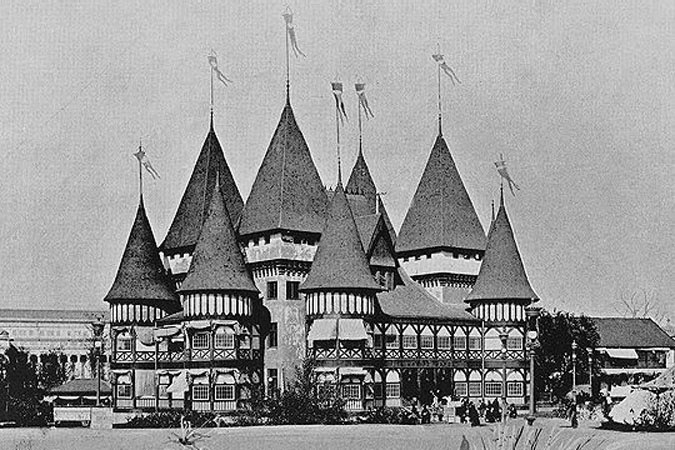 The structure was designed in a fanciful French Gothic style and featured four pyramidal and six conical towers of various heights surmounted by tall finials.  Two story verandas wrapped the sides providing beautiful views across the lagoon and the waterway leading into the North Pond beyond which stood the Palace of Fine Arts.  Alternating dark wood and light staff (the plaster-like material that was used on the exterior of most of the buildings at the Fair) suggested Tudor half-timbering. 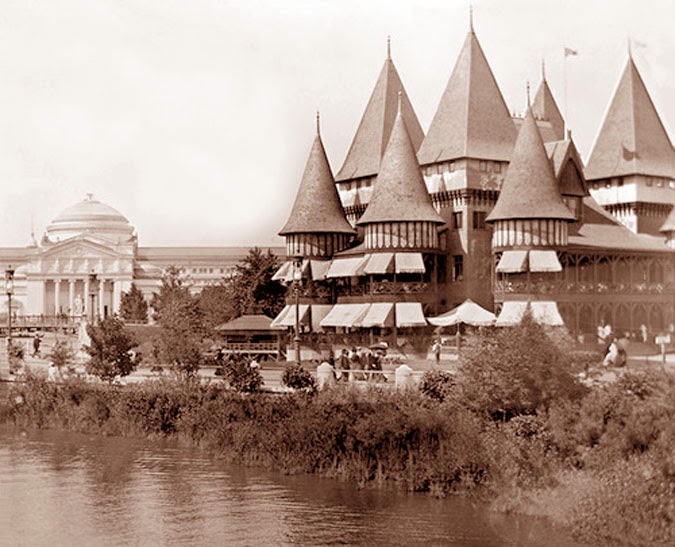 Since the building functioned as an eatery, it did not receive the same level of attention as did the main exhibition buildings.  However, the Café was the scene of an interesting event that was reported in the Chicago Tribune on June 14, 1893.  The event involved a luncheon for the Infanta Eulalia, youngest child of Queen Isabella II of Spain, the official emissary for her country to the Fair.  Accompanied by her husband, the Infante Antonio, the Infanta concluded her visit to the Fair and Chicago with a flurry of activities including lunch at the Café.  The Tribune reported the event as follows:

“Stop,” said a big Columbian Guard as he grasped a slender man in a dark suit by the arm.  The guard was standing at the foot of the stairway leading to the second floor of the Marine Café at Jackson Park.  “This here café is closed,” he continued, as the slender man struggled to get away.

“Can’t help it, sir.  Sorry, but orders is orders.  You’ll have to wait till your wife comes out.  Nobody but the Infanta and her party are allowed up-stairs.”

“But,” said the smaller man, catching his breath anew, “the Infanta is my wife.”

It was Prince Antoine, who, as usual, had come to Jackson Park ahead of the rest of the royal Spanish party and had spent the morning walking about the grounds and buildings in a thoroughly interested and democratic way.  He had his pointed black beard shaved off before he started for the Fair, and, wearing only a heavy mustache it was little wonder that he was not recognized.

But the guard made a low obeisance when the Prince announced himself, and H.R.H. hurried up-stairs, to be greeted with laughter by the assembled party, the Princess taking occasion to twit him on his changed appearance. 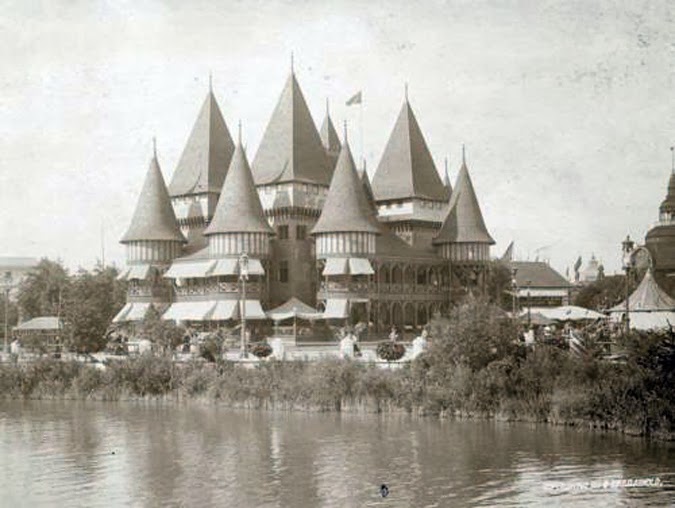 The Infanta and her party reached Jackson Park about noon, coming as usual on the Gryphon.  Director-General Davis’ launch was in waiting and took them at once to the Marine Café, just north of the Fisheries Building.  The table had been spread on the open gallery about the outside of the second story, but handsome screens and curtains of flowers shut out the view of the crowd which gathered on the grass below.  The west end of the gallery had been fitted up as an impromptu reception room.  Tiger skins were stretched upon the floor and great palms drooped in the corner.  Between the posts of the gallery hung festoons of roses and green, trailing vines.  Plates were laid for fifteen around an oval table and at each place was a handsome card embossed in colors with the crossed flags of Spain and the United States.

What the Party Ate.

The party lingered for more than two hours about the table.  The Princess sat where with one glance of her eye she could take in the splendid sweep of the lagoons about the green wooded island, backed to the south by the splendid white towers of the buildings about the Court of Honor.

It was nearly 3 o’clock when the party boarded the launch again . . . 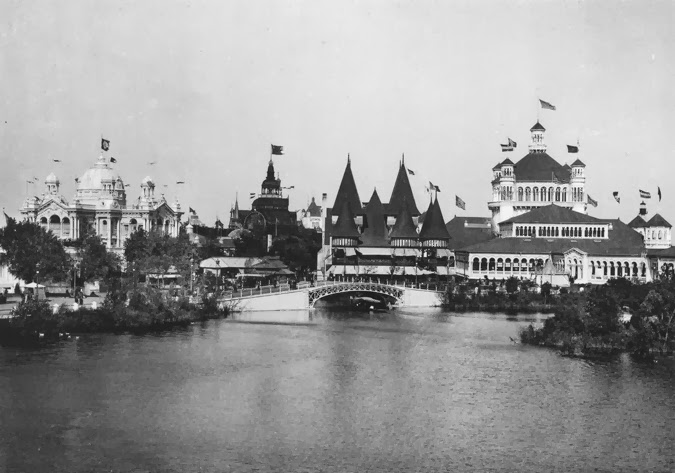 Less than a year later, nothing remained of the Café de la Marine, as it was destroyed along with most of the other buildings at the Fair.  Today, most visitors to Jackson Park, walking across the nearby Clarence Darrow Memorial Bridge, are unaware of the striking edifice that once stood at this location.
Posted by Glessner House Museum at 8:52 AM