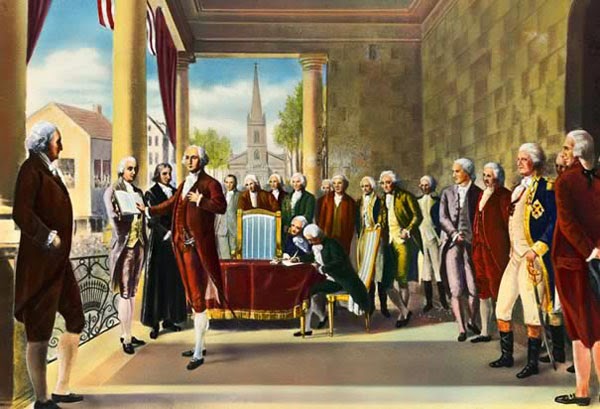 This week marks the 225th anniversary of the inauguration of George Washington as the first president of the United States.  That event took place in New York City on April 30, 1789.  The centennial of that event in 1889 was marked with huge celebrations in New York, Chicago, and elsewhere.  Let us look at how that centennial was celebrated.

Frances Glessner recorded the following entry in her journal on May 5, 1889:
“Tuesday was the centennial celebration of Washington’s inauguration.  The city was gay with bunting – fireworks were displayed at different places – and the immense crowd on the lake shore was unruly and many people were reported hurt.  A regiment passed by here in the morning.”

The Chicago celebration was organized by the Union League Club.  The day included exhibitions at museums, special church services, and elaborate opening exercises of the children outside schools around the city, all attended by huge crowds. 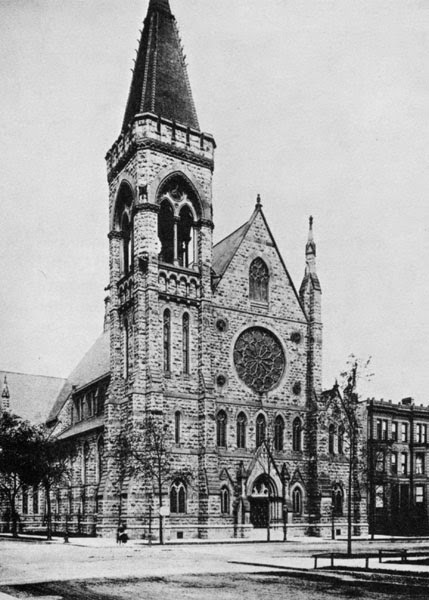 The account of the service held at Second Presbyterian Church is typical and even includes some words of wisdom for the politicians of the day:
“The Rev. S. J. McPherson of the Second Presbyterian Church, Michigan avenue and Twentieth street, delivered a thoughtful and scholarly address on the character of Washington.  The impression frequently given out that Washington did everything easily was both mistaken and injurious.  He always took pains and it was his careful attention to detail that saved the American Republic.  He was never an officer seeker – a quality to be commended to the politicians of the present day.  He made himself so necessary that the office sought him.  That is the kind of civil service we need but do not seem able to get.  The organ loft and the rear of the pulpit were beautifully draped with large flags, and there were other decorations at the church.”

Downtown buildings were elaborately decorated with flags, bunting, and huge portraits.  Several large venues in the downtown area served as sites for grand patriotic speeches about the life and impact of Washington in American history. 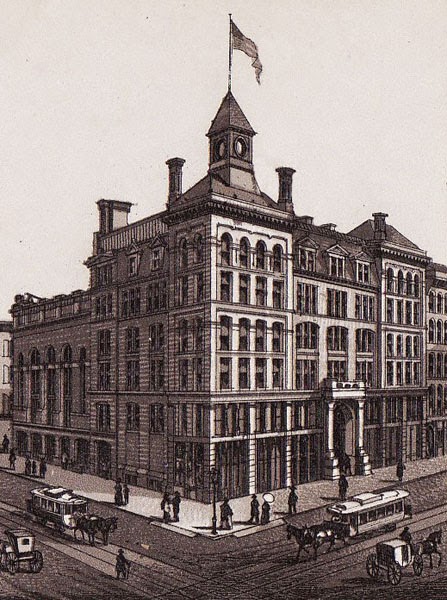 The Central Music Hall was the scene of one of these gatherings.  At 3:00pm, chairman Robert Todd Lincoln welcomed 3,500 guests into the hall which was draped in red, white, and blue bunting and mottoes.  The stage was surrounded by an arch of immense silken flags with a huge painting of George Washington as the keystone.  The stage featured a central pyramid of 100 female choristers dressed in red, white, and blue.  The ceremony began with the singing of “Hail, Columbia” with all the attendees waving miniature American flags.  Several speeches were offered including one by Dr. Simon J. McPherson, pastor at Second Presbyterian Church.

An interesting part of the celebration was the display of 1,001 artifacts from George Washington and the Revolutionary War era at the Exposition Building (now the site of the Art Institute).  The artifacts, which filled five large rooms, were from the collection of Charles F. Gunther, a wealthy Chicago confectioner and collector.  Items included letters signed by Washington, six paintings of Washington including three by Gilbert Stuart, and Washington’s bed and other items used during the War.  (Most of Gunther’s collection, which also included Lincoln’s deathbed, was eventually purchased by the Chicago Historical Society, now the Chicago History Museum).

As the day drew to a close, the huge crowds that had assembled downtown broke into three smaller masses and headed to the three displays of fireworks.  An elaborate banquet was held at the Union League Club for visiting dignitaries, with 200 in attendance.

The events in New York were even grander in scope.  President Benjamin Harrison retraced the itinerary of the first inauguration, travelling from the Governor’s mansion in New Jersey to New York, arriving by boat at the foot of Wall Street.  From there he proceeded to old Saint Paul’s Church on Broadway and finally to the site where Washington was administered the oath of office.  The city was the site of three days of festivities including military displays, parades, music, and much pageantry. 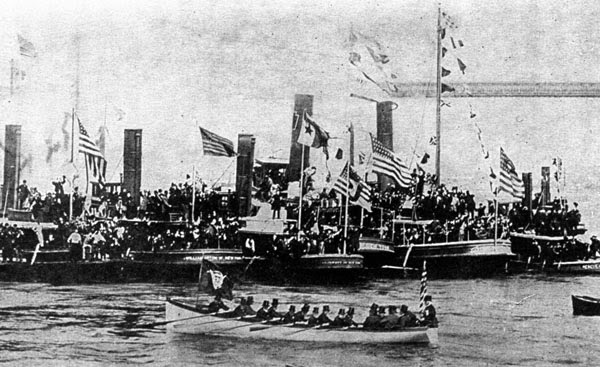 The poet John Greenleaf Whittier composed a special ode and Samuel Francis Smith, author of “America” (My Country Tis of Thee) composed a special fifth verse for the occasion:
Our joyful hearts today,
Their grateful tribute pay,
Happy and free,
After our toils and fears,
After our blood and tears,
Strong with our hundred years,
O God, to Thee. 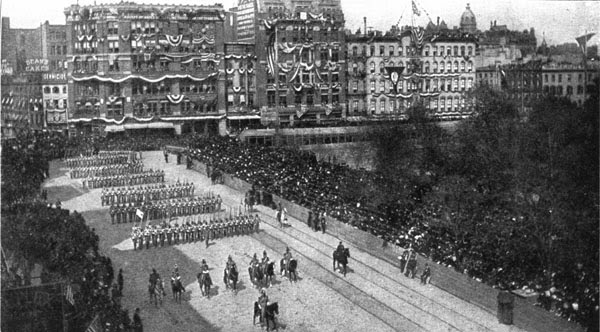 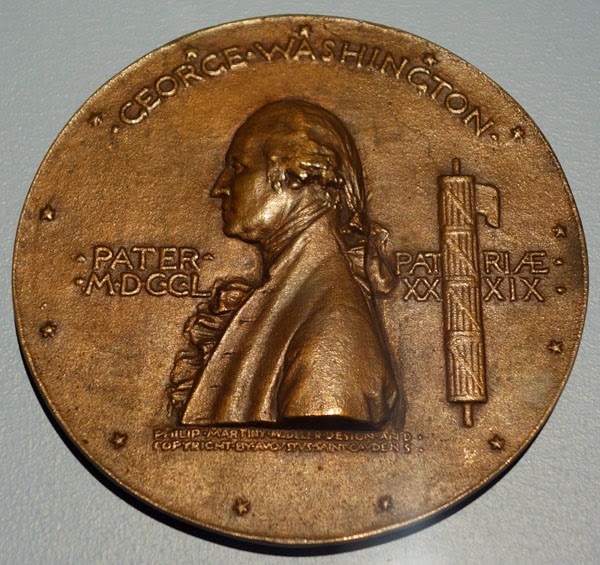 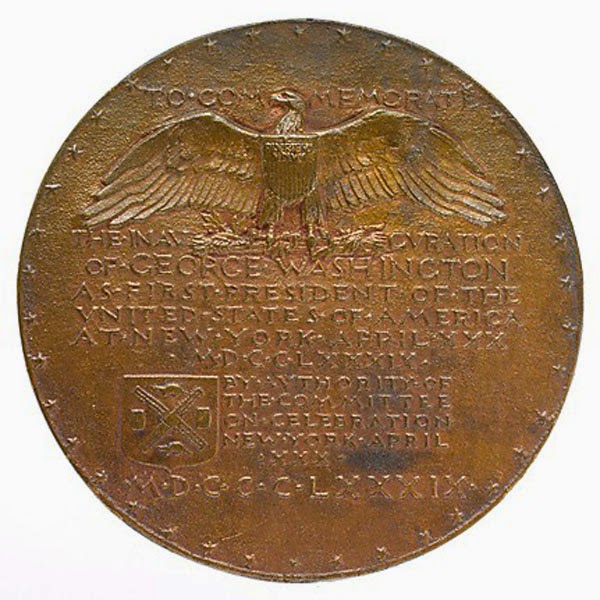 Many other less artistic souvenirs were created as well, such as the 12 inch cast iron commemorative hatchet shown below, recalling the famous story of Washington cutting down a cherry tree. 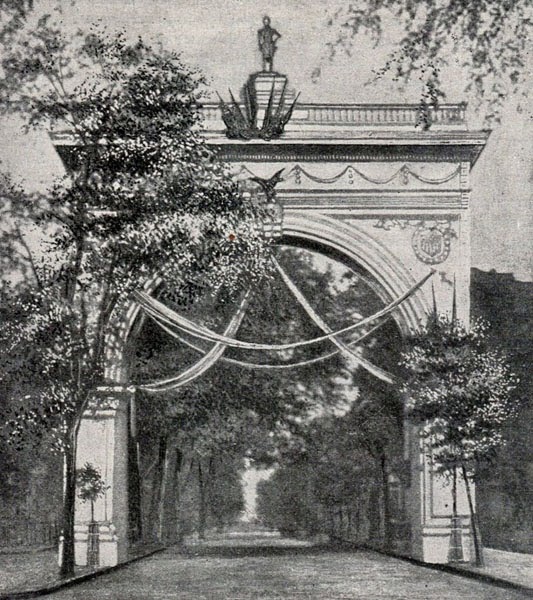 A large triumphal arch was erected over Fifth Avenue at Washington Square by local businessman William Rhinelander Stewart, who raised $2,765 from his friends for the project.  The arch, constructed of wood and plaster, was so well received that plans were made for a permanent version. 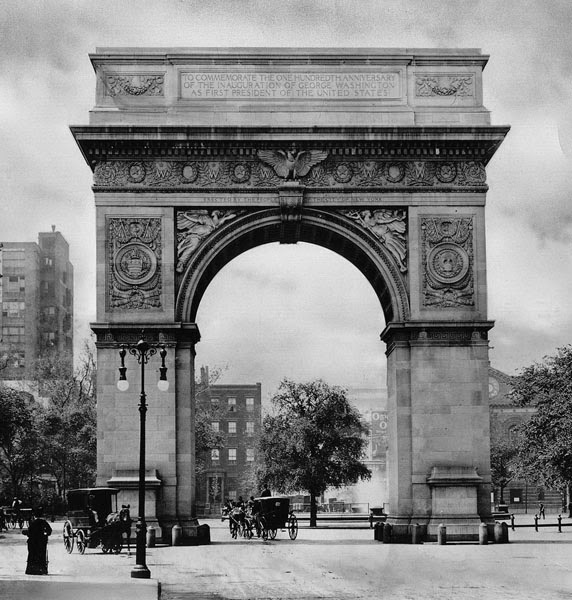 Architect Stanford White designed the new arch which was built in 1892; he donated his services for the project.  The Washington Arch, modeled after the Arc de Triomphe in Paris, stands 77 feet tall and is constructed of white Tuckahoe (Westchester) marble.  The face is covered with images of war, peace and victory along with stars, capital “W”s and inscriptions.  Two additional statues of Washington known as Washington at War and Washington at Peace, were added in 1918.  They are the work of Hermon A. MacNeil and A. Stirling Calder (father of Alexander Calder), respectively.

As a headline in the Chicago Tribune stated the next day, “When our babes are old, they will remember and talk about yesterday’s celebration.”
Posted by Glessner House Museum at 6:41 PM