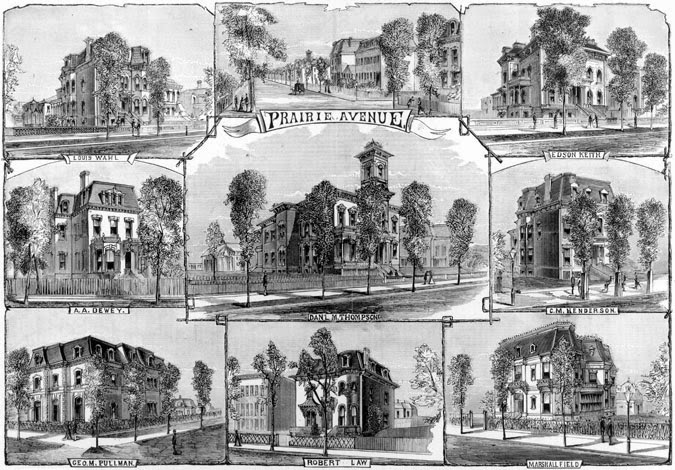 On Thursday June 19, 2014 at 6:00pm, Glessner House Museum Executive Director and Curator William Tyre will give a lecture entitled “A Look Back: Chicago and the World in 1874.”  The free event, sponsored by Friends of Historic Second Church, will take place at Second Presbyterian Church, 1936 S. Michigan Avenue in Chicago’s South Loop neighborhood, and is being held to celebrate the 140th anniversary of the completion of Second Presbyterian’s current church building.  Doors will open at 5:30pm for tours of the National Historic Landmark sanctuary before the program begins.

The Prairie Avenue neighborhood surrounding the church was a thriving residential neighborhood in 1874, and was home to many of Chicago’s leading business and social leaders.  The area was well established by the time of the Great Chicago Fire of 1871, and nearly 40 mansions had already been built on the six-block stretch of Prairie Avenue between 16th and 22nd streets.  Building activity increased immediately after the fire, as residents who had been burned out in the fire sought a new location where they could immediately begin building their new homes.

The illustration at the top of the article appeared in the May 1874 edition of The Landowner, a monthly periodical focusing on the work of architects and real estate developers in and around Chicago.  The image includes eight of the most prominent houses on Prairie Avenue, and one street scene, and bore the following caption:

“Our artist shows in this issue a number of the beautiful houses on Prairie avenue, one of the most fashionable and handsomely built of all our South-Side thoroughfares.  No city in the world can rival Chicago in its residences, a fact which shows that this class of buildings has not suffered by the fire and the consequent turning of capital into the erection of business blocks.

“After all, one of the greatest attractions a city can offer is its homes, for to obtain them is the end of most men’s aspirations, for which they toil and sweat in the counting-room and at the various trades and professions.  Visitors who crowd to Chicago neglect to see the homes of our citizens, being wholly absorbed and astonished by the wonderful buildings put up since the fire in the burnt district.  They should not fail to visit such streets as Prairie avenue, where the home-life of our citizens of means is laid.”

The images, beginning at upper left were as follows:

All of the residences pictured have been demolished.  Two of the images are of particular interest. 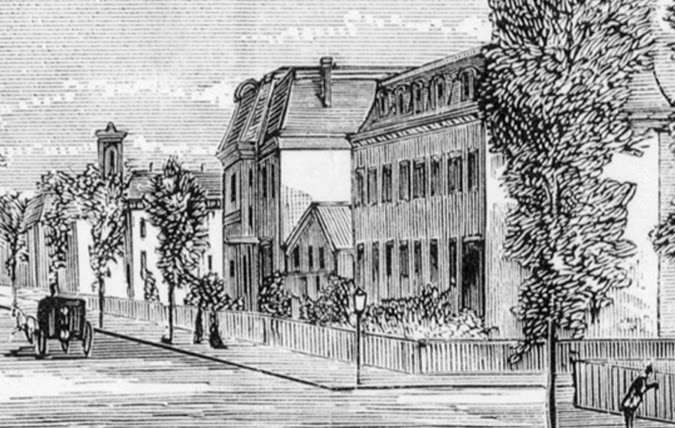 The view of Prairie Avenue looking southwest at 18th Street is the only known image showing the southwest corner of Prairie and 18th prior to the construction of Glessner House in 1886-1887.  Just to the right of center in the illustration is a three-story double-house with Mansard roof, occupied by the Hitchcock and Galloway families.  John J. Glessner purchased the double-house in March 1885, selling off the south portion of the lot to Osborn R. Keith, and retaining the remaining 75 feet of frontage for construction of his own house. 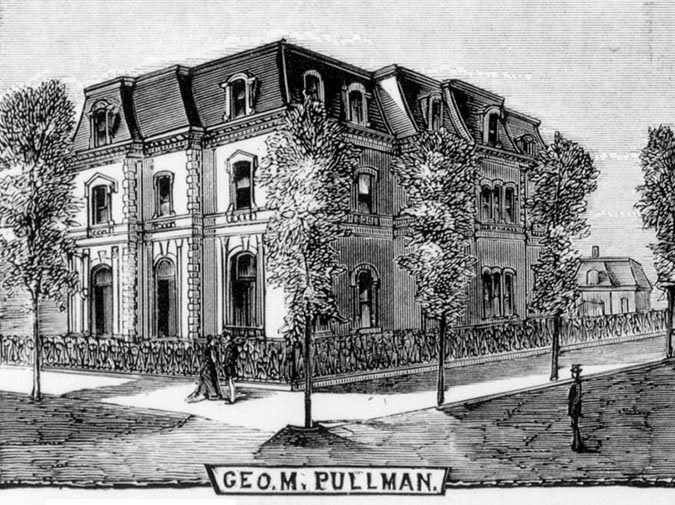 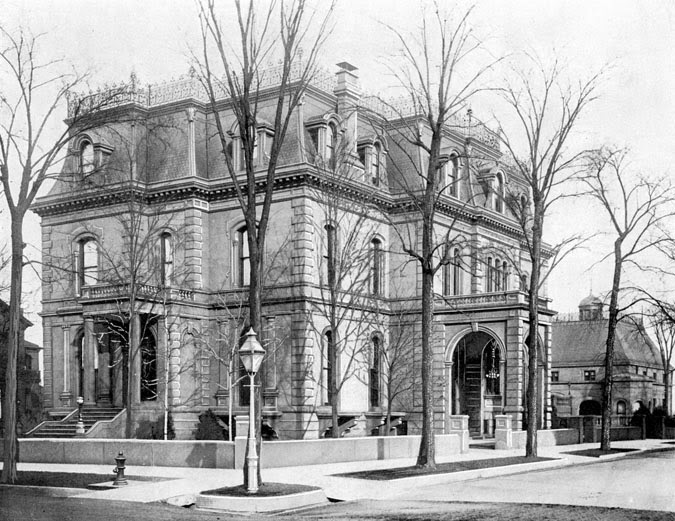 The other image of interest is that of the George M. Pullman mansion.  Although construction on the house had begun in 1871, it was still under construction in 1874, and in fact would not be ready for occupancy by the Pullman family until early 1876.  Comparing the illustration with a photo of the finished house, one can see major elements missing including the front porch facing Prairie Avenue and the porte cochere facing 18th Street, as well as the iron roof cresting and other finishing touches. 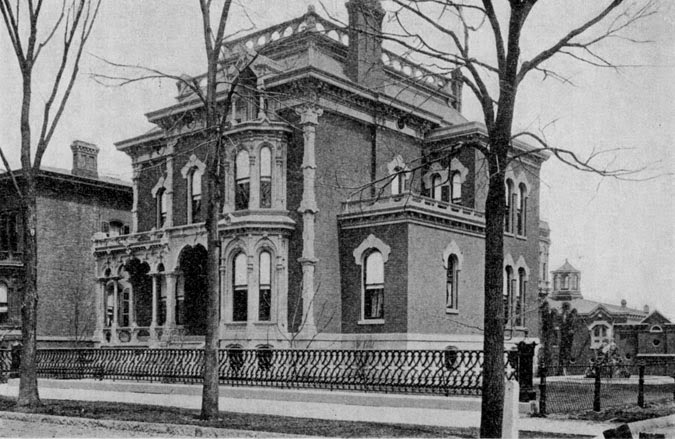 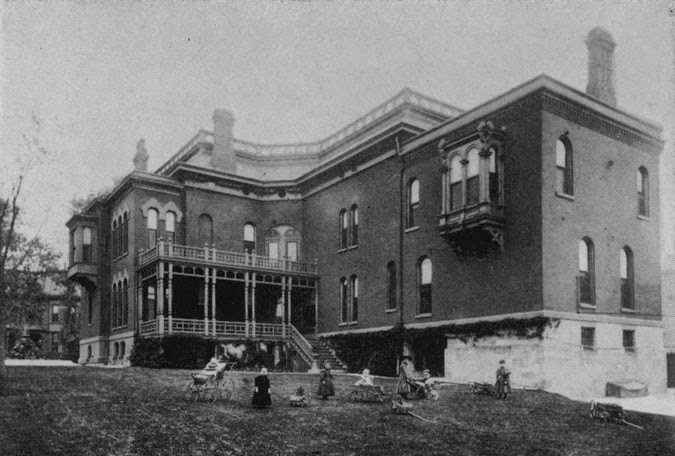 Other building activity during the year included a large $10,000 addition to the William G. Hibbard house at 1701 S. Prairie Ave.  The original house had been built in 1868 with William LeBaron Jenney as architect.  Jenney was also the architect of the addition, seen in the second photo above.  As the house was located on the east side of the street, the back porches faced directly onto Lake Michigan which was just beyond the Illinois Central Railroad tracks that bordered the back of the Hibbard lot. 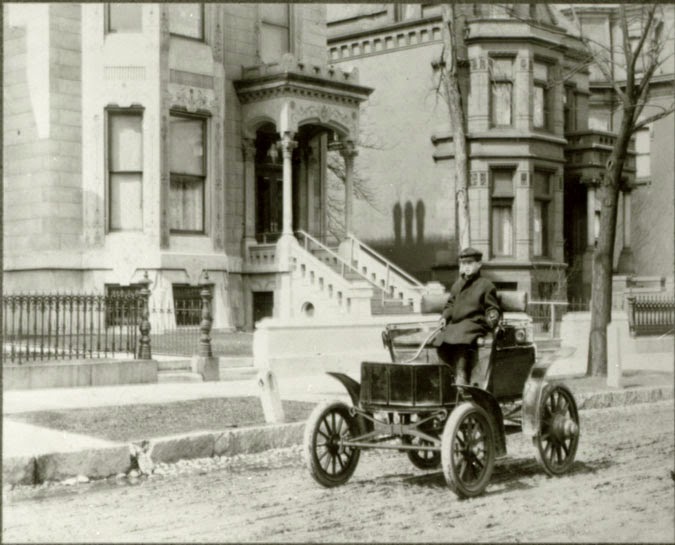 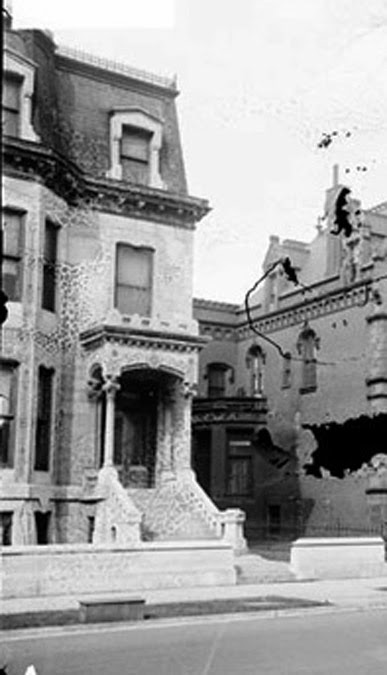 The home of Daniel Shipman was constructed in 1874 at 1828 S. Prairie Ave.  William W. Boyington, best remembered today for his design of the Chicago Water Tower, was the architect of this house, designed in the predominant Second Empire style of the day.  An interesting editorial about Shipman was published in the Chicago Tribune shortly after his death in 1906.  Shipman made his fortune in the white lead industry, but he and his wife left no children to inherit his fortune.  As a result, his estate was converted into a trust from which the earnings were paid yearly to five charities:
-Illinois Schools of Agriculture and Manual Training for Boys
-Chicago Home for Incurables
-Chicago Old People’s Home
-Hahnemann Hospital of Chicago
-St. Luke’s Free Hospital

The Tribune noted in reporting the disposition of Shipman’s estate:

“In felicitating the five admirable charities which have profited so gratifyingly by Daniel B. Shipman’s will it is interesting to remember that the provisions to be carried out would not have been possible had Mr. Shipman accumulated a large family of children during his many years of married life.  If heaven had blessed him with four, five, or six boys there would be every reason to suppose that the boys who attend the Illinois Schools of Agriculture and Manual Training  would not be the gainers by the liberal endowment fund provided by the terms of the will.  So here is an instance where many boys are benefited in place of a few. . . Perhaps it is not an unworthy thought that Providence may have decreed this charitable distribution and that ofttimes marriages are childless in order that worthy charities may be the substantial gainers.” 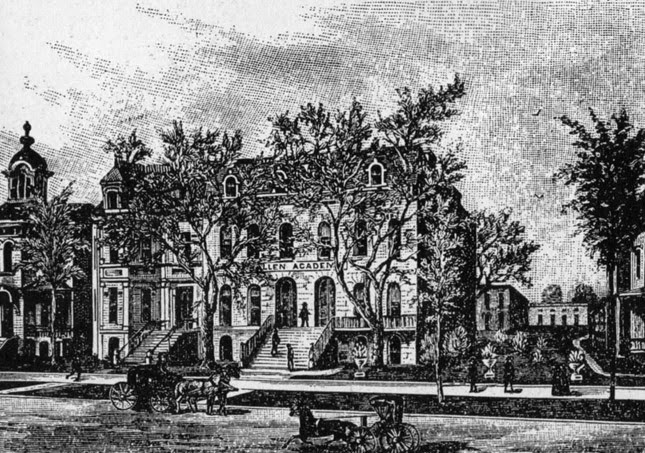 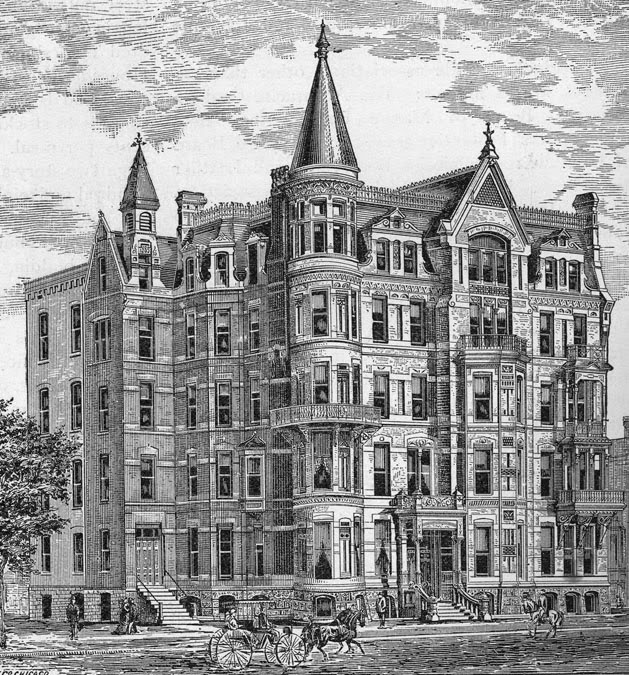 The Prairie Avenue neighborhood was home to a number of private schools to which the residents sent their children.  One of the largest and most prominent was Allen’s Academy for Boys which opened in 1874 in a building at Michigan Avenue and 22nd Street.  The principal, Ira W. Allen, had previously served as the head of Lake Forest Academy.  In 1883, Allen engaged the services of architect Charles Chapman to design a much larger building which was located on the south side of 22nd Street (now Cermak Road) east of Prairie Avenue.  The school closed upon Allen’s retirement in 1892. 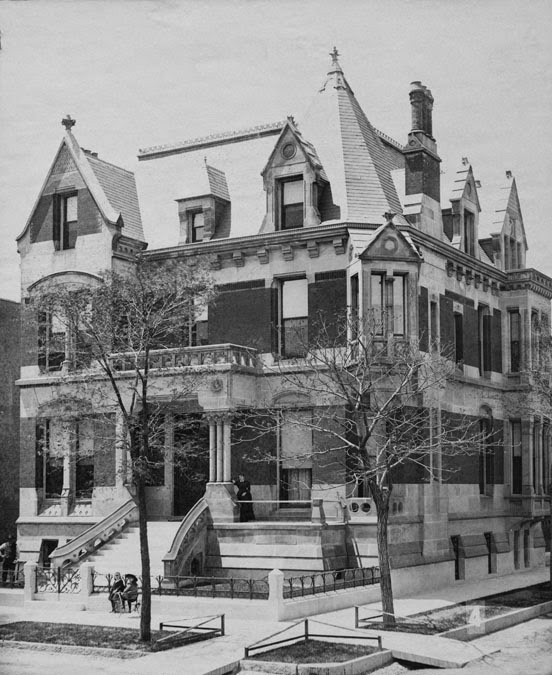 One of the most prominent  and important houses on Prairie Avenue was designed in 1874 for John B. Sherman, vice president and manager of the Chicago Union Stock Yards.  Located at 2100 S. Prairie Avenue the house was designed by a new architectural firm in Chicago – Burnham and Root.  It was the second commission the young architects had received into their office, and it was crucially important.  During construction, Daniel Burnham became acquainted with Sherman’s daughter Margaret, and by the time the house was finished in 1876, they had wed and moved into the new house.  Sherman was one of Chicago’s most prominent businessmen, and he used his considerable influence to secure numerous commissions for his son-in-law’s architectural practice  from his Prairie Avenue neighbors and Stock Yards associates.

The house broke away from the predominant Second Empire style of Prairie Avenue and featured Ruskinian Gothic details including a hipped roof punctuated by numerous dormers of various sizes and shapes, stone banding delineating the floor levels, and a decorative second level oriel window addressing the prominent corner site.  Louis Sullivan, not usually known for his praise of other architects’ works, wrote (in the first person) about the house in The Autobiography of an Idea:

“There, on the southwest corner of Prairie Avenue and Twenty-first Street, his eye was attracted by a residence, nearing completion, which seemed far better than the average run of such structures inasmuch as it exhibited a certain allure of style indicating personality.”
Posted by Glessner House Museum at 5:42 PM