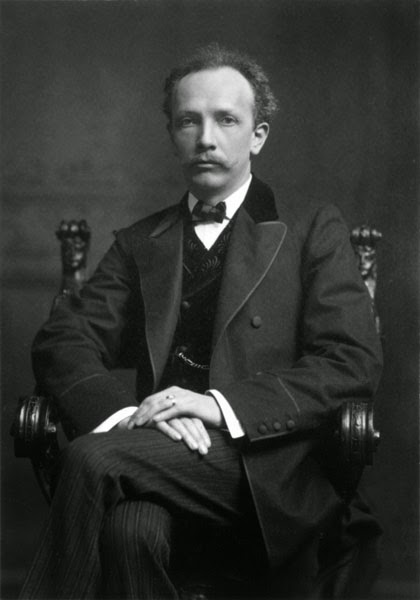 Wednesday June 11, 2014 will mark the 150th anniversary of the birth of the great composer and conductor Richard Strauss.  Widely regarded during his lifetime as the greatest composer of the first half of the 20th century, his innovative music, which bridged German Romanticism and early modernism, was championed by the first two conductors of the Chicago Symphony Orchestra during its first half century – Theodore Thomas and Frederick Stock.
In February 1895, the Chicago Tribune made the following comment at the time of the premiere of his tone poem “Death and Transfiguration” with the orchestra:

“Richard Strauss is an interesting figure in the musical world.  Appointed a conductor at the Royal Opera, Berlin, for 1896, and also to direct the orchestra concerts in that city, he is not yet 31 years old.  At present he fulfills the part of director at the Munich Royal Opera, and last summer was one of the four conductors assisting at Bayreuth.  In Germany he is regarded with favor through his symphonic compositions.

“Of this branch of his work opportunity was allowed to judge in the last orchestra program.  ‘Death and Transfiguration’ was the composition chosen.  In it the composer has given free flight to a remarkably vivid imagination, discarding ordinary artistic rules.  The demands upon the orchestra are prodigious.  If rules are ignored in the writing, difficulties are ignored in the treatment from the executants’ point of view.  In rhythm, complication of themes, and nuances it is redundant almost to the extreme of extravagance.”

Just three years later, in an article entitled “Born for a Baton,” the Chicago Tribune announced:

“The leader of the Royal Orchestra in Munich, Herr Levy, lays down the baton.  There is no necessity for him to wield it longer, as he is soon to wed an heiress.  Richard Strauss has been appointed his successor.

“This is the latest word to reach America concerning musical affairs in the fatherland.  Richard Strauss, who up to this time has occupied the position of second conductor of the Royal Opera, is what the Germans so lovingly designate ‘Ein Munchener Kind,’ having been born in Munich June 11, 1864.  He is not related by blood to the Vienna waltz king, although often erroneously counted as a member of the latter’s family, both bearing the same name.” 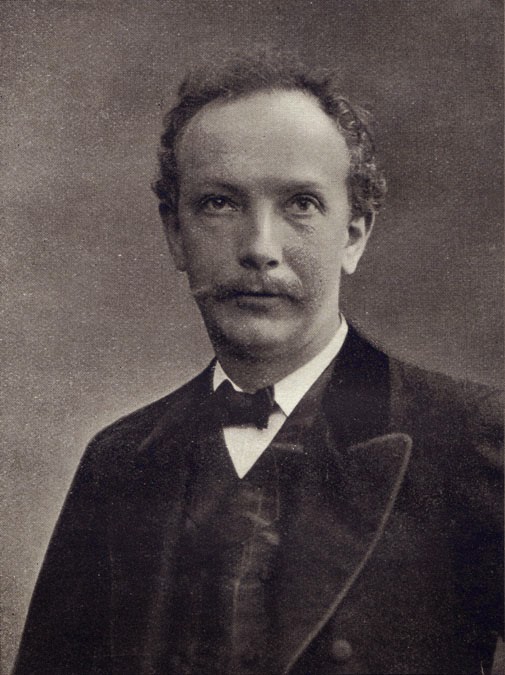 Richard Strauss made his debut in America in February 1904.  In a special to the Chicago Tribune from New York, dated February 28:

“The long heralded American debut of Richard Strauss of Berlin, an important figure at the present time in the world’s field of music, was made in Carnegie hall tonight at last in the Wetzler symphony concerts before an immense audience with notable enthusiasm.

“Mr. Strauss’ compositions monopolized the program, the occasion constituting the first series of festival concerts at which his works will be consecutively exploited, and the composer himself conducted the most important number in the list, his tone poem “Ein Heldenleben,” at his first appearance.”

Strauss’ trip to America also included performances in Chicago.  In the Chicago Tribune, dated March 13, 1904 it was noted that:

“The coming to Chicago of Richard Strauss will in certain respects be the most interesting event of the present season.  There is today no man in the musical world who so completely fills the public eye as does this comparatively young German composer.  His orchestral works and his songs have made their way into every country where occidental music is cultivated as an art, and his influence in both these lines of creative music is already making itself distinctly felt.  We here in Chicago have – thanks to the presence of Mr. Thomas and the Chicago orchestra – been made unusually familiar with all orchestra works of Strauss, and through the efforts of our singers, headed by Mr. Hamlin (whose services in this line should not be forgotten), have made the acquaintance of many of his songs.  We are, therefore, in better position than is any other city in this country to receive Dr. Strauss with understanding and appreciation of what he has accomplished in music.  No other American city heard all of his tone poems so early, and nowhere have they been given with such frequency since that time as here in Chicago, for Mr. Thomas’ keen and constant search for important novelties and his realization of Strauss’ influence in present day music have caused him to place the composition of the celebrated German often before the patrons of the Chicago orchestra.

“The conditions under which Dr. Strauss will be heard here will also be peculiarly favorable.  Even the decriers of Chicago and all that is Chicagoan can but admit that the only orchestra in the United States which can compete with our own for technical and interpretative supremacy is the Boston Symphony.  The other orchestras of the country are capable, but they are not of the superior excellency that distinguishes the one we call our own and that which Boston has so long boasted.  Dr. Strauss will not have an opportunity to direct the Boston organization.

“When he comes to Chicago therefore, he will have under his baton for the first time in this country an orchestra of supreme capabilities.  It is safe to say that Mr. Thomas, while he is no hero worshiper or is not given to lionizing anybody or anything, will see to it that his ‘boys,’ as he calls his players, are in the finest condition possible when Dr. Strauss takes them in charge week after next.” 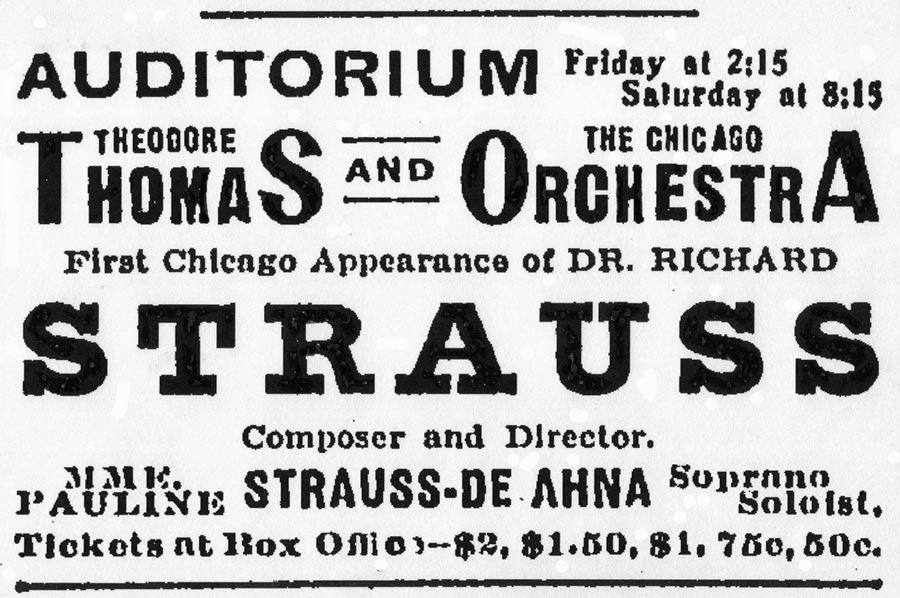 Strauss arrived in Chicago on Wednesday March 30th, and immediately went to the Auditorium where he led the orchestra in a rehearsal of his works lasting two and one half hours.  The concert was presented in two performances – Friday April 1st at 2:15pm and Saturday April 2nd at 8:15pm.  After the first concert, Chicago Tribune music critic W. L. Hubbard reported, in part:

“That master musician of modern music, that wonderful combination of poet, painter, and composer, the man to whom pictures are audible and tones visible – Richard Strauss – appeared at the Auditorium yesterday afternoon, and for over two hours some 3,700 persons sat beneath the spell his great gifts weave and listened to the tonal tales they enable him to tell.

“It may be that some who heard did not understand, and that many who listened did not fully comprehend.  For fully to grasp all that this maker of musical pictures presents to us would mean that to us, too, the tones of an orchestra were but so many pigments, and that the color and forms drawn in them upon the canvas of the vibrant air were as clear, as distinct, and as definite to our aural vision as they are to his.

“To most of us such hearing is denied – our ears are still too blind to be able to see all the dream pictures Richard Strauss’ magical power would have us see through them.  But while we may be thus blind, and while some of us in that blindness may even question the possibility of such tonal pictures existing – may, in short, doubt the possibility of music performing all the tasks he would have it perform – it was not difficult, while sitting yesterday afternoon in the presence of this mighty weaver of musical mysteries, to catch glimpses of the brilliantly colored pictures he was painting with tones, and to credit the possibility of music doing all he would have it do.”

The program opened with Theodore Thomas leading his orchestra in the prelude to “Die Meistersinger” after which he turned the podium over to Dr. Strauss for the remainder of the concert.

“A rousing fanfare from the whole orchestra and applause loud and long continued expressed to the celebrated conductor-composer Chicago’s cordial welcome.  He bowed repeatedly, and then raised his baton for the first measures of ‘Thus Spake Zarathustra.

“After the ‘Zarathustra,’ Mme. Strauss appeared, escorted by both Mr. Thomas and Dr. Strauss.  Mme. Strauss is one of the leaders of the dress reform movement in Germany, and her gown yesterday was in this style, an elaborate creation of creamy lace and silk, which was distinctly becoming to her.  Her singing proved interesting and satisfactory from an interpretative viewpoint.  The voice has lost its richness in the upper middle register and in the high tones, but it is of no inconsiderably beauty in the lower half, and it is used throughout with so much of discretion and understanding that it seems adequate for all that is undertaken.  The seven songs heard were beautifully interpreted, and the exquisite accompaniments, played, as they were, in the finest style by the orchestra, made the performance of them in high measure gratifying.” 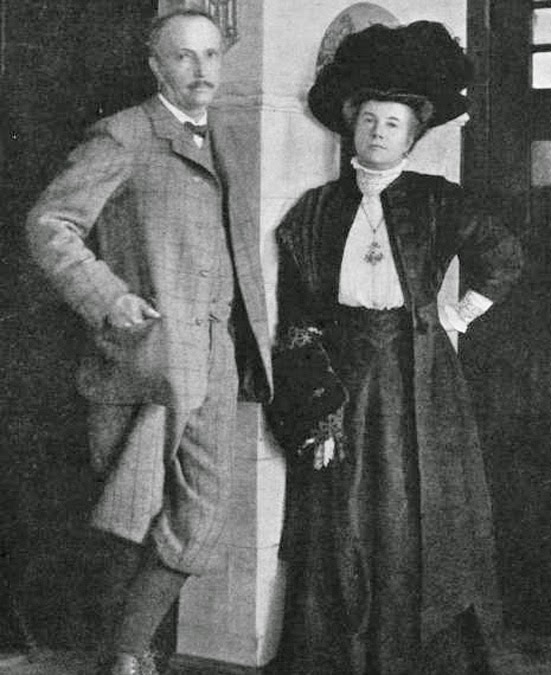 The Glessners were present at the second Strauss concert on the evening of Saturday April 2nd, having just returned that afternoon from a two-month trip to Santa Barbara, California on account of Frances Glessner’s health.  She made the following entry in her journal:

“We had a state room and were very comfortable coming home.  Miss Gillette of Elkhart was on the train.  We got here between three and four.  Frances and Blewett met us – Alice was here at the house.  George had gone to Canada and Littleton.  Helen and Anna (her sisters) soon came.  We had a good talk and a very warm welcome from all.

“In the evening we had the Lees and the sisters here to dinner and then we all went to the concert where we heard Richard Strauss conduct the orchestra.  Madame Strauss sang.  Mr. Thomas conducted the first number and Strauss the rest of the program.

“After the first number Mr. Thomas sat with Mrs. Thomas a while, then he called on us in our box.  Mrs. Thomas, Mrs. Johnson, Mrs. Woodyatt, Mr. Baird called before the concert, - Mr. Burnham, Mr. Kramer, Mr. Block and others called in the intermission.  Frances and Blewett went out to the florist in the intermission and sent flowers for me to the orchestra and the Strauss’.” 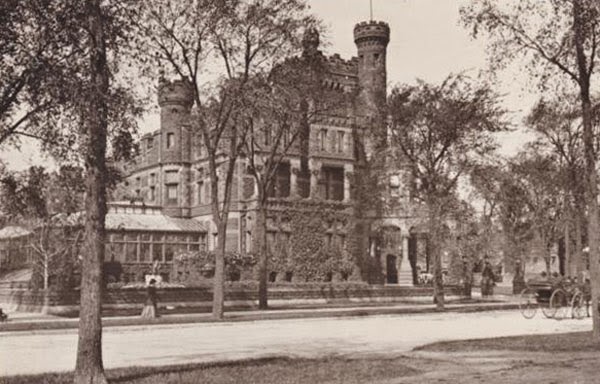 On April 4th, Dr. and Mme. Strauss gave a benefit recital for the Russian Red Cross society at the residence of Potter and Bertha Palmer on Lake Shore Drive.  The event netted $4,500 for the relief of Russian soldiers fighting in the Far East.  The Chicago Tribune reported:

“It was entirely a Strauss recital.  It was a German evening.  Every selection given was of Strauss’ own composition.  Dr. Richard Strauss, the famous composer and orchestra leader of Berlin, did not play a single solo, but presided at the piano as accompanist for every number.  The first, second, and fourth parts of the program were by Mme. Strauss de Ahna, soprano, and the third part was by Paul Meyer, violinist, second concertmeister of the Chicago orchestra.”

The final performance by Dr. Strauss and his wife in Chicago was given at the Auditorium on the evening of Thursday April 14th.  He traveled to Washington to give his final American concert on April 26th before returning to Germany.  During his time in the United States he appeared in 36 concerts, and was received with enthusiasm in every city in which he performed.

NOTE:  In February 1936, when CSO conductor Frederick Stock returned from a vacation, he directed the orchestra in a performance of the tone poem “Death and Transfiguration” by Richard Strauss in memory of John J. Glessner, who had died January 20th of that year.