The Glorious Fourth of July 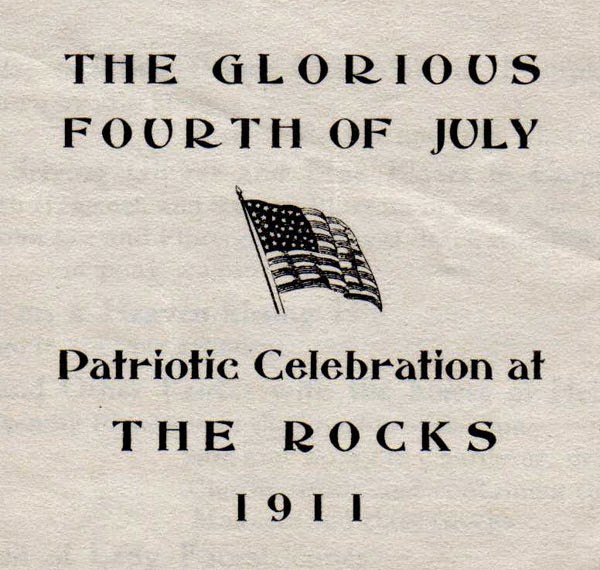 The Fourth of July was celebrated in grand style at the Glessners’ summer estate, The Rocks, in 1911.  The event included a parade in which the Glessners’ seven grandchildren and their friends participated, along with their horses and ponies – a total of 17 children and 13 horses.  A grand stand was erected in front of the farm house, where lemonade was served following the spectacle.  John Glessner served as the master of ceremonies and orator of the day, delivering the following speech to explain the holiday to his grandchildren:

“My dear children – I wonder if you know just what the 4th of July means.  More than 135 years ago this country was a colony of Great Britain and all the laws were made in England, and a large amount of the taxes collected here were spent there.  This was so unjust and burdensome that the people here determined to change it and make a new nation and choose their own rulers to make their laws and collect and spend their taxes here at home.  And they resolved to do this even if it meant a long and bloody war, which it did.  So on July 4, 1776 they made their Declaration of Independence and it is this that we now celebrate every July 4th.  For a great many years the celebration was largely in fireworks and shooting guns and cannon.  I don’t know why this way was chosen unless because people like the blaze of fire, the smell of gunpowder and the noise of explosion, but a great many persons were hurt by it and some were killed every 4th of July and a great deal of property was burned up, until now in many places fireworks etc. are prohibited by law and this is why we have our pleasant little celebration.”

A program was printed giving the details of the parade, with the various grandchildren and their horses assuming the roles of characters from mythology, fairy tales, and literature.  Isaac Scott and Helen Macbeth (Frances Glessner’s sister) made the banner which read, “THE ROCKS, JULY 4th.”  Frances Glessner Lee, in her usual highly efficient manner, served as “stage manager,” coordinating and the details of timing, props, etc.  Following a variety of races and another parade, this time on bicycles, John Glessner awarded prizes to the participants.  Not surprisingly, every child won a prize – a crisp new $1.00 bill.

The printed program, entitled “THE GLORIOUS FOURTH OF JULY, Patriotic Celebration at THE ROCKS 1911,”  announced the following participants and activities: 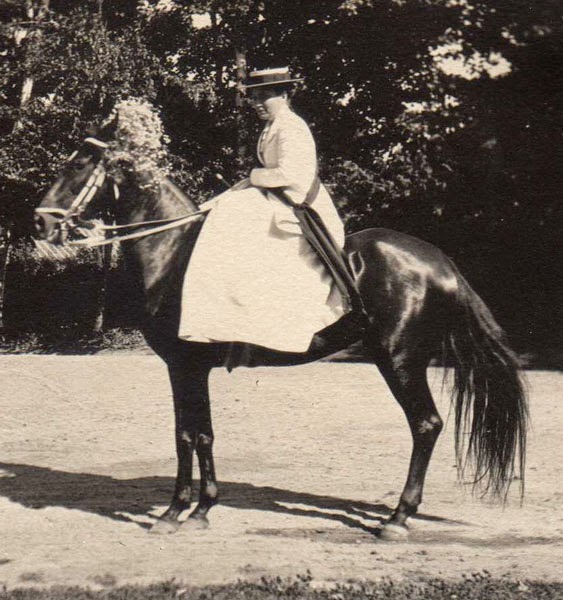 Grand Marshal on Horseback
Which is Mrs. George Glessner on Dixie Crow 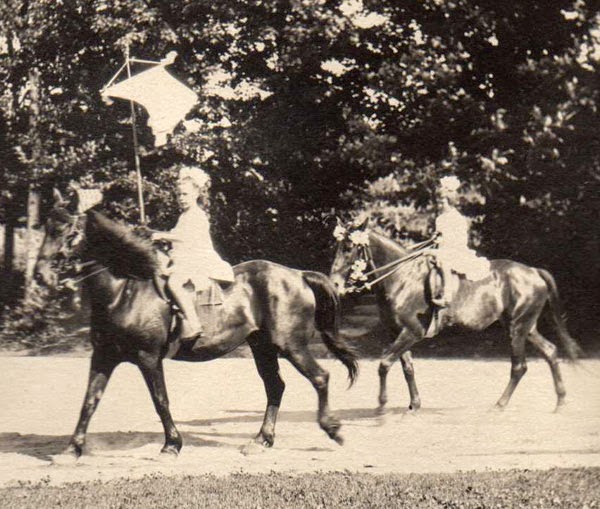 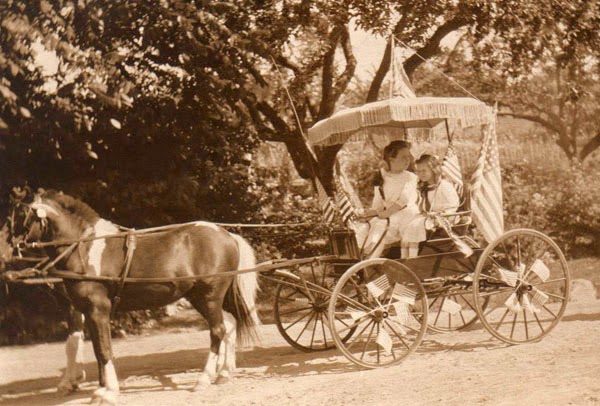 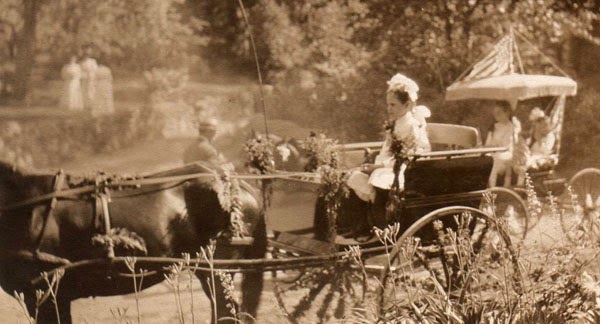 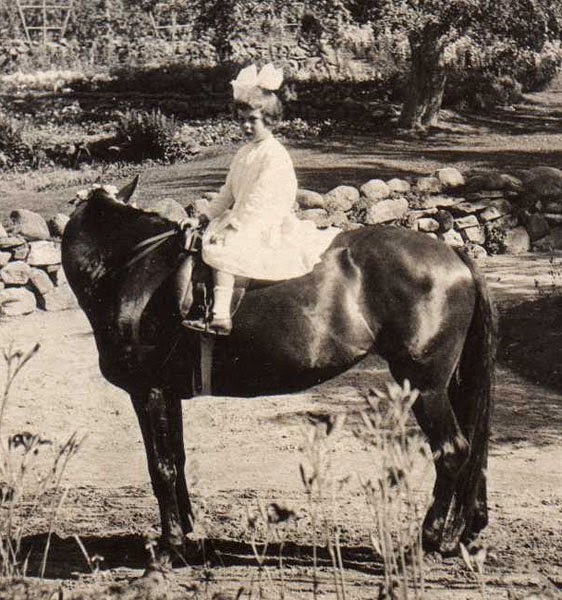 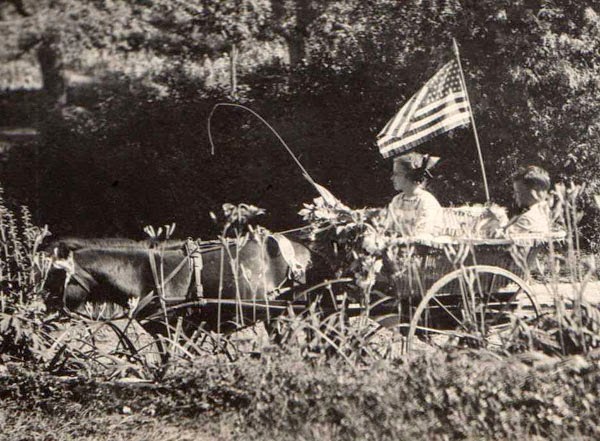 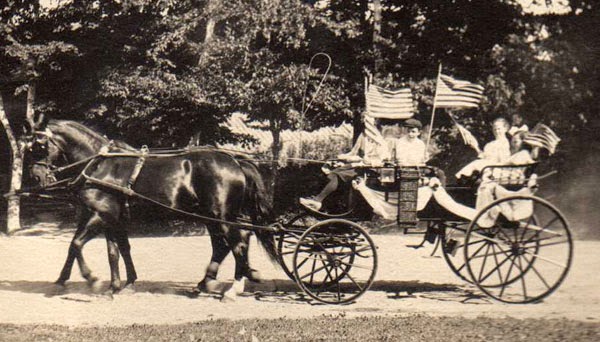 Oberon, driving Ginger and Blue Blazes in Carriole
With Hyacinth and Squash Blossom in back seat
John Lee and Florence and Loyal Betts, with Ruby and Belle in pony wagon

Mercury on a Heaven-kissing Hill
Togo in solitary grandeur 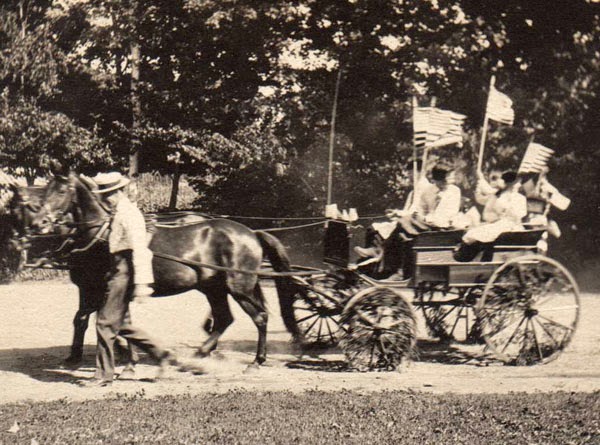 Flower and Other Fairies with the horses of Helios
Driven by Phaethon in the Chariot of the Sun
Sam and Topsy in Charibanc, driven by Charlie Green, and containing the three Maxners and three Greens

It sounds as though it was a glorious Fourth of July indeed!