In our article from June 23, 2014 we examined the history of the first “Chicago Museum” which opened in December 1874.  In this installment, we shall examine the career of its architect, Thomas Tilley, as well as the second Chicago Museum. 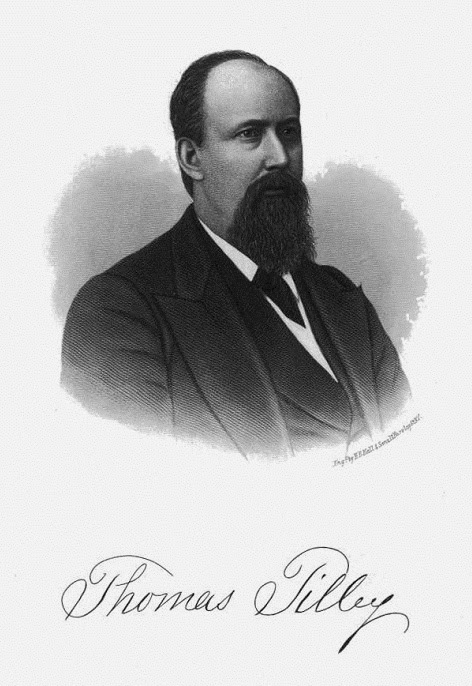 THOMAS TILLEY
Architect Thomas Tilley was born in Cambridgshire, England in 1834 and came to Chicago at the age of three in 1837 with his mother, who had been recently widowed.  She remarried, and Tilley grew to adulthood on a farm at Northfield.  By 1856, he had established himself as a carpenter and builder, headquartered on Fulton Street.  He travelled extensively in the South teaching architectural drawing and stair building until the start of the Civil War when he returned to Chicago.

In 1862 he enlisted in the Third Board of Trade Regiment, and as a result of severe exposure suffered months of illness, which resulted in paralysis and his subsequent discharge and return to Chicago.  After he recovered, he resumed his building business, forming a partnership with J. M. Armstrong known as Tilley and Armstrong.  By 1866, he abandoned building and focused solely on architecture.  He entered several prominent competitions including those for the War Department building in Washington D.C., the State Capitols in Illinois and Iowa, and for the wings of the County Courthouse in Chicago.  Among his early works was the Dearborn Street Theatre, which was lost in the fire of 1871.  Tilley formed a new partnership with William Longhurst in the spring of 1871; they lost everything in the Chicago Fire.  Immediately they moved into the Nixon building, the only building remaining standing in downtown, and they were quickly inundated with business.  They designed many buildings constructed in the burnt district prior to the dissolution of the partnership in 1872. 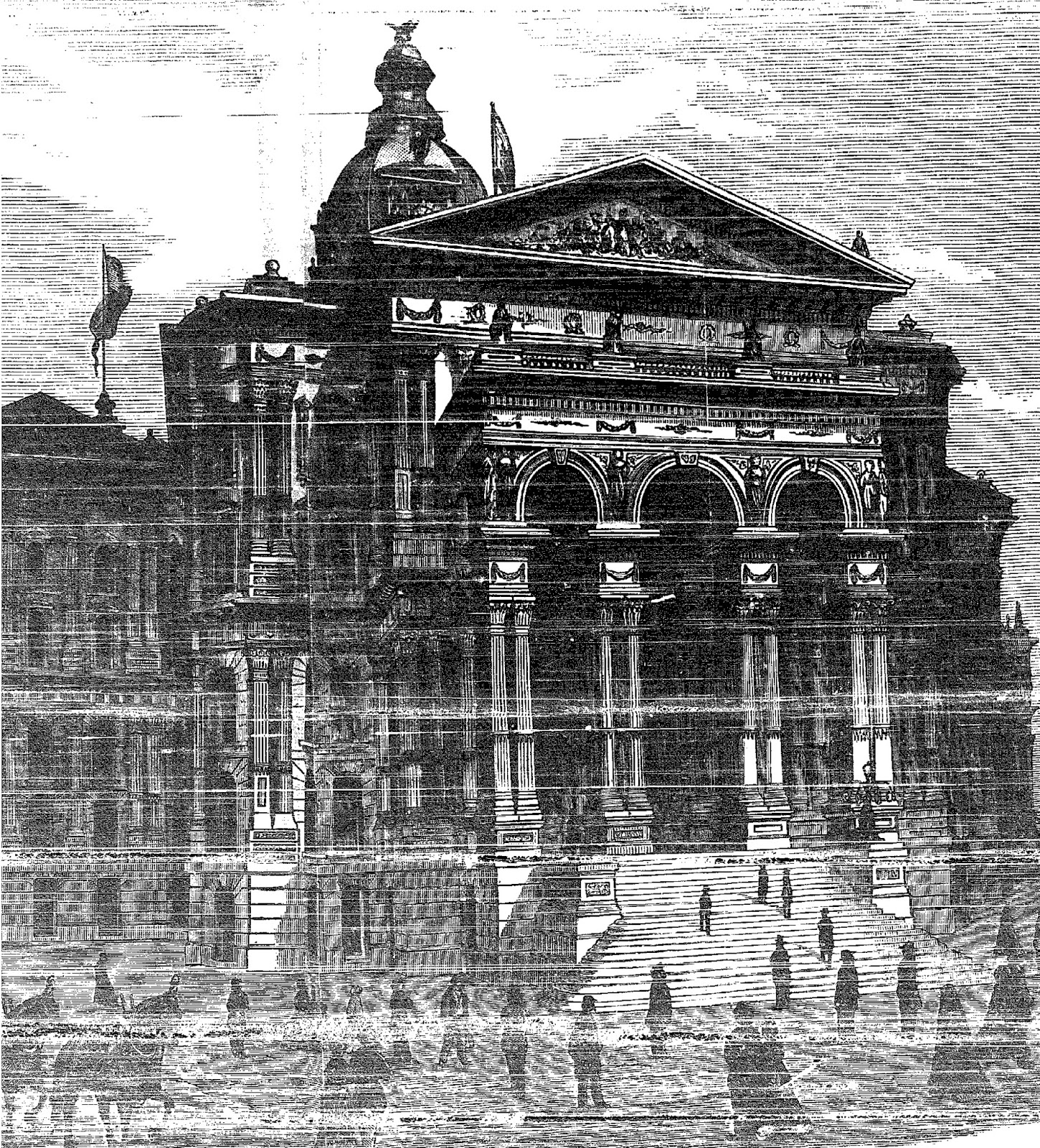 Late in 1872, Tilley began to work on his design for the new County Courthouse which was submitted in March 1873 as part of a major competition.  Nearly twenty plans were submitted including those by Burling and Adler, William LeBaron Jenney, Henry Lord Gay, Wheelock and Thomas, and Armstrong and Egan.  Tilley’s plan, known as the Eureka plan and illustrated above, won third prize in the competition and Tilley was given the commission over Otto Matz, who had submitted the winning design.  Tilley however was asked to make significant modifications to his design, which he estimated would cost $2.8 million.  He drew up specifications for the excavation and supervised the beginning of construction.

In August 1873, the Chicago City Council adopted Tilley’s plan for their half of the new complex.  In what became a very complicated ordeal, Tilley was ultimately removed as architect for both halves of the building.  James J. Egan, whose design did not win a prize in the County competition, was named architect for the county building, and John Van Osdel was hired as architect of the new City Hall, which was designed to match Egan’s building.  By the time the entire building was complete, the cost surpassed $4 million.  Tilley sued the city in 1880 and was awarded one-third of his total fees, amounting to $13,000.

It was in 1874 that Tilley was given the commission for the first Chicago Museum.  Tilley remained active as an architect for several years following, and in spite of his considerable output, no buildings of his are known to be standing today.  He died in 1908 just before his 74th birthday.

THE SECOND CHICAGO MUSEUM
The new Chicago Museum was announced in an article in the Chicago Tribune on November 18, 1883.  No indication was given that it was connected with the first Chicago Museum in any way other than in a common name.  The opening was scheduled for November 26th, with the enterprise located in McCormick Hall.  That building was constructed in 1873 from plans by W. W. Boyington and stood at the northeast corner of Clark Street and Kinzie Street.  The frame structure measured 80 by 120 feet and was four stories in height, with full basement.  (Although it was built after the Fire, it was a frame structure as the new fire regulations forbidding frame construction did not extend north of the river until 1874).

The article announcing the opening provided potential visitors with a view of what they might expect when they visited:

“The new museum which is to open Monday, Nov. 26, at McCormick Hall, will occupy nearly all of the building, with the main entrance on the ground floor.  It seems that it is not be a low-priced institution, but a regular legitimate museum, with its own dramatic company and orchestra, and two regular performances daily.  The auditorium as remodeled is one of the largest and most commodious of any museum in the world, containing about 1,800 folding opera-chairs, elegant stage appointments, etc.  The means of exit in case of fire are excellent.  The company has already been secured, the orchestra engaged, and many of the curiosities are already here, rendering it certain that the opening will positively take place Monday evening, Nov. 26.  The main entrance is being beautifully decorated.  Sixteen electric lights are being placed in position inside and outside the building, and large pictorial signs will nearly cover the whole outside of the building within a day or two.  Mr. W. C. Coup, who built the hippodrome and aquarium in New York, and has an established reputation as a circus-owner and manager, has never been connected with anything but large enterprises, and his name at the head of the venture indicates that Chicago will have in the new museum one of character and magnitude.”

A second article, which appeared in the Tribune the day before the opening provided further information:

“Those people who have visited old McCormick Hall will be greatly surprised at the change it has undergone if they visit it when it is reopened as the Chicago Museum by Messrs. Coup & Uffner. . . The front of this store has been torn out and the entrance partition set back about twenty feet, while the rotunda thus formed has been tastefully decorated.  In the centre of the entrance partition is the box-office, and on either side are swinging double doors leading into the first exhibition hall, which occupies the entire length of the store and is filled with glass cases of various things belonging to the collection of Prof. Worth.

“Leading up from this is a wide is a wide stairway into the second exhibition hall, on the second floor, where the human curiosities will be shown and the lectures delivered.  Off from this are two other exhibition halls, a chamber of horrors, and the museum offices.  The museum occupies the entire second floor with the exception of two or three offices on the Clark street side, which will be acquired in time.

“Two wide stairways, one on either side of the building, lead up to the auditorium, and here the changes made are most apparent.  The shallow platform from which local orators have been used to spout politics has been changed into a roomy stage, fitted up with well-painted scenery and accessories.  A neat proscenium area has been erected, and on either side of the stage are five dressing-rooms, fitted up with all conveniences.

“It is proposed to put upon the Clark-street front of the building a sign, bearing the word ‘Museum,’ which occupies 3,000 square feet of canvas, and to put between the windows all around the building immense pictures of curiosities.” 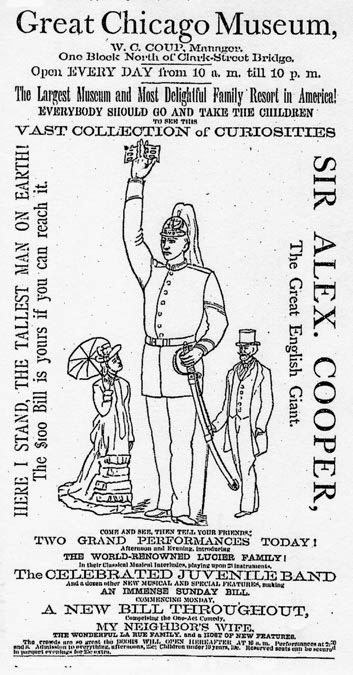 The museum was well received by the public, and over 10,000 people attended performances there during the first week.  The newspapers were filled with regular advertisements for various performances and “curiosities.”  An example is the illustration above depicting “Sir Alex. Cooper, The Great English Giant” with the challenge “Here I stand, the tallest man on Earth!  The $100 bill is yours if you can reach it.”

In March 1884, one particular curiosity attracted a great deal of attention:

“Barnum’s Old Woolly Horse – Manager W. C. Coup, of the Chicago Museum, has secured what is claimed to be the original woolly horse which did a great deal to build up Barnum’s reputation as a showman.  The animal is said to be 43 years of age, and certainly looks it.  Of a light bay, the horse’s hair all over his body is from three to seven inches in length, and it curls in a manner which gives the brute a very bulky appearance.  His mane and tail will be decked out with colored ribbons, and he will be placed on exhibition at the museum today.  This is the same horse so well advertised and exhibited by Barnum many years ago.”

Other attractions during 1884 included a baby show, where babies were put on display and visitors could vote in many different categories.  A “Bazaar of Nations” featured people from remote corners of the world placed on display in native costume for all to see.  Advertisements for the Museum continued on a regular basis through 1885 but it closed soon after and by mid-1886, the building was occupied by the Casino Theater.  In October 1889, H. R. Jacobs' Clark Street Theater opened in the building.  It was subsequently known as the Kinzie, Star, Victoria, and American Theater, and final Sid Euson's Burlesque House.  Euson closed the theater in 1910 at which time he became a Christian Science practitioner.  The building was subsequently torn down and replaced with a parking lot.