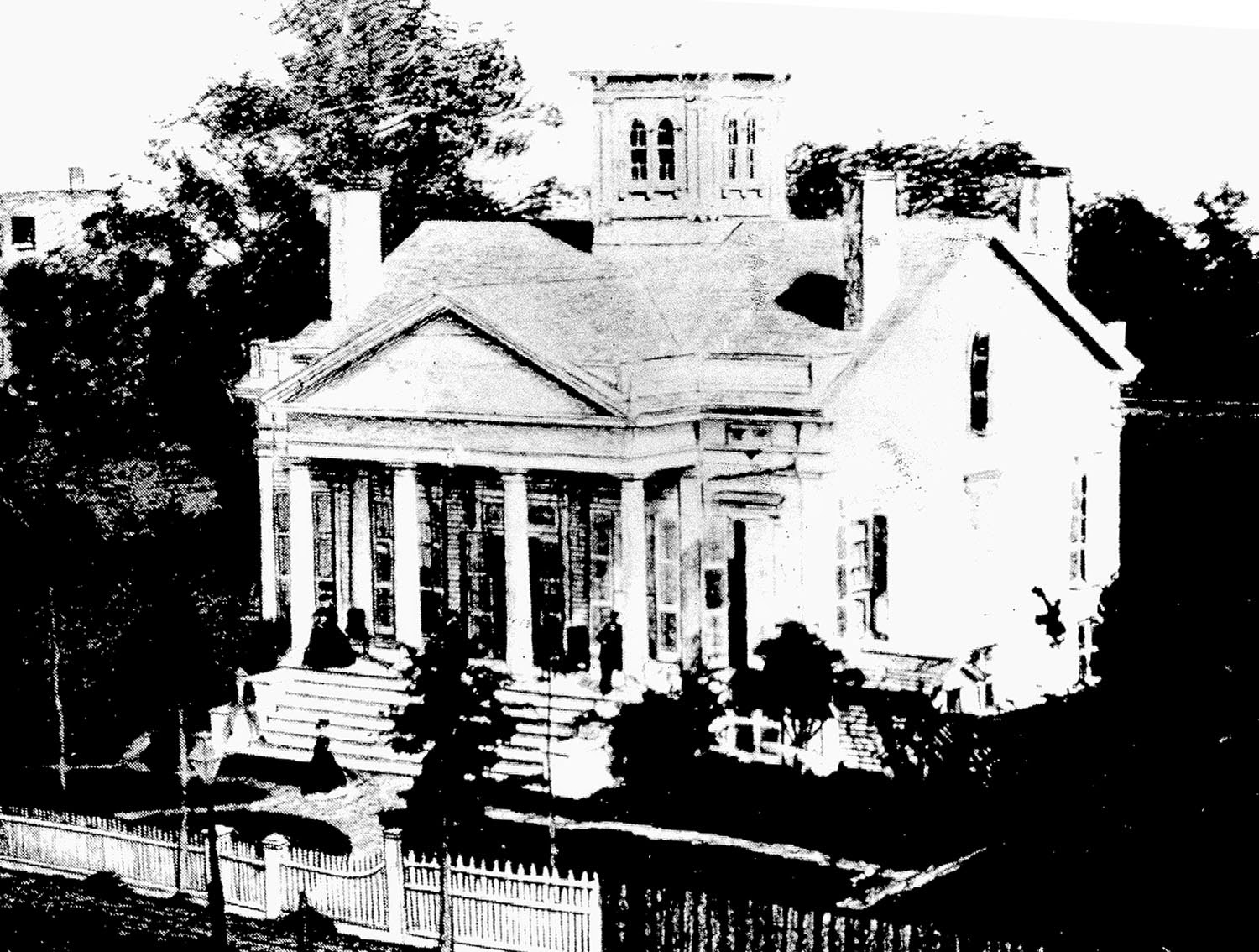 The move of the Clarke House to its current location in 1977 is well documented.  This, of course, was the second time the house had been moved.  In this article, we will examine the first move of the house in the spring of 1872.

After the death of Caroline Clarke in January 1860, her children continued to reside in the house.  This included daughter Mary, and her husband Frank Williams, who moved back into the house so that Mary could care for her younger siblings.  The Great Chicago Fire in October 1871 spared the house and surrounding neighborhood, but within months, the family decided to sell the family homestead.

The three acres of land on the east side of Michigan Avenue south of 16th Street on which the house stood were sold to St. Paul’s Universalist Church.  Their building had been lost in the Fire, and like many congregations, they were looking to rebuild farther from downtown and within the growing residential district on the south side.  The house itself was sold to John Chrimes, a tailor, who also purchased an empty lot nearly four miles to the south at 4526 S. Wabash Avenue on to which he would move his house. 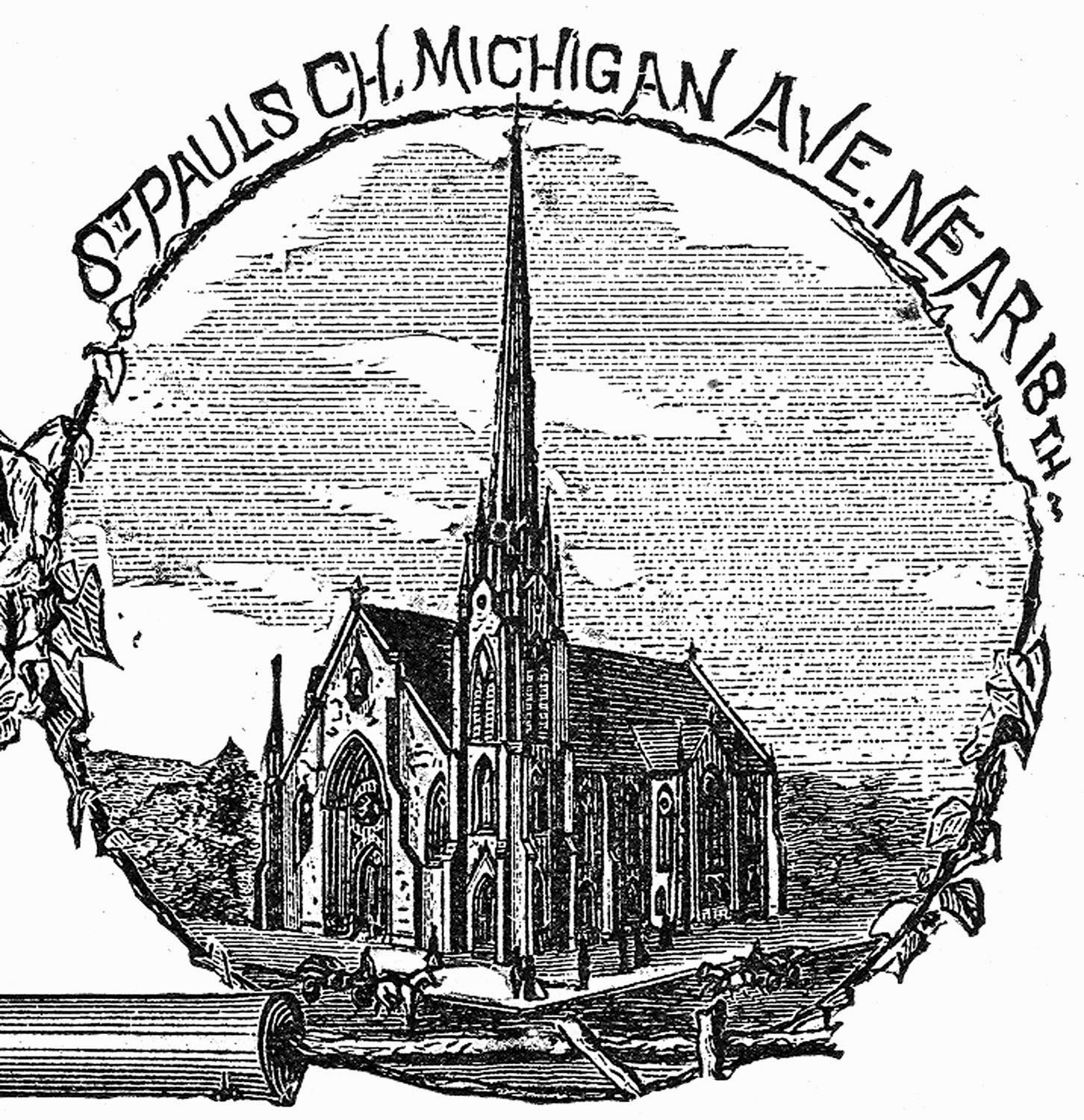 The house had been a prominent and familiar landmark in Chicago since the time it was built in 1836.  As such, its relocation was the source of great interest, and the Chicago Tribune published a lengthy article about the history of the house and the period in which it was built.  Excerpts of that article entitled “The Clarke House.  Another Old Landmark About to Pass Away,” published May 26, 1872 follow.

“Thirty-six years ago Henry B. Clarke was building a $10,000 house on the southern lake shore.  It was a great feather in the cap of the South Division, then very much crowed over and overslaughed by the domineering North Side.

“So it was timely and helpful, from a South Side point of view, that Henry B. Clarke commenced his ten thousand dollar house on the lake shore.  The house, so long a landmark is now being removed to give place to a stylish city church, that of St. Paul’s Universalist Society, which is to adorn the east side of Michigan avenue, in the block between Sixteenth and Eighteenth streets.

“The Clarke homestead originally fronted east, looking out on the lake.  A picket fence and a cordon of tall poplars made the inclosure, of which the entrance was near what would now be the extension of Prairie avenue.

“And now the Clarke home is to be replaced by the Universalist Church, that twenty years ago was in the residence suburbs of the city on Washington street, between Dearborn and Clark.”

In the mid-1850s, when improvements were made to the house, the west facing side of the house became the main entrance to face Michigan Avenue, and a large portico, to match the original east facing portico, was constructed.  In preparation for the move, both of these porticos were removed.  A second lengthy article in the Chicago Tribune dated June 9, 1872 and entitled “The Clarke House. Discovery of Interesting Papers” detailed the discovery of a time capsule Henry B. Clarke had placed inside one of the columns as the east portico was being completed in January 1839.  The article read in part:

“When Henry B. Clarke was building the Clarke House, the well-known landmark, now on its way to Forty-seventh street from its site, since 1836, on Michigan avenue, at Eighteenth street, it will be remembered, from our recent sketch, that the crash of 1837 had some influence in the way of postponing the completion of the structure, and it was not until the winter of 1838-9 that Mr. Clarke finished the handsome full portico on his east front.  It was not for many years later, until Michigan avenue was opened in the rear of the house, that this portico was exactly repeated on the west, and, as it proved subsequently, principal front.

“Upon the sustaining core timber of one of the large fluted columns, it has, within a few days past, been discovered that Mr. Clarke spiked solidly, with two tenpenny nails driven straight through the package, a bundle of papers that now, for the first time in over thirty-three years, has seen the light of day.  The location was high and dry, and all the papers are as bright and clear as on the day they were wrapped up in this memorial.  It may be readily imagined that the Clarke family opened these papers with a vast deal of interest.  The packet consists of manuscript, currency, a tax-receipt, family memoranda, a memorial to Martin Van Buren, and a selection of newspapers of the day.

“In Chicago, since these tenpenny nails were driven, on a prairie, with scarcely 2,000 inhabitants, the children named in the Clarke family memoranda have lived to see a city of 300,000 send its outposts six miles below their once isolated suburban home.  Why will not the house-builders of to-day imitate the excellent example of Henry B. Clarke, and seek some means for the preservation of our current memoranda? . . . Mr. Clarke’s package has taken its place in the family archives as a relic it will not be easy to equal in interest or value.”

The items enclosed included a letter recommending Clarke’s appointment for the office of “receiver of Public Monies at the Land Office in Chicago, in the event of a vacancy occurring in that office.”  Clarke also included a tax receipt showing that he had paid his taxes in the amount of $7.50 for the year 1838.  A handwritten memorandum listed the members of the Clarke family along with a notation “My dislike for paper-promises to pay, I desire to be known.  I inclose one of the coots.”

This latter statement referred to a $5.00 paper bank note issued by the Kirkland Safety Society of Kirkland, Ohio – the Mormon financial institution of Joseph Smith.  The notes had been issued in connection with the construction of the Mormon’s $60,000 Kirkland temple, but not being backed by hard currency, were rejected by Chicago banks and merchants. 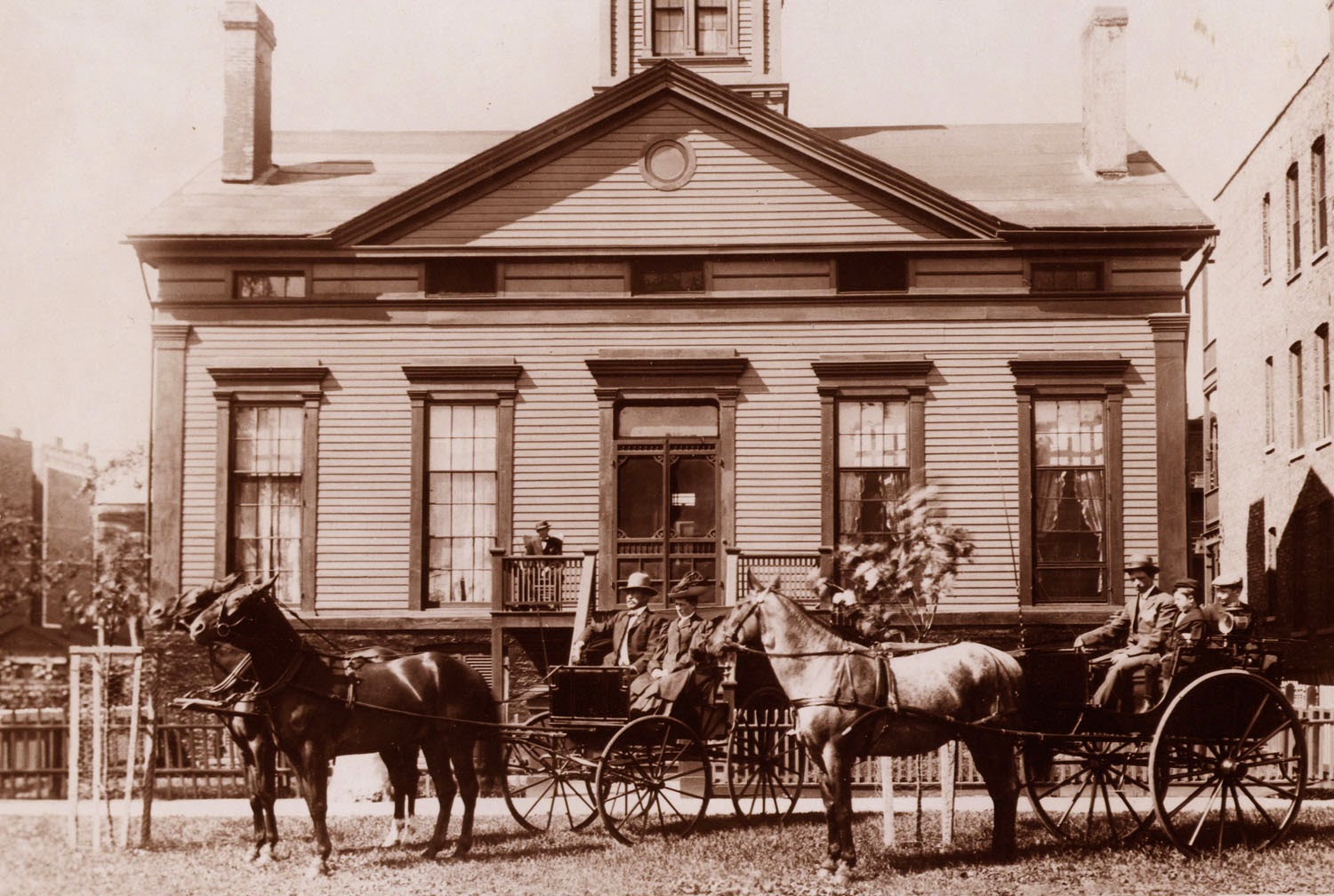 The house after its move to 4526 S. Wabash Avenue
with members of the Chrimes family in the foreground
(Courtesy of Clarke House Museum)

The house was placed on its new foundation in June 1872.  There were a few significant changes to the house as a result of the move.  The new foundation was a bit taller than the original, as indicated by the fact that the front entrance was reached by a flight of eleven steps, as opposed to eight as originally built.  In addition, the two porticoes were not rebuilt at the new site; they were replaced by open porches, and small entry vestibules were constructed at both ends of the main hall.  And the house was painted brown.  The most interesting change involved the orientation of the house.  Since it now sat on the west side of the street, the original east facade once again became the main front entrance for the house.  Three generations of the Chrimes family occupied the house until it was sold in 1941.

Next week:  The second move of the Clarke House in 1977
Posted by Glessner House Museum at 7:48 PM