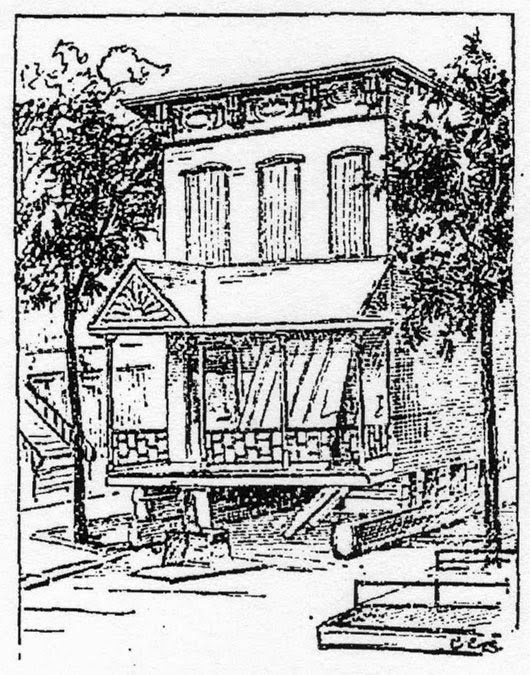 The landmark Harriet F. Rees house, designed by Cobb & Frost, was built at 2110 S. Prairie Avenue in 1888.  Later this month, plans call for lifting the four-story masonry structure off of its original foundation and relocating it one block to the north where a new foundation will be prepared at 2017 S. Prairie Avenue.  All of this is being done in preparation for construction of the new DePaul Arena which will occupy the entire block on which the house currently sits.

Although the idea of moving a house is intimidating, the practice was actually quite common in the late 19th century.   In 1891, another house was moved along the 2100 block of Prairie Avenue and the episode created quite a stir amongst the residents at the time.  The long forgotten controversy is recorded for posterity in two articles published in the Chicago Tribune that year.

On September 14, 1891, the Tribune reported the situation in an article entitled “Prairie Avenue Residents Up In Arms – A House-Mover’s Disrespect for Stately Old Elm Trees.”  In this particular situation, Prairie Avenue was merely being used as the route between the original site of the house on Michigan Avenue and its new site at 46th Street and Indiana Avenue.  The article read:

“A dilapidated wreck of an old frame house completely blockades Prairie avenue, so far as traffic concerned, just south of Twenty-first street.  It has been standing there, covered with dirt and cobwebs, a very beggar of a house among the handsome residences of John B. Sherman, P. D. Armour, Eugene S. Pike, R. W. Roloson, M. M. Rothschild, and Mrs. E. J. Kimball, for the last three days.  It would have been out of this neighborhood long ago, but Mr. Armour, Mr. Pike, et al. will not permit it.  Not that they admire the old hulk, but they do not desire to have the stately old elms in front of their homes ruined.

“It had hardly passed Twenty-first street before a number of branches of the trees in front of Mr. Pike’s residence, No. 2101 Prairie Avenue, were broken off.  It is still jammed hard against the limb of another of Mr. Pike’s trees, where it was stopped by order of the Street Department in response to angry remonstrances of Phillip D. Armour of No. 2115.  Mr. Armour didn’t want to have his trees torn down by the building and he called on Commissioner Aldrich to protest against the further progress of the house in that direction.  Superintendent of Street Obstructions Bell ordered the house-mover to take the house down Twenty-first street to some street where it will cause less trouble.

“The building is owned by Tim Keefe, and was being taken from No. 1833 Michigan avenue by Building Mover William Kruger.  The permit was issued Aug. 15 to expire Aug. 31 and he did not secure its renewal until Sept. 11, a day after the injury to Mr. Pike’s trees was done.  The permit was for a house twenty-two feet wide, but one of the residents of the avenue who went to the trouble of measuring the building found that it is twenty-nine feet four inches wide, while the street is but thirty-two feet from curb to curb.

“’The City of Chicago,’ he declared, ‘had grown so large that we should no longer permit the removal of frame buildings over our streets.’”

This photograph shows where the house was stopped during its move.  Shown from left to right are the houses of Max Rothschild (2112), Harriet Rees (2110), Mark Kimball (2108), John B. Sherman (2100) and Ebenezer Buckingham (2036).  The image dates to the early 1890s, so may well show the trees after they were damaged by the house move.

Troubles continued for Mr. Keefe, the owner of the house in question, as indicated by a second article entitled “Objects to Official Interference” which appeared six weeks later on October 27, 1891:

“Thomas H. Keefe bought a frame house at No. 1833 Michigan avenue, and hired William Kruger, a house mover, to transfer the building to Forty-sixth street and Indiana avenue.  The Street Department gave permission to move the house along Prairie avenue, but at Twenty-sixth street objections were made, and the building was turned back and sent down a side street.  Since then Keefe says progress has been stopped every few blocks by either the police or other city officers, and the building now blocks traffic on Forty-sixth street within a stone’s throw of its destination.  Yesterday Keefe and Kruger went into the Superior Court and sought to restrain further interference by asking an injunction against J. Frank Aldrich, Hempstead Washburne, Richard W. McClaughry, Nicholas Hunt, James E. Burke, and the city.”

No further information appears in the Tribune about the house, but presumably it was soon after moved the last few feet to its new location on Indiana Avenue, and the matter was finally put to rest.

Next week:  The first move of the Henry B. Clarke house in 1872
Posted by Glessner House Museum at 10:53 AM