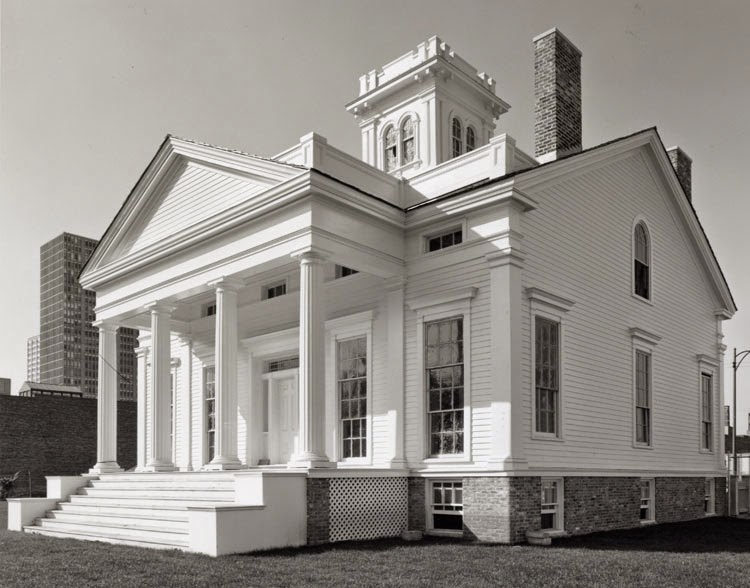 Last week, we looked at the first move of Chicago’s historic Clarke house in 1872.  This week we will examine the second move of the house in 1977.

After the 1872 move, the house continued to serve as a private family residence for generations of the Chrimes and Walters families.  In 1941, it was sold to Bishop Louis Henry Ford and the St. Paul Church of God in Christ.  They used the building for church purposes and the Bishop’s residence for the next 35 years.  Respectful of its history, they celebrated the birthday of the house each year.

Discussions surrounding the creation of the Prairie Avenue Historic District were underway by 1970 when both the Clarke and Glessner houses were designated landmarks by the city of Chicago.  Within two years, the city began negotiations to purchase the Clarke house from the church and move it from its location at 4526 S. Wabash Avenue, where it had stood for 100 years, back to its original neighborhood.

The move almost stopped before it started.  On Monday January 31, 1977, fire broke out in the basement of the building.  Fortunately there was no major structural damage, and the many layers of paint on the interior moldings protected them from the blaze.  Three days later, an article in the Chicago Tribune announced that the city was continuing its negotiations to purchase and move the house, in spite of the fire.

In late August, detailed plans were announced for the move of the house later in the year.  Wilbert Hasbrouck, a respected preservation architect was retained by the city to oversee the move and the restoration of the house at its new site at 1827 S. Indiana Avenue.  He undertook an extensive analysis of the house and its structure, to determine exactly how the house could be moved, and how it would be restored to its original 1836 appearance.

Ironically, the 1977 move proved much more difficult that the earlier move, due to the presence of power lines, street lights, and most significantly the elevated train tracks.  The tracks of the Englewood-Jackson Park L (a.k.a. the Green Line) stood a few blocks east of the house and would have to be crossed.  Numerous moving techniques were considered and dismissed – dismantling the building into three layers; utilizing the railroad rights-of-way; and using a barge on Lake Michigan for part of the move. 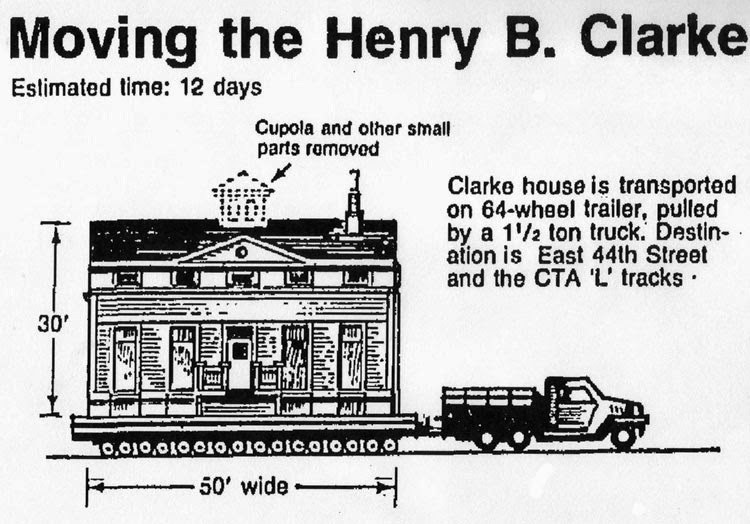 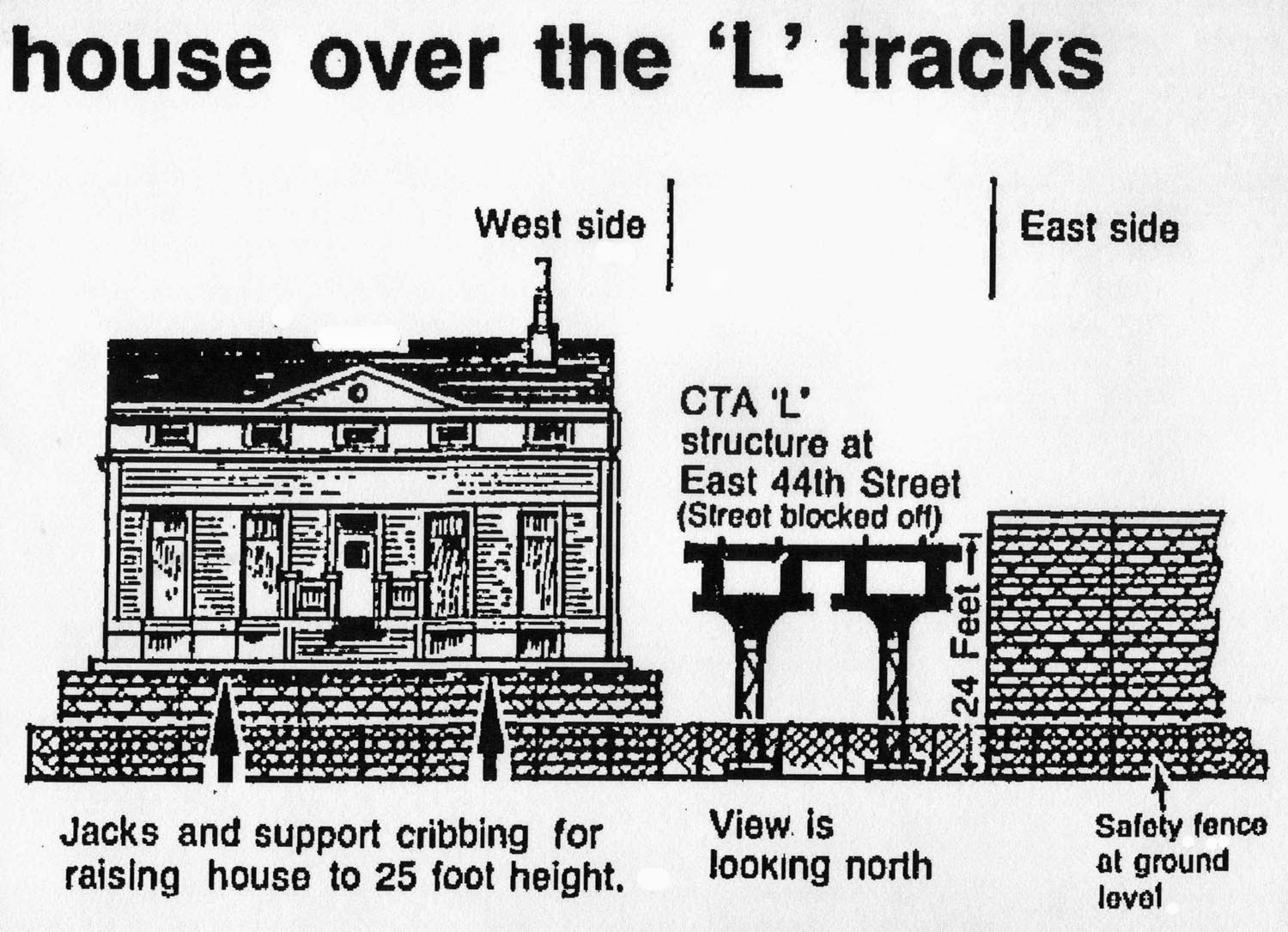 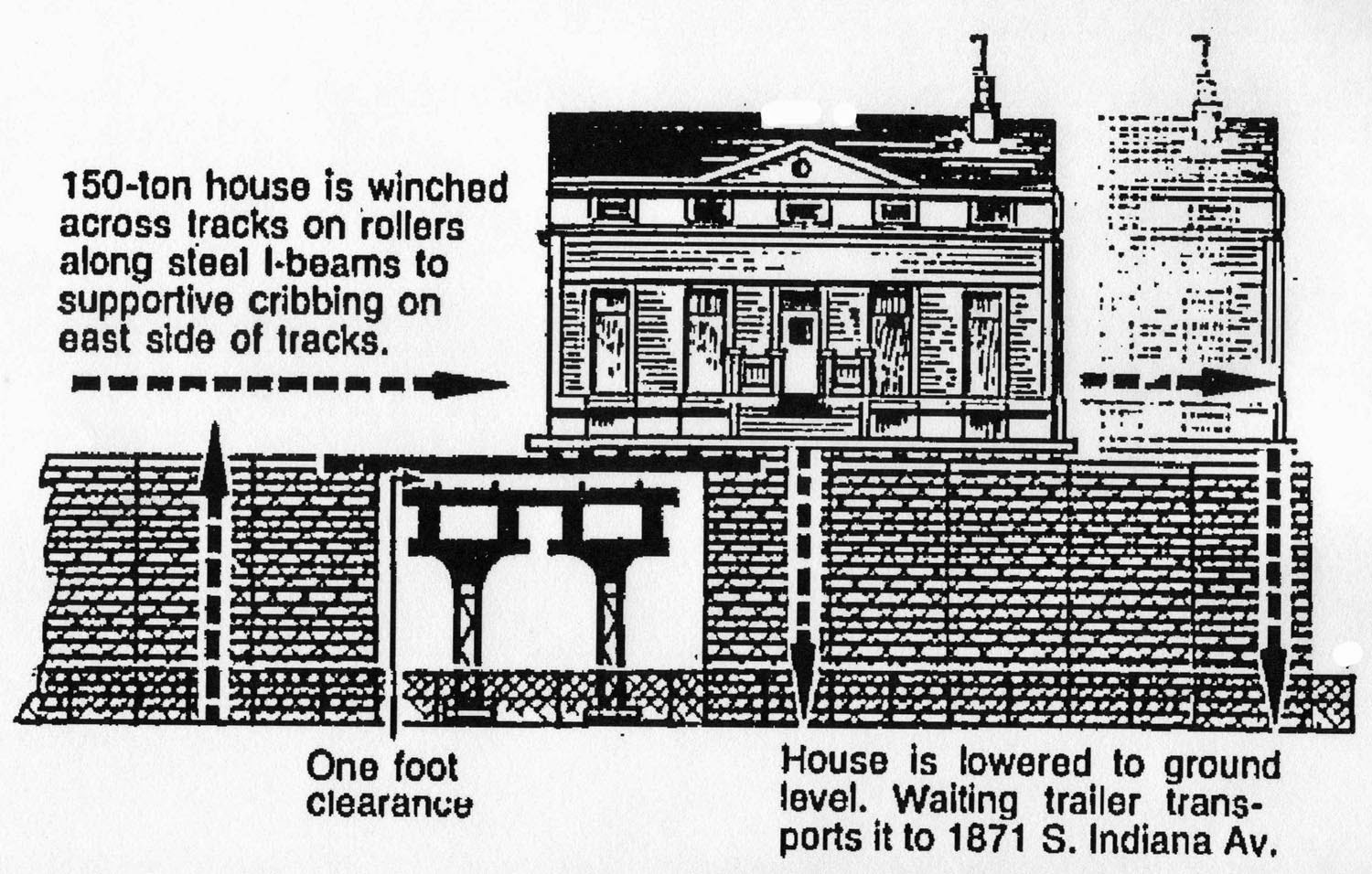 Ultimately it was decided to raise the house 25 feet and slide it above the el tracks using an elaborate combination of jacks and support cribbing.  The diagrams above, which appeared in the Chicago Tribune on August 20, 1977 showed the basic steps:
-remove the cupola, porches and other small parts of the house;
-place the house onto a 64-wheel trailer, pulled by a 1-1/2 ton truck;
-move the house onto jacks and support cribbing on the west side of the el tracks which crossed 44th Street between Prairie and Calumet avenues and raise it a foot at a time to a height of 25 feet;
-winch the house across the tracks on rollers along steel I-beams to the support cribbing on the east side of the tracks, and then lower the house a foot at a time back down to the ground and onto the 64-wheel trailer;
-complete the move via trailer to the new site. 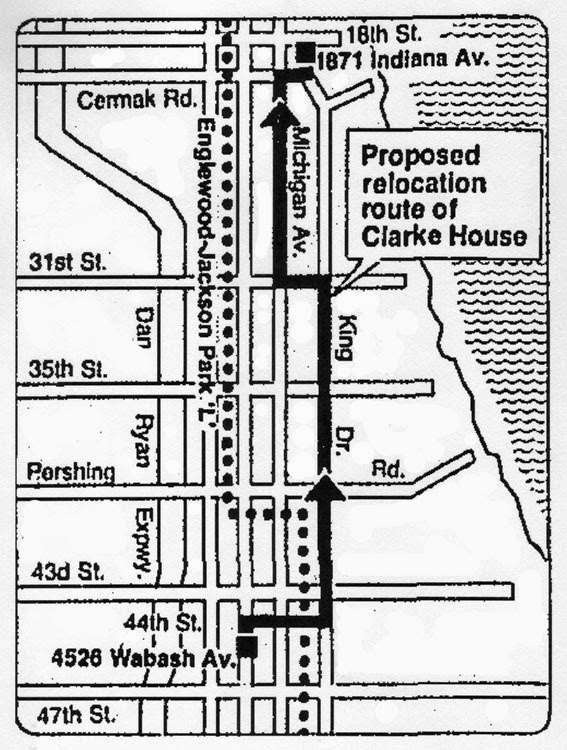 It was anticipated that the move would take approximately 12 days.  On the first day, the building, which weighed 120 tons, would be placed on the trailer and moved at a walking speed to the west side of the tracks.  Five days would then be needed to jack up the house to a height of 25 feet – one foot higher than the tracks.  The next day, the house would be winched across the tracks, a move that would only take about 30 minutes.  Then five more days to move the house back down to the ground, and finally one more day to complete the move onto extra-wide footings at its new location. 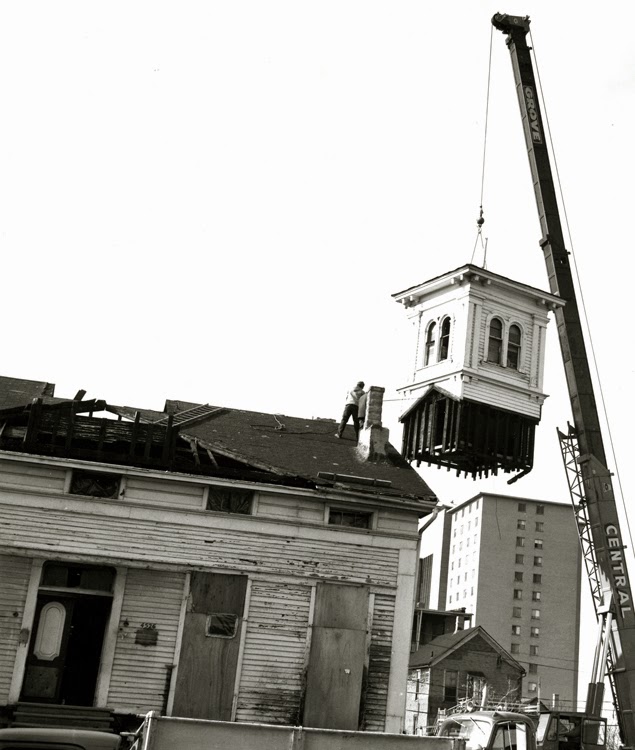 November 18: Removal of the cupola

The move began on Wednesday November 23, 1977, the day before Thanksgiving, at which time the house was moved as far as the tracks on 44th Street.  Everything proceeded accordingly to plan (although small pieces fell off the house at various points along route) and the structure was ready to be winched across the tracks.  At one minute after midnight early on Sunday December 4th, the electric power was shut off on the el tracks and the house was slowly pulled across the tracks.  A crowd of 2,000 people gathered to watch the event, despite the bitter cold temperatures. 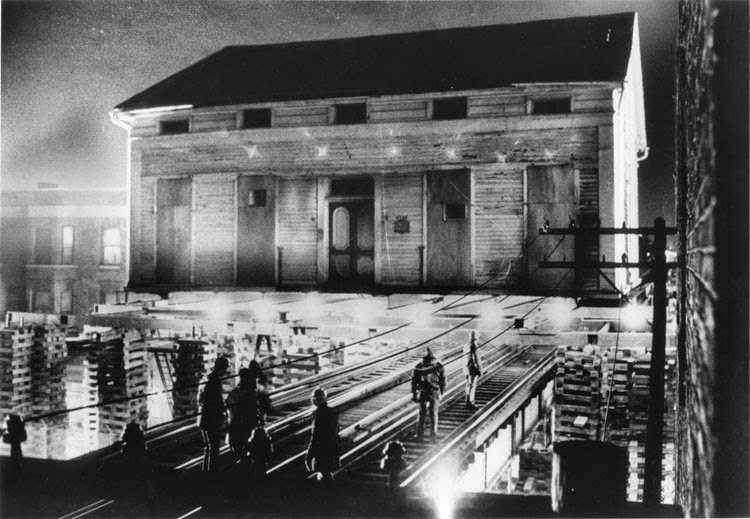 December 4: The move over the Green Line tracks

The temperature created a problem.  After the house was move onto the cribbing on the east side of the tracks, it was discovered that the hydraulic jacks had frozen.  The house would sit suspended in mid-air for the next two weeks, surprising commuters who encountered the house at eye level as they crossed the bridge at 44th Street. 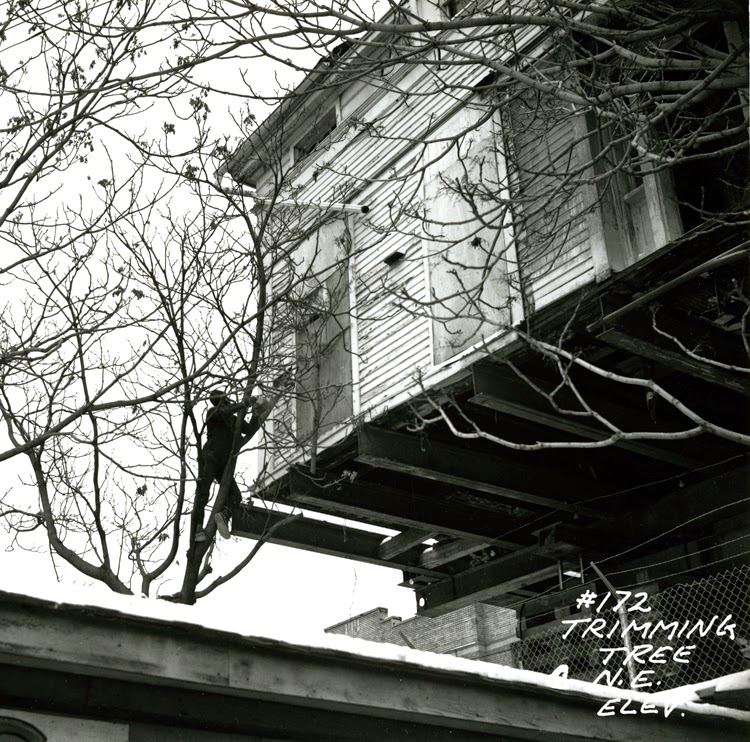 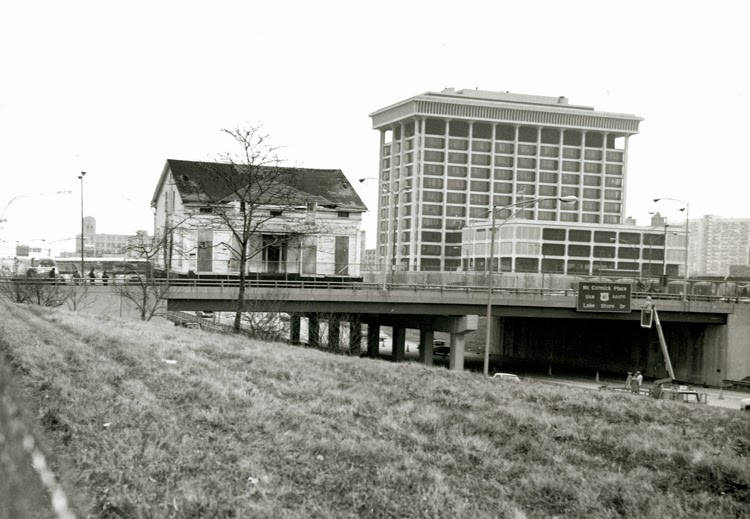 December 18: Crossing the Michigan Avenue bridge
over I-55 at 25th Street

Finally, on Sunday December 18th, the house was moved the last leg of its journey and placed on to its new foundation.  The final cost of the move was $410,000.  An extensive restoration was undertaken over the next 4-1/2 years, in a partnership between the City of Chicago which owned the building, The National Society of The Colonial Dames of America in the State of Illinois which agreed to furnish the house to the time period, and the Chicago Architecture Foundation which would operate the tours in conjunction with Glessner House Museum, which they owned and operated at the time.  Robert Furhoff undertook an extensive analysis of the interior of the house, uncovering original paint layers and wallpapers which were replicated in the restoration.  One of the most significant projects was the recreation of the east portico, based on the one historic photograph that survived showing the house during the occupancy of the Clarke family, dating to the mid-1860s.

The house opened to the public as an historic house museum in 1982.  In 2004, additional restoration work was completed including the recreation of the matching portico on the west side of the house.