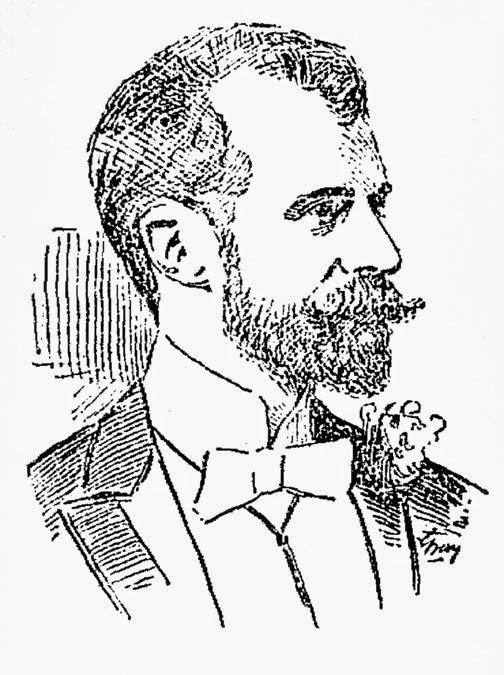 On February 16, we began a discussion of Frances Glessner’s training in making jewelry and silver, including information on her teachers Madeline Yale Wynne and Annibale Fogliata.  This week we shall look at her third and final teacher, Frederik W. Sandberg.

It appears that she engaged all three instructors within a short period of time.  Her first lesson with Wynne was in December 1904 and she was working under Fogliata less than a year later.  The earliest mention of her working with Sandberg is found in a journal entry dated February 5, 1905:

“Friday I had my silver lesson.  Then Mr. Sandberg came by appointment.  I had a very pleasant talk with him.  We finished the plate and cover for Mrs. Thomas Longfellow’s wine glass.  In the afternoon we went to the concert.”

The journal entry would indicate that her silver lesson was not given by Sandberg, but by Madeline Yale Wynne, as Sandberg clearly arrived after the lesson.   Together, Frances Glessner and Frederik Sandberg worked on the plate and cover for a wine glass, and their relationship was close enough by that time that they attended the afternoon orchestra concert together.

Exactly when Frances Glessner came to know Sandberg, a native of Sweden, is not documented, however a letter from Sandberg dated January 21, 1905 indicates that she had made purchases of his items from a recent exhibition at the Art Institute.  Writing from his home at 120 S. Grove Avenue in Oak Park, Sandberg said, in part:

“Dear Madame:
On the list of sales from my late exhibition at the Art Institute I take great pleasure in noting your name among my patrons and beg to thank you for your kind appreciation.

“I return to Paris in a few weeks and shall be happy to execute any orders for individual artistic designs in jewelry of gold and silver, precious enamels as well as all kinds of objets d’art in repousse, wrought and hammered silver of distinct artistic merit.  Special attention is given to the securing of rare and curious precious and semi-precious stones.

“I have a unique design for a coffee pot to be executed in hammered silver as well as a number of curious XV and XVI century spoon designs which I think you would find interesting.”

Just a month later, he wrote her a second letter:

“I keenly appreciate the delightful privilege of having made your acquaintance and assure you that nothing would give me more genuine satisfaction than to give you whatever assistance you may need to increase the interest in the work you have begun.  You will find this art full of attractive possibilities and with your discriminating taste and enthusiasm it will become more and more fascinating.”

It is entirely possible that Frances Glessner became acquainted with Sandberg several years earlier.  In February 1898, Sandberg delivered a lecture entitled “Art in Silver” at the Art Institute.  An article which appeared in the Chicago Tribune indicated that Sandberg had just returned from an extensive trip to Europe and “is an enthusiast and exponent of the process known as repousse in gold and silver.”  Although Frances Glessner was recovering from surgery at that time, it seems likely that she was at least aware of the lecture.

In January 1901, Sandberg gave a series of lectures, “L’Art Nouveau as Expressed in Industrial Arts at Paris in 1900” at the Art Institute.  Sandberg had served as a jury expert at the Exposition, and was commissioned to prepare the official report on art industries in silver and gold for the United States government.  The Chicago Tribune noted the following about the lecture series:

“L’Art Nouveau, in which great interest has been aroused by the Paris exposition, will be the subject of a special course of lectures by Frederik W. Sandberg.  Mrs. Potter Palmer’s expressed admiration of the new art, together with its appearance in the furniture and jewelry stores in Chicago, created a demand for some exposition of the art which will be answered by the course of six lectures.  Mr. Sandberg received high honors for his work in silver repousse, jewelry, and decoration at the Paris exposition.”

The first lecture, entitled “Modern Antiques” dealt with the topic of fraudulent antiques and how they were made.  Sandberg had stumbled across the thriving industry quite by accident while in Paris, and decided to make a study of it in order to educate Americans travelling to the continent, who were prime targets for the forgers.  He explained, in detail, how paste and beetles were used to make the surface of leather look old (as shown below), how silver hallmarks were transferred to new pieces, and how the grain of old wood was photographed and transferred to new pieces.  The “new antiques” were usually offered to tourists as rare opportunities to acquire valuable pieces from “embarrassed” families who were forced to sell off their cherished objects as a result of financial reverses. 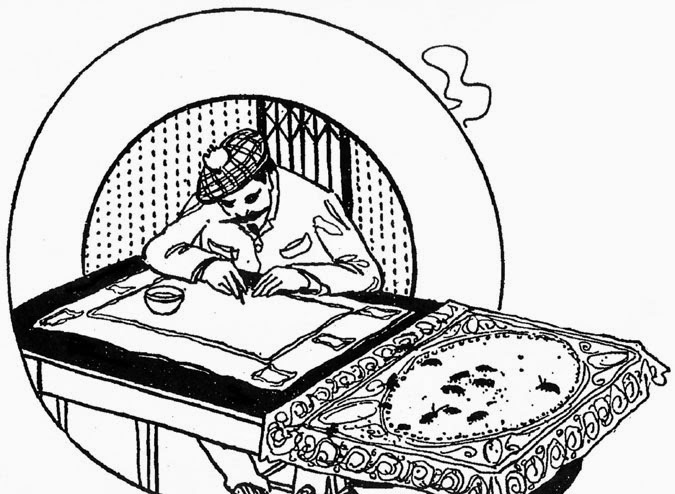 Sandberg exhibited at the 1904 World’s Fair in St. Louis and spent several months in Paris in 1905 before returning to Chicago later that year.  In early December, he visited Frances Glessner, showing her a clasp he had made for her as well as pieces from his fall exhibition at the Art Institute, which included an elaborate chased bowl resting on the heads of three pelicans.

For reasons that remain unclear, it appears that Sandberg decided to abandon his work with metalwork in early 1906.  A journal entry by Frances Glessner dated March 18, 1906 noted:

“After luncheon Mr. Sandberg came.  He offered me his tools and I have bought them.  Mrs. Goldsmith and Miss Trimingham called and as Mr. Sandberg’s wife was an intimate friend of Mrs. Goldsmith’s, they had a very pleasant visit, especially enjoying our Galle glass of which Mr. Sandberg says we have a very fine collection.”

Later in March, Frances Glessner noted spending two full mornings with Sandberg, who instructed her on the use of his tools, after which he stayed for lunch.  He apparently had a considerable inventory of pieces for sale, as Frances Glessner noted purchasing pieces from him more than two years later.   In the last journal entry in which he is mentioned, dated November 29, 1908, she wrote:

Mr. Sandberg came to see me and brought some pieces of work, some of which I bought.  He told me his wife had fallen heir to part of an estate in New Haven upon which stands the Tontine Hotel.”

Frederik W. Sandberg pursued a career as a journalist until his death about 1920.

Posted by Glessner House Museum at 9:18 AM