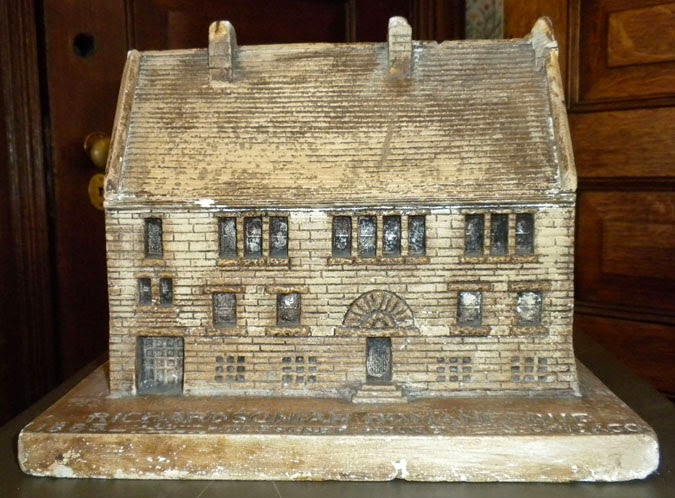 An interesting object in the museum collection is a large plaster model of the house, crafted in the late 1930s.  On display in the Visitors Center, the model is used as a tool to explain the theory behind the floor plan and massing of the house, especially on days when the weather prevents visitors from getting a good tour of the street elevations and courtyard.

The model was one of thousands created by the Museum Extension Project (MEP) of the Pennsylvania Work Projects Administration, organized in 1935.  The purposes for the MEP were explained in the catalog which accompanied the model:

“In the first year of its existence the Work Projects Administration in Pennsylvania gained the distinction of originating the State-Wide Museum Extension type of Project . . . Pride can be taken in the fact that along its original line of activity the Project has produced approximately one million articles primarily designed for visual education purposes in Pennsylvania’s tax-supported public schools, colleges and libraries.  The maps, charts, models and other devices originated by the Project and put in the hands of children are enabling all young minds more readily to get a realistic grasp of vital subjects they may be studying.

“Operating as a segment of the Federal Work Projects Administration the Museum Extension Project in Pennsylvania for several years has tended to give employment to an average of 1,200 persons who otherwise apparently would have been idle.  Through the systematic development of processes that have combined the varied skills of a considerable number of the workers with the opportunity to train hitherto unskilled personnel, the Project has found it possible to create and to offer to the educational world authentic and comparatively complete graphic presentations of the human race’s evolutionary efforts to house and clothe itself.”

The MEP had three main divisions.  The first consisted of the work units in which the items were actually produced.  There were seven work units across the state, including the Pittsburgh unit where the Glessner model was produced.  The models became the property of the schools which ordered them, in order to create Chidren’s Museums.  Since it was not possible to equip every school with all of the materials, the second division of the MEP created regional Children’s Museums.  The third division involved actual museum work – the cleaning, restoring, repairing, and cataloging of objects owned by numerous organizations around the state including the Pennsylvania Historical Commission, Philadelphia Art Museum, Pennsylvania Museum of Natural Sciences, and many others.  The Pennsylvania Project became a model that was copied by many other states.  In fact, the Pennsylvania MEP freely offered to share their blue prints and other plans with any other state MEP who requested them. 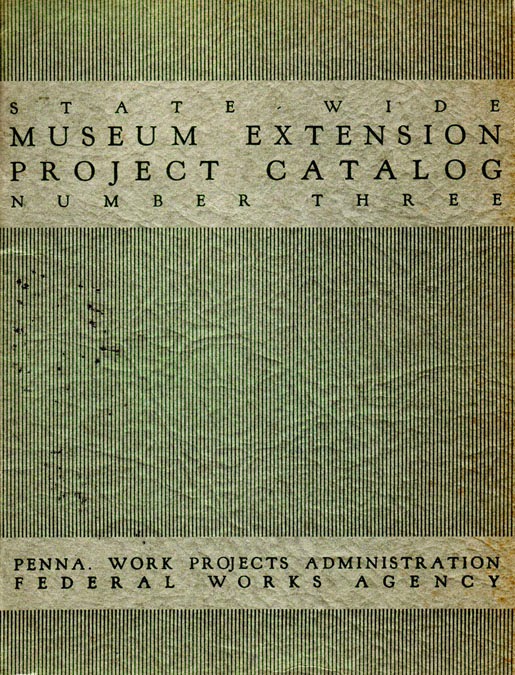 The Glessner house model was offered in the third catalog of the MEP, issued in late 1939.  A review of the table of contents reveals the breadth of materials that were produced:
-Costume Plates
-Flags of the Nations Plates
-Benjamin Franklin Plates
-Architectural Models
-Games
-Maps
-Geologic and Industrial Miniature Models
-Native Handcraft and Handcraft Designs
-Lantern Slides
-Fish Plaques
-Dioramas
-Decorative Panels
-Pamphlets and Handbooks
-Marionettes and Puppets
-Food Models
-Flash Cards
-Materials for the Blind 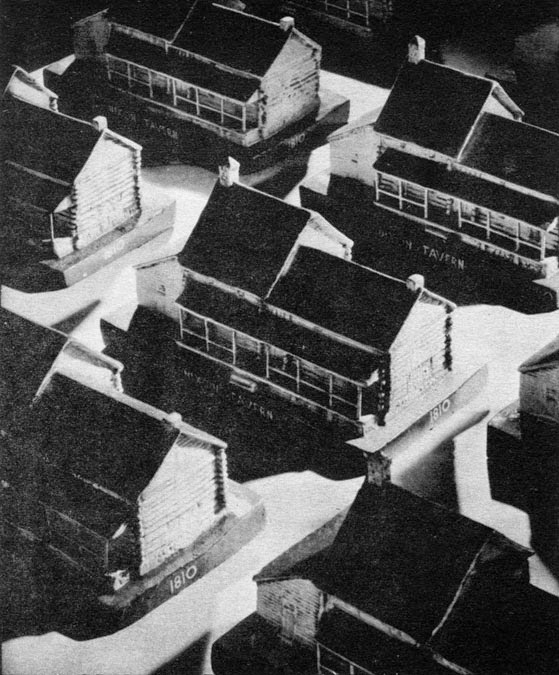 Models of the 1810 Nixon Tavern in
Fairchance, PA awaiting distribution to schools 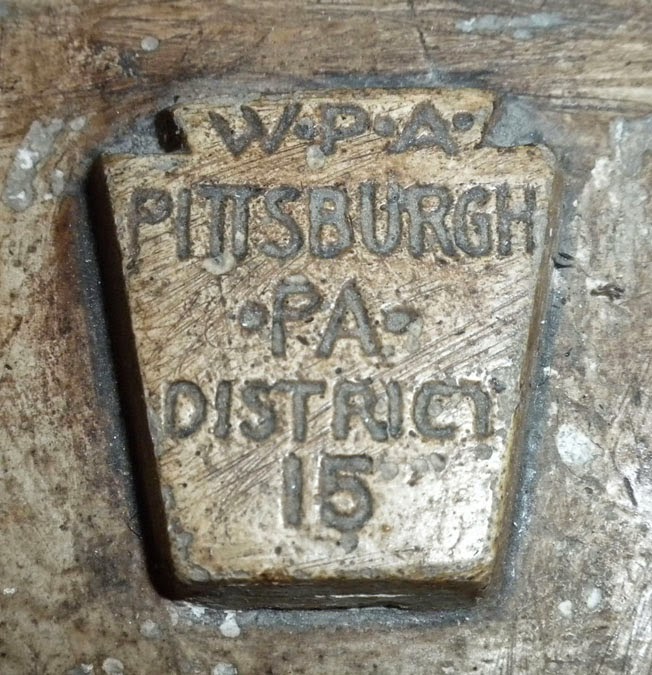 The model bears the official emblem of the WPA.  Instructions for the recipients specifically required that the emblem not be removed or defaced, as they were the “unqualified guarantee of authenticity.”  The Glessner emblem reads “W.P.A. PITTSBURGH PA DISTRICT 15” indicating it was made in District 15, the Pittsburgh office, which was one of the largest and most active in the state.  It was sponsored by the Pittsburgh School Board and occupied a five-story building at 3400 Forbes Street.  A description of the District 15 facility written in 1936 indicated that it:

The Pennsylvania WPA employed approximately 250,000 workers at any one time and nearly 640,000 during the time period of 1935 to 1942, so the MEP was a very small part of the overall work, employing on average 1,200 persons at any one time.  World War II and the need for workers in war-related industries led to the disbanding of the WPA in 1942.

The Glessner model, labeled “Richardsonian Romanesque, 1885 Glessner House, Chicago” is a fairly accurate representation of the house, although there are some differences, such as the absence of the large hayloft dormer on the west side of the house.  These are probably explained by the fact that the architects and designers working on the model were working off of Richardson plans available in libraries, rather than examining the actual building itself.  The design of the house evolved over time, so elements missing in earlier plans were added later; other elements were later removed or altered before construction commenced. 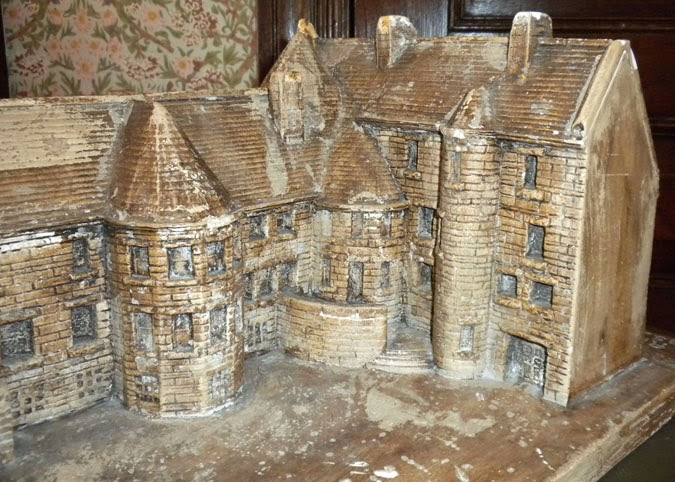 It is not known how many of the original architectural models survive today, although several are owned by the Broward County Library system in Southern Florida.  These include the two models shown below which depict the Palazzo Contarini-Fasan in Venice, and Independence Hall in Philadelphia.  Their website includes additional information on the WPA and the MEP in particular:
Digilab.browardlibrary.org/wpa/aboutwpa.html 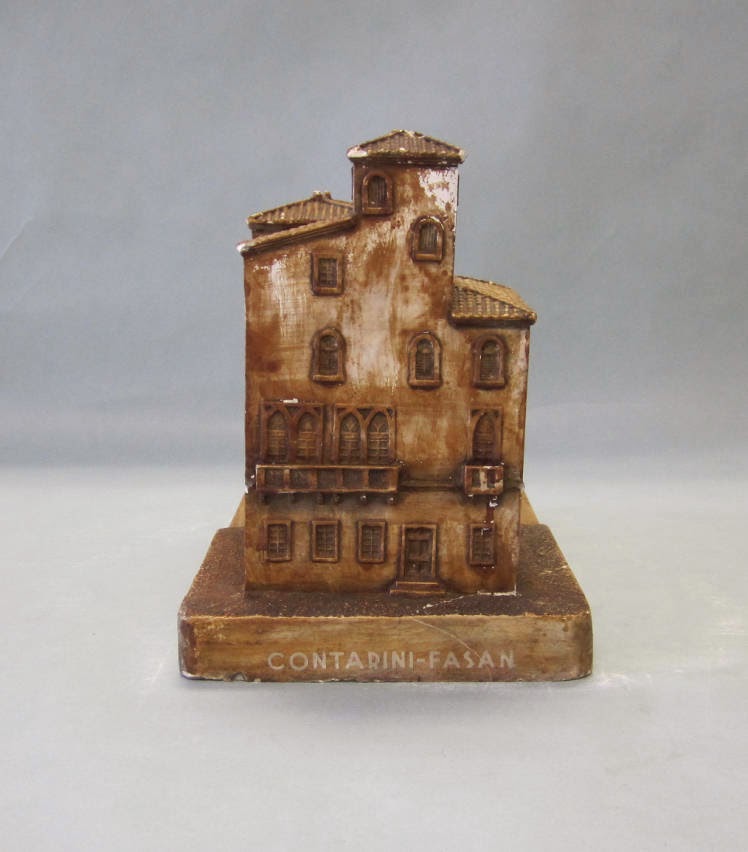 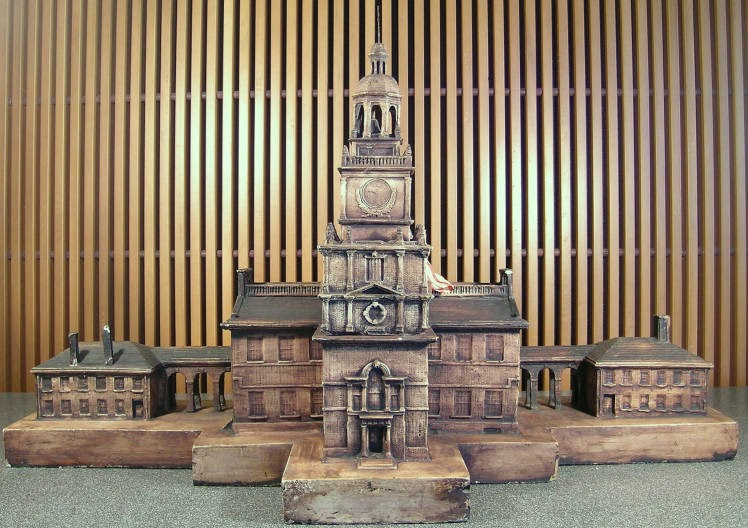 The museum is fortunate to possess this model for two reasons.  For one, the creation of the model indicates the recognition of the importance of Glessner house in the history of American residential architecture.  Secondly, the model serves as a record of the talented individuals who produced these items by the thousands as part of the Museum Extension Project of the Work Projects Administration in the State of Pennsylvania.
Posted by Glessner House Museum at 6:04 PM