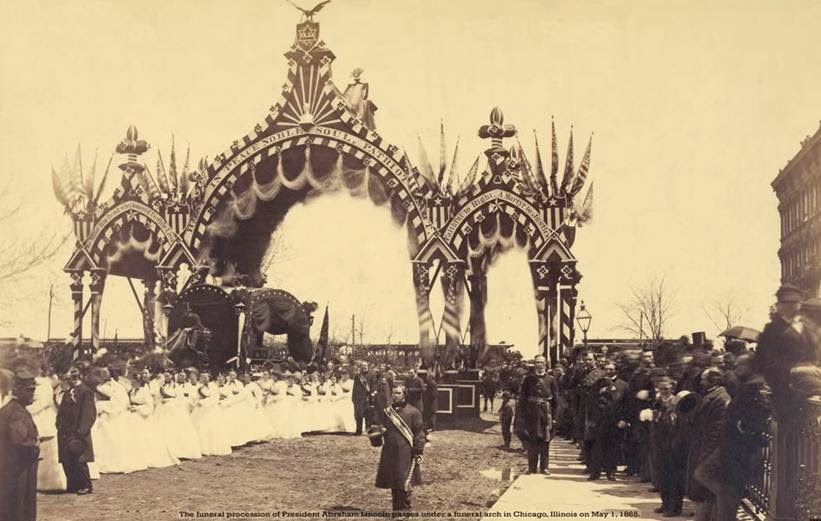 The nation was in deep mourning 150 years ago following the assassination of President Abraham Lincoln.  At 11:00am on Monday May 1, 1865 the funeral train arrived at Union Depot in Chicago.  The procession, which proceeded down Michigan Avenue to Lake Street and then on Clark Street to Court House Square, was said to rival New York’s in terms of size and grandeur.  The coffin was placed in the Court House and opened for public viewing at 6:00pm, remaining open through the night and all of the next day.  It is estimated that 7,000 people per hour filed passed the coffin.  At 8:00pm on Tuesday May 2, a hearse carried the coffin to the depot of the St. Louis and Alton Railroad and the funeral train departed for its final destination - Springfield.

One of the most popular objects on display in the house is the bronze life mask and hands of Abraham Lincoln, which occupy a place of honor on the library desk.  The following information relates how the objects were made and how John Glessner came into possession of his set. 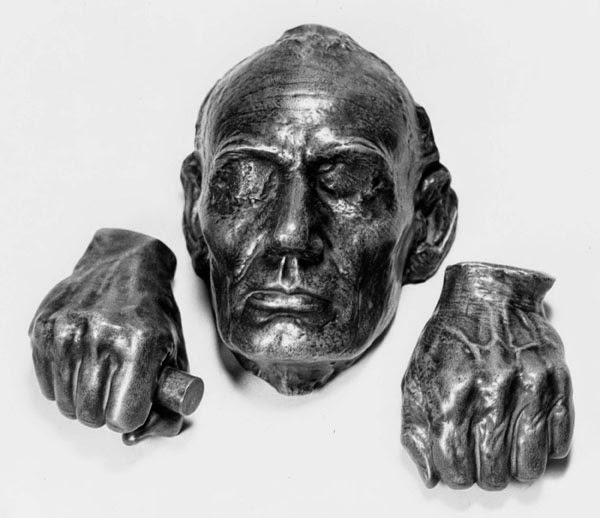 sculptor Leonard W. Volk first met in 1858 during ’s historic debates with Stephen Douglas.  During that meeting, promised to sit for the sculptor.  In April 1860, Volk saw a newspaper article announcing ’s arrival in to argue a case.  Volk went to the courthouse and reminded of his old promise.  readily agreed to begin sitting, paying a visit to Volk’s studio each morning for a week.  If he could take a mask of ’s face, Volk explained, the number of sittings could be greatly reduced.  At the session where the mask was made, sat in a chair and carefully watched every move Volk made by way of a mirror on the opposite wall.  The plaster was carefully applied without interfering with ’s eyesight or breathing through the nostrils.  After an hour, the mold was ready to be removed.  bent his head low and gradually worked it off without breaking or injury, although in the process he did pull a few hairs from his temples, causing his eyes to water.  continued to sit for Volk for five days after the mask was prepared, entertaining Volk with “some of the funniest and most laughable of stories.”

The next month, Volk was on the train to when he heard the news of ’s nomination by the Republicans.  He arrived in and rushed to ’s house, announcing to the astonished candidate, “I am the first man from , I believe, who has the honor of congratulating you on your nomination for President.”  Volk insisted that he now must execute a full-length statue of , and agreed to provide Volk with appropriate photographs of himself, while Volk would take his measurements as well as make casts of his hands.  Volk appeared at the ’s home on the next Sunday morning and set to work in the dining room.  He suggested that should be holding something in his right hand for the cast.  disappeared to the woodshed and returned whittling off the end of a piece of broom handle.  When Volk said that was not necessary, remarked cheerfully, “I thought I would like to have it nice.”  Volk noticed that the right hand was still severely swollen from the handshaking of ’s latest campaign – a difference that is visible in the casts.  Volk commented on a scar on ’s left thumb, and explained that it was a souvenir of his days as a rail-splitter.  “One day, while I was sharpening a wedge on a log, the ax glanced and nearly took my thumb off.”  After the casts were completed, Volk set off for with the molds, photographs, a black suit left over from ’s 1858 campaign, and a pair of ’s pegged boots. 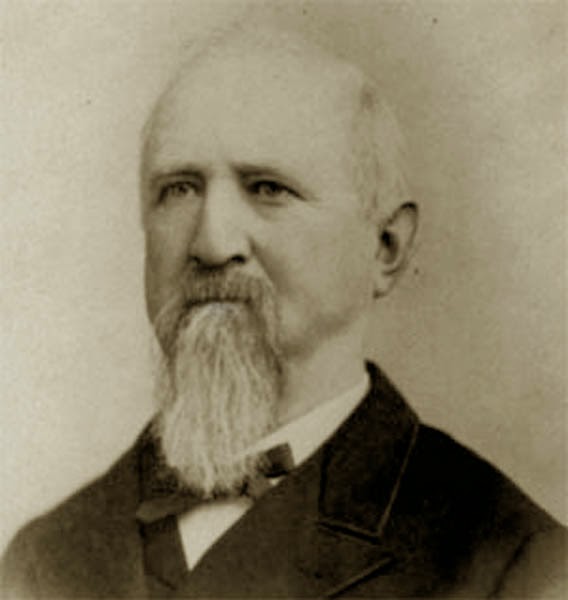 Volk never completed the statue, and later gave the casts of Lincoln’s face and hands to his son Douglas, himself an artist, who later passed them on to a fellow art student, Wyatt Eaton.  During the winter of 1885-1886, Richard Watson Gilder saw the casts in Eaton’s studio and immediately grasped their significance.

On 86, Gilder, along with his friends Augustus St. Gaudens and Thomas B. Clarke, sent out a letter to a select group of individuals which read in part:
“The undersigned have undertaken to obtain the subscription of fifty dollars each, from not less than twenty persons, for the purchase from Mr. Douglas Volk of the original casts taken by his father, the sculptor, Mr. Leonard W. Volk, from the living face and hands of Abraham Lincoln, to be presented, together with bronze replicas thereof, to the Government of the United States for preservation in the National Museum at Washington.
“The subscribers are themselves each to be furnished with replicas of the three casts, in plaster or bronze.  If in plaster, there will be no extra charge beyond the regular subscription of $50; if the complete set is desired in bronze, the subscription will be for $85 . . .
“Those wishing to take part in the subscriptions will notify at once either of the undersigned.”

Subscriptions were apparently received rapidly.  Frances Glessner recorded the following entry in her journal on :
Last week we got a bronze cast of ’s life mask and hands made by (sic) Volk – a few copies have been made to raise funds enough to give the originals to the government.”
The underside of the life mask contains the following inscription:
“THIS CAST WAS MADE FOR J. J. GLESSNER A SUBSCRIBER TO THE FUND FOR THE PURCHASE PRESENTATION TO THE UNITED STATES GOVERNMENT OF THE ORIGINAL MASK MADE IN APRIL 1860 BY LEONARD W. VOLK FROM THE LIVING FACE OF ABRAHAM LINCOLN.  THIS CAST WAS TAKEN FROM THE FIRST REPLICA OF THE ORIGINAL IN FEBRUARY 1886.  COPYRIGHT 1886 BY LEONARD W. VOLK.”
The stump end of each hand contains the following inscription:
“COPYRIGHT 1886 BY LEONARD W. VOLK.  THIS CAST OF THE OF ABRAHAM LINCOLN WAS MADE FROM THE FIRST REPLICA OF THE ORIGINAL MADE AT THE SUNDAY FOLLOWING HIS NOMINATION TO THE PRESIDENCY.”

In December 1887, when the Glessners moved into their new home on Prairie Avenue, the mask and hands were placed on display in the library, where they remain today for visitors to appreciate.

In 1888, the original plaster mask and hands, together with the first bronze casts, were presented to the National Museum (now the Smithsonian Institution) along with an elaborate illuminated manuscript which read in part:
“This case contains the first cast made in the mold taken from the living face of ABRAHAM LINCOLN by Leonard W. Volk sculptor in in the year 1860.  Also the first casts made in the molds from Lincoln’s hands likewise made by Leonard W. Volk in Springfield Illinois, on the Sunday following Lincoln’s nomination for the Presidency in May 1860.  Also the first bronze casts of the facemold, and bronze casts of the hands.  Presented to the Government of the for deposit in the by Thirty Three Subscribers.”
The list of subscribers includes the name of J. J. Glessner, as well as J. Q. A. Ward, Frances Glessner’s first cousin, a talented sculptor who created the bronze standing Shakespeare on display in the library.  Ward and St. Gaudens were close friends, and it is possible that Ward suggested that St. Gaudens include John Glessner on the mailing list, when the original subscription letter was mailed in February 1886.

BEYOND THE MASK
John Glessner was a Sustaining Member of the Lincoln Centennial Association, organized in 1909, and renamed The Abraham Lincoln Association in 1929.  His library contained over three dozen books and booklets on , which he kept on a shelf in the southeast bookcase in the library.  The books include such standards as Carl Sandburg’s two volume Abraham Lincoln: The Prairie Years, as well as more obscure titles, many of which were issued by the Association.  An interesting volume, of which only 750 copies were printed, is Abraham Lincoln in New Hampshire, which recounts ’s visit to that state in 1860.  The author, Elwin L. Page, was a friend of George and Alice Glessner, and presented the volume to her father-in-law upon its publication in 1929. John Glessner also owned a photograph of .  The cabinet card, featuring an image taken at Eaton’s Studios, carried the following inscription:  “For Mrs. Lucy G. Speed, from whose pious hand I accepted the present of an Oxford Bible twenty years ago.  , .  A. Lincoln.”  Lucy G. Speed was the mother of ’s closest friend, Joshua F. Speed, and had presented the Bible to during his visit to the Speed home in August 1841, in the hopes of relieving his depression and melancholia.  The original photograph remained in the Speed family until the 1990s, so apparently copies were made, one of which was purchased by John Glessner.  The photograph was donated to the Chicago Historical Society in April 1940 by Frances Glessner Lee.
Posted by Glessner House Museum at 9:00 AM