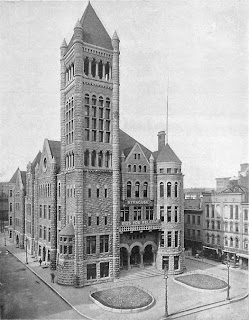 H. H. Richardson’s impact on American architecture was felt for many years following his untimely death in 1886.  Numerous architects around the country attempted to copy his style, which in time became known as Richardsonian Romanesque.  Architect Charles E. Colton designed two distinctive buildings in downtown Syracuse, New York which stand today as a testament to his ability to interpret Richardson’s style. 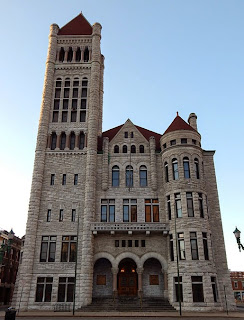 Born in 1847, Charles Erastus Colton was raised in Syracuse.  In 1873, he entered the office of architect Archimedes Russell where he remained for three years before establishing his own architectural practice.  Except for a brief period in the early 1880s when he was in partnership with James H. Kirby, he maintained his own independent practice throughout the remainder of his lifetime.  Colton was a prolific architect, designing numerous building including churches, business blocks, schools, apartment houses, and residences, most in Syracuse and the immediately surrounding area.  He served as Treasurer of the Western New York Association of Architects and in 1888 was elected a Fellow of the American Institute of Architects.  At the time of his death in 1914, he was praised as the most prominent architect in Syracuse. 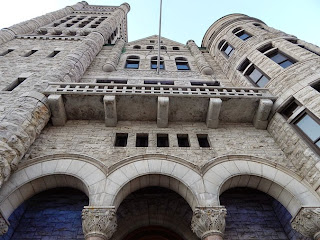 Colton is best remembered today for his design of the Syracuse City Hall, begun in 1889.  The massive fortress-like structure at 233 E. Washington Street occupies the entire block bounded by Washington, Market, Montgomery, and Water Streets. 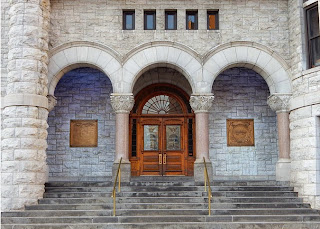 Faced in rusticated Onondaga limestone, it has been suggested that Colton was inspired by Richardson’s design for the Albany City Hall.  That building, constructed in 1880, was named one of the best ten buildings in the United States in 1885, and would have been well known to Colton.  The buildings both share many features including the arcaded entry porch and the massive corner tower.  An interesting fact is that the north end of the building (at the rear) originally fronted on the Erie Canal as seen in the image below.  After the canal was filled in, it became Water Street. 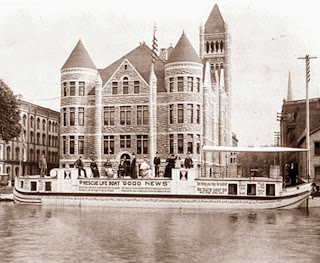 The interior of the building retains many of its original features including elaborate balustrades and encaustic tile floors, as seen in these images taken as part of the 1981 Historic American Buildings Survey documentation of the building. 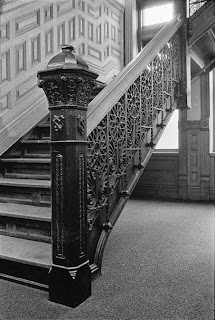 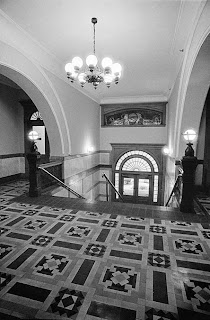 The most elaborate space was the two-story assembly room on the fourth floor above the main entrance which sat 1,200 people and featured a skylight and stained glass windows.  The pale yellow walls were decorated with a frieze of lilies.  The space was divided into two floors shortly after World War I to provide additional offices and space for mechanical equipment, but was restored to its original configuration as part of a major renovation and restoration project in 1977.  The building was listed on the National Register of Historic Places in 1976. 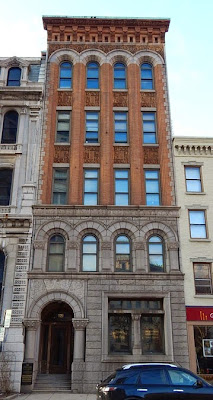 Another of Colton’s designs is located just down the street at 121 E. Water Street.  Known as the Robert Gere Bank Building, the structure was completed in 1894 at a cost of $150,000.  In the book Architecture Worth Saving in Onondaga County, the authors call it Colton’s finest work.  Constructed on a narrow lot between two existing buildings, the five-story structure employs a number of Richardsonian Romanesque details, most notably the grouping of floors three through five within tall narrow arcades, just four bays wide. 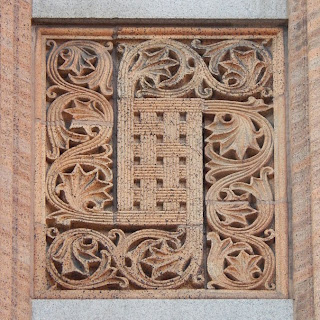 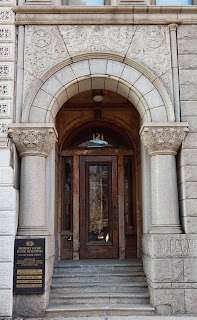 The ground floor of the building, faced in granite, features a classic Romanesque entry arch to the left, and is the only level with an asymmetrical arrangement. 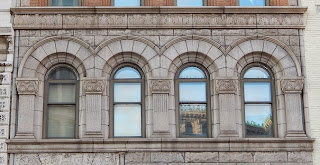 The second floor introduces the four bay rhythm which continues up through the remaining floors with slender brick piers. 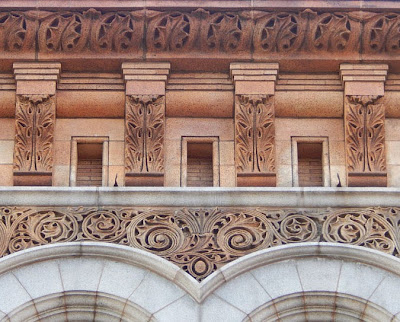 Perhaps the finest feature is the cornice at the top with a series of nine diminutive blind windows set within rich foliate decoration, reminiscent of the work of Louis Sullivan.  Overall, the beautifully executed design perfectly portrays the concept of base, shaft, and capital which Sullivan incorporated into many of his tall office buildings.

The interior features original fireproof vaults beneath the sidewalk, and one of the few remaining open cage elevators in the country set within a bronze well screen.  Listed on the National Register of Historic Places in 1972, it is also part of the Hanover Square Historic District comprising 17 architecturally significant structures in downtown Syracuse listed on the National Register in 1976.

Posted by Glessner House Museum at 12:26 AM