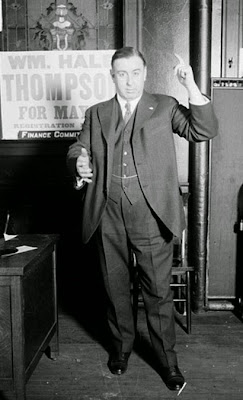 Today, Rahm Emanuel will be sworn in for his second term as Mayor of the City of Chicago.  Exactly 100 years ago, the city was celebrating the inauguration of another mayor – William Hale Thompson, known as “Big Bill” Thompson.  On April 26, 1915, John Glessner made the following notation in his wife’s journal:

“Monday, April 26 in Chicago was a great parade to mark the inauguration of Mayor William Hale Thompson.”

Thompson served three terms as the city’s mayor, from 1915 to 1923 and again from 1927 to 1931.  He was the last Republican to hold the office and, according to Mark Grossman in his 2008 book, Political Corruption in America: An Encyclopedia of Scandals, Power, and Greed, was one of the most corrupt and unethical mayors in American history.

William Hale Thompson was born in Boston in May 1869 but arrived in Chicago with his parents less than two weeks later, and it was here that he grew to adulthood.  His political career began in 1900 when he was elected alderman of the 2nd Ward.  He steadily rose up through the ranks, and considered his election as mayor merely a stepping stone to the White House.  That dream ended when he did not receive the nomination at the 1928 Republican National Convention. 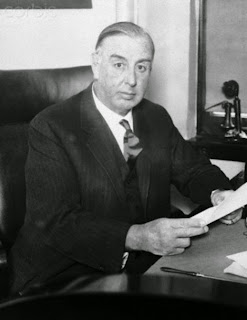 After serving eight years as mayor, he declined to run for a third term, but reentered the race four years later, staging a now famous debate between himself and two rats representing his opponents.  He pledged to clean up corruption, but in reality worked hard to undermine the reformers, and relied on Al Capone’s support for his successful reelection to a third term in 1927.  By 1931, dissatisfaction with his leadership and his ties to organized crime led to his defeat by Democrat Anton Cermak.

In spite of this less than exemplary record, at the time of his inauguration in 1915, the city was hopeful that Thompson would usher in an era of prosperity.  A grand parade, known as the Prosperity Parade, was planned for April 26, 1915 as one of numerous activities to mark the occasion.  Parade participants began gathering in Grant Park at 11:00am that morning and were all in place by the time the Mayor-Elect and his party made the rounds through the park at 1:30pm.  Then followed a “municipal salute of aerial bombs and daylight fireworks” in the park with 35 bombs symbolizing the 35 wards in the city.  The parade began at 2:00pm and proceeded west on Monroe, north on State, west on Randolph, south on LaSalle, east on Jackson and then south on Michigan. 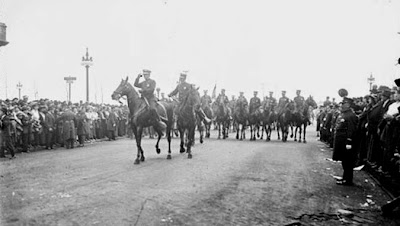 Mounted police at head of parade

Nearly 16,000 persons participated in the parade, heralded as the largest parade ever to take place in Chicago.  The parade stretched for 11 miles, took three hours to pass the reviewing stand in front of the LaSalle street entrance to City Hall, and was viewed by nearly 250,000 people along the parade route.  It included 1,711 automobiles, 662 automobile floats, and 323 horse and wagon floats.  The cost, estimated at $46,785, was offset by the projected $250,000 of revenue spent by the 50,000 out-of-town visitors who came to witness the spectacle.

Hundreds of businesses and organizations participated in the parade with floats, decorated automobiles, and other assemblages.  The Tribune noted a few of the more interesting displays:

“One unique group of floats has been provided by the Chinese merchants of the city.  The men and women on these will be clad in the richest oriental costumes to be found in America – costumes so valuable that a special guard of six policemen has been detailed to guard the floats.” 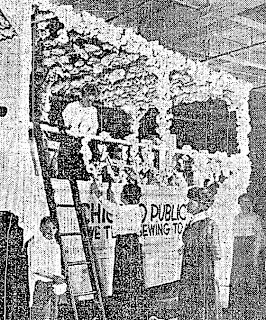 Chicago Public School "sewing float"
being readied for the parade

“The public school system was represented in a series of elaborate floats.  One carried girls dressed in white, working at sewing machines, and conveyed the information that Chicago schools teach sewing to 42,407 girls.  Another float bore young men and women working at typewriters and keeping books.  It represented the commercial courses of the schools.  Another carried a complete printing establishment with printers at work, and two others represented manual training and iron working in the schools.  Pupils of the Mozart school were uniformed and performed Red Cross evolutions in front of the mayor’s stand.”

The Electric Vehicle Manufacturers’ Association placed an advertisement in the Chicago papers encouraging owners of electric passenger vehicles to participate in their section.  The advertisement noted that:

“It is especially desired that there be a great showing of electrics, particularly those driven by women.  Therefore, to induce as many owners as possible to come into the parade, the undersigned will give to the Infant Welfare Society, one of Chicago’s most worthy charities, 50 cents for each electric passenger vehicle in the parade. . . It is hoped to raise at least $1,000.00 in this way.” 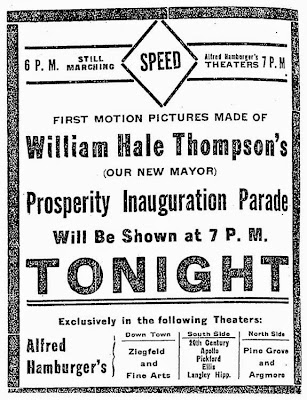 Following the parade, Thompson was sworn in at ceremonies held in the Council Chamber at City Hall.  At 7:00pm, motion pictures of the parade were shown at nine theaters operated by Alfred Hamburger around the city, including the Ziegfeld and Fine Arts Theaters in downtown.  A 30-minute display of fireworks took place in Grant Park at 8:30pm after which a series of inaugural and “prosperity” balls were held at various downtown hotels.  At 12:01am, the Mayor and his aldermanic party left for Springfield, bringing the long and memorable day of festivities to a close.