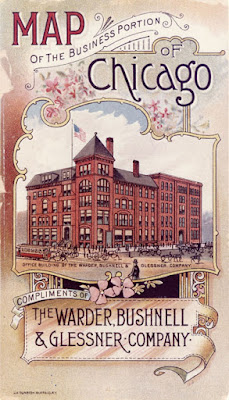 Glessner House Museum is one of two buildings in Chicago that carry the Glessner name.  The other is a lesser known, five-story brick loft building at 130 S. Jefferson Street in the West Loop known as The Glessner Center.  In this article, we will explore the history of that building and how it came to be known by that name.

John Glessner arrived in Chicago in December 1870 with his new bride, in order to take over management of the sales office for his farm machinery firm, Warder, Bushnell & Glessner.  Business thrived under his capable leadership, and by the early 1880s, the firm sought to build a larger headquarters to house their offices, showrooms, and warehouse.

In August 1882, the firm purchased a lot at the northwest corner of Adams and Jefferson, measuring 80 by 200 feet, for $31,000.  Glessner engaged the firm of Jaffray & Scott to design the five-story building.  The newly formed partnership consisted of architect Henry S. Jaffray (best remembered today for his design of the George M. Pullman mansion at 1729 S. Prairie Avenue), and designer Isaac Scott, a close friend of the Glessner family, who had completed numerous projects for them including furniture and interiors for their home on West Washington Street.

All was proceeding according to plan until April 10, 1883 when a wooden pier collapsed in the north half of the building, causing the whole interior to crash into the basement level and taking much of the north wall with it.  Later that evening, during a heavy windstorm, the east wall, which had been compromised by the earlier collapse, also fell in.  Jaffray and Scott were dismissed from the project, and architect W. W. Boyington was called in to complete the building.

The new headquarters was ready for occupancy by October of that year.  Known as the “Champion Building” after the trademarked name of the machines produced by the firm, its efficient and attractive design was praised in newspapers and other publications.  The building consisted of two main parts.  The south half of the building facing Adams contained offices and the showrooms, with huge windows facing south to bathe the spaces in natural light.  The north half of the building was utilized as a warehouse, and was bisected by a tall driveway that ran east to west through the building, allowing up to eight delivery wagons to be loaded and unloaded simultaneously while protected from the elements. 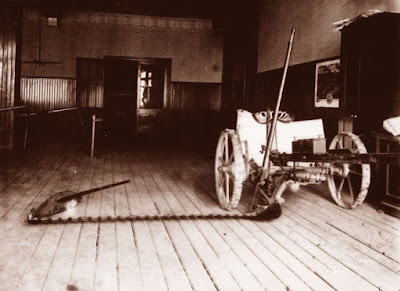 The functions of the building were clearly demarcated on the exterior – the offices and showrooms were set beneath a hipped roof with dormers and a tower, whereas the warehouse was a more utilitarian structure with a simple brick cornice.  A delicate band of terra cotta ran across the top of the large showroom windows and depicted oak leaves and acorns, an image that would be welcoming to farmers visiting to purchase equipment.  Four different designs of oak leaves and three different designs of acorns were used to create a meandering, naturalistic pattern. 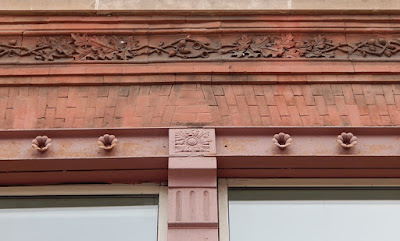 The Chicago Tribune, in an October 27, 1883 article entitled “A Champion Enterprise,” praised the building and stated, in part:

“The building, covering an area of 80x200 feet, built of the best pressed brick, terra cotta trimmings, etc. is of elegant architectural proportions, and forms at once an ornament and landmark.  Designed and built expressly for a reaper warehouse with great care in every arrangement, it is today the best-lighted and most perfect building of its kind in America.” 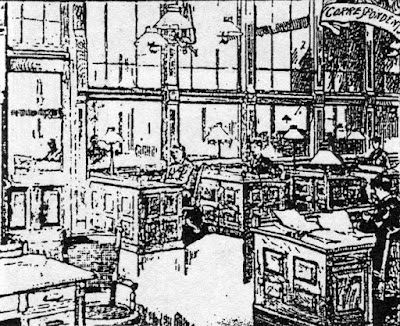 Another article, published simultaneously in The Inland Architect and Builder, gave a detailed description of the interior:

“What are conceded to be the finest appointed mercantile offices west of New York are those just completed in the Champion Reaper Company’s building built by architects Jaffray & Scott.  These offices occupy two floors in the front part of the warehouse proper.  The total space occupied is about 60 x 80 feet.  A space of 20 feet square is occupied by an immense vault and the stairway leading to the upper tier of offices.  This stairway is open, and like the general woodwork, is of red-oak.  The main office is 40 x 60, and divided from this and also from each other by partitions composed almost entirely of plate-glass, are four offices about occupying an equally divided space, 18 x 60.  The ceilings are frescoed in colors harmonizing with a heavy, solid, polished red-oak cornice and stained glass in quiet shades, give a softening effect.  The smaller offices are elegantly fitted with grates and mantels, Turkish rugs are on the polished red-oak floors, and above the mantels bronze panels add effectiveness to the general interior, in which one is apt to forget that this is an office devoted to the demands of trade, and not a costly private apartment. . . As a whole, this office in its arrangement and light-colored decoration, with the view of securing perfect light, is a model in office construction, and reflects general credit upon architect and owner.” 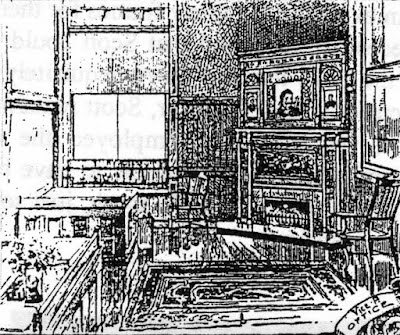 After Glessner’s firm merged with others to form International Harvester in 1902, the building was utilized by the new corporation, but was sold in 1907.  Through the years, it was occupied and owned by various companies and was known by its address – 600 W. Adams Street.  For many years, it was owned by Polk Brothers, which used it as a furniture and appliance warehouse-outlet store. 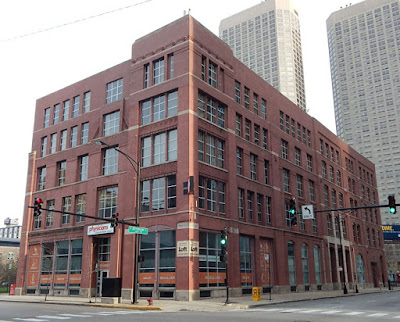 In 1984, as the surrounding neighborhood was rapidly changing, it was purchased by a developer and completely gutted and rehabbed into a luxury loft office building, containing 60,000 square feet of office space.  The architects were Booth/Hansen and Associates, with Paul Hansen serving as project architect.

It was renamed The Glessner Center and the main entrance was shifted around the corner to 130 S. Jefferson Street.  Many of the exterior features were altered, including the roofline and corner tower, but the basic structure remains as it did when first built.  And one original interior feature was left in place – the massive door to the vault, which still bears the inscription “The Warder, Bushnell and Glessner Company – Champion Binders & Mowers.”
Posted by Glessner House Museum at 6:18 PM