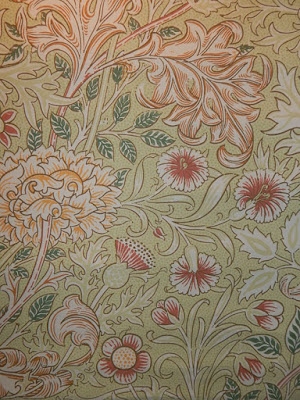 When the Glessners’ corner guestroom was opened to the public in April 2014 after a four year restoration project, one important element was missing – the Morris & Co. “Double Bough” wallpaper.  Thanks to the generosity of numerous donors, we raised the necessary funds to replicate the wallpaper which was installed in late June, allowing us to reopen the room earlier this month.

The fundraising campaign was led by a generous $10,000 grant from the National Society Daughters of the American Revolution (NSDAR), which was sponsored by the Chicago Chapter, the first local DAR chapter organized in the United States.  Frances Glessner was a charter member of the Chicago Chapter when it was formed in 1891, and the chapter has funded several recent projects at the museum, including the installation of the exhibit on The Rocks, and the restoration of the Glessners’ Kutani bowl. 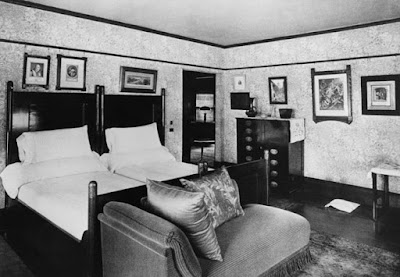 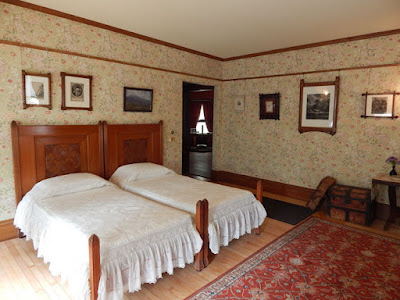 The Glessners first installed Double Bough in the guestroom in 1892 after the room had been wired for electricity.  When the room was re-wallpapered in 1916, they chose Double Bough once again.  In November 2010, during early work in the restoration project, Robert Furhoff, an expert in historic interiors and finishes, uncovered a section of the original wallpaper which was carefully peeled off the wall and conserved.  The fragment was important as it established the color way selected by the Glessners.  Morris & Co. produced the wallpaper in several different color ways, and of course, the only surviving historic images of the room were in black and white. 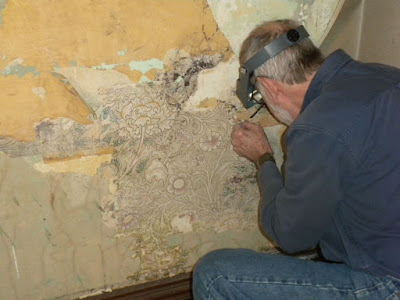 The Morris & Co. archive in England was consulted, and a small sample was found in one of the company log books that matched the sample from the Glessner bedroom.  The museum was also informed that all 22 original hand-carved fruitwood blocks used to print the original paper were in the archive, and could be used again to reprint the wallpaper using exactly the same process as undertaken more than 120 years ago.

Sample from the Morris & Co. archives

In order to produce the wallpaper in this manner, the process is extremely time consuming as each of the 22 blocks is applied individually and then the paper needs to dry sufficiently before the next block can be applied.  As such, only one roll of wallpaper can be produced per week.

The order was placed in May 2014 with Zoffany, the parent company of Sanderson, which owns the Morris & Co. archives.  Several weeks later, the first strike-off was received for approval.  Robert Furhoff was again brought in for consultation, and several corrections were made to the colors used in various parts of the design.  The corrections were returned to England and a second strike-off was received, which was approved.  Production began and the 25 rolls of wallpaper were shipped to the museum in December.

Due to the way in which the wallpaper is produced, the installation is a complex process, as absolutely no water or paste can ever touch the surface of the paper, or the ink can be damaged.  The museum was fortunate to secure the services of Jim Yates of Historic Wallpaper Specialties, who has a national reputation for the installation of 19th century wallpapers.  One of his most prominent projects was the wallpaper in the Lincoln Bedroom at the White House. 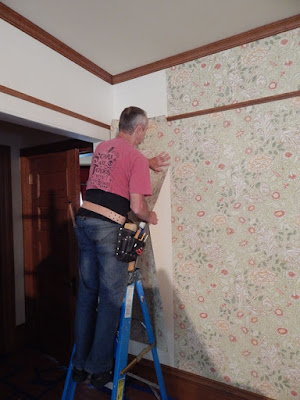 In late June, Yates and his team arrived at the museum from Tennessee, and spent the next six days completing the project.  Their work began with the installation of muslin on the walls, so that in the event any cracking of the plaster occurs, it will transfer to the muslin itself, and not damage the wallpaper.  Once the muslin was installed, it was covered with an acid-free liner to provide the optimum base to which the wallpaper would be applied. 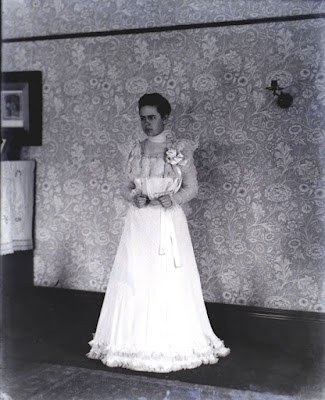 This photo was taken of Fanny Glessner on the day of her formal debut – November 24, 1897.  The photo was studied to ensure that the pattern (a 31” repeat) was placed on the walls exactly as it had been originally – both top to bottom, and side to side.

As the wallpaper was placed on the walls, the room took on an entirely different feel, as the space was suddenly filled with the intricate floral design that is among the most complex ever produced by Morris & Co.   Within a few days, the furnishings were brought back into the room, including the Morris & Co.  “Rose and Thistle” reproduction draperies, Morris inspired area rug, furniture designed by A. H. Davenport & Company, and engravings displayed in custom-made frames by Isaac Scott. 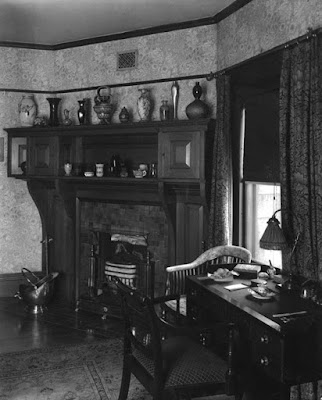 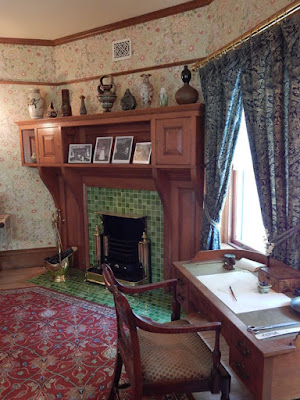 The room was reopened to the public for tours on Wednesday July 1, 2015.  With the completion of this room, Glessner House Museum now features one of the largest public collections of Morris & Co. reproduction wallpapers, textiles, and rugs in the country, accurately recreating the Arts and Crafts inspired interior created by John and Frances Glessner more than a century ago.
Posted by Glessner House Museum at 3:51 PM