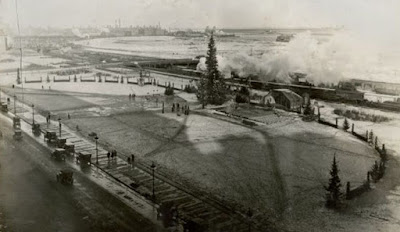 Last week, we examined the history of Chicago’s first municipal Christmas tree in 1913.  This week, we look at the tree erected in 1915 – the only one specifically mentioned in the Glessner journal.

In late December 1915, John Glessner made the following entry:
“The municipal Christmas tree continues beautiful.  It bears no lights but is adorned with glass jewels that are said to have been on the jewel tower at the San Francisco fair, and is lighted by search lights of various colors, across the street and elsewhere.  Hundreds of people stand about on Michigan Avenue in the evenings to see it.”

THE TOWER OF JEWELS
The Panama-Pacific International Exposition was held in San Francisco from February 20 through December 4, 1915.  Organized to commemorate the completion of the Panama Canal, San Francisco was anxious to host the world’s fair to show how it had recovered from the devastating earthquake of 1906. 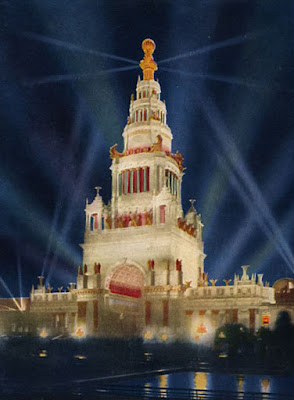 The most impressive structure on the fairgrounds was the Tower of Jewels which, at 435 feet, towered over the other buildings at the fair, and could be seen for miles.  The name of the tower came from the 102,000 faceted cut glass “jewels” that adorned the surface of the building.  The jewels, known as “Novagems” were created by Walter Ryan and made in Bohemia in a variety of colors and sizes ranging from ¾” to 2” in diameter.  Each individual jewel was mounted to the building with a small brass hanger that included a small mirror behind to enhance the intensity of the light as it passed through the jewel.  The jewels hung free on their hangers and would move in the breeze creating spectacular effects as they reflected the sunlight.  In the evening, 54 searchlights were directed toward the tower, creating a similar impression.

In his 1921 history of the exposition, Frank Morton Todd noted an occasional event known as “Burning the Tower”:
“Concealed ruby lights, and pans of red fire behind the colonnades on the different galleries, seemed to turn the whole gigantic structure into a pyramid of incandescent metal, glowing toward white heat and about to melt.  From the great vaulted base to the top of the sphere, it had the unstable effulgence of a charge in a furnace, and yet it did not melt, however much you expected it to, but stood and burned like some sentient thing doomed to eternal torment.” 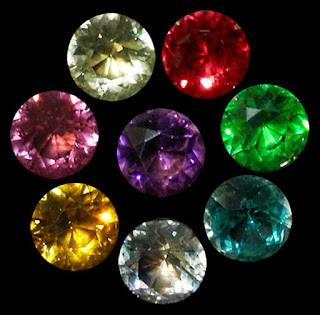 Novagems were produced in eight colors

Jewels were sold as souvenirs during the fair and were also made into pins, cufflinks, and spoons.   At the close of the fair the actual jewels from the tower were sold for $1 each.

THE JEWELS COME TO CHICAGO
Walter Ryan brought 4,000 of the jewels to Chicago for use on the municipal Christmas tree, sponsored by the Chicago Examiner newspaper.  They were suspended from the boughs of the tree and clustered to form the huge Star of Bethlehem at the top.  Smaller jewel-encrusted stars were placed on the 30-foot trees which surrounded the base of the main Christmas tree. 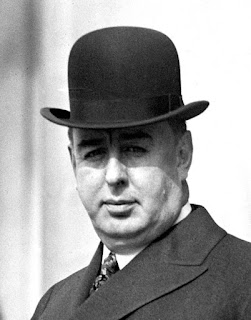 Located in Grant Park at Congress Street, the tree was lit at 4:45pm on Christmas Eve. Mayor William Hale Thompson pressed the electric button which turned on the hundred searchlights directed toward the 90-foot fir tree.   Two huge searchlights each were mounted to the Auditorium and Congress hotels, while dozens of smaller lights in various colors were set about the park.

Forty lights set beneath the tree lit the entire height with colors changing from red to green to blue to purple and back to red again.  As John Glessner noted, there were no lights on the tree itself, but it was constantly changing color with the searchlights.

THE TREE LIGHTING CEREMONY
The festivities began with the mayor’s procession leaving City Hall and heading east on Randolph Street and then south on Michigan Avenue to Congress Street.  Leading the procession was the First regiment of cavalry and eight trumpeters from the Illinois National Guard.  Two companies of militia from the First and Seventh regiments formed a lane from Congress Street to the platform and saluted the mayor and his party as they passed.

Following the mayor’s remarks and lighting of the tree, the huge crowd was treated to a musical program provided by various groups including the Chicago Band Association, the Apollo Musical Club, the Haydn Choral Society, the Chicago Grand Opera Company, and the Paulist Choir, the latter singing from the balcony of the Auditorium Hotel while being illuminated by twenty searchlights.

The tree remained in place until New Year’s Day.  It must have been a magnificent sight to see the richly colored jewels swaying and sparkling in the light.  And one cannot help but wonder what became of the 4,000 jewels when the tree was finally dismantled.  Perhaps they were picked up or sold as souvenirs and some may still survive to this day, buried in the bottom of a drawer or maybe even hung on a Christmas tree in someone’s home.
Posted by Glessner House Museum at 5:02 PM