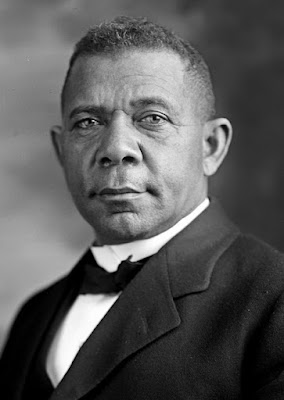 In honor of Black History Month, we take a moment to reflect back on the life of the great educator, author, and orator Booker T. Washington and his two visits to the Prairie Avenue neighborhood in the early 20th century.  Born into slavery in Virginia in 1856, Washington went on to become the acknowledged leader of the African-American community for a quarter century, until his death in 1915.

In 1881, the 25-year-old Washington was asked to become principal of the newly formed Tuskegee Institute in Alabama.  Originally called the Tuskegee Normal School for Colored Teachers, the school was organized as part of the movement to expand opportunities for higher education in formerly Confederate states.  Within a year, Washington purchased a 100-acre former plantation as the site for the school, and directed the students to construct the first buildings as part of a work-study program.  Washington was a firm believer in the value of higher education as the best road for African-Americans to improve their condition, and he remained at the school for 34 years.  Among the donors he attracted to the school were Andrew Carnegie and John D. Rockefeller.

Washington achieved national prominence for a speech he presented at the Cotton States and International Exposition on September 18, 1895 in Atlanta, Georgia.  Known as the Atlanta Address, it laid out the foundation for what became known as the Atlanta Compromise, an agreement between African-American leaders and Southern white leaders.  In exchange for the rights of a basic education and due process of law, African-Americans would submit to white political rule. 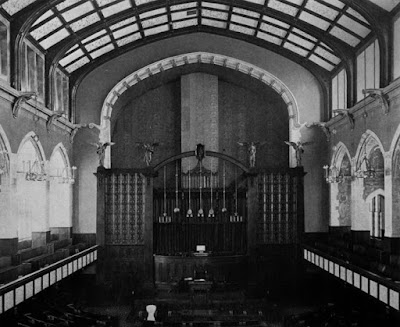 In late December 1901, just six weeks after dedicating their newly rebuilt sanctuary, the congregation of Second Presbyterian Church, 1936 S. Michigan Avenue, invited Booker T. Washington to speak on the importance of education in the African-American community.  The Chicago Tribune gave a detailed account of the speech on December 30, 1901:

Hundreds of people surged around the Second Presbyterian Church, Michigan avenue and Twentieth street, last night, eager to hear the address by Booker T. Washington.  For nearly an hour before the doors opened the sidewalks were packed and when the doors swung open a crush began.

Men and women, white and black, pushed and pulled in an effort to pass through the broad doors at the same time.  Only the diligence of the ushers prevented serious injury to the struggling ones.

“It’s always so in Chicago,” complained one gray-haired man.  “If there’s any one worth hearing you can’t get to him.”

By 7 o’clock there was not one of the 1,500 seats in the church unoccupied.  Then the people began to crowd forward into the aisles until they extended half way down to the pulpit.  In the gallery every inch of available space was filled, while on the stairways leading thereto hundreds of persons stood for an hour waiting for the lecture to begin and then stood another hour listening to the address of the colored orator.  After the address ushers of the church estimated the number turned away at 500.

“’It was an immense crowd,” said Mr. Washington, “and I am sorry there were so many who would not hear me.”

The address of Mr. Washington was a plea for the education of the negro.  He told of the conditions that prevailed in the South at the conclusion of the war, when the black man went out to make his way in the world with no other capital but a pair of strong arms and a brave heart.

Then he related incidents attending the founding of the educational institution over which he presides in Tuskegee, Ala.  The struggles of himself and the first students who came to his school were recounted.  The school grew, however, and as graduate after graduate went out the work became easier.  The graduates spread the fame of the school, and soon it became known over the world.

“A few months ago,” said Mr. Washington, “I sent out 300 letters to prominent men in the South requesting their opinion on the education of the colored man, whether or not it had proven beneficial to him, and if his condition had improved.  With three exceptions every man said education was doing more for the colored man than anything else.  One of the dissenting three said the negro was not so well off as when he was a slave.  The other two were non-committal.

“We have learned that it is a great thing to teach a man to do some one thing better than anybody else can do it, and so we have sought to make our students skillful artisans.  Wherever we have sent our graduates we have received good reports of them.  We teach them to the good citizens and Christian gentlemen.  No higher aim can be attained by any individual than that.”

Mr. Washington spoke with some pride of the growth of the wealth of his race.  In Virginia he said they own one twenty-sixth of the land and in Georgia, according to the latest tax returns, they possess $14,000,000 worth of property. 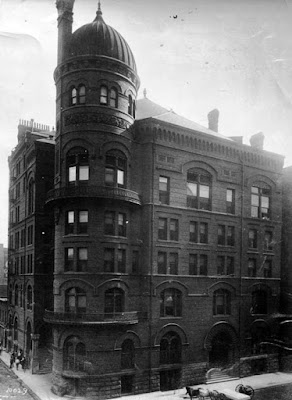 Washington returned for a second speaking engagement in Chicago in the spring of 1908.  He was entertained at a luncheon at the Union League Club on April 4, 1908, hosted by Charles L. Hutchinson, long-time president of the Art Institute of Chicago.  The other guests at the luncheon were John J. Glessner, Franklin MacVeagh (who would be appointed Secretary of the Treasury the next year), J. B. Forgan, Chauncey Keep, J. C. Grant, Clarence Buckingham, A. C. Bartlett, Dr. L. D. Case, B. H. Carpenter, and Dr. Park.  That evening Washington spoke to a large audience at the First Congregational Church of Oak Park.

The next day, Washington spoke in the morning at the Abraham Lincoln Center, a settlement house at 700 E. Oakwood Boulevard; in the afternoon at the Kenwood Evangelical Church, and in the evening once again at Second Presbyterian Church. 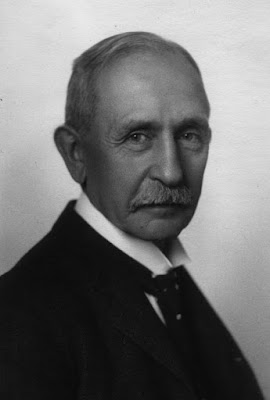 John Glessner recalled meeting Booker T. Washington in a paper he wrote in 1917 for presentation to the Chicago Literary Club.  For reasons that remain unclear, the paper was never read, although Glessner continued reworking it for a decade.  Regarding Washington, Glessner noted:

As for Booker T. Washington, I met him, as many of us have and as all of us might have.  He was an able man, and a good man, deeply interested about his people, and devoted to their advancement.

Dr. Washington’s hope for the development of the race seems ideal to me – to make good, self-respecting laborers first, then good mechanics, and so up to higher levels.  A good workman, a peaceable, orderly man will be respected everywhere. . . The self-respecting man, whatever his color, not too aggressive, who does well and honestly what he does, will deserve and receive respect.  The modern man of color, I am convinced, is to be a great factor in the industrial history of this country.

Glessner wrote the lengthy paper primarily as a personal reminiscence of the many African-Americans he had known through the years, beginning with his childhood in Zanesville, Ohio.  The document shows that he held rather progressive views for his day.  In closing his remarks, he sensitively thought back on the individuals he had known most intimately, whom he recalled with deep affection:

As for the particular friends of whom I have made a meager record here, they have descended into the lonesome valley – and I still hold them in kind remembrance. . . if there wasn’t a high place reserved for them in Paradise, few of us need cherish great expectations of getting there.