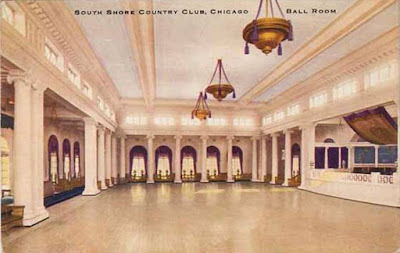 On January 24, 1916, an entry in Frances Glessner’s journal noted that she went to see the new South Shore Country Club building.  New indeed – the rebuilt Country Club had been formally opened amidst great celebration just four days earlier.  Designed by the architectural firm of Marshall and Fox, the elegant Mediterranean Revival style structure continued to house the Country Club until 1974, when the property was sold to the Chicago Park District and converted into its present use as the South Shore Cultural Center.

ORIGINS
The Club itself dated to 1905, when Lawrence Heyworth first conceived the idea of a country club in conjunction with the Chicago Athletic Association, of which he was president.  As Heyworth recalled many years later, he desired a country club so that CAA members “could enjoy dining and wining in a beautiful place out in the country instead of having to resort to dives and saloons, which at that time were about the only available suburban places.”

Heyworth assembled a group of directors including Harold F. McCormick, Joseph Leiter, Charles A. Stevens, and Harry I. Miller, and purchased 65 acres of land along Lake Michigan, between 67th and 71st Streets.  After formally incorporating the club in April 1906, hey hired the firm of Marshall and Fox to design the building and oversee its construction in quick order “as we could not collect the club dues until we had the grounds and the building finished.”  (The partnership of Marshall and Fox, consisting of Benjamin H. Marshall and Charles E. Fox, was formed in 1905.  This was an important early commission for the firm, which would go on to design projects for a number of club members).  For inspiration, the architects were giving a photograph of an old Mexican club in Mexico City that Lawrence Heyworth liked.   (Newspaper accounts later compared the architectural style to George Washington’s Mt. Vernon, reinforcing the fact that journalists are by no means architectural historians). 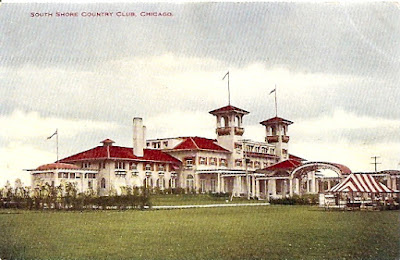 The first club house opened on September 29, 1906 with over 600 guests present to christen the building with 92 cases of champagne, valued at $3,000.  That fact led to the headline in the Chicago Tribune the next day which read “New Club Toast Defies Farwell,” acknowledging the protest of Arthur Burrage Farwell and the Hyde Park Protective Association, which was attempting to prevent the serving of liquor in the club, located within a dry district.  The attorneys for the club, used an argument reminiscent of George Wellington “Cap” Streeter, who claimed for himself the land comprising present day Streeterville on the grounds the land wasn’t part of the original plat of the city.  The directors of the club, using similar logic, noted that the land upon which the club stood was “made land” and at the time the boundaries of Hyde Park were drawn, the club land “was under the waters of the lake.”

LAWRENCE HEYWORTH
Heyworth was the son of a successful real estate developer who arrived in Chicago from England in the 1860s.  Growing up amongst the Prairie Avenue crowd, he graduated from Yale with a degree in engineering in 1890.  He obtained a position with the contractor George A. Fuller, who oversaw construction of numerous skyscrapers in the city, including the Monadnock and Rookery buildings.  In 1897, Heyworth wed the daughter of Otto Young, a millionaire wholesale jeweler and real estate investor with an impressive mansion on Calumet Avenue and the largest summer “cottage” at Lake Geneva, Wisconsin. 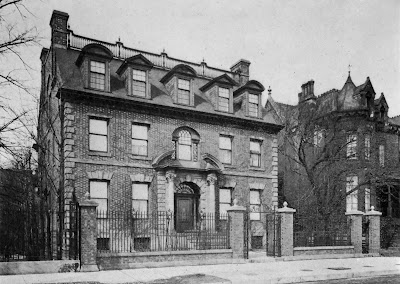 In late 1901, the Heyworths purchased the Howard Van Doren Shaw designed house at 1900 S. Calumet Avenue, just two blocks north of Otto Young’s mansion.  With two young children, the couple appeared to have everything needed for a happy life.  In 1904, Heyworth supervised the construction of a skyscraper at 29 E. Madison Street for his father-in-law, Otto Young.  Designed by Frederick P. Dinkelberg for D. H. Burnham & Co., the classic Chicago School designed building, with lavish tapestry-like ornament, was named the Heyworth Building.  It was designated a Chicago landmark in 2000, the Heyworth name still prominently displayed over the main entrance.

In June 1906, Cecile Young Heyworth sued for divorce from her husband, noting numerous indiscretions that had been documented over the course of a year by a private investigator she had hired.  The couple had not lived together since shortly after the birth of their daughter, Lawrence Heyworth continuing to occupy the Calumet Avenue home.  The divorce was granted on June 9, 1906, just as plans were being finalized for the South Shore Country Club to open.  (Note: The Heyworth’s son Lawrence Jr. achieved notoriety in 1944 when, during his World War II service as a Navy officer, he helped rescue aviator and future president George Bush from the Pacific Ocean).

Heyworth remarried in 1914, and he and his new wife Marguerite moved into a luxurious home in the South Shore neighborhood, not far from his beloved Club.

CLUB EXPANSION
The club thrived and in less than ten years, it became apparent that a much larger club house would be needed to accommodate the growing membership.   The original clubhouse was moved 700 feet to the south, except for the spacious ballroom addition designed by Marshall and Fox in 1909, which was incorporated into the new building.

The new clubhouse, also by Marshall and Fox, was four stories in height and was a greatly enlarged version of the original structure.  The H-shaped plan incorporated the ballroom wing to the south, a corresponding dining room wing to the north, and a huge connecting “passagio” in between, with a solarium projecting toward Lake Michigan. 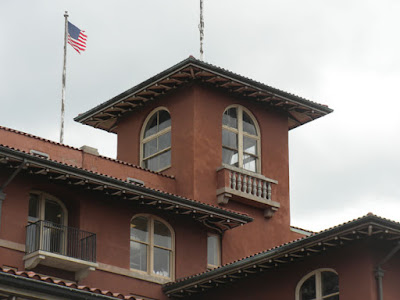 Two pairs of symmetrical towers with balconies crowned the low pitched terra cotta tile roof set atop walls clad in cement stucco with a pebble dash finish.  As an article in The Architectural Record noted, “The exterior of the building does not strive for effect through applied ornament.  It is merely a building of good proportions, eminently suitable for its purposes.” 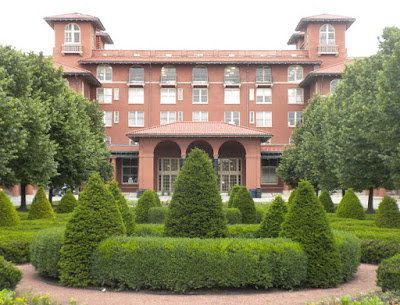 Members and their guests approached the club house through a stately gatehouse, part of the original 1906 design, and proceeded down a curved driveway lined with a pergola, or trellis covered walk.  The driveway encircled an elaborate garden designed by landscape architect Thomas Hawkes in collaboration with Marshall and Fox. 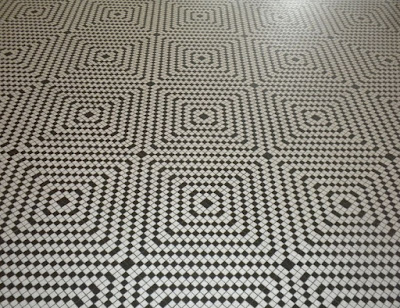 The style of the interior was entirely different, incorporating elements of the Classical Revival and Adamesque styles.  The entrance vestibule and corresponding solarium were illuminated with large skylights, reflecting light upon the white diamond patterned floors with Greek key borders. 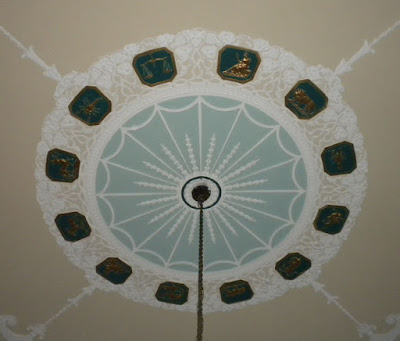 Of particular note was the ceiling of the solarium, centered with a huge plaster medallion embellished with the signs of the zodiac. 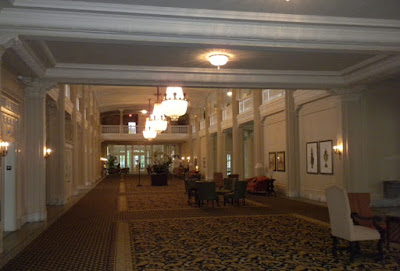 The main foyer, known as the Passagio was two stories in height and connected all the main interior spaces.  It was decorated with fine Adamesque details in blue, pink, and white and was illuminated with three huge crystal chandeliers. 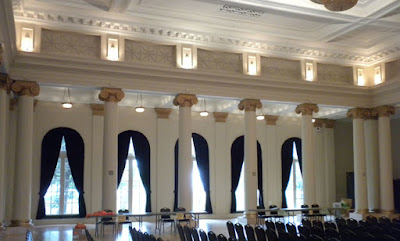 At the south end of the Passagio was the ballroom with Classical details including Ionic columns with gold capitals, clerestory windows, and dentil trim.  Colonnaded side aisles, large arched windows, and beamed ceilings gave a sense of grandeur to the space. 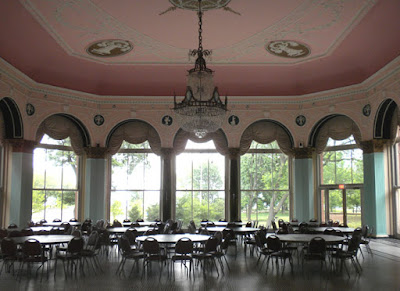 The dining room anchored the north end of the Passagio, and was surrounded by floor-to-ceiling windows on three sides, set into colonnaded walls.  A 300-foot terrace surrounded the dining room, and was used for outdoor dining.  Corinthian columns, faux painted to appear like marble, were topped with gold capitals. 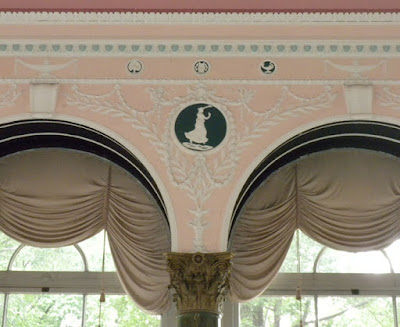 The decoration of the room was done in pink, blue, and white with delicate cameo-like inserts on the ceiling, walls, and chandeliers.

The first event in the new club house was a New Year’s Eve celebration on December 31, 1915 which drew 2,000 people for a midnight supper. 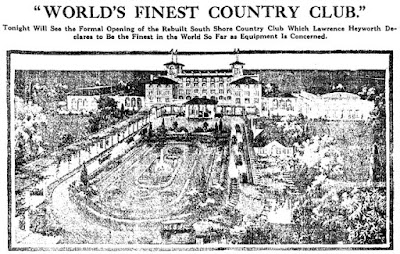 The formal opening of the clubhouse occurred three weeks later on January 20, 1916 with, once again, more than 2,000 people in attendance to inspect the elegant building which cost in excess of $400,000 to construct.  Lawrence Heyworth noted that the equipment in the new building “is conceded by those who have seen it to be, without exception, the finest in the world.”

LATER HISTORY
By the early 1960s, the racial makeup of the neighborhood had changed dramatically.  The wealthy white families who made up the membership of the club began moving from the neighborhood in large numbers.  In 1967, the club considering opening its membership to Jews (for the first time since the 1930s) and to African Americans (for the first time ever).  When that move was voted down, the fate of the club was sealed.  In 1973, the club voted to liquidate their assets and the final event, the Cotton Ball, was held in the elegant rooms on July 14, 1974.  An auction of the property of the club was held for members later that month.

The property was sold to the Chicago Park District for $9,775,000.  Although the original plans called for the demolition of all the buildings, a coalition of neighborhood activists and historic preservationists convinced the Park District not to demolish and instead convert the clubhouse into the newly christened South Shore Cultural Center.  Over the span of twenty years, the main buildings were renovated and repurposed.  Other buildings, including the original clubhouse built in 1906, were demolished.

The non-profit Advisory Council at the South Shore Cultural Center was formed in 1986 to advise the Park District on all operations of the Cultural Center, to develop and expand cultural, recreational, and education activities for adults and children, and to promote the maintenance and beautification of the park.

Today, the Center houses the South Shore Cultural Center School of the Arts which includes youth and teen programs, community art classes, the Paul Robeson Theater, a fine art gallery, two dance studios, music practice rooms, and a visual arts studio.  Banquet facilities are available for rent, and the Washburne Culinary Institute operates a teaching program in the Parrot Cage Restaurant.  The golf course continues to operate and is open to the public, as are the beach, picnic areas, gardens, and nature center.

The Center has been used in several movies including The Blues Brothers where it was used as the “Palace Hotel Ballroom.”  Future president Barack Obama and his wife Michelle held their wedding reception there on October 3, 1992. 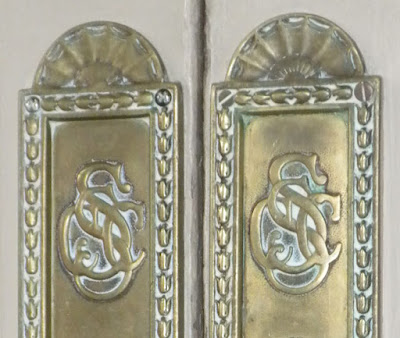 Special thanks to William Krueger, author of Chicago's South Shore Country Club (Arcadia Publishing, 2001) for his 2011 tour of the clubhouse and grounds.
Posted by Glessner House Museum at 9:44 PM