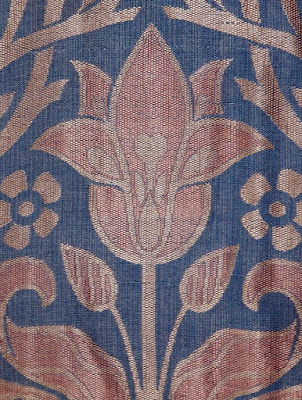 When John and Frances Glessner undertook the furnishing of their new home on Prairie Avenue in 1887, it is well documented that they incorporated numerous textiles, wallpapers, and carpets produced by Morris & Co.  In recent years, many of these items have been reproduced and can now be seen in the main hall, parlor, library, and bedrooms.  A recent reexamination of a pair of drapery panels in collections storage has resulted in the discovery of a previously unattributed Morris & Co. textile, although a bit of mystery still remains.

THE MYSTERY BEGINS
In 1995, the museum received an extraordinary bequest from Martha Lee Batchelder, the last surviving grandchild of John and Frances Glessner.  Included in the bequest were hundreds of items originally used in Glessner House including furniture, decorative arts, textiles, silver, jewelry, and archival materials.  The pair of drapery panels was included in the bequest as well, although, for reasons that remain unclear, when received into the collection, they were attributed to Candace Wheeler.

Candace Wheeler (1827-1923) was an important figure in 19th century interior design, and is generally regarded as the first significant female in that field in America.  She was a partner in Associated Artists along with Louis Comfort Tiffany, Lockwood de Forest, and Samuel Colman; commissions for that firm included the redecoration of the White House in 1882.  In addition, she founded the Society of Decorative Art in New York City and designed the interior of the Women’s Building at the World’s Columbian Exposition in Chicago in 1893.

Recently, art and architectural historian Kathy Cummings paid a visit to the museum, while doing research on Associated Artists and the early work of Louis Comfort Tiffany.  The pair of panels was pulled for her inspection, but since no marking could be found positively identifying them as the work of Wheeler, the decision was made to send images to Wheeler expert Amelia Peck, the Marica F. Vilcek Curator in the Department of American Decorative Arts at The Metropolitan Museum of Art.  Peck’s initial response was that the panels were not the work of Wheeler at all, and she quickly identified them as a Morris & Co. design called “Cross Twigs.”

ONE MYSTERY IS SOLVED 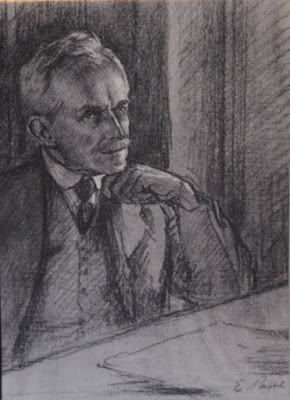 The design for Cross Twigs is the work of John Henry Dearle (1859-1932), a talented designer in the Morris & Co. firm.  Dearle was hired by Morris when he was just 19 years old, and soon became a proficient tapestry weaver.  He began producing textile, embroidery, and wallpaper designs by the late 1880s, many of which were strongly influenced by Turkish and Persian textiles he saw in the South Kensington Museum (now the Victoria and Albert Museum).  He rose to become Morris’ chief designer by 1890 and managed his Merton Abbey Works, a position he continued after the death of Morris in 1896.  After the death of Edward Burne-Jones in 1898, he became the principal stained glass designer as well.  Since Dearle’s early designs were all sold under the Morris name, it was not until the early 1900s that he became well known, serving as the artistic director for the rebranded Morris & Company Decorators, Ltd.

With no definitive documentation as to when Dearle created the design, it had long been thought that the design for Cross Twigs dated to about 1898.  In 2012, however, a research student at Bangor University in North Wales made a discovery while inventorying the papers from nearby Penrhyn Castle, a National Trust property.  The student, Catrin Wager, found invoices documenting the purchase of extensive wallpapers and textiles from Morris & Co. by Lord and Lady Penrhyn in anticipation of a visit from the Prince of Wales (later King Edward VII) in 1894.  Cross Twigs, embellished with tassels and fringe, and lined with gold silk, was used for the hangings made for the Prince’s bed.  (For an image of the bed, click here).  This research confirmed that the design was created at least five years earlier than previously thought.

BUT ONE MYSTERY REMAINS 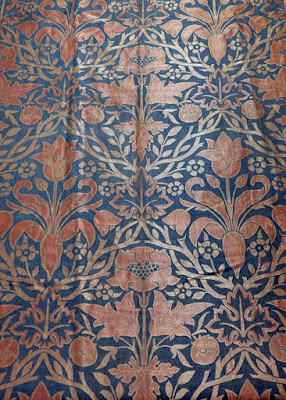 Cross Twigs is a rich hand-loom jacquard woven silk and linen fabric.  Crossed twigs sprouting simple daisy-like flowers form large diamonds into which are set two alternating patterns of tulips and poppies.  The twigs and outlines of the flowers and leaves are executed in gold, while the flowers and foliage are a rich apricot, with all set against a deep blue background. 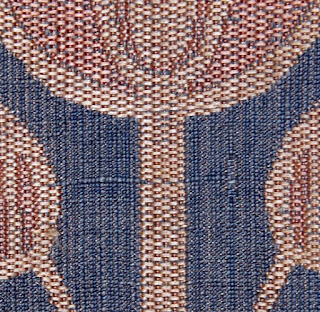 The richness of the fabric is attributable to its surface texture, the result of combining the glossy silk with the matt surface of the linen.  The weaving technique utilized raises the silk portions above the surface, creating a three-dimensional quality.

One lingering question remains – where did the Glessners use these panels?  Historic photos of their Prairie Avenue home do not show the Cross Twig panels in place.  One thought is that Cross Twigs was originally used for the draperies in daughter Fanny’s room.  The only photos of this room date to 1923, by which time the window treatment had been changed.  Another thought is that the panels may have been used in a room at The Rocks, the Glessners’ summer estate in New Hampshire.  A third possibility is that the Glessners may have had the panels made for the home at 1700 S. Prairie Avenue, which they presented to their daughter and her husband, Blewett Lee, in 1902.

It is hoped that documentation will come to light which will solve this last mystery.  But even if it is never known where the panels were used, the museum is delighted to have identified them as the design of John Henry Dearle, adding to our understanding of the Glessners and the extensive use of Morris & Co. products in their home.