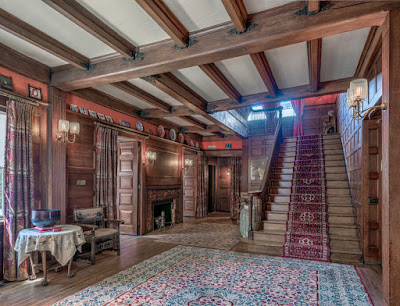 During Preservation Month 2020, we are exploring four of the main rooms at Glessner House, examining the history of the spaces, their reuse after the Glessner occupancy ended in 1936, and most importantly, an overview of the restoration work undertaken to return them to their original appearance. The focus will be on the architecture and decoration of the rooms, with less emphasis on the furnishings and decorative arts. 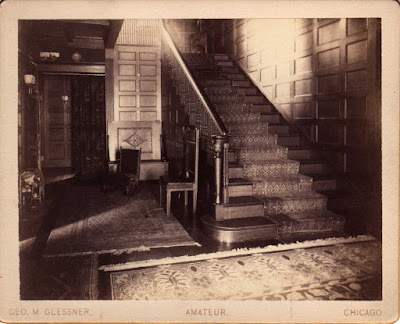 This week we look at the main hall, a critically important space within the house, as it was the first room guests would see upon their arrival. The ground level entrance of the house, unique on Prairie Avenue, resulted in guests experiencing the main hall differently than in other homes, as it slowly revealed itself as the guests ascended the interior stairs to the first floor. The warm tones of the quarter sawn red oak paneled walls, combined with the richly colored and patterned Morris & Co. rugs and textiles, immediately conveyed the “cozy” feeling Frances Glessner requested of H. H. Richardson. 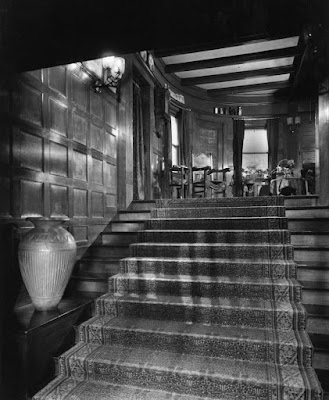 Directly ahead of the stairs, a curved wall subtly directed guests to the right, the location of the parlor and dining room. The curved wall is centered by a door which leads to a porch in the courtyard. The only leaded glass window in the house is found in that door, where a simple grid of clear chipped glass squares is backed by yellow glass. In late afternoon, the effect of the sunlight hitting the irregular facets of the chipped glass is absolutely stunning. 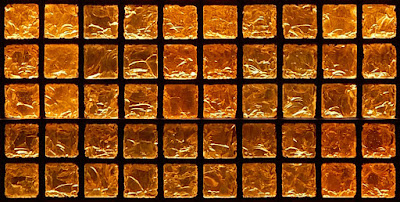 Detail of leaded glass window; there are 230 pieces of chipped glass in total

A large wood-burning fireplace is flanked by entrances into the parlor. The Glessners believed strongly in the hearth as a symbol of hospitality and that idea is well conveyed in the early sketch Richardson did of the main hall, although the shield and crossed swords above the fireplace would not have been to the Glessners’ tastes. 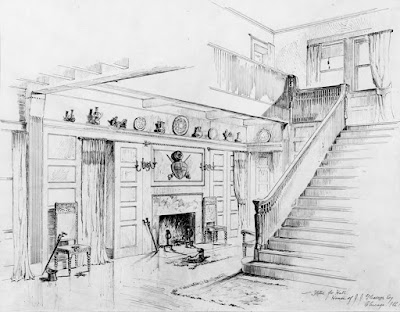 The detailing of the fireplace, which has no mantel, features Classical details found elsewhere in the house including dentil, bead, and egg-and-dart motifs. The fireplace is faced in dramatic African rose marble, a type of Breccia stone which features broken fragments naturally cemented together with a fine-grained matrix. The hearth stone is a lighter colored Bois de Orient marble. 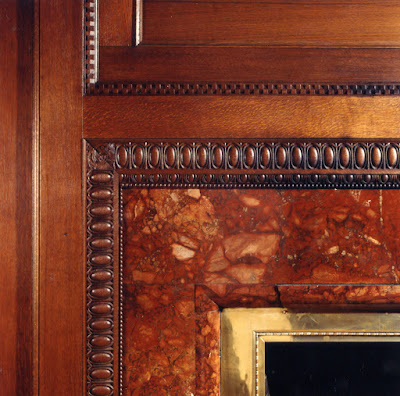 Adjacent spaces, including the schoolroom, library, master bedroom hallway, and parlor, can be closed off from the main hall with either pocket doors, regular doors, or portieres, an important consideration for a winter residence where Chicago’s cold winds could find their way into the hall. Above the front door, a cork alcove (accessed from the library) provided cork walls where the Glessners tacked up prints and drawings. The idea was based on Richardson’s own bedroom, which also had cork walls, so that he could tack up his architectural drawings and view them when confined to bed during frequent illnesses. Other secondary spaces off the hall include a guest bathroom and a small closet under the main stairs, which measures just four feet in height, and was most likely used to store tools and wood for the hall and parlor fireplaces. 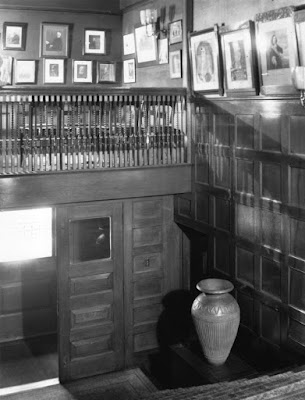 The most dramatic feature in the hall is the broad staircase leading up to the second floor. Restraint of detail and an acknowledgement of Colonial interiors result in a simple but beautifully detailed newel post and balusters in five designs, the full series repeating once on each stair tread. The balusters are loosely based on those that the Glessners saw in Henry Wadsworth Longfellow’s house in Cambridge; that house had been built in 1759 for John Vassall. 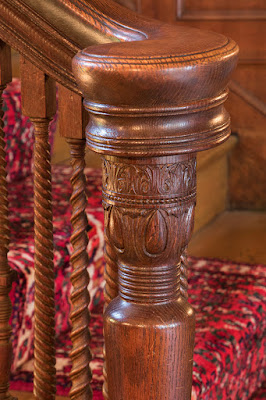 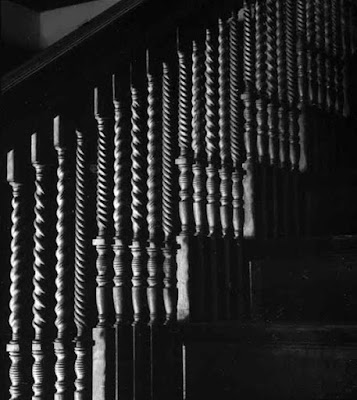 Richardson’s portrait, a heliotype copy of the Herkomer portrait completed shortly before Richardson’s death, has always occupied a place of honor by the stairway. It is the only portrait that the Glessners displayed in the hall, signifying the high esteem in which they held their architect. When the Glessners later made arrangements to deed the house to the Chicago Chapter of the American Institute of Architects, a stipulation required the AIA to always keep Richardson’s portrait on display. 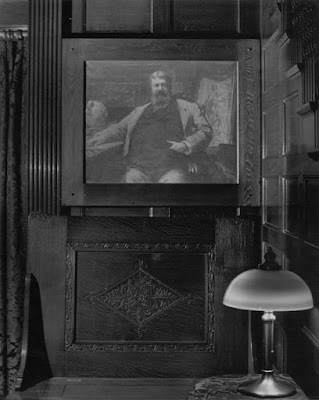 The only significant change made to the hall during the Glessners’ occupancy related to the beamed ceiling. Richardson’s plan called for two heavy timber beams oriented east-west, with one north-south beam alongside the opening for the stair. For unknown reasons, this was altered, and the north-south beam was extended, cutting one of the east-west beams in two. The result was that the floor above sagged nearly two inches, requiring it to be shored up. At this point, the Glessners added substantial iron brackets at the intersection of all the ceiling beams, and the deflection ceased. 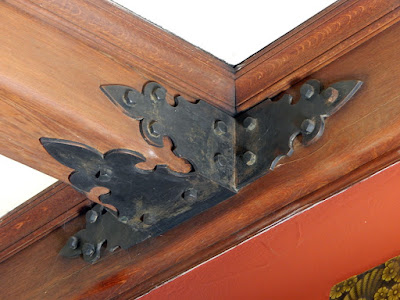 The main hall has remained a place to welcome and gather guests throughout its post-Glessner history. A photograph taken in 1946, during occupancy by the Lithographic Technical Foundation, shows a reception desk set up in front of the curved wall, where the receptionist would have had a clear view of the main door. This photo also gives a good sense of original lighter color of the oak paneled walls. 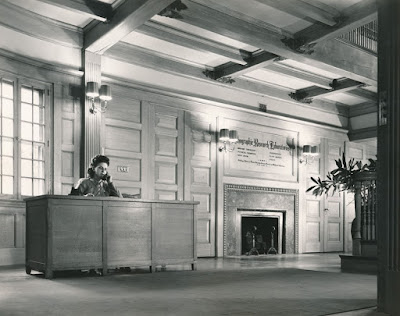 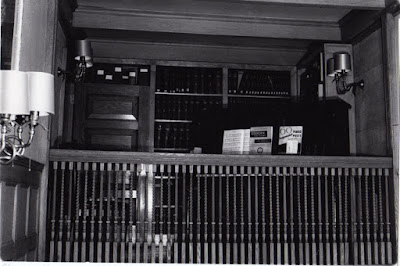 Cork alcove, 1948 with a spinet piano in place!
(Photo by Robert Florian)

When the Chicago School of Architecture Foundation acquired the house in 1966, all the plaster walls and ceilings on the first floor had been painted mustard yellow. An architecture student at the University of Illinois – Circle Campus, repainted most of the first-floor rooms to an off-white color the next year. 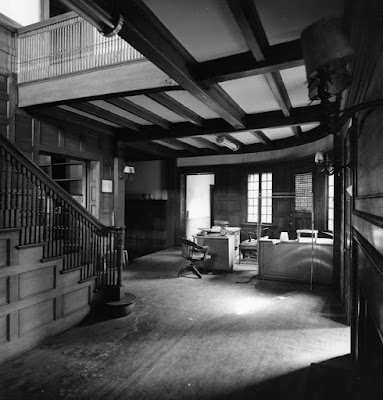 Virtually all the original light fixtures in the house were stolen during the period when the house stood empty in 1966. Details visible in historic photographs allowed for an accurate replication of the unique sconces in the hall, and the first step toward restoration of the hall involved recreating the three-arm sconces over the front stairs by early 1972; several more were made later that year in response to a fundraising campaign where people could fund a sconce for $85. (The final sconces, in the cork alcove, were not installed until 1989). 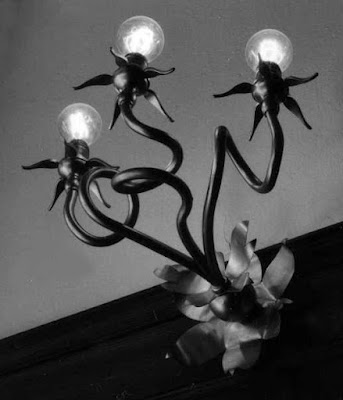 Another early project involved replicating the elaborate turned balusters, many of which had been lost through the years. In 1973, Olga Valenta came to visit the house with her daughter’s school class. A fifth-generation cabinetmaker whose family started their work in the court of Emperor Franz Joseph of Austria, Olga, and her husband Joe, recreated several balusters; many more were made over the next decade. 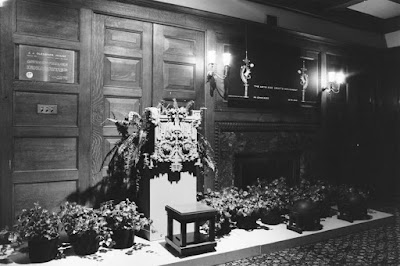 As noted earlier, the color of the oak paneling was originally much lighter throughout the main hall. The Glessner servants would have regularly oiled the wood to maintain its low gloss finish. However, in the decades following, the wood was not properly maintained, resulting in dangerously dried out wood with little original finish left intact. Subsequent oiling of the raw wood and the attraction of soil to the surface resulted in a much darker color than originally intended. Preservation architect Wilbert Hasbrouck undertook some work on the paneling in the mid-1970s to improve the overall appearance, but a full-scale restoration was beyond available resources.

The deteriorated condition of the curved door was addressed in 1976 when it was rebuilt using a combination of original and remade components. George Dark was hired to repair the leaded glass window. During transport, the window was dropped, resulting the loss of several pieces of the original light amber glass. The replacement glass is slightly darker in color, making it distinguishable from the original.

A major change to the hall occurred in 1984, when the Mohasco Corporation (Mohawk Carpet) donated carpeting that was based on the design of the original Morris & Co. Hammersmith rug used by the Glessners in the main hall. Wall-to-wall carpet was installed in the first and second floor halls and on both stairways; large area rugs were also made for the parlor and dining room. The work was coordinated by Mary Baim, president of Plywood Minnesota of Illinois. 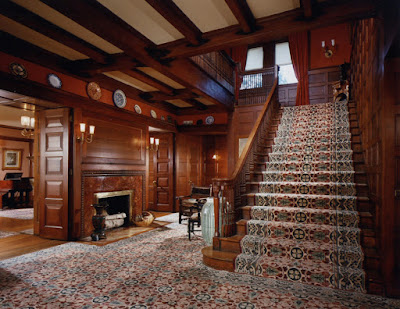 Another significant change took place in 1987 when the walls and ceilings were repainted their historic colors – a deep orange/red for the walls and a light yellow for the ceilings – based on a color analysis undertaken in 1984 by Robert Furhoff. It was the first of many projects undertaken by Furhoff to establish original colors and finishes for an accurate restoration of interiors throughout the house.

The occasion of the 125th anniversary of the completion of the house in 2012 resulted in two projects being brought to fruition. The first was to complete the wall sconces, which had been designed without the “spider” brackets needed to hold the correct glass shades. The spiders were fabricated by John LaMonica. Reproductions of the original Murano glass shades, ordered by curator Jethro Hurt in 1979 from Salviati & Company in Venice, Italy, were finally installed after sitting in storage for 33 years. 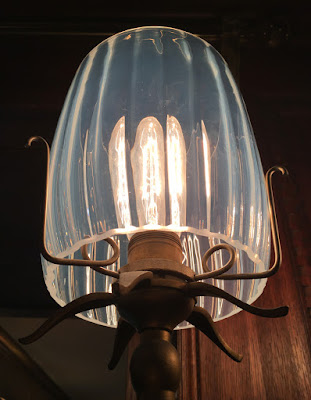 The second project involved recreating the Morris & Co. “Peacock & Dragon” drapes and portieres, working with Sanderson (the company which reproduced the fabric), and utilizing a generous donation from long-time docent Allan Vagner and his wife Angie. 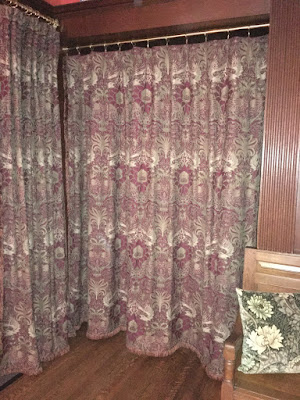 The next year saw the installation of the beautiful Morris & Co. “Lily” carpet on the front stairs, a generous donation from Robert Furhoff. Produced by Grosvenor Wilton in England, the carpet is an exact copy of the original, including the border which was recreated from historic photos by John Burrows. 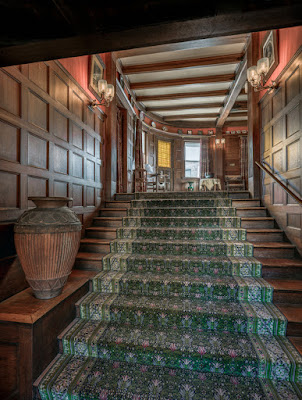 The final restoration work in the main hall took place in 2014 when all the wall-to-wall carpet was torn up and the floors hand stripped and refinished by Lee Redmond Restorations, funded by gifts received in memory of long-time docent Wilma Growney. Sections of the carpeting were used to recreate a close approximation of the Hammersmith rug (the original of which is now in the collection of the Art Institute). 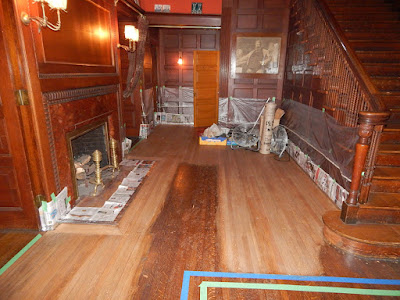 Floors in process of being hand stripped, 2014

Today, visitors experience the main hall just as they would have more than a century ago, its careful restoration returning those features that still convey Frances Glessner’s desire for a cozy and welcoming space. 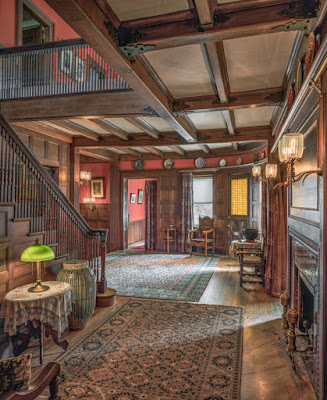