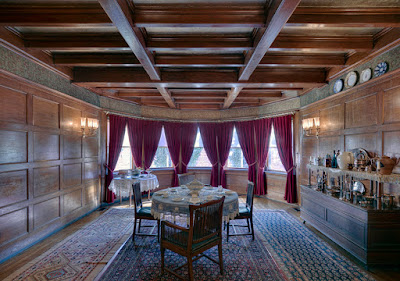 During Preservation Month 2020, we will explore four rooms within Glessner House, examining the history of the spaces, their reuse after the Glessner occupancy ended in 1936, and most importantly, an overview of the restoration work undertaken to return them to their original appearance. The focus will be on the architecture and decoration of the rooms, with less emphasis on the furnishings and decorative arts. 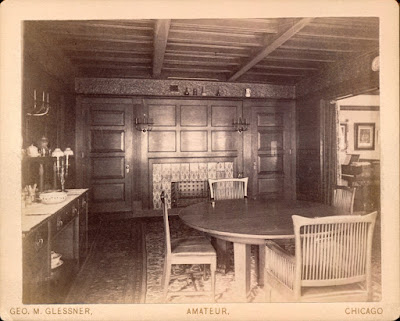 We begin with the dining room, the largest room in the house, and one of the very first to be restored. The room measures 18 by 29 feet, encompassing nearly 500 square feet of space, with an eleven-foot ceiling. Richardson’s original plan for the house called for a much taller room extending into the second story. When the ceiling height was lowered, presumably so the Glessners could have a more intimate environment for entertaining, a conservatory was created out of the space above. 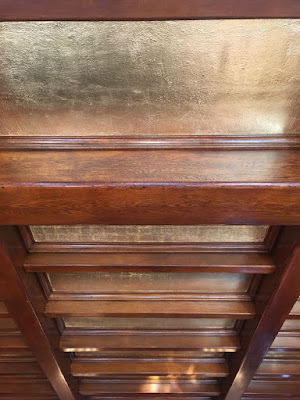 Three boxed beams form the primary structure of the ceiling, these hollow beams each containing a rolled iron I-beam. Rows of smaller solid wood beams divide the ceiling into 36 sections. Each of these plaster sections was covered with gold leaf, a detail the Glessners saw in Richardson’s office. With no central chandelier planned for the room, the gold helped to reflect the light from the five wall sconces on to the dining table. 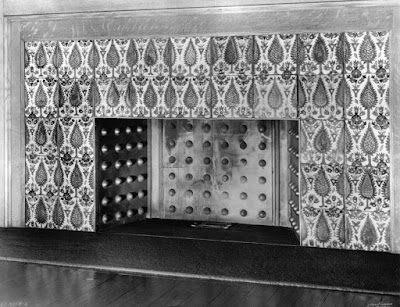 The north wall of the room is centered by a large wood-burning fireplace, set between fluted pilasters, and covered by stunning 16th-century Iznik tiles acquired from the interior designer Lockwood de Forest. There is no distinct mantel or mantel shelf, the fireplace is simply surrounded by the large panels of quarter-sawn red oak that cover all the walls of the room up to the height of the plate rail. The frieze above the plate rail was filled with a gilt and painted Japanese leather paper. Five five-arm wall sconces illuminated the space. Originally gas, they were converted to electricity in 1892, at which time the glass shades were added. The next year, the Glessners’ good friend, Isaac Scott, proposed removing the sconces and installing a series of hanging pendant lights around the perimeter of the room. The unrealized plan also called for replacing the Japanese leather frieze with elaborately carved wood panels. 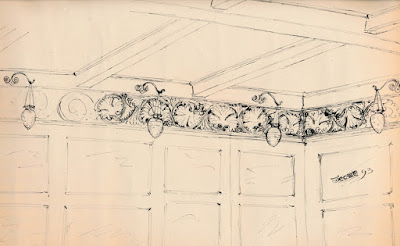 Architect Charles Coolidge designed most of the furniture in the room, all of which was made by A. H. Davenport & Co. The table, which measured six feet in diameter, could be extended to seat eighteen people; the five-windowed bay at the south end of the room added sufficient length to the room to accommodate the table when fully extended. 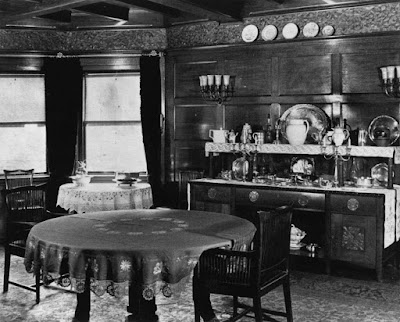 The dining room table, eighteen chairs, and elaborately carved sideboard were left in the room when the house was donated to the Armour Institute on March 31, 1938. The Institute was anxious to remove the house from the tax rolls, as the property taxes at that point were nearly $1,000 per year. The day the deed was filed for record, Prof. Joseph B. Finnegan, director of the department of fire protection at the Institute, was sent to the house along with several students so that photos could be taken showing that the house was being used for educational purposes. 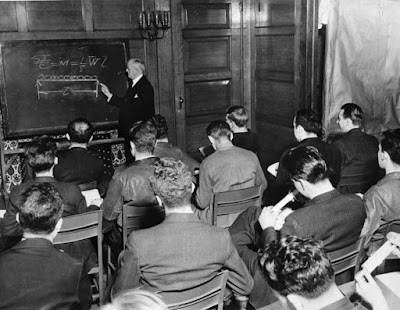 In reality, classes were never held in the dining room or anywhere else in the house. In May 1938, the Human Engineering Laboratory, a division of the Armour Research Foundation, opened in the house to conduct vocational testing. In 1945, the Lithographic Technical Foundation took over occupancy, making necessary renovations to accommodate its use as research laboratories. Changes to the dining room included the addition of fluorescent lighting fixtures, laying down a linoleum floor, painting over the gold leaf ceiling, and removing the Japanese leather to create a gallery space for showcasing printed materials. 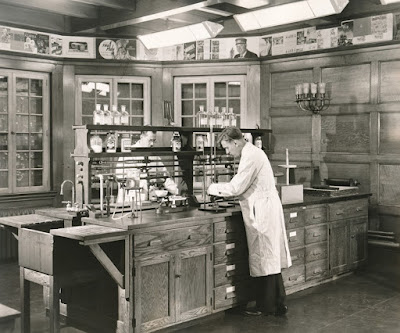 By 1965, the Lithographic Technical Foundation had moved to Pittsburgh, and the house was put up for sale. The original dining room table, fourteen of the eighteen chairs, and the sideboard, were sold off at this time; their present whereabouts are unknown. Among those involved in saving the house was Richard Nickel, who documented the condition of the interior, including two views showing the dining room (shown below), and the equipment left behind. During early meetings of the Chicago School of Architecture Foundation, which was formed in 1966 to purchase the house, the equipment and furniture were broken up and burned in the fireplaces, as the central heating system in the building no longer functioned. 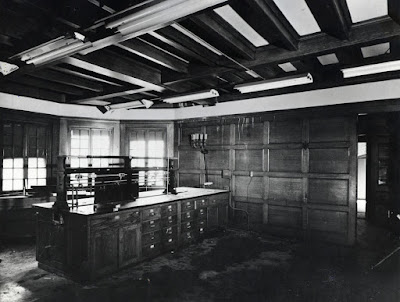 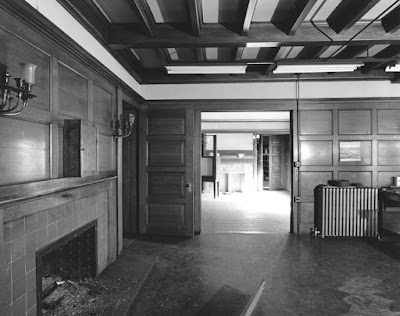 Several architecture and preservation organizations moved their offices into the house, and for a time, the dining room was occupied by the Midwest office of the Historic American Building Survey (HABS). By 1969, however, the dining room and parlor were converted into galleries for a regular series of exhibitions, curated by Robert Peters, a design partner at Skidmore, Owings & Merrill. 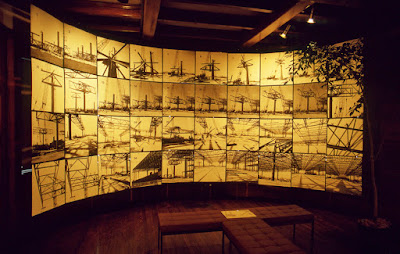 Among the exhibitions held in the rooms was “McCormick Place on the Lake: Innovations in Architecture” which opened on January 12, 1971, just nine days after McCormick Place itself opened. In March 1973, “The Arts & Crafts Movement in Chicago” exhibition premiered, to coincide with a similar exhibition at the Art Institute of Chicago. 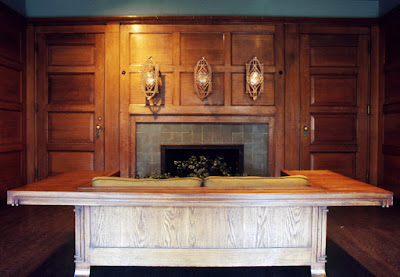 The focus of activity up to this point had been on a successful reuse of the house, rather than restoration of its interiors. The exhibition program was so popular that plans were drawn up for tearing down the west wall of the dining room and combining it with the kitchen and pantries to create a much larger space. Lack of funds, Peters departure and a scaling back of exhibitions, plus the return of original furnishings by Glessner descendants, shifted the focus toward the restoration of selected rooms. 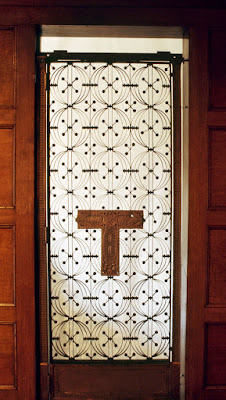 Doorway leading into the butler's pantry, with a grill from the


The first aspect of the dining room to be restored was the swinging door leading into the butler’s pantry. The Lithographic Technical Foundation had removed the door, cut it down, and reused it in a new entrance cut through the wall from the cold closet to the coach house stairwell. In 1973, John Thorpe, an early docent, made the discovery. Master carpenter John Valenta restored the door, including rebuilding the right-hand stile, and reinstalled it in its original location. 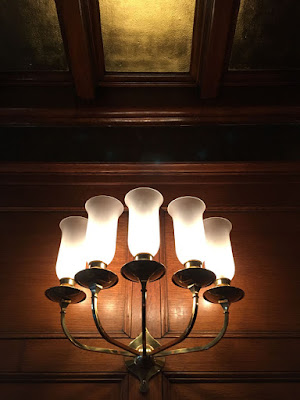 The next year, architect John Vinci designed the reproduction wall sconces, the originals having been stolen in the 1960s when the house stood vacant. They were made by New Metal Crafts. 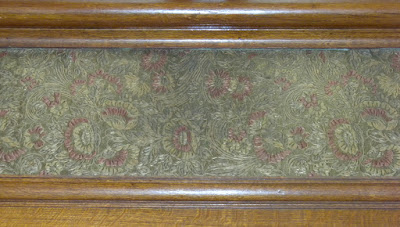 That same year, research revealed that the frieze had been covered with Japanese leather, long since removed. Through a fortunate chain of events, original unused rolls of Japanese leather were located in the attic of Chateau-sur-Mer, a “cottage” in Newport, Rhode Island. The material was purchased and installed in the dining room, no small task as it had been tightly rolled for nearly a century, requiring steaming and meticulous care to successfully flatten it for installation. 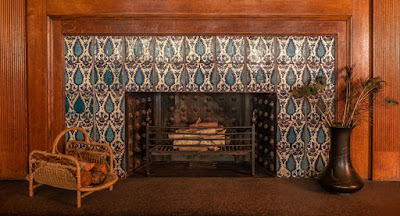 A major restoration project involved the recreation of the Iznik fireplace tiles, which Frances Glessner Lee had removed in April 1938 for use in her cottage in New Hampshire, just after donating the house to the Armour Institute.  Utilizing two original tiles which had been returned by Lee’s children, Leonard Currie, head of the Art and Architecture Department at the University of Illinois in Chicago, volunteered to obtain new tiles. He engaged the services of a student, Paula Garrett Ellis, who hand painted the twenty-eight reproductions. In 1977, Currie installed the reproductions and the two original tiles on the fireplace. 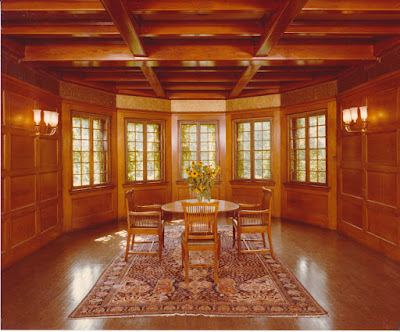 In the early 1980s, the twelve-light double casement windows, which had been installed about 1945 on the inside of the bay windows, were removed, and reproductions of the red velvet drapes installed. The red color was documented in the inventory of the house taken after John Glessner died in 1936. Additionally, his granddaughter Martha Lee Batchelder, confirmed the color and even accompanied the curator to the Merchandise Mart, where she pointed out fabrics that were similar to those she recalled being used in various rooms in the house. 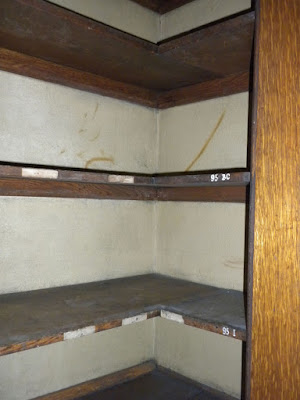 Silver closet prior to restoration

The butler’s silver closet was fully restored in 2013. The project involved refinishing the wood, repainting the walls in the historic color, and adding LED lighting and a glass enclosure to showcase and protect the Glessners’ large collection of silver. A highlight of the display is six pieces of silver handcrafted by Frances Glessner. 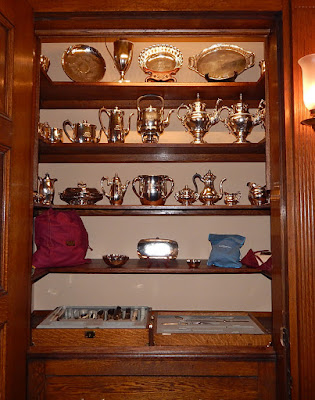 In 2015, Glessner House was presented with a wonderful opportunity to recreate the gold leaf ceiling. (An earlier attempt had been made in 1989, when aluminum leaf was installed, over which a gold-pigmented varnish was applied.) The Society of Gilders was planning to hold its annual conference in Chicago in June 2015 and was looking for the opportunity to donate the services of its members to a non-profit. The ceiling project was a perfect fit, as it could be completed during the period members would be in the city. The gold leaf, enough to cover 240 square feet of plaster ceiling, was funded by a generous gift from the Richard H. Driehaus Foundation. Over five days, a crew of 8-10 gilders from several countries completed the project. 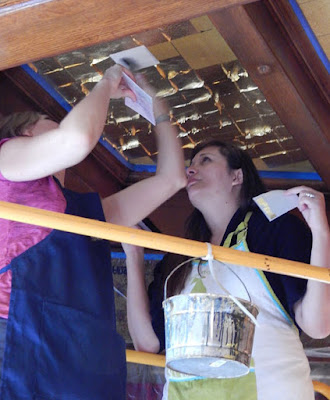 Today, the fully restored dining room presents an accurate window into the past, allowing visitors to experience the space, during tours and selected dining events, as it was envisioned for use by the Glessner family and their guests more than a century ago. To take a virtual tour of the room, click here. 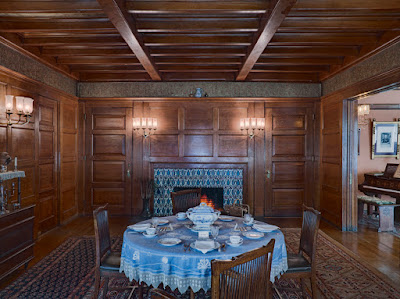