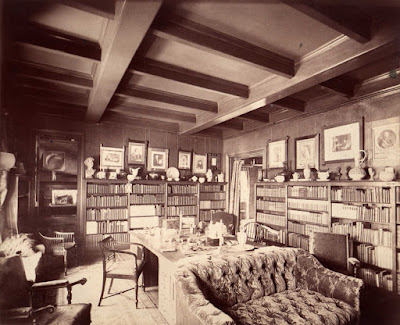 During Preservation Month 2020, we are exploring four of the main rooms at Glessner House, examining the history of the spaces, their reuse after the Glessner occupancy ended in 1936, and most importantly, an overview of the restoration work undertaken to return the rooms to their original appearance. The focus will be on the architecture and decoration of the rooms, with less emphasis on the furnishings and decorative arts. 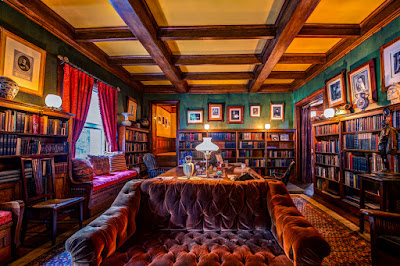 This week we look at the library, one of the most significant rooms in the house, both for its direct link to Richardson and in how its use by the Glessners demonstrates the different path they took from their neighbors. Additionally, it was the first room to undergo restoration, signaling the start of an important transition for the building from adaptive reuse to a historic house museum interpreting the period of the Glessner occupancy.

When the Glessners met with H. H. Richardson at his Brookline, Massachusetts home and office in September 1885, they were especially impressed with his office. John Glessner later wrote, in part:

“Mr. Richardson had his home and office in Brookline, just out of Boston.  His private office was a large and beautiful room, with just enough disorder always to be pleasing, with stacks of fine books, with rare and beautiful objects scattered over shelves and tables, a great fireplace in one end before which, with back against a large table, was a deep and most comfortable lounge or couch . . . This is the room I liked the best.” 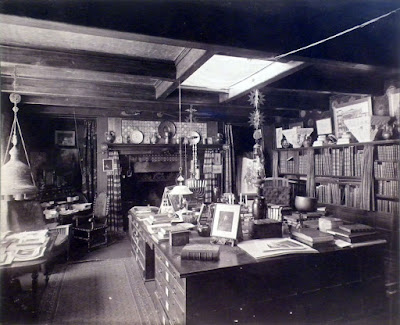 Richardson provided the Glessners with several large mounted photographs of the room (which are in the collection today). Upon examination of the photos, one can easily see the significant details that were carried forward from this room into the Glessners’ library – the beamed ceiling, mid-rise bookcases, huge central partners desk, alcove, and a comfortable couch at the end of the desk facing the fireplace. Additionally, details like the Morris & Co. “Peacock & Dragon” fabric and the large singing bowl, were replicated in the Glessners’ main hall.

On December 4, 1887, the first Sunday that the Glessners spent in their new Prairie Avenue home, Frances Glessner recorded the following event in her journal:

"Today we took a carriage and went to the old home. We kindled a fire in the library and I lighted a lantern which I carried over and brought the light home - then from that I lighted a fire here in the library. Professor Swing read a few verses from the 5th chapter of Matthew and made a beautiful prayer. Now I feel that the house is dedicated. And so ends a very happy day and prosperous beginning." 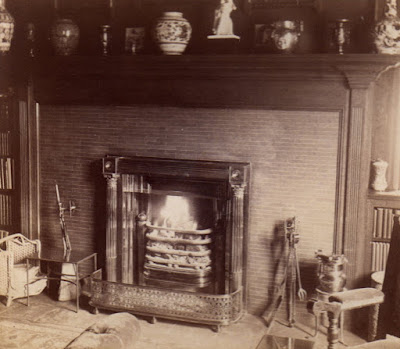 The fact that this little ceremony took place in the library is significant. Whereas the parlor and dining room were designed for entertaining friends and family, the library was the “family room.” A most interesting aspect of the room was its intended use equally by John and Frances Glessner. In other large houses of the period, the library was always the domain of the male head of household – the place where business would be conducted, and where brandy and cigars could be enjoyed. However, the large partners desk in the Glessner library clearly portrays its use by both John and Frances Glessner, and photos show this room being enjoyed quietly by just the two of them. The thousands of books that lined the bookshelves speak to their significant shared interests in everything from architecture and design to European and American history and biography. 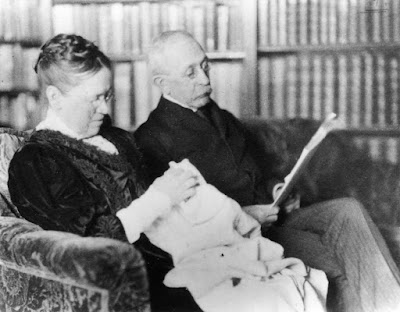 John and Frances Glessner in the library, circa 1910

The idea of the library as a family space was reinforced in later years when the Glessners became grandparents, with the grandchildren visiting every Sunday. Grandfather Glessner would stand in the north window of the library to watch for his grandchildren heading south from their homes at 1700 and 1706 S. Prairie Avenue. Upon arrival, large boxes of toys would be pulled out of the alcove and the grandchildren would play in the room while their grandparents sat at the desk – Frances Glessner writing out her weekly journal entry and John Glessner tending to his correspondence and business matters.

Of course, the room was also the site of Frances Glessner’s Monday Morning Reading Class, which  met here from 1894 until 1930. A paid professional reader, standing in front of the fireplace, would read passages from books selected by the class, while the ladies sat on the sofa, window seats, and scattered chairs about the room and into the hall, working on various types of needlework. 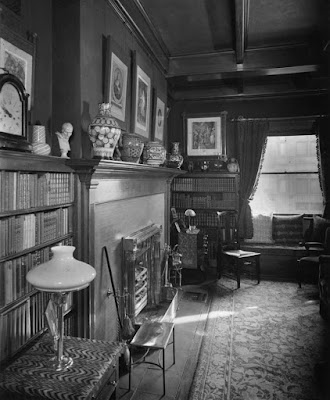 When the house was given to Armour Institute in 1938, the partners desk was among the items of furniture left behind. A photo taken on March 31, 1938 shows Prof. Joseph B. Finnegan, director of the department of fire protection engineering, conducting a seminar. The photo was staged to show that the house was being used for educational purposes so that it could be exempted from property taxes. In reality, classes like this were never held in the library. 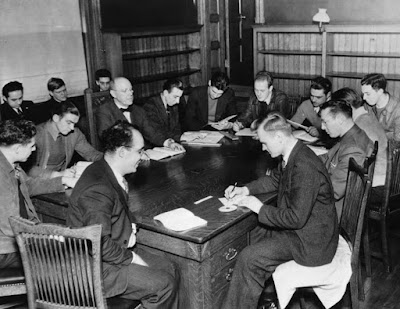 In October 1945, the Lithographic Technical Foundation opened its research laboratories in the house, and the library appropriately became the research library. The room was modernized in terms of décor, although the bookcases were initially left intact, and the partners desk was left in place. As the library continued to grow, the bookcases were extended up to the ceiling and lower shelves in some cases were removed to accommodate radiators. 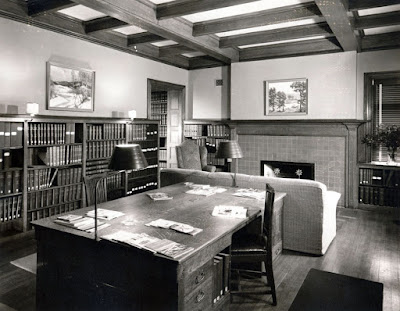 The library became the center of activity when the house was rescued from demolition in 1966. Early meetings of the Chicago School of Architecture Foundation, specifically formed in April of that year to purchase the house, were held here. 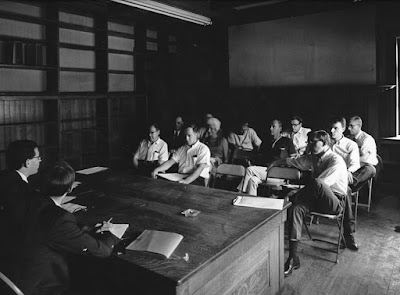 Shortly after the house was acquired that December, the bookcase extensions were removed, and as the heat in the house was no longer functioning, the wood was burned in the fireplace to keep the room comfortable. Eventually, two large electric heaters were acquired until a central heating system could be installed.  The room was thoroughly cleaned and set up as the first space in the house for Foundation activities to take place. 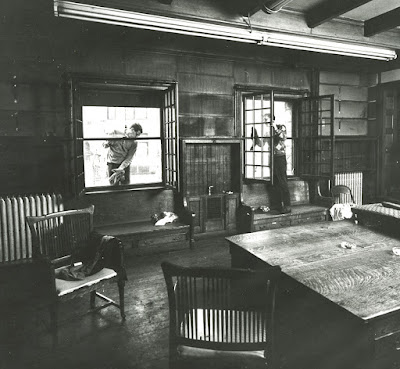 Staff and docents would sit around the partners desk and eat their brown bag lunches in those early days. Marian Despres, a charter board member and later president of the Foundation, also recalled in Chicago Architecture Foundation, The First Twenty Years 1966-1986:

“By March 1967, Charles Jackson, who had been hired as a watchman, had moved into the basement of Glessner House . . . The only problem that arose during his tenancy was that sometimes, when a distinguished visitor was being entertained in the library, the aroma of cabbage and onions would waft up through the registers to mix with the brandy and cigar atmosphere of the House.” 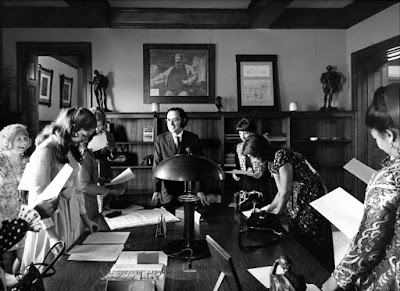 Docent Bob Irving regaling staff and docents, 1972. Note Richardson's portrait on the wall, which was returned to the main hall once the library was restored.

In early 1973, it was announced that the library would be restored, utilizing generous funding from the family of architect Alfred S. Alschuler. Marian Despres was Alschuler’s daughter, and she rallied the family to the cause.

The restoration work began with an analysis of the unique wall surface in the room. John Glessner had written in his 1923 The Story of a House:

“At the time the house was finished, the green walls of the library were painted blue over yellow, after repeated experiments by John Leary, an artist from Davenports, and it has not been necessary to repaint them since.”

Samples of the original paint were taken to the conservation department of the Art Institute, where they were analyzed by Marigene Butler. She confirmed John Glessner’s information, noting a yellow base over which was stippled a blue translucent glaze, giving the room its color. James O’Hara, of O’Hara Decorating Service, undertook the meticulous work to repaint the walls using the same method employed originally by Davenport, also returning the ceiling to its soft yellow color. 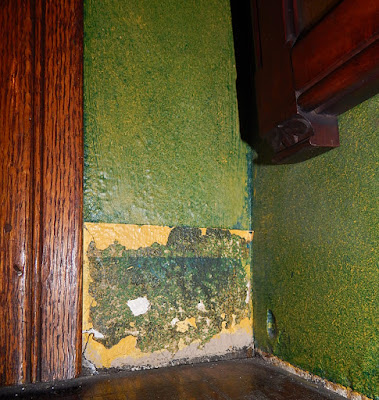 A section of the original wall surface was left exposed for future analysis.

The wall sconces were replicated using a surviving original fixture in the library alcove under the main stairs, with glass shades based on historic photographs. At the same time, the partners desk was rewired so that the two outlets on the desktop were made functional once again. Joseph and Olga Valenta recreated the missing bookshelves, baseboards, and missing elements of the south window seat, repurposing oak discarded from other areas of the house when possible.  Thirty-nine cases of books, returned by the family, were inventoried and placed on the shelves, and other decorative objects, including many steel engravings in Isaac Scott frames, were returned to their original locations. 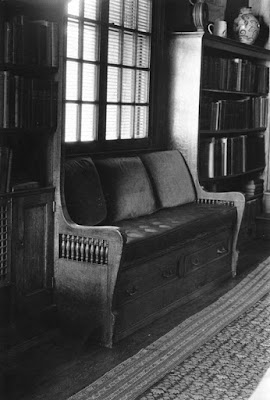 The room was formally dedicated exactly 46 years ago, on May 21, 1974, with many members of Alfred Alschuler’s family present, including his widow and his son, also named Alfred, who continued the architectural practice after his father's death in 1940. 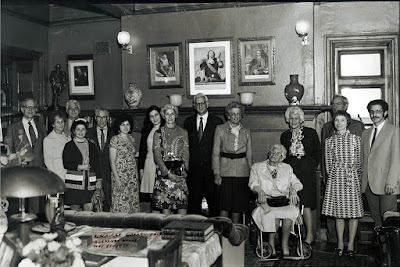 Members of the Alschuler family gathered for the dedication of the restored library on May 21, 1974 (photo by Tom Yanul)

Marian Despres noted the significance of the library restoration in the annual report to the Foundation membership in September 1974:

“The library is our first fully restored room, and although it is difficult for many of us to refrain from using it as before as a meeting place, a gathering spot to casually light up a cigarette or lay down a glass, I’m sure you share our pride in having Prairie Avenue’s first authentically restored room.” 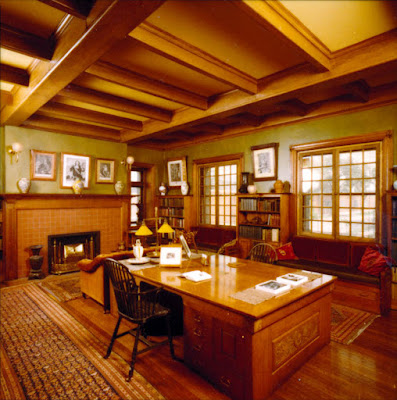 Library prior to restoration of the fireplace, 1974 (photo by Steve Grubman)

The fireplace was restored soon after, using reproductions of the long red unglazed tiles made in England, and the original brass fireplace surround, which had been found in a “deserted shed” at The Rocks in New Hampshire. The drapes, which had remained in the house when given to Armour Institute, were identified as “Bird and Vine” by Catherine Frangimore, a specialist in 19th century wallpapers and fabrics at the Cooper Hewitt Museum in New York. The 1936 inventory of the house, made after John Glessner’s death, confirmed that they were red wool. Reproduction fabric was ordered from Scalamandre, the only firm which had the required jacquard looms. A minimum order of 50 yards was required, so the drapes for the second-floor hall, which used the same pattern, were made at the same time. All of the drapes were installed in the spring of 1985, along with matching cushions on the library window seats. 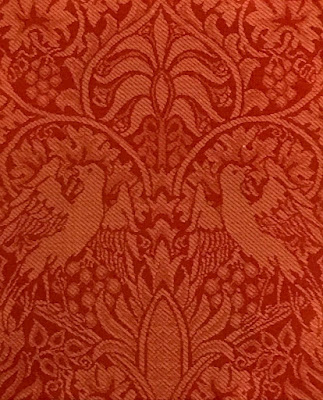 The final restoration work in the room took place in 2012, during the 125th anniversary of the house. Utilizing the 1923 photos of the room as a guide, six large pillows, in four different patterns, were made for the window seats, improving the “cozy” feel of the room. 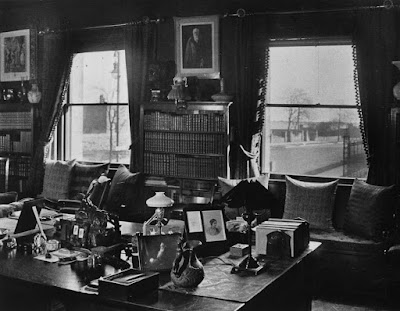 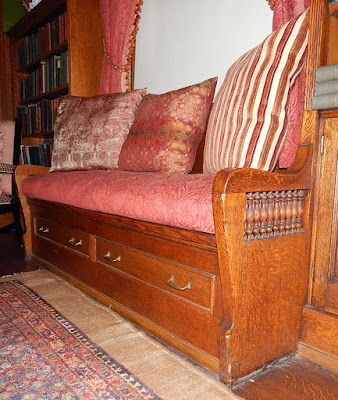 Today, the library provides a more intimate view of the Glessners than can be found in most of the other rooms. The large partners desk, with an open book and papers scattered about, gives the impression they will be back at any moment to enjoy this beloved room, where they could step away from the demands of business and social life, to spend quiet moments together and to share their many common interests. 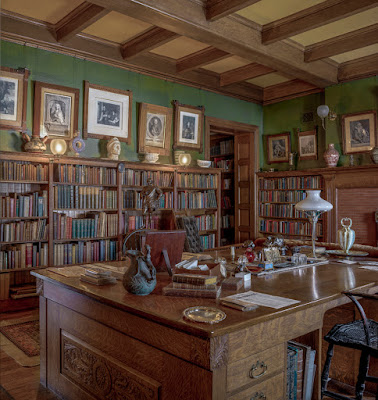