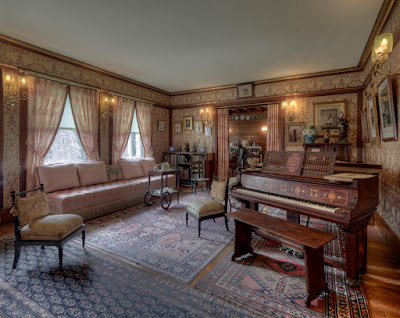 During Preservation Month 2020, we have explored each of the first-floor public rooms, looking at the history of the spaces, their use after the house passed out of the Glessner family, and the restoration work undertaken to return the rooms to their late 19th-century appearance. Our final article looks at the parlor, a recent project, and one of the most extensive ever undertaken. 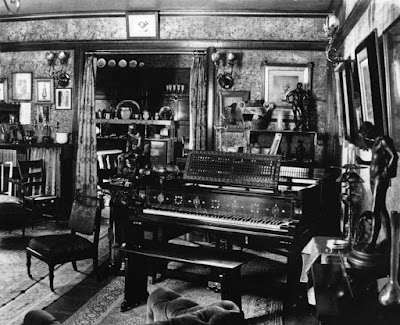 Whereas the library was the room most utilized by the family for their quiet moments together, the parlor was specifically designed for entertaining friends and special guests. Additionally, its intended use for musical performances is reinforced by the fact that the ceiling lacks the beams seen in the other first-floor rooms, and is also nearly one foot lower in height, both details improving the acoustics. 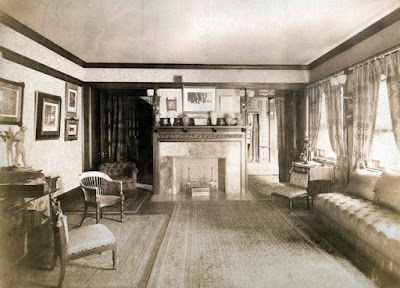 The three large windows facing south into the courtyard are the most fully realized expression of Richardson’s innovative plan to turn the public rooms away from the street. Not only do the windows admit the maximum light and warmth from the sun, (most welcome on the wintery days when the family was in residence), they also look out into a fully-enclosed space, thus providing an unusual level of privacy that was rare in an urban residence.

The entrances into the parlor are oriented to heighten the intimate feel of the space. A pair of doorways from the main hall flank the central fireplace on the east wall. On the west wall, a single central doorway leads to the dining room. With this arrangement, the long vista common in many large homes, designed to emphasize the spaciousness of the house, is broken, creating a space complete unto itself, and not simply part of a progression of rooms. 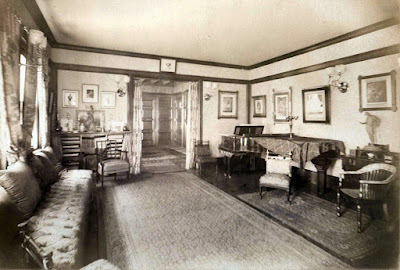 The fireplace features finely carved detailing beneath the mantel shelf, utilizing the acanthus leaf motif seen elsewhere on both the exterior and interior of the house. Richly colored Siena marble, in soft yellow and rose tones, compliments the pale-yellow tiles of the fire back which measure six inches long but only one-half inch in height. The tiles were designed by the English firm of Craven Dunnill & Co. which also designed the tiles for George’s fireplace and the floor in the entry vestibule. 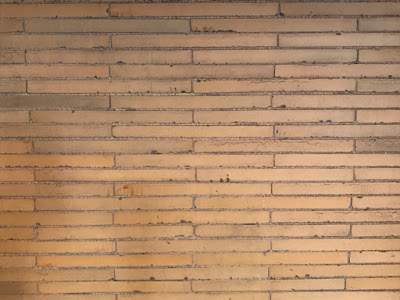 A similar color palette was utilized in the window draperies and the portieres in the doorway to the dining room, a Morris & Co. pattern known as Kennet. The two doorways to the main hall featured elaborately embroidered portieres of another Morris design, which Frances Glessner had stitched by women at the Chicago Society of Decorative Art and delivered to the house in November 1888. (In 1918, the Glessners donated these portieres to the Art Institute of Chicago and one panel remains in the collection although it is not currently on display). 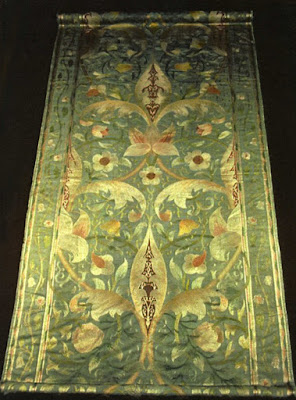 The walls of the parlor are framed with a simple broad trim that connect the baseboards to the picture rails up above; the same trim is used around the windows. The original wall treatment was a floral wallpaper executed in various shades of yellow, as determined by analyzing small fragments uncovered by finishes analyst Robert Furhoff in 1984. The source of the wallpaper is unknown, and it is not a Morris & Co. design. 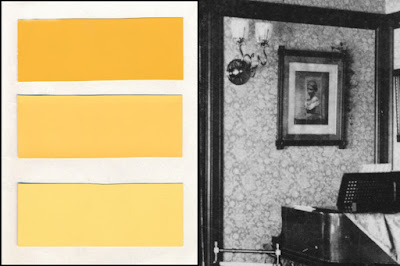 Following the installation of electricity in 1892, the room was redecorated with a richly colored burlap wallcovering executed by the English designer William Pretyman. At the same time, various portions of the wood trim, including the cove moldings, were covered with gold leaf, to coordinate with the metallic paints and glazes used in the wallcovering. 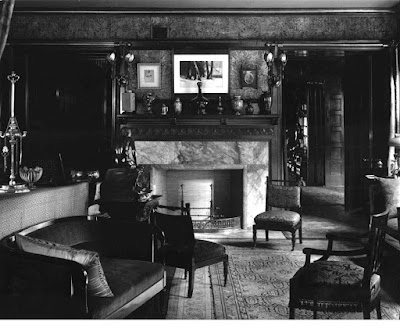 The last major change made to the room took place in 1904, when the Glessners purchased new shades for the wall sconces, selected while spending the winter in Santa Barbara, California on account of Frances Glessner’s health. The shades chosen were designed as six-petaled flowers, each petal being made from an abalone shell. The incredibly rich colors of these shades when illuminated, combined with the coloring of the wallcovering, must have been truly enchanting. 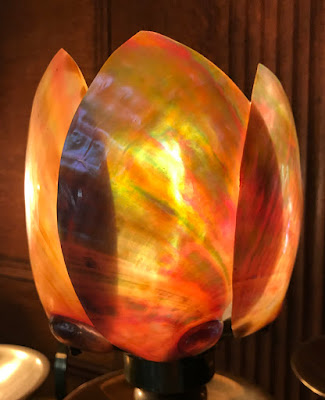 The parlor was utilized for all formal entertaining, and its size reflects the Glessners preference for smaller gatherings, where they could easily interact with all their guests. When larger musical entertainments were held, furniture could be removed and additional seats added, extending into the main hall if necessary. On a few occasions, such as the full sit-down dinners held for the symphony orchestra, the 900-pound Steinway piano was moved out of the room as well!

An interesting photo of the parlor was taken on March 31, 1938, the day that Armour Institute took possession of the house. The Glessners’ original six-foot-wide dining room table, and several chairs, are seen being used by members of the Armour faculty. It is the best surviving picture of the dining room table, which was sold off in the mid-1960s; its present whereabouts are unknown. The photo also reveals the faded condition of the Pretyman wallcovering, which helps explain why it was painted over soon after. 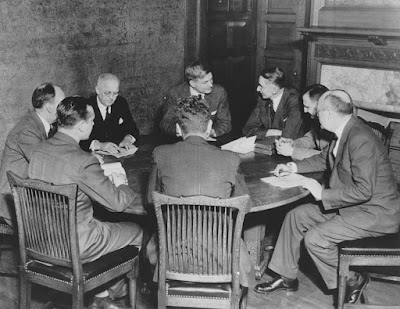 When the Lithographic Technical Foundation moved into the house in 1945, the parlor was converted to use as a research laboratory, like the adjacent dining room. The north doorway to the main hall was closed off to accommodate an alcove for a large light box, and the oak floors were covered in linoleum. 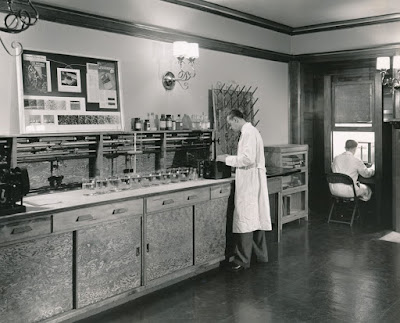 After the Chicago School of Architecture Foundation took possession of the house, the parlor and dining room were renovated for use as exhibition galleries. As the original sconces were missing, track lighting was added to the room, and the walls were painted white, the original picture rail being utilized to display exhibit panels and artwork. 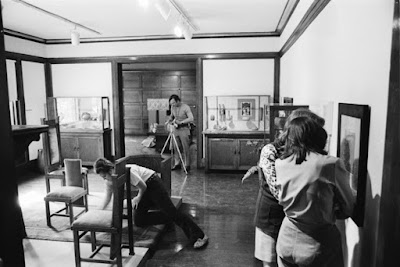 By 1974, the process of converting the parlor to a more accurately restored room was begun with the removal of the track lighting and the recreation of period light fixtures. These were based on the original sconces used in the second-floor main hall and were later replaced by more accurate sconces in 1983, complete with reproductions of the original hand-blown glass shades. The parlor was used to display original Glessner furniture, decorative arts, and steel engravings in Isaac Scott designed frames, although not necessarily as the Glessners originally displayed them. 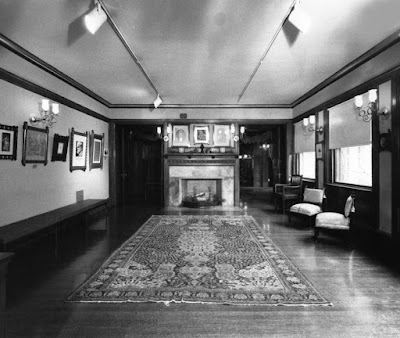 A major change to the parlor took place in 1979, when the original custom-made Steinway piano was returned to the house, a generous gift of Gardner Cowles, publisher of numerous newspapers and Look magazine. During a visit to the house, Cowles learned that the original piano was in the president’s house at Harvard University, where he sat on the board of trustees. He purchased and donated a new Steinway to Harvard, and the original Glessner piano was released and returned to its original home. It was dedicated at a concert in April 1980 with a recital by Etsko Tazaki, a protégé of Sir Georg Solti, who attended the celebration with his wife, Lady Valerie Solti. 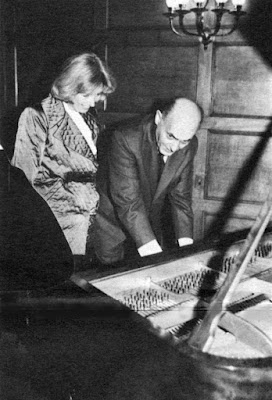 Sir Georg and Lady Solti at the piano dedication, April 1980

Although the original Pretyman wallcovering had been painted over numerous times, a small unpainted section had survived behind the back plate of one of the wall sconces. In 1991, this sample was analyzed by Grammar of Ornament, a Denver-based firm that specializes in the restoration of historic interiors. A sample section was prepared and placed above the picture rail on the west wall. For the next twenty years, plans of being able to recreate the wallcovering remained a dream. 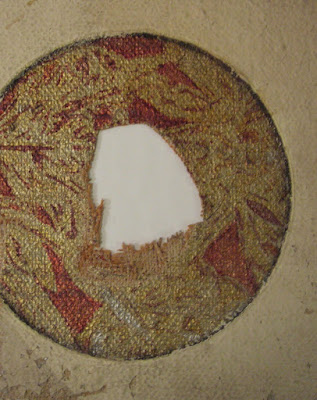 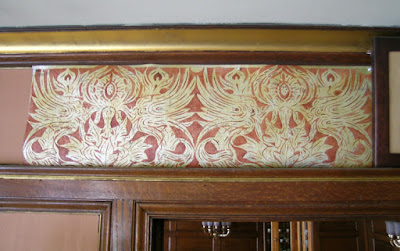 In June 2009, long-time docent Aileen Mandel (class of 1986) passed away. Having provided a generous gift for the restoration of the parlor shortly before her death, her three children generously directed memorials to the project, providing seed money for the recreation of the wallcovering. Less than a year later, in May 2010, Bunny Selig, a member of the first docent class of 1971, died, leaving a generous bequest to Glessner House, along with a second gift in honor of fellow 1971 docent class member Robert Irving. Selig, who minced no words, often noted during her tours that “Mrs. Glessner would be mortified to see her parlor looking like this,” a reference to the pale “Campbell’s tomato soup” orange walls and bare windows. The Mandel and Selig gifts, combined with a grant from the Driehaus Foundation and other gifts, allowed the long-awaited restoration of the parlor to begin. 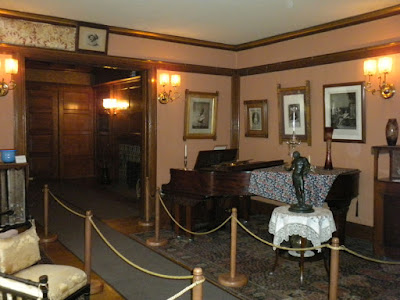 Parlor prior to restoration, February 2011

Grammar of Ornament was engaged to recreate the wallcovering, utilizing a canvas that had the same texture as the original burlap. New technology allowed for a deeper analysis of the Pretyman-designed original, revealing eight layers of metallic paints and glazes, which were painstakingly replicated, using two stencils highlighted with hand-painted details. The wallcovering was installed over three days in early October 2011. 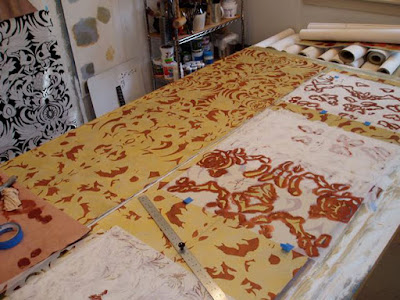 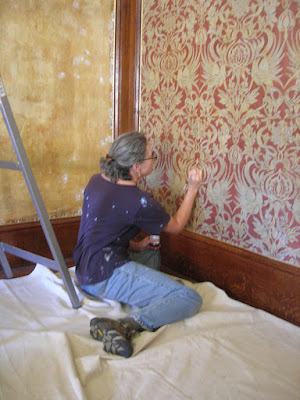 Touching up seams during October 2011 installation

Prior to this, the original wallcovering had been carefully removed, labeled, and stored, for future analysis and study. Lee Redmond Restorations made the necessary repairs to the wood finishes and gold leaf trim that had been obscured by paint through the years.

One of the original Kennet drapery panels had been donated to the Art Institute in the 1970s. It was pulled from storage so that the original colors could be determined. That information was then sent to Trustworth Studios in Plymouth, Massachusetts where a digital version was created and printed onto fabric, closely replicating the original appearance. Appropriate tiebacks and fringe were obtained, and brass tieback hooks were installed utilizing the same screw holes as had been used for the originals. John LaMonica replicated the drapery rod brackets, which were also reinstalled into their original screw holes. 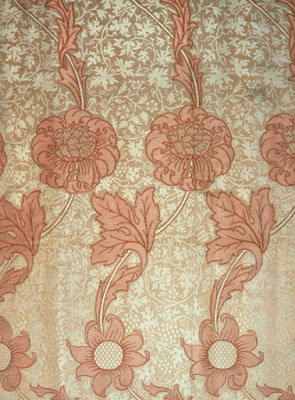 The ample 10-foot-long banquette, which originally sat in front of the windows, had been discarded by the Glessners in 1905, when John Glessner inherited his parents’ sofa. An analysis of two photographs of the parlor, taken in 1888 by Absalom D. Edgeworth, provided detailed information, allowing for an accurate reproduction of the banquette, down to the number of tufts in the seat, the height of the fringe, and the size and design of the pillows. Bob Furhoff designed the piece and advised on color and fabric. This work was undertaken by Fine Woodworks and G&A Upholstery.  (Note: I remember the day Scott Chambers from Fine Woodworks called to make sure the banquette would fit through the front door, to which I replied that the front door was big enough for H. H. Richardson to fit through! He didn’t get the joke, so I assured him the banquette would fit). 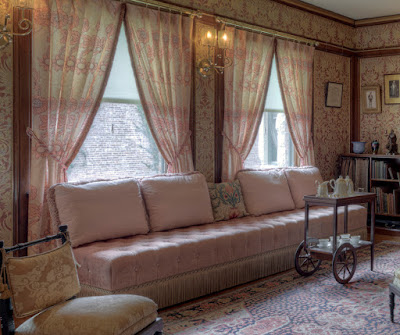 
The parlor was dedicated at a great celebration and ribbon-cutting held on October 14, 2011. Aileen Mandel’s three children cut a teal ribbon on one of the two main hall doors leading the parlor, the color symbolizing her courageous battle with ovarian cancer. Members of Bunny Selig’s family cut a purple ribbon at the other door, purple being the only color Bunny wore for the last several decades of her life. Guests were treated to an illustrated lecture on the life and career of decorator William Pretyman, given by docent John Waters. 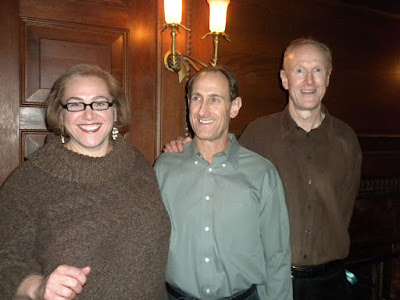 Today, the parlor is a fitting tribute to these two docents, who devoted countless hours sharing their passion for Glessner House and its family with countless visitors. The work of numerous craftsmen to restore each element of the room allows those visitors to experience the space exactly as intended, as though they had been invited by the Glessners for an evening of conversation and music. 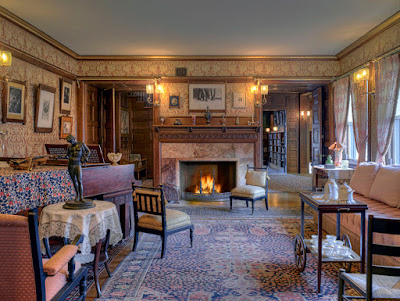