In last week’s article, we looked at the first houses constructed on Prairie Avenue in the blocks immediately south of 16th Street. This week, we will explore the very different development of Prairie Avenue south of present day Cermak Road.

During the 1850s, several substantial homes were constructed on the 1700 and 1800 blocks of Prairie Avenue. The layout of South Township created natural dividing lines to the south at Ringgold Avenue and to the west at State Street. Development west of State focused on workers housing for those employed in businesses along the Chicago River. Likewise, development south of Ringgold was always closely tied to the businesses that operated there, and the many immigrant workers that settled close by.

Nathaniel Goold – 2216 S. Prairie Avenue
In 1851, Nathaniel Goold purchased a tract of land for $471 immediately south of Ringgold between Prairie Avenue and Cottage Grove to the west. He subdivided the land into eight lots of which he sold the six facing Ringgold at a nice profit, retaining the other two for his new frame residence. Goold was in the music business, later making his own organs and pianos, and incurred $2,000 in uninsured losses when his Lake Street store was destroyed in the “Great Conflagration” of October 1857 (as it was known prior to the Great Chicago Fire of 1871). He manufactured pianos and organs in the factory behind his home, although by the time of his death in 1887, he had switched to the making of hansom cab bodies. 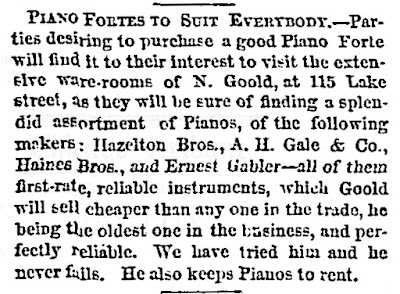 1863 advertisement from the Chicago Tribune

LATER HISTORY: The family continued to reside at the old homestead and in 1902 replaced it with a four-story brick building containing eight apartments. Advertisements noted that both six- and eight-room “modern, sumptuous” apartments were available for $60 to $85 per month (the equivalent of $1,700 to $2,500 today). These were apparently very fine apartments indeed, as early tenants included Helen Macbeth and Anna Robertson (Frances Glessner’s two sisters); Frances Glessner Lee’s estranged husband, Blewett Lee; and Enrico Tramonti, principal harpist with the Chicago Symphony Orchestra.

Carville
A few blocks to the south, at Twenty-Sixth Street, the American Car Company established its works making railroad cars, taking advantage of the Illinois Central tracks to the east, completed in 1856. The small community of worker’s cottages around the factory became known as Carville. St. Agatha’s Academy was established in 1854 as a shelter and school for orphans; their brick building was located at the northwest corner of Calumet and 26th Street. St. James Roman Catholic Church was organized the next year for the 25 Irish families residing in Carville. The church initially met at St. Agatha’s and in 1858 constructed a frame church on Prairie Avenue and 27th Street. 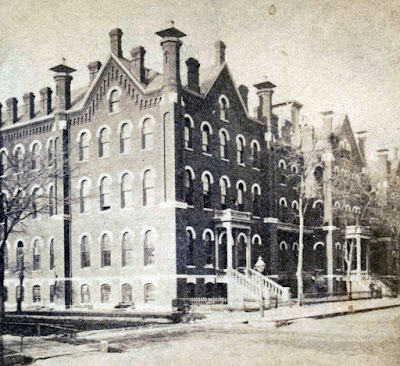 LATER HISTORY: The car works at Carville only lasted a few years, leaving the small community depressed. In 1863, St. Agatha’s was converted to its new use as Mercy Hospital. In 1880, St. James completed a large stone church at 2907 S. Wabash Avenue, designed by architect Patrick C. Keely. Despite significant preservation efforts, the church was demolished in 2013, although the adjacent rectory at 2942 S. Wabash, a beautiful example of the Richardsonian Romanesque, still stands. 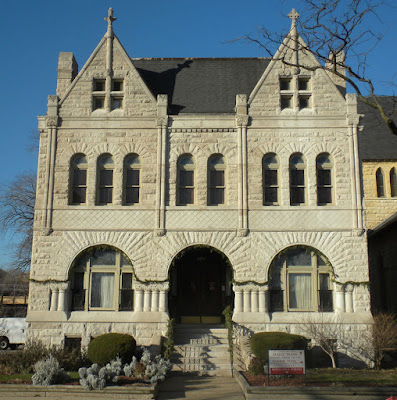 Stockyards
Several small stockyards established themselves in the general vicinity during the 1850s. The Michigan Southern stockyard was located on Michigan Avenue a few blocks south of Ringgold Avenue. John Sherman established his stockyards at 31st and the lake, and the Cottage Grove stockyards ran along that street from 29th to 35th Streets. On Christmas Day 1865, the Union Stockyards opened, consolidating many smaller stockyards around the city. John Sherman was made the first president, and he later built his substantial mansion at 2100 S. Prairie Avenue, an early design of Burnham & Root.

An 1859 article in the Chicago Press and Tribune also made note of the new packing house of Thomas Nash on Ringgold at Cottage Grove (which would have been immediately west of Nathaniel Goold’s property). The article went into detail about Nash’s process of singeing hogs, which is unimportant here, but worthy of note is that he planned to ship about 1,000 hogs to England that season, indicating this was a substantial operation.

Omnibuses
The most common form of public transportation at this time was the omnibus – a horse-drawn vehicle, set on springs for comfort. A typical omnibus would have two wooden benches along the sides of the cabin, with the passengers facing each other. Larger double-decker omnibuses had benches positioned back-to-back on the open upper level. The driver would sit outside the cabin on an elevated front-facing bench. 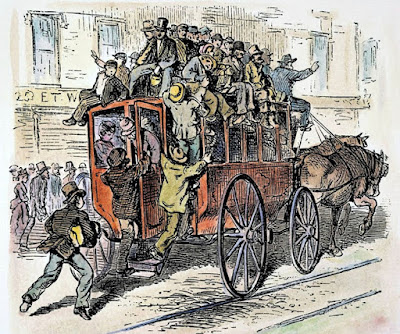 To accommodate the residents south of Ringgold Place, by 1855 a line of omnibuses ran from the Lake Street bridge to State Street, and then south to Ulich’s Hotel at the corner of State and Ringgold. Cars ran every 15 minutes. Just two years later, it was announced that the line was being extended as far south as Merrick’s Tavern at Cottage Grove and 35th and would run on a newly macadamized road (macadam being an excellent, hard material for paving). A newspaper article from 1857 noted that “this arrangement will be of great service to the people of that populous suburb (Carville).”

In 1859, the Chicago City Railway Company was incorporated, and the omnibuses were gradually replaced by horsecars that ran on rails, making the journey even more comfortable.

Next week, in the fourth and final installment in this series, we will return to Prairie Avenue between present day 16th Street and Cermak Road, to discuss the houses constructed during the years of the Civil War.