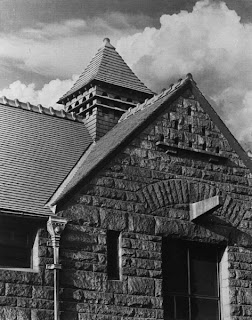 One of the many interesting architectural features of the Glessner house is a pair of dovecotes at the west end of the building over the coach house.  A dovecote is a structure built to house the nests of pigeons or doves.   It can be free-standing or built into the end of a house or barn.  The use of these structures dates back many hundreds of years to a time when pigeons and doves were an important source of food (both flesh and eggs) and dung, especially in .  Although the Glessners left no record as to why they had the dovecotes incorporated into the design of the house, an analysis of their structure from the inside clearly indicates that they were functional, and not merely architectural ornaments.
During the summer of 2011, museum volunteer Robert Herbst explored the attic space over the coach house to see how the dovecotes were constructed.   The dovecote built into the north facing gable, which consists of nine openings, is accessed from the inside of the coach house by way of a small staircase.  The openings measures 5-1/4” wide by 9-1/2” high and are 23 inches deep.  A sliding wood door measuring 8” by 11” inches provides access to each opening.  Several were found to still contain significant amounts of nesting materials and even egg shells. 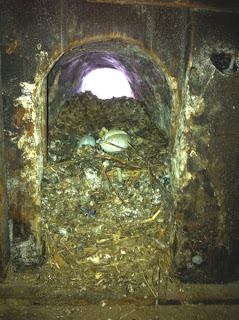 The four-sided dovecote located at the peak of the roof over the coach house is much larger with 48 openings.  This appears to be more of a “communal” dovecote with all of the openings accessing the interior of the dovecote, which has perches.  This dovecote is virtually impossible to access from the inside of the coach house due to the beams forming the structure of the gables, indicating that this one was not accessed by humans on a regular basis.  It is also unclear how the pigeons and doves were prevented from flying into the main attic space.
Although some questions remain about these structures, they are an interesting element in the design of the house.  Be sure to look at them closely on your next visit.
Posted by Glessner House Museum at 12:37 PM

Email ThisBlogThis!Share to TwitterShare to FacebookShare to Pinterest
Labels: dovecote, The Story of a House