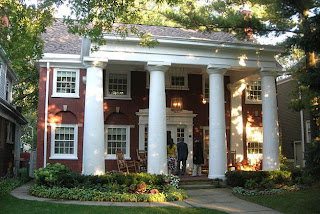 The historic Elmer C. Jensen house in ’s Old Irving Park neighborhood was the setting for this year’s event held honoring docents and volunteers for their service to during the past fiscal year ended June 30.  During the year, 60 volunteers contributed a total of 2,724.50 hours of service providing tours, working in the collections department, and assisting with various special projects.
The following thirteen individuals were honored for contributing the largest number of hours:
Dan Smaczny – 260.50 hours
Joan Stinton – 190.00 hours
Jackie Walker Dunscomb – 130.00 hours
Robert Herbst – 124.00 hours
Allan Vagner – 120.50 hours
John Kalmbach – 110.00 hours
Karen Oliver – 99.25 hours
Thressa Connor – 95.00 hours
Rebecca Williams – 80.75 hours
Robert Irving – 74.00 hours
Norman Cutler -  64.00 hours
Stephen Reginald – 53.50 hours
Marilyn Scott – 49.00 hours
Elmer C. Jensen worked as an architect in for 70 years, earning him the title of “The Dean of Chicago Architects.”  Born in in 1870, he came to work as an office boy for William LeBaron Jenney at the age of 14, one of his first jobs being to run drawings and messages between the office and the site of the , regarded as the first modern skyscraper.  He quit school to start work saying “I don’t feel that I can spare the time, I want to start right now.”
By age 18 he had designed several apartment buildings.  Known as an excellent renderer, at age 20 he won 2nd prize in the annual competition for the Chicago Architectural Sketch Club.
In 1893, he assisted with the design of a colossal theatre containing a great expanse of water for the presentation of a dramatic story of the discovery of by at the World’s Columbian Exposition – the building was never completed as the sponsor lacked sufficient funds to pay for its completion.
In 1895, at the age of 25, he won the gold medal for their annual design competition which that year had the theme “A Building for the Study of Botany.”
He was married in 1900 to Mary Nagle.  In 1905 he was made a full partner in the firm of Jenney, Mundie & Jensen.  In that same year, he completed his home on North Lowell Avenue in what is now Old Irving Park, the most noticeable feature being the massive portico featuring four 18-foot high concrete over brick columns.  Two years later he designed the Irving Park Presbyterian Church a few blocks away, a combination of Gothic Revival and Arts and Crafts designs.
In 1909, he moved to a Colonial Revival style two-flat he designed on West Logan Boulevard.
One of the projects of which he was the most proud was to replace the floating foundation under the Fair Store at State and in 1923 – a massive engineering project completed without ever interrupting business in the store.  He was also proud of his design of the current Union League Clubhouse (1925) including the 20th floor swimming pool with a capacity of 50,000 gallons.
He became very active in various professional organizations and held leadership positions in the Chicago Building Congress, the Illinois Society of Architects, and the Chicago Chapter of the American Institute of Architects.
He had a deep concern for the poor and did much to help lead the effort to clear slum areas and replace them with affordable and respectable housing.  He was involved in the design of the Jane Addams Homes along Loomis Street (1935-1938), today still considered among the best designs for public housing.
He helped in the design of or was solely responsible for the  design of 29 skyscrapers in the as well as 26 banks including:
Leiter II Building
105 W.
at 39 S. LaSalle (his architectural offices were located here for 55 years)
Equitable Building
In the Prairie Avenue neighborhood he designed the Locomobile building at 2000 S. Michigan Avenue (1909) and the Rogers and Company building at 2001 S. Calumet Avenue (1913), both of which have since been converted to residential lofts.
He died at his summer home in South Haven , and was interred at .
He was devoted to Jenney and actively promoted his role in the development of the modern skyscraper.  Of the he said “My personal opinion is that while he was fully conscious that his ideas and buildings were developing new forms, his main purpose was to create structural features which increased the effective floor areas and made it possible to secure more daylight within the buildings.  I do not recollect that he made any remarks about creating new forms although he did remark that skeleton construction would bring about a revolution in the design of office buildings.”
He was also interested in preserving the records of the architectural profession in and launched the Architect’s Microfilm Project at the Burnham Library at the Art Institute of Chicago, where many valuable and irreplaceable drawings and records of architects are now housed.
His name remains a part of the firm that carries on his work today – Jensen and Halstead.
(Photo by John Waters)
Posted by Glessner House Museum at 11:57 AM