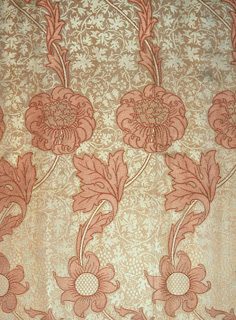 William Morris textiles and wallpapers were used extensively by the Glessners for their new home when it was completed in 1887.  Although the original wallpaper in the parlor was not a Morris design, the Glessners did select a Morris textile for the window draperies and the portieres in the doorway leading to the dining room.  In addition, two pairs of exceptional hand-embroidered Morris portieres were selected for use on the twin doorways leading to the main hall.  (These portieres were donated to the Art Institute in 1918 by the Glessners and were not reproduced in the current restoration).
The Kennet design chosen for the draperies was a popular Morris design registered by the company in October 1883.  Available in a number of colorways in printed cotton, velveteen, or woven silk, the design consisted of a large 27.5” repeat of two types of flowers with distinctive foliage vining upwards on the fabric.  The textile for the parlor, produced by Morris & Company at their Merton Abbey Works, was executed in tones of coral and light pink, which coordinated beautifully with the Italian Sienna marble on the fireplace.  It was a silk, satin weave with self-patterning ground wefts bound in twill interlacing.  Silk brush fringe and large tiebacks completed the ensemble at the windows.  Historic photos show that the draperies were always pulled open, with the only other covering on the windows being simple linen shades.  This would be consistent with ’s idea for the house whereby the main rooms, including the parlor, faced south to capture abundant natural light and bring it into these spaces.
In 1971, the Glessners’ granddaughter Martha Batchelder donated a large fragment of one of the drapery panels (shown above) to the Art Institute of Chicago where it was displayed as recently as 2010 during the Apostles of Beauty exhibition.  This fragment was used to correctly identify the five colors used to create the textile.  The design itself was created digitally and printed on a sateen fabric to closely replicate the sheen of the original.  Production was executed by Trustworth Studios of Plymouth Massachusetts, the same company that produced the digital version of the Morris & Company Blossom wallpaper installed in Fanny Glessner’s bedroom in August 2009.
Work is rapidly being completed in the parlor.  This week the wall covering is being installed and the drapes are being assembled.  The formal dedication of the restored parlor will take place on Friday October 14 beginning with a reception at 6:00pm, followed by the dedication and a talk by architect/historian John Waters on William Pretyman, designer of the wall covering.  For reservations, call .
Posted by Glessner House Museum at 10:04 PM