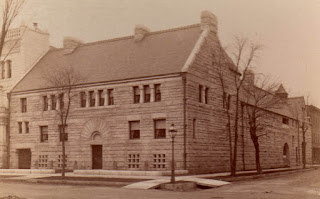 On  will hold a one-day symposium entitled “Glessner House at 125: ’s Urban Residential Masterpiece Reconsidered.”  The event brings together seven scholars who will explore the architect H. H. Richardson, the interior decoration of the home, and its preservation in the mid-1960s.   The symposium will be preceded by an opening reception on Friday November 9 at which Richardson scholar Ken Breisch will present a lecture entitled “Situating the Glessner House: Late Richardson and the Romanesque Revival in the American West.”  An optional walking tour of the Prairie Avenue Historic District will be given by Executive Director Bill Tyre on Sunday November 11.  The symposium brochure and registration form may be downloaded at http://www.glessnerhouse.org/Events.htm.

- Keynote Speaker
JAMES F. O’GORMAN
Professor Emeritus, Wellesley College
“Herkomer’s Portrait of Richardson in Iconographical Context”
A look at the place of the likeness in the history of portraying nineteenth-century American architects.  A large heliotype copy of the Herkomer portrait displayed in the main hall is one of the few items to remain in the Glessner House continuously since the late 1880s.

MARY ALICE MOLLOY
Architectural Historian
“Richardson’s Web: A Client’s Assessment of the Architect’s Home and Studio”
An analysis of how Richardson used his home and office to encourage his clients to accept his ideas for their projects, based on a first hand account of John and Frances Glessners’ visits with the architect during the planning phase for their home on Prairie Avenue.

KEVIN HARRINGTON
Professor Emeritus of Architectural History, Illinois Institute of Technology
“Mies Visits Glessner House: What Was He Thinking?”
When Ludwig Mies van der Rohe, an influential architect, first arrived in American in 1938, he considered conducting his new architecture curriculum in Chicago at the influential Glessner House.  This examination provides valuable insight into the relationship between two seemingly different architects.

ELAINE HARRINGTON
Former Curator, Glessner House Museum
“Colors, Patterns, and Seasons in the Glessner House”
The Glessners and Richardson used many themes in this significant work of architecture and decorative art, blending them into a cohesive fabric responding to the life within.  The colors and patterns of design and life that resulted from the weaving together of these themes created this outstanding seasonal urban home.

ROLF ACHILLES
Curator, Smith Museum of Stained Glass and Adjunct Professor, School of the Art Institute
“Neugotik (New Gothic): A Springboard to Modern in American Furniture and Interior Design”
An examination of the Glessners’ evolving tastes during the 1870s and 1880s, from the new Gothic masterpieces designed for them by Isaac Scott, to later furniture by Charles Coolidge and Francis Bacon specifically commissioned for their new home on Prairie Avenue.

2:15pm
MONICA OBNISKI
Assistant Curator of American Decorative Arts, Art Institute of Chicago
“The Impact of William Morris on the Arts and Crafts Movement in Chicago”
This talk will locate several examples of William Morris’s influence - through his ideals and his designs - in Chicago at the turn of the 20th century, including Glessner House, one of the earliest.