The Glessners and their servants 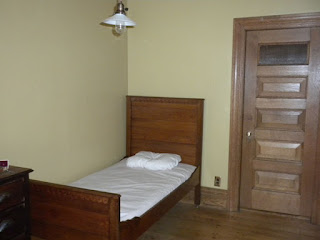 Over the weekend of , participated in Open House Chicago, a city-wide event sponsored by the Chicago Architecture Foundation during which more than 150 sites around opened their doors for free to visitors.  The museum had nearly 1,700 visitors who were treated to a special behind-the-scenes tour of the servants’ wing of the house.

When H. H. Richardson designed the house in 1885-1886, he was designing for a family of four and a live-in staff of eight.  He carefully segregated the servants’ areas and those used by the family and their guests.  Rooms for male servants were placed above the coach house; those for female servants were located above the kitchen wing.  The butler’s apartment was separated from the rest and was located at the northeast corner of the third floor.  The male and female servants had separate entrances facing and there was no connection whatsoever between the male and female servants’ wings inside the house.  The servants had a separate address from the family which was .

The Open House Chicago tour included the following stops within the house:

-COACH HOUSE
The coach house originally consisted of two rooms – the stable and the carriage house.  The stable had six stalls for horses, and the carriage house could accommodate an equal number of carriages, used by both family and guests.  Both sections of the coach house had built in systems allowing for the efficient washing of horses and carriages.  The spaces were quite modern, with poured concrete floors and glazed brick on the walls.  In 1906, the Glessners converted to automobiles and the wall between the stables and carriage house was removed, providing the configuration found today.  The room is now used for programs and events and as a rental venue.

-MALE SERVANTS’ STAIRCASE
This staircase features a door facing with six distinctive panes of blown glass that retain the stub that forms when the glass is made.  At the first floor landing, a modern door marks the location of the original half-door through which the iceman could place blocks of ice into the cold closet, a.k.a. the icebox.

-HAYLOFT
The hayloft is accessed from the male servants’ stairway and has two second-storey hayloft doors facing and the alley through which hay and feed could be brought into the space.  Large bins (no longer extant) held feed, and two doors in the floor could be opened to drop feed and hay down to the horses below.  These doors are still visible in the ceiling of the coach house.

-DOVECOTES
Two dovecotes located at the north end of the hayloft could accommodate nearly 60 doves, and the eggs would be harvested and used by the family.  The smaller dovecote, built into the gable facing , has a staircase for access and individual sliding doors for each nesting niche.

-MALE SERVANTS’ ROOMS
There are three male servant rooms and a shared bathroom to the east of the hayloft, originally separated by a long hallway.  Each room had a window facing east into the courtyard for light and fresh air.  An additional room, known as the “living room” was a gathering space for the male staff, and included a large closet where all three male staff would keep their uniforms and other clothes. 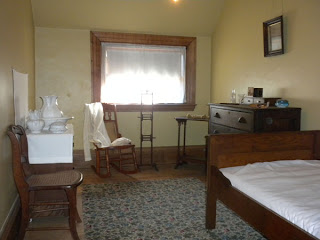 -FEMALE SERVANTS’ ROOMS
Four individual bedrooms for female servants are located along a long hallway running east-west above the kitchen wing.  The female servants shared a bathroom and a small porch facing onto .  Female staff would include the cook, waitress, parlor maid (for cleaning), and the ladies maid (who took care of the clothes of the female members of the family).  Additional staff, such as the laundress and seamstress would come and go on a daily basis and not live on-site.  The easternmost bedroom has been fully restored and contains furniture typical of what would have been found in the rooms.  It is interesting to note that the rooms are trimmed in quarter sawn oak, the same wood used in the formal rooms of the house.

-FEMALE SERVANTS’ STAIRCASES
A staircase leads from the second floor bedrooms to the hallway off of the kitchen.  In that same hallway, a door leads to the outside – this would have been the female servants’ entrance.  It is set within the imposing granite arch on – quite a beautiful entrance for the staff! 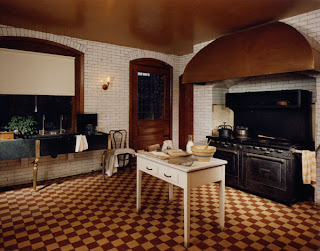 -KITCHEN
The kitchen wing consists of five rooms – the main kitchen work area, the butler’s pantry, the servants’ dining room, the dry pantry, and the cold closet (or icebox) referenced earlier.  The kitchen was a modern space in that it featured encaustic tiles floors and glazed brick walls, all easy to keep clean. 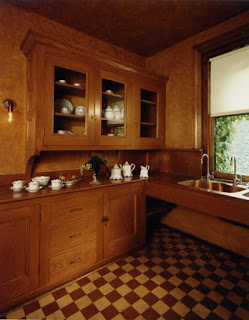 The butler’s pantry was used for the storage of china and crystal and is immediately adjacent to the dining room.  A swinging door separates this pantry from the dining room and would have always been kept closed except when setting the table or cleaning up after a meal.  The butler’s pantry features a copper sink – the soft metal was appropriate in that it helped to prevent breakage or damage to the china and crystal if it was dropped during washing.  The main work area of the kitchen features a sink made of soapstone, much more durable for the heavy washing that would occur here.  To the right of the sink is a doorway leading to the courtyard, allowing for the delivery of food directly into the kitchen space.

The servants’ dining room would have contained a large table where the staff would gather for daily meals.  Staff would typically have their dinner around each day, so that all efforts could be focused on the final preparations of the dinner for the family and their guests.  The dry pantry would be used for food storage, including huge quantities of foods grown and preserved at the Glessners’ summer estate The Rocks in .  Frances Glessner’s famous honey would be kept here as well.  The cold closet featured marble shelves, which would retain the cold, and a narrow window which could be opened during the winter to keep foods and ice cold. 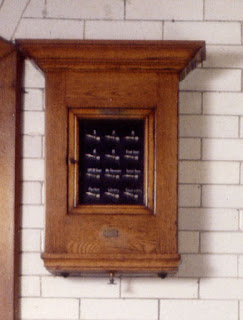 An annunciator in the kitchen allowed for staff to be called from anywhere in the house by family or guests.  When a button in one of the main rooms was pressed, the annunciator box would ring, and an arrow would point to the location where the call came from.  A servant would be dispatched and the box would be reset.

The operation of such a large household would have been impossible without a large live-in staff.  Interpreting these spaces for visitors provides a greater understanding of the family, the house, and the time period in which they lived.  Fortunately for the museum, Frances Glessner meticulously maintained a journal in which she recorded the name of each servant as they were hired, along with their pay and position, and the reason why they left service or were dismissed.  This is a rare and valuable record of the “forgotten” residents of .
Posted by Glessner House Museum at 4:58 PM