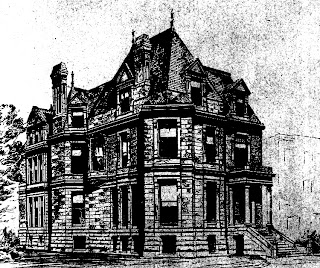 Over the weekend of October 27 and 28, 2012, will offer one of its most popular annual events – Shadows on the Street – haunted tours of ’s historic .  This tour explores the street known in the late 19th century as “Millionaire’s Row” or more popularly “the sunny street that held the sifted few.”  Prairie Avenue, between 16th and 22nd streets, was the most exclusive residential street in , if not the country, during the last decades of the 1800s.  ’s wealthiest citizens, including Marshall Field, meatpacker Philip Armour, and the “palace car prince” George Pullman lived there, along with more than 70 other millionaires – the business and social leaders of the city.

In spite of the wealth and prosperity of the street, the neighborhood fell into serious decline in the first decades of the 20th century.  Industry encroached on the west, increased train traffic on the Illinois Central tracks created a nuisance on the east, a growing African-American community developed to the south, and then there was the Levee, or Red Light, district which formed around and .  Families moved to other parts of the city, and their elegant homes were either torn down or converted into offices or boarding houses.  Eventually all but seven of the 90 mansions that lined the street were razed.

There are numerous stories of untimely endings, and even today, stories of unexplained sightings and sounds lead many to believe that the spirits of some of the residents of the street still remain.  Herewith are a couple of the stories which participants in the Shadows tour will hear this coming weekend. 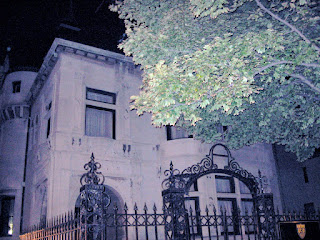 The William W. Kimball House
This house, located at , is an elegant Chateauesque style home, designed by Solon S. Beman and built for the piano and organ manufacturer between 1890 and 1892.  It was one of the most beautiful houses ever built in , and even today, is noted for its beautiful carved stonework and stately turrets and dormers.  But ever since 1921, when the widowed Evaline Kimball passed away, there have been persistent rumors that the large windows on the north side of the house shake and rattle violently, even when there is no storm or other disturbance outside.  No satisfactory cause has ever been found to explain the odd occurrence, but some have suggested that it may be the ghost of Mrs. Kimball.  She was known for her extraordinary collection of Old Master paintings that lined the walls of the impressive two-storey entry hall.   The paintings are now on display at the Art Institute of Chicago.  In her last years, Mrs. Kimball was known to suffer from dementia, and could be seen standing in her hall, elegantly dressed and welcoming her guests.  But there was no one around her.  Could it be that the spirit of Evaline Kimball has returned to the house looking for her Old Master paintings and is upset that they are no where to be found?  (The house also served as the setting for the 1996 film Primal Fear starring Richard Gere, Edward Norton, and Laura Linney). 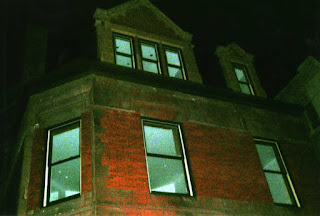 The Marshall Field Jr. House
Perhaps no house on the street has attracted more attention than this home, which stands at .  Now comfortably renovated into six luxury condominium units, this house endured decades of use as a hospital and nursing home, and more than a quarter of a century of sitting largely empty and deteriorating.  But the story of the untimely death of Marshall Field Jr. in 1905 is what has kept the house in the public eye.  The official story is that Field was in the library of the house cleaning a rifle for a hunting trip when he accidentally shot himself.  He was rushed to Mercy Hospital where he died five days later, just 38 years old, leaving a widow and three young children.  The family never lived in the house again.  However, stories have persisted to this day that the story of Field’s last days was not so simple.  The most popular story is that he was in fact shot at the Everleigh Club, the most exclusive brothel in the city (conveniently located just a few blocks to the west on ).  After being shot, he was brought back to the house and then taken to the hospital to make it appear the shooting had taken place at home.  Ironically, the Everleigh sisters who operated the Club said the story was circulated by their competitors to discredit THEM and get them shut down by the city.  There were also stories that Field was despondent and attempted suicide.  Regardless, Field’s father, owner of the famous department store, was the wealthiest man in town, and the largest advertiser, so all the newspapers printed the “official” story.  The real story may never be known, and the rumors persist more than a century after Field died.

Shadows on the Street tours will be offered on Saturday October 27 and Sunday October 28 at and each evening.  Tours are $10 per person and reservations may be made by calling .
Posted by Glessner House Museum at 3:41 PM