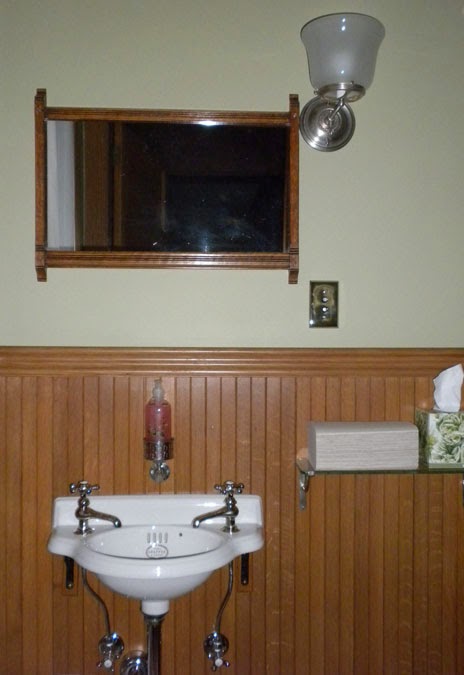 The museum officially reopened the guest bathroom on Thursday April 3, 2014 after six weeks of work, and months more of planning.  It had last been remodeled in the early 1970s when large Formica countertops and chrome bar lights with vanity bulbs were all the rage.  Located off the main hall beneath the landing of the main stairs, it measures just 4 by 5-1/4 feet, but involved the work of numerous craftsmen to restore as closely as possible the original appearance of the room, while still making it fully functional for our visitors.

Work began last fall when research was undertaken to determine the original materials and finishes used in the room, since there are no known historic photographs of the space.  Original blueprints and building specifications provided valuable information verifying the use of quartersawn oak for the wainscoting and trim, and Knoxville marble for the base under the toilet.

Although the original high tank for the toilet remained in place, a 1966 photograph of an upstairs bathroom showed that the Glessners at some point switched to oak low tank models in at least some of the bathrooms.  That photograph also showed the original wood enclosure for the high tank. 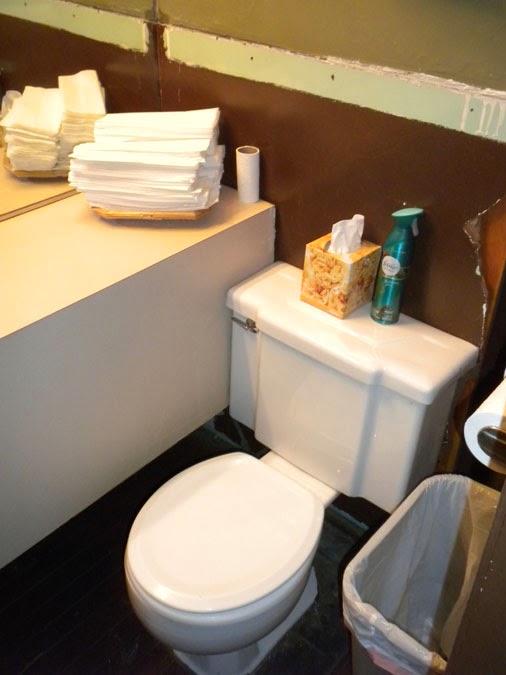 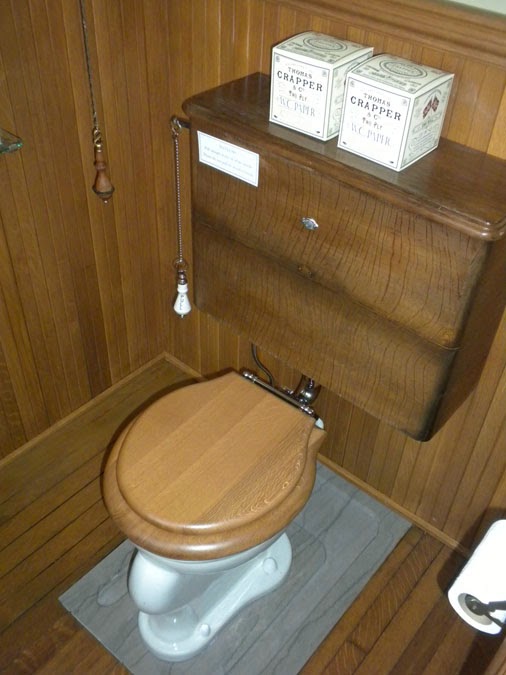 Toilet before (top) and after (bottom)

Once all the information was in place, the next step was to locate appropriate pieces.  Bathroom Machineries, a company in California which specializes in vintage and reproduction bathroom fixtures, proved to be the perfect source for several of the pieces.  This included the stunning quartersawn oak low tank (complete with seat bumper and side pull chain), circa 1916 toilet bowl (a rare piece 2 inches higher than normal bowls), and reproduction “cloak room” sink, as well as faucets and valves. 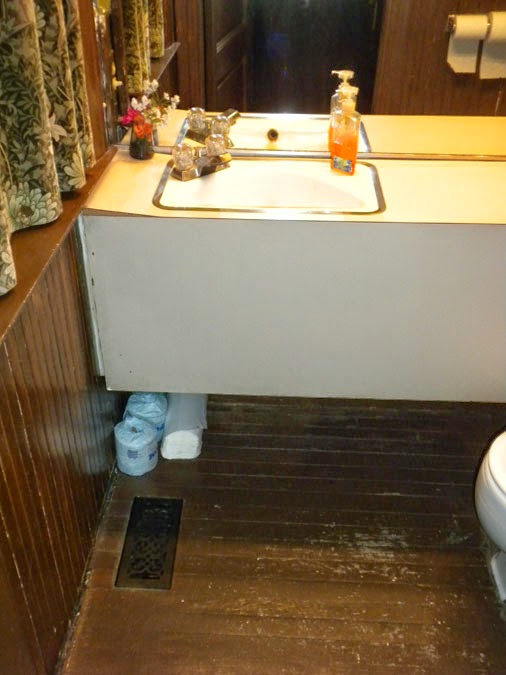 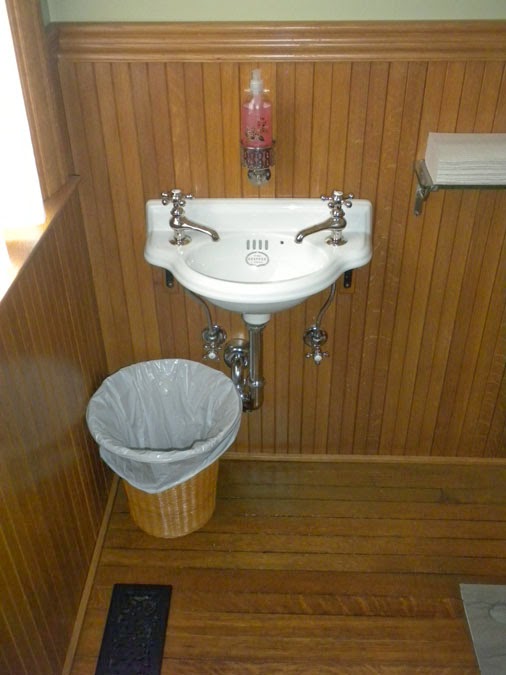 Sink before (top) and after (bottom)

The sink is manufactured by Thomas Crapper & Co. Ltd. of England.  This company dates back to the 1860s when Crapper set up business as a plumber.  In time, he became a well-respected manufacturer and earned several royal warrants.   It is popularly held that Crapper was the inventor of the toilet (or W.C. as it is known in England) and that the term “crap” is derived from his name, but neither is true, although the term “crapper” for a toilet does have a more direct connection.  For more information on this history, visit the company website, http://www.thomas-crapper.com/history02.asp. 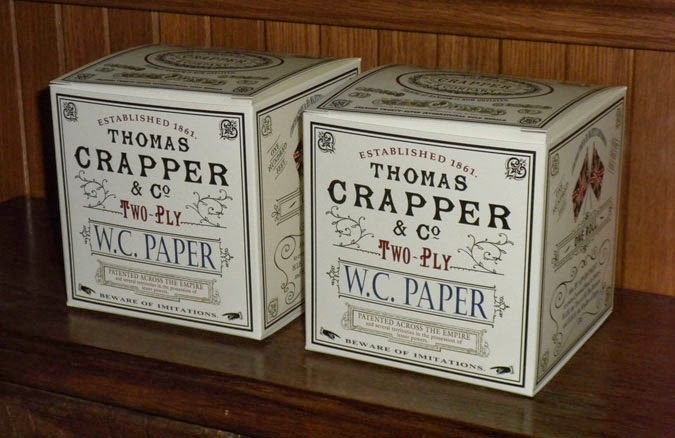 The company logo is prominently displayed in the bowl of the sink as well as on the two reproduction “W.C. paper” boxes sitting atop the tank of the toilet (used to store spare rolls). 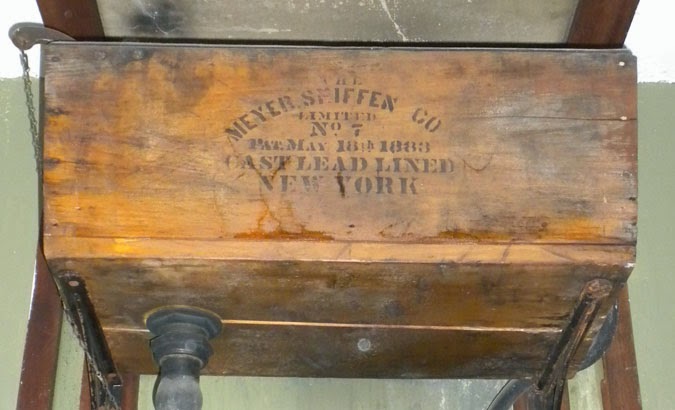 High tank prior to construction of new enclosure 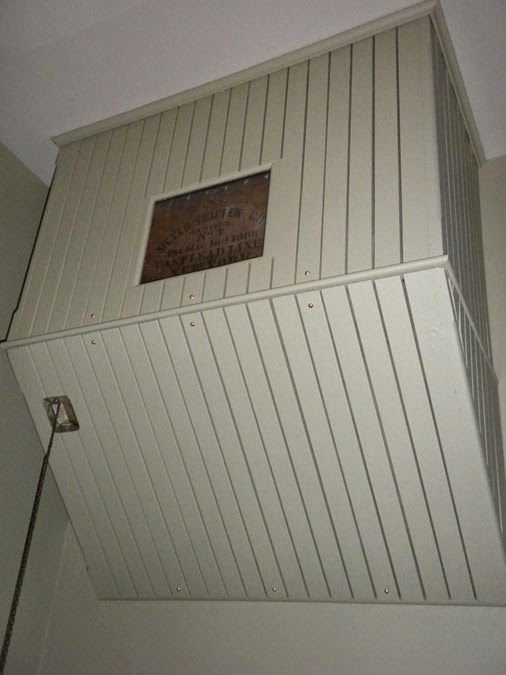 The original high tank was preserved and is once again encased in a wood enclosure identical to what would have been in the room when the house was first built.  One small change was the insertion of a small window on the front of the tank, so that the logo of the manufacturer, Meyer Sniffen Co., could still be seen.  (Meyer Sniffen fixtures were used throughout the house when first constructed). 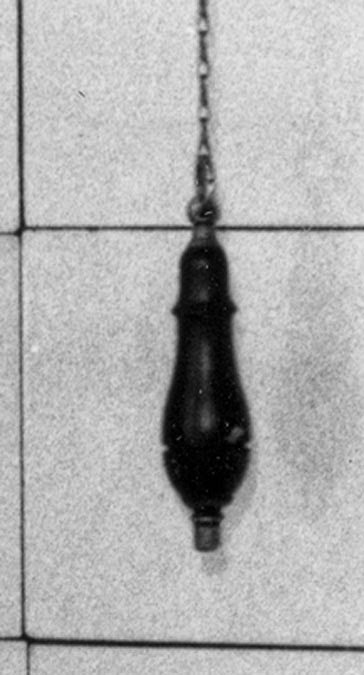 Top - original oak pull used on the toilet in the master bathroom
(the original rubber ring had been lost by the time of the photo, 1948)
Bottom - vintage oak pull in use in the restored guest bathroom

The original pull chain was still in place and a vintage oak pull was located in England that matched those used by the Glessners as seen in the two images above.  (The black band around the restored pull is a rubber ring to prevent damage to the wall when the pull chain swings and hits the wood). 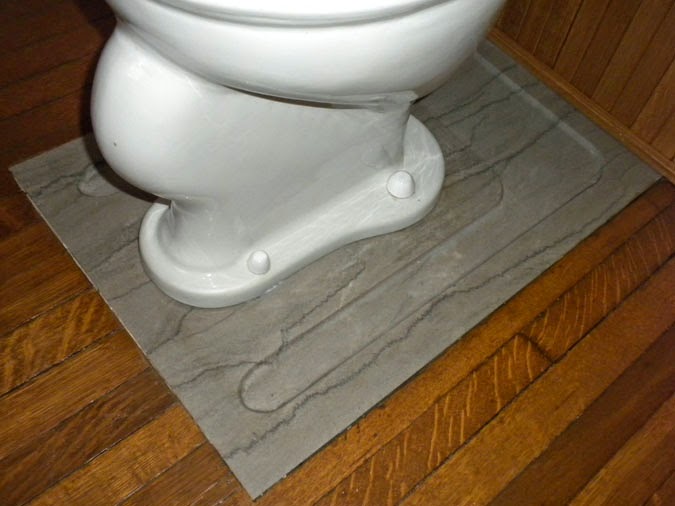 The 1970s toilet had been set atop a one inch depression in the floor which always looked most unsightly.  Research uncovered the specifications for the original marble base which had a small depression cut into the top around the toilet bowl to collect water runoff or “sweat” to protect the surrounding oak floor.  Using original marble bases still in place at the Driehaus Museum as a guide, a new piece of marble was cut and set into the floor.

Most of the original oak wood wainscoting and top trim was missing and has been replicated exactly based on surviving pieces.  Original casing and jambs around the window and door, as well as the door itself, have been stripped of numerous layers of paint.  The floor, which had also been painted, proved to be a special challenge and it required extensive bleaching and sanding to remove decades of water stains. 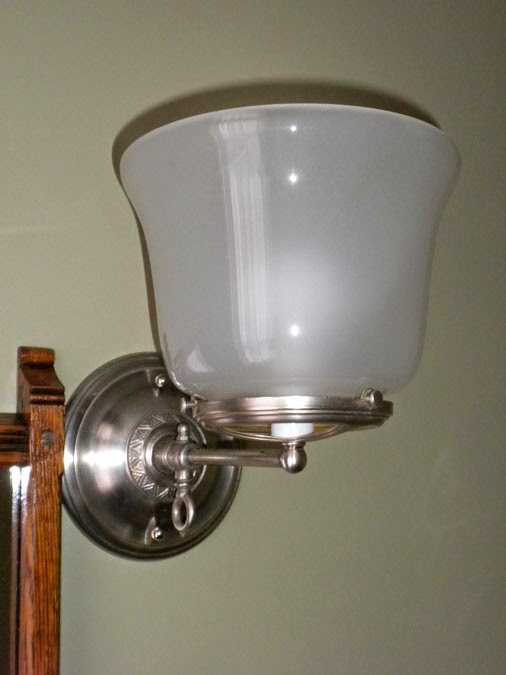 The location of the original stiff-arm wall sconce was identified, and a vintage fixture was restored and silver-plated, just as the original would have been. 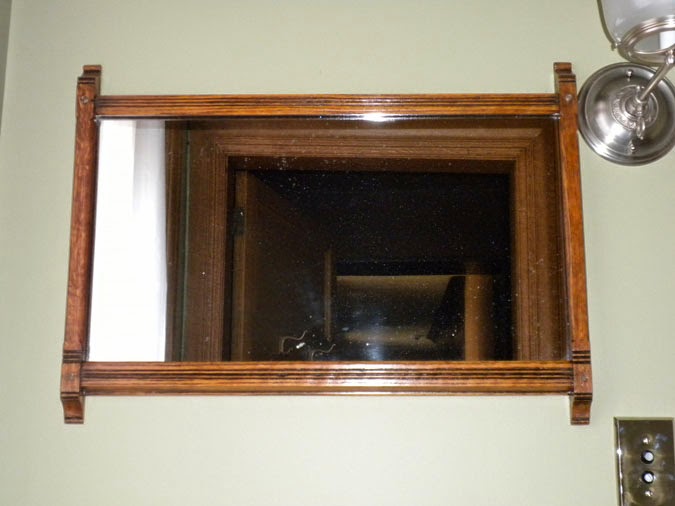 Next to the sconce, the original mirror has been put back in place.  This was an exciting find.  Although the original mirror was in the museum collection, it was not known that the mirror had hung in this room.  When the large wall mirror, installed in the 1970s, was removed during renovation, a paint outline on the wall verified that the mirror had in fact been located in this bathroom.

John Glessner wrote that one of his few regrets about the design of the house was using silver-plated fixtures in the bathroom, due to the constant need for polishing.  This was at the recommendation of H. H. Richardson, who felt nickel was a cheap substitute for silver-plate.  Not wishing to burden our current staff with the job of polishing the bathroom fixtures all the time, we opted for period polished nickel pieces. 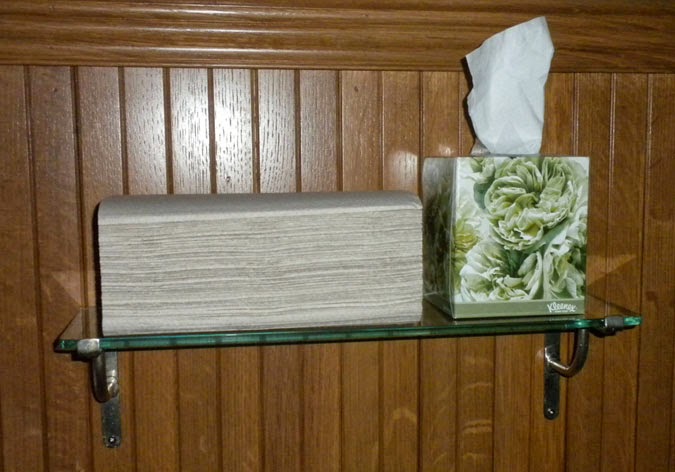 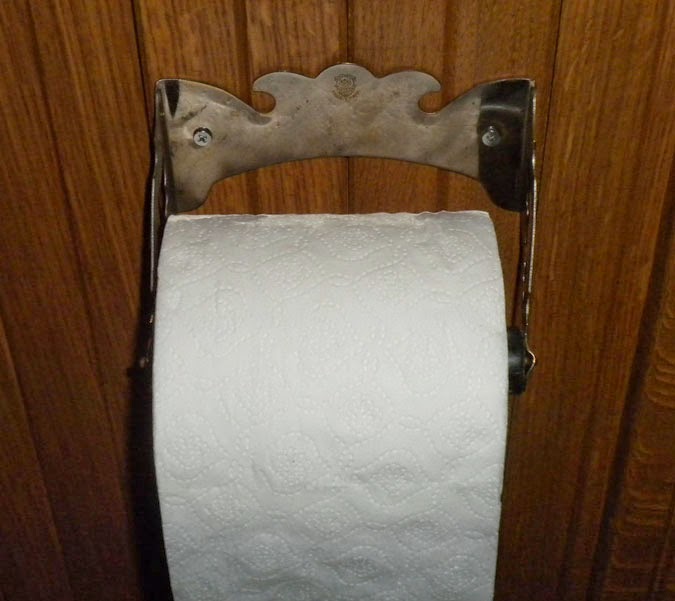 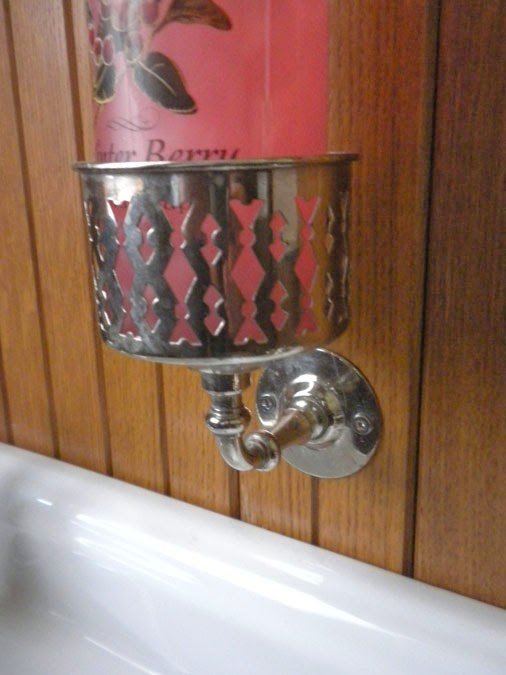 These include an 18” glass shelf supported on nickel-plated brass brackets patented by The Brasscrafters Co. in 1906, and a nickel toilet tissue holder and cup holder (repurposed to hold a bottle of hand soap), both Wilwear, produced by the Novelty Manufacturing Company of Waterbury, Conn. in the early 1900s.

After extensive replastering of the ceiling and upper half of the wall, the room was repainted using the original colors – a very light green on the ceiling and a medium olive green on the walls and high tank enclosure.  A simple curtain, made from an historically appropriate white striped dimity, covers the window. 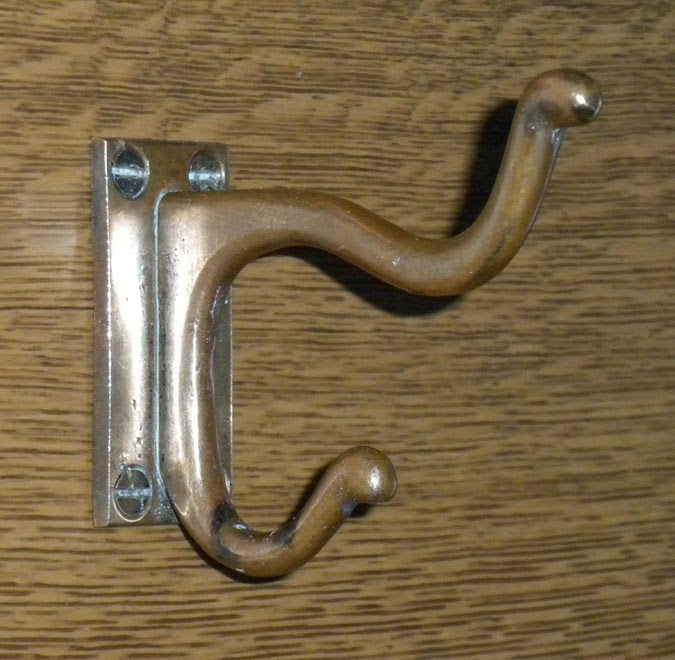 A final touch was the installation of two hooks on the door.  The bronze hooks are original to the house and were removed from a female servant’s closet, stripped and polished.

This project, funded by a generous anonymous gift to our 125th anniversary fund, has resulted in the complete transformation of one of our least impressive spaces in the museum into a true showpiece.  As the only restored bathroom in the house, it provides visitors with an accurate view of how these rooms appeared at the turn of the 20th century.
Posted by Glessner House Museum at 4:57 PM