Knight, Death and the Devil 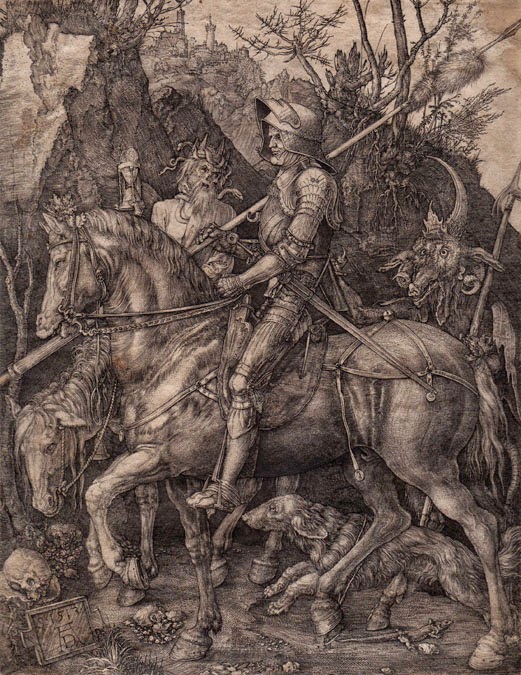 Glessner House Museum features a large collection of engravings collected by John and Frances Glessner during the last quarter of the 19th century.  One of these, Albrecht Dürer’s Knight, Death and the Devil, was recently put on permanent display as part of the reopening of the restored corner guestroom on April 9, 2014.  Donated to the museum by a great-grandson of the Glessners in 2010, this is the first time the piece has been on display in the house since the death of John Glessner in 1936.

Knight, Death and the Devil is one of the three “master prints” of Albrecht Dürer, a gifted and versatile German artist of the Renaissance period.  Executed in 1513, and titled simply the Reuter (Rider) by Dürer, the print depicts an armored Christian knight riding through a gorge with a pig-snouted devil behind and the figure of death holding an hourglass to the side. 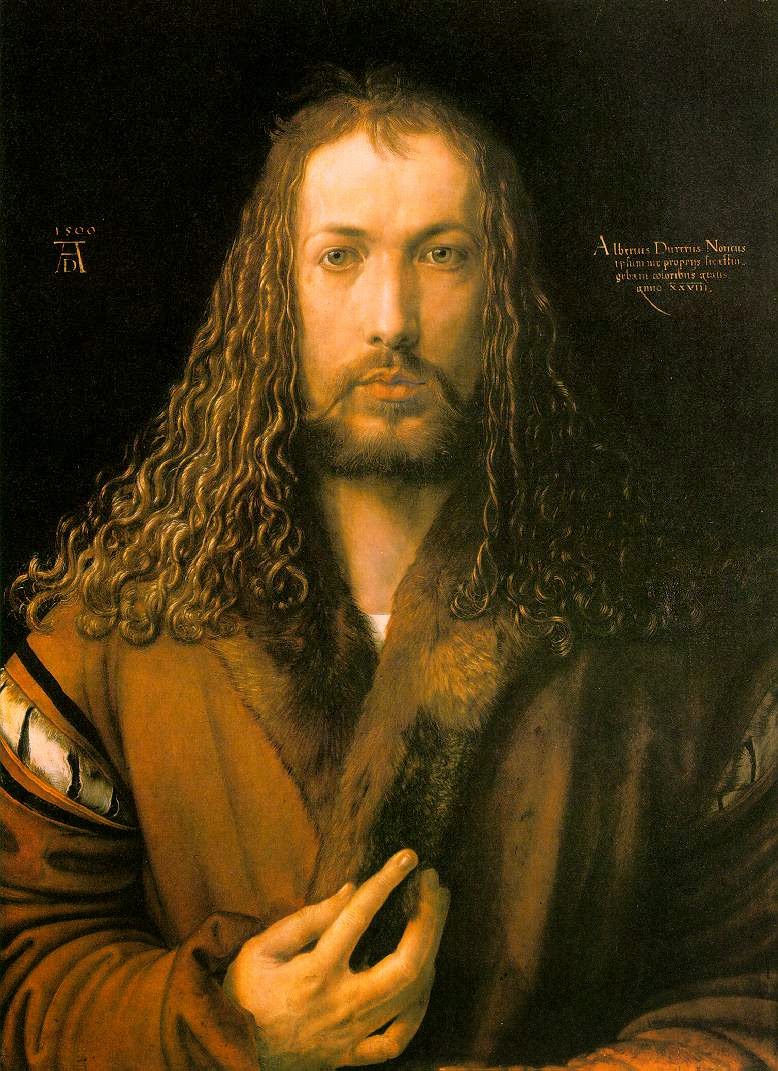 Albrecht Dürer was born in 1471 in Nuremberg, one of Europe’s most prominent artistic and commercial centers at the time.  A versatile artist, he was proficient as a painter, draftsman, and writer, but is most widely regarded for his impact on the medium of printmaking.  At an early age, he apprenticed with his father, a goldsmith, and with a local painter Michael Wolgemut, whose shop produced woodcut illustrations for books and publications.  Dürer became familiar with, and greatly admired, the work of Martin Schongauer, also considered a master of printmaking.  (One of Schongauer’s prints, a depiction of John the Baptist made about 1490, is also on display in the Glessners’ corner guestroom).

Dürer truly revolutionized printmaking, making it an independent and well-respected art form.  His skills significantly expanded its tonal and dramatic range, as seen in the print on display at Glessner.  His two extended trips to Italy exposed him to the great works of the Italian Renaissance and the region’s classical heritage, and these important influences can be seen in his works.  He became the official court artist to Holy Roman Emperor Maximilian I and his successor Charles V. 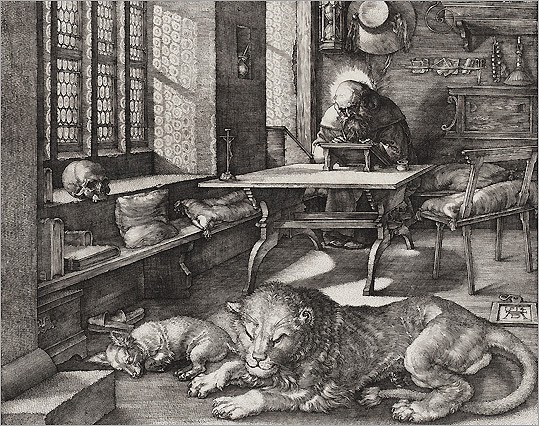 St. Jerome in His Study

In 1513 and 1514, Dürer completed a group of three images which have become known as his “Master Engravings.”  These include Knight, Death and the Devil, as well as Saint Jerome in His Study and Melencolia I.  These three were not specific commissions, but were intended more for collectors, and their technical virtuosity and depth of meaning were unmatched by any of his earlier works.  Dürer died in 1528. 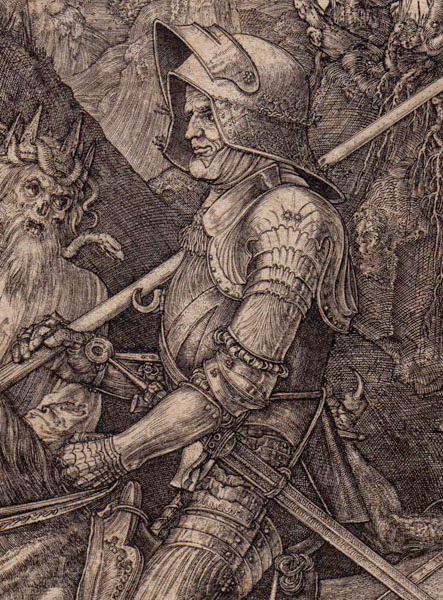 “ In order that you may not be deterred from the path of virtue because it seems rough and dreary . . . and because you must constantly fight three unfair enemies – the flesh, the devil, and the world – this third rule shall be proposed to you: all of those spooks and phantoms which come upon you as if you were in the very gorges of Hades must be deemed for naught after the example of Virgil’s Aeneas . . . Look not behind thee.”

A second possible inspiration for the work is the familiar passage from Psalm 23, “Yea, though I walk through the valley of the shadow of death, I will fear no evil.” 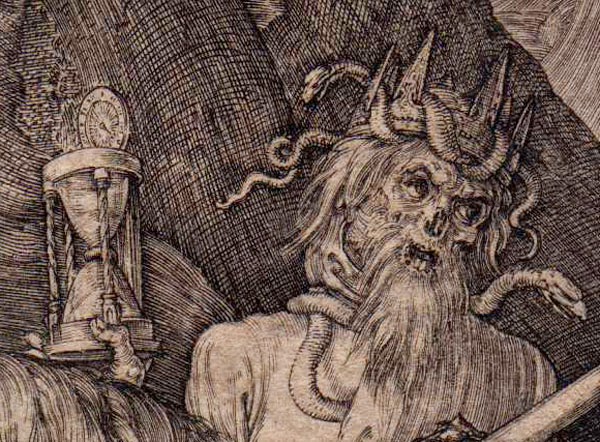 In this print, the knight rides past Death who is depicted on a pale horse, holding out an hourglass to remind the knight of the brevity of life.  The face of Death is shown with neither nose nor lips, and snakes surround his neck and crown. 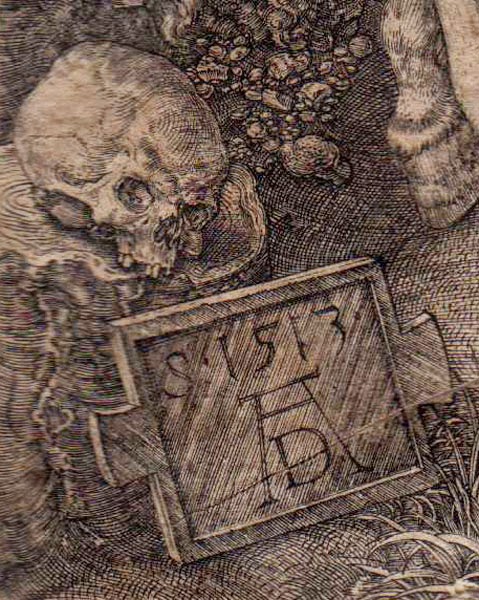 Another symbol of death, a skull, appears in the bottom left-hand corner of the print, directly above a plaque inscribed S. 1513 AD (in the year of grace 1513). 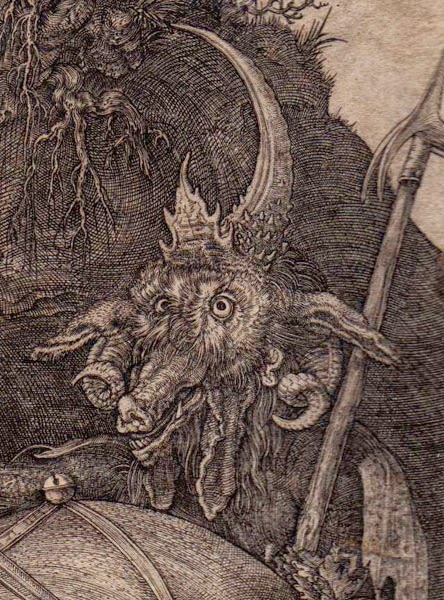 The pig-snouted figure of the devil behind the knight features rams horns at the sides and a single large curving horn protruding from the top of his head.  Amidst this dark and complex Nordic gorge, the knight, modeled on the traditional heroic equestrian portraits that Dürer would have seen in Italy, is undistracted and true to his mission.  His apparent destination is a hilltop stronghold visible above the dark forest.

Impressions are held in several major galleries and museums, including the Museum of Modern Art in New York and the British Museum in London.  The posthumous impression in the Glessner collection, based on an analysis of the paper, is believed to have been made about 1600.  The Glessners purchased the piece from Frederick Keppel for $80.00 in November, 1880.  Keppel was an importer of rare engravings, with galleries in London and New York, and the primary supplier of engravings to the Glessners.