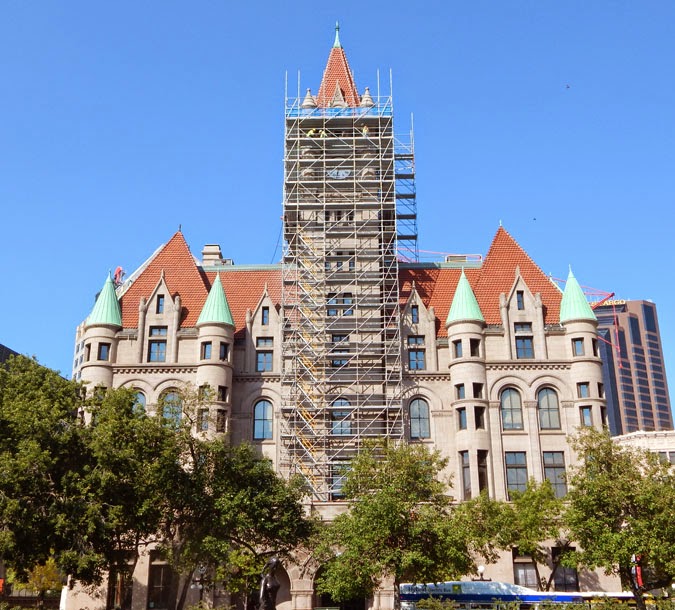 One of the most commanding buildings in St. Paul is the Landmark Center, located at 75 West 5th Street.  The design of the building was strongly influenced by H. H. Richardson’s Alleghany County Courthouse in Pittsburgh, Pennsylvania.  This structure, designed in 1892 by the Supervising Architect of the United States Treasury, is also very similar to other structures built for the federal government during the last years of the 19th century, when the Richardsonian Romanesque style was deemed most appropriate for large government buildings.  Completed in 1902 at a cost of $2.5 million, local architects involved in the massive project included James Knox Taylor and Edward P. Bassford, as well as Cass Gilbert, who went on to design the nearby Minnesota State Capitol. 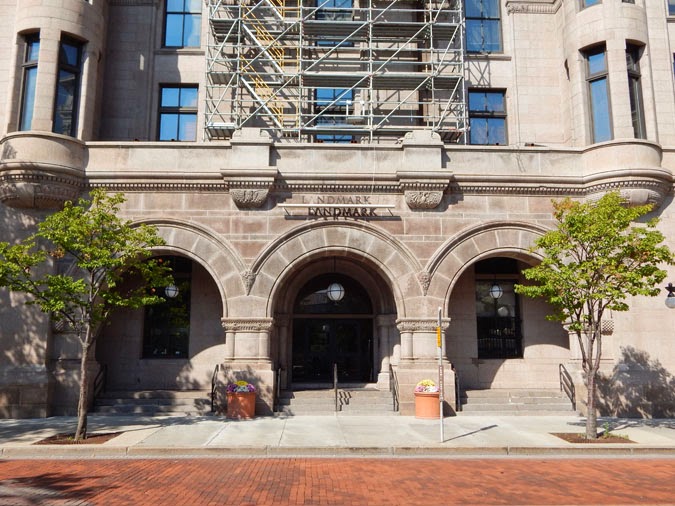 The building housed the federal courts, post office, and custom house, and eventually was home to all of the federal offices in the Upper Midwest.  By the late 1960s, the federal government moved its offices to a new building, and the old structure was threatened with demolition.  An ambitious public campaign was launched to save the building, and it was eventually deeded to Ramsey County.   It was reopened as the Landmark Center in 1978 after an extensive restoration, which earned it numerous awards, including a top national award from the American Institute of Architects in 1980.  Today, the building is managed and programmed by Minnesota Landmarks, and is home to many of the city’s arts and cultural non-profit organizations, which sponsor a diverse range of offerings. 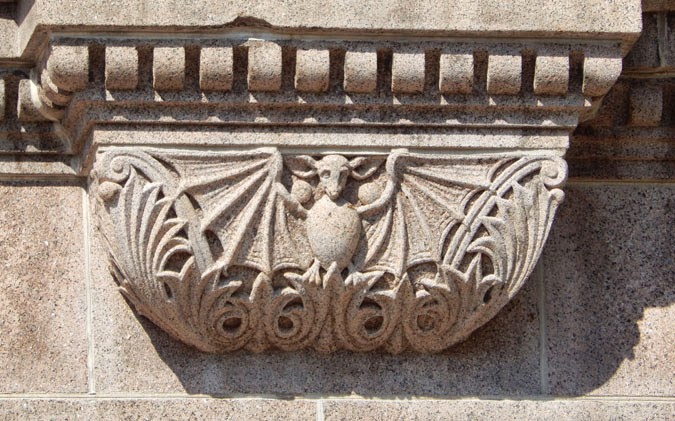 Several of the major interior rooms have been fully restored and are used as venues for public programming and for private events.  Visitors to the building are welcome to explore on their own and view these spectacular spaces. 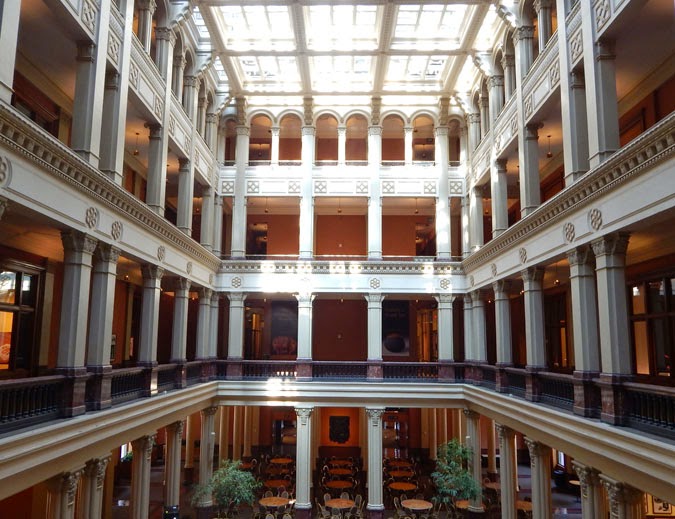 The building is wrapped around a huge four-story sky lit “cortile” or atrium.  The post office occupied the ground level of this space for more than 50 years, with a louver-paneled ceiling at the second-floor level.  Supervisors could watch the postal workers from a cat-walk above the ceiling. 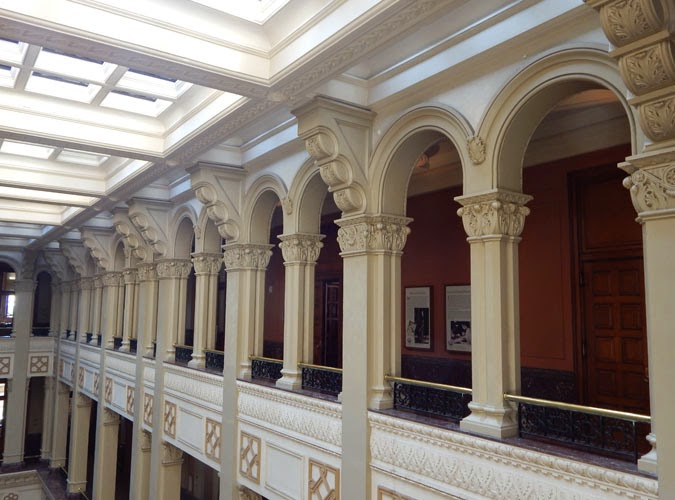 The ceiling and cat-walks were removed during the restoration, opening up the space and bathing the marble wainscoting, ornate columns, and tiled floor with light from the clear skylight above. 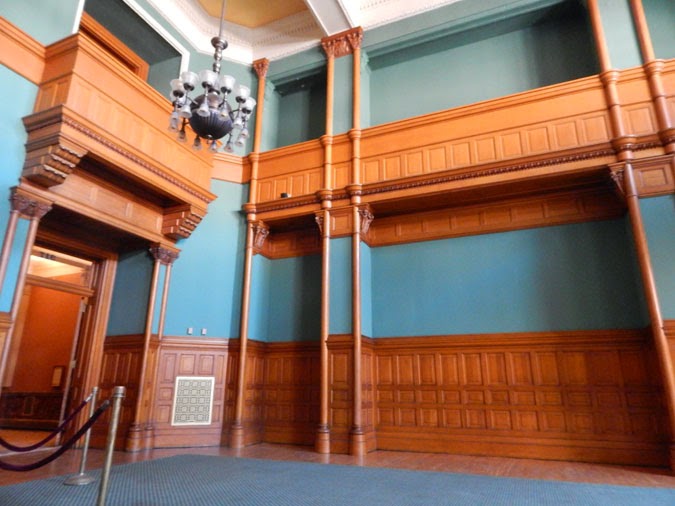 Four courtrooms were contained within the building, which served as the Federal Courts building for the Upper Midwest.  This courtroom was the largest of the four and was the site of many well-publicized gangster trials during the 1930s – including those of Ma Barker’s son “Doc,” and John Dillinger’s lady companion, Evelyn Frechette.  An interesting feature of the two-story space is the upper balconies, where FBI G-Men, armed with Thompson sub-machine guns, kept guard to ward off escape attempts or ambushes. 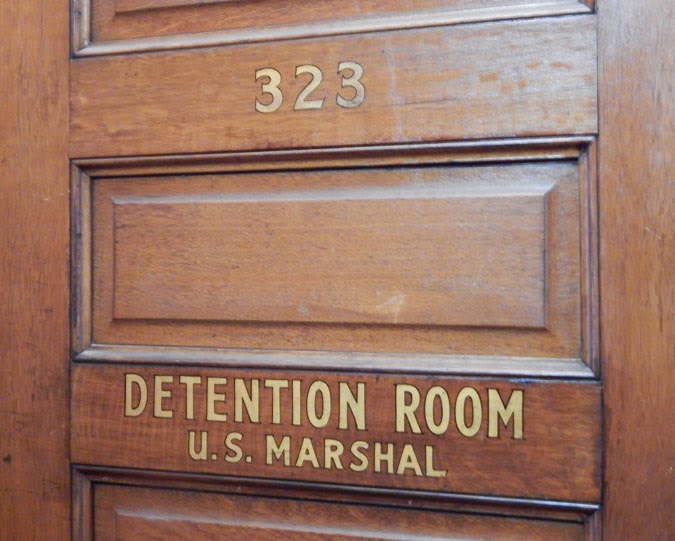 Just down the hall from the courtroom is the original “Detention Room,” now a private office. 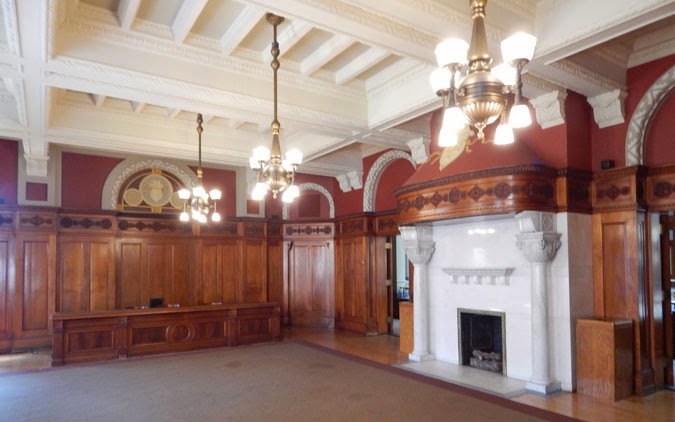 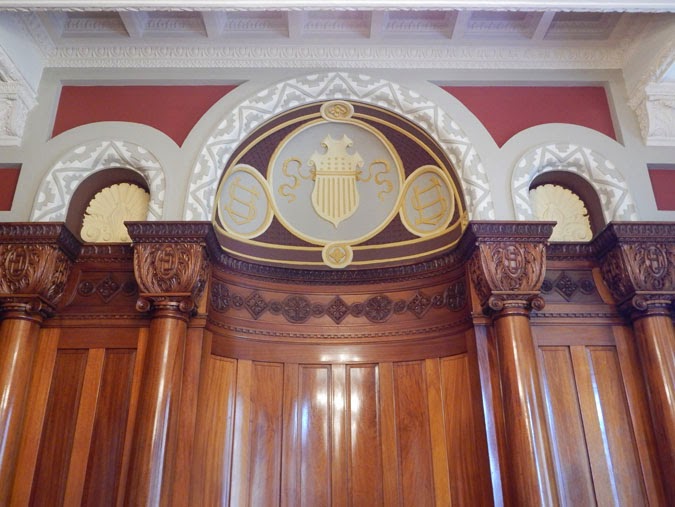 An interesting feature of this room is the elaborate ceiling with its molded crossbeams, discovered when the dropped ceiling and fluorescent lighting were removed during the restoration. 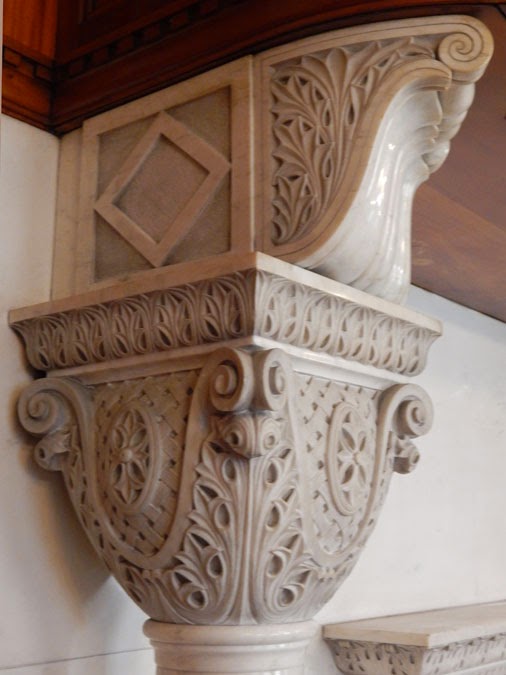 The Tudor style fireplace disguised the steam heating system used throughout the building.  The room is named in honor of Associate Justice Pierce Butler, a St. Paul native who was appointed to the U.S. Supreme Court in 1923. 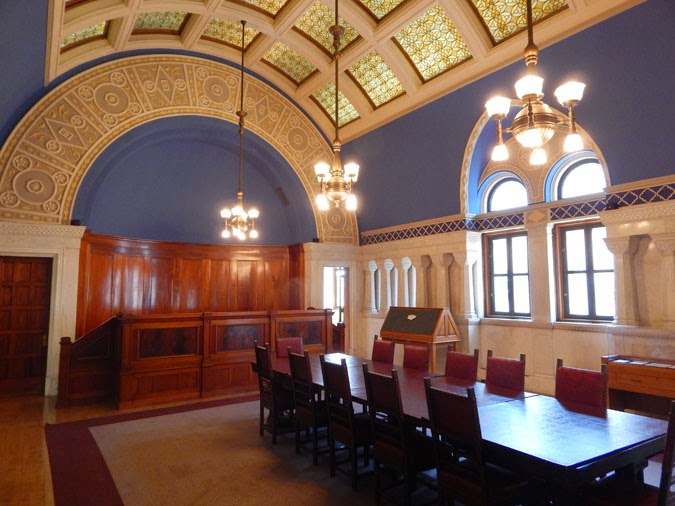 This courtroom was used as the Court of Appeals.  Notable features include the extensive use of white marble most notably for the windows, which are said to be based on Richardson’s Trinity Church in Boston. 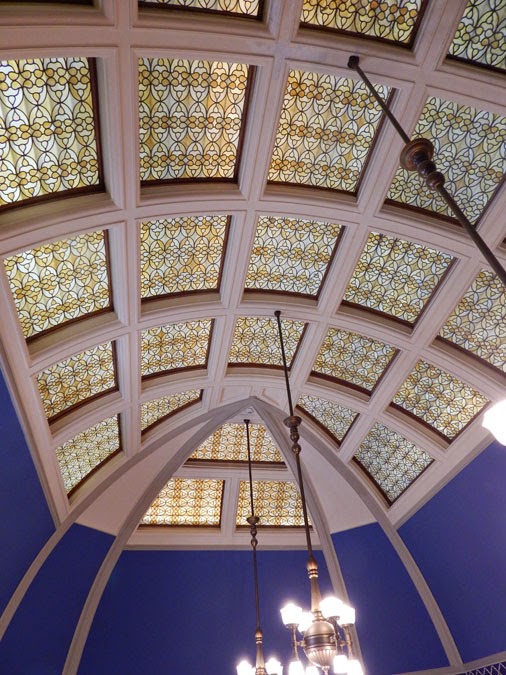 The huge stained glass skylight had been painted over in later years and was restored during the restoration.  The room is named for two generations of the Sanborn family who served as judges in this space. 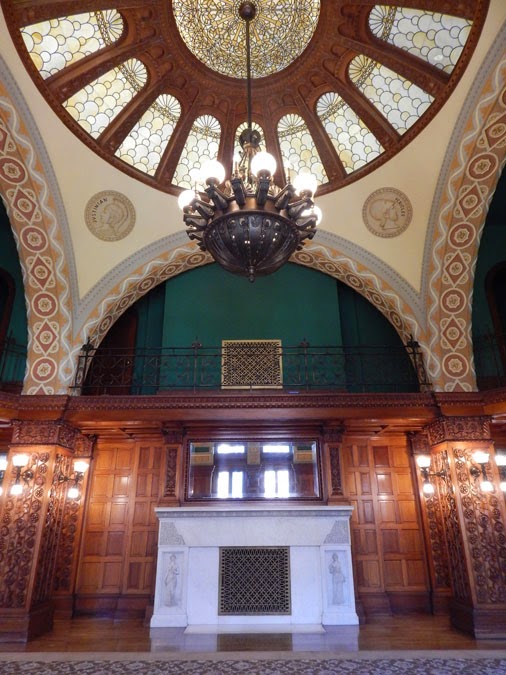 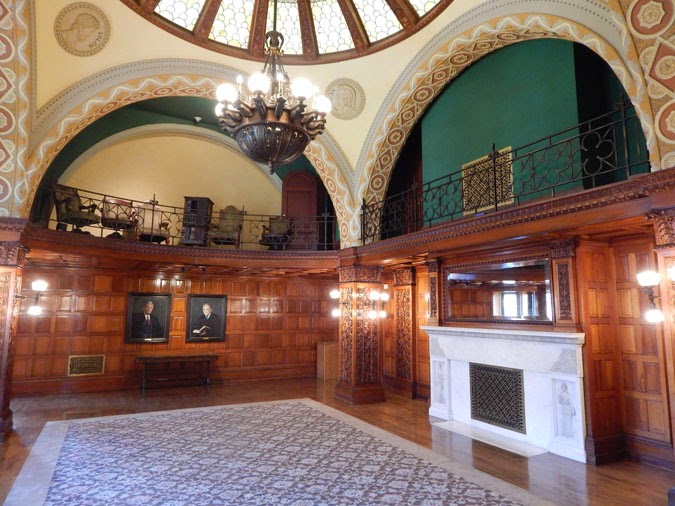 Set beneath a spectacular stained glass dome, this is the most ornate space in the building and originally functioned as the law library, later being converted to a courtroom. 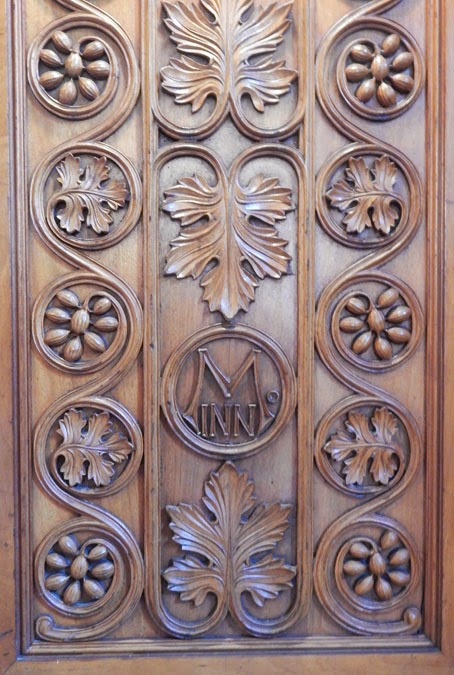 The extensive ornamentation in the space includes female figures depicting law and justice flanking the fireplace; relief heads below the skylight depicting prominent figures in the history of law; and ornate wood carvings incorporating symbols for St. Paul, Minnesota, and the United States.

In addition to these restored spaces there are a number of exhibits on display in the building.  These include the permanent “Uncle Sam Worked Here” exhibit on the ground level showcasing the history of the building and its restoration, and the Landmark Gallery on the lower level.  The Ramsey County Historical Society has rotating exhibits of local history in a large space located off of the “Hamm Foyer” on Sixth Street, with its original marble and mosaic floor still intact. 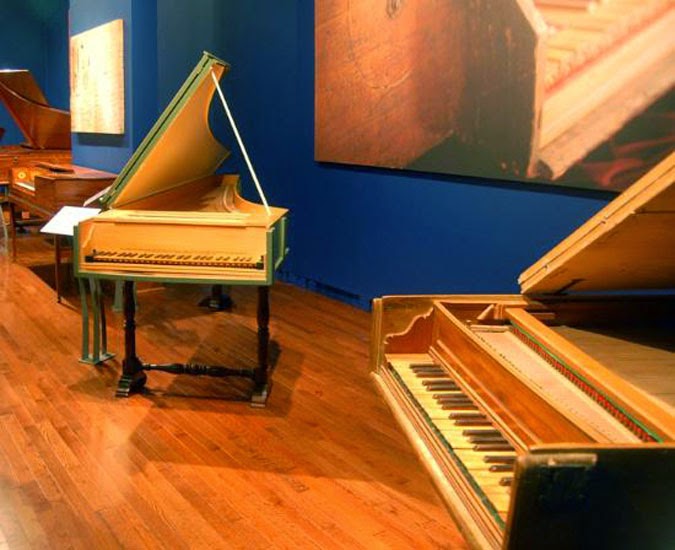 The second floor features the Schubert Club Museum, with an extensive collection of early keyboard instruments and manuscripts and letters by many of the greatest composers from Mozart to Gershwin.  Also located on the second floor is the Gallery of Wood, showcasing rotating exhibits by the American Association of Woodturners. 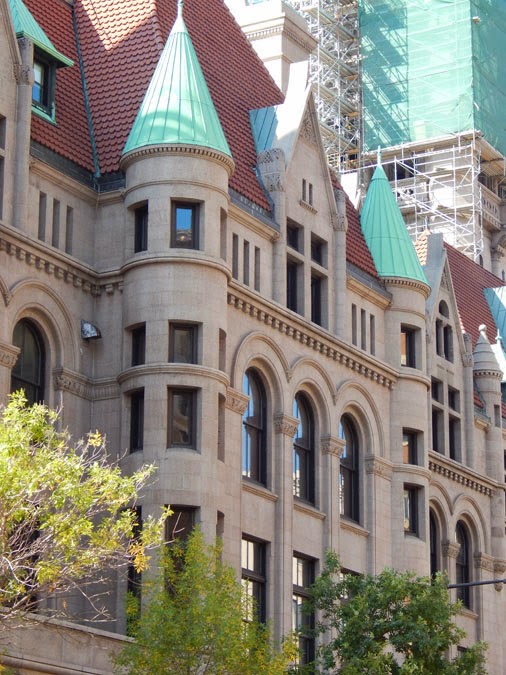