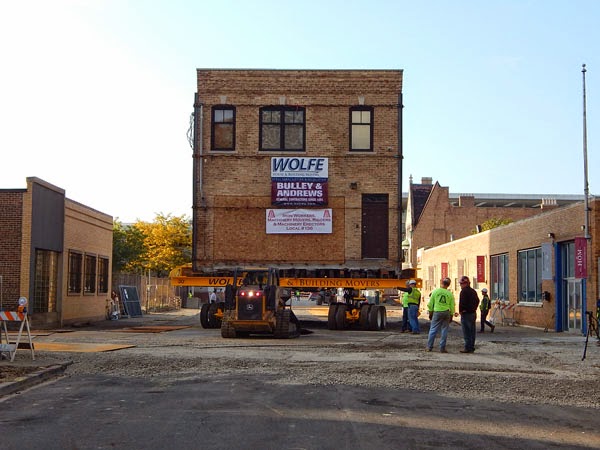 The long-awaited relocation of the Rees coach house took place on Wednesday October 1, 2014.  In just under an hour, beginning at 8:00am, the brick masonry structure was moved about 400 feet from the southwest corner of Prairie Avenue and 21st Street to its new home at the rear of 2017 S. Prairie Avenue.   The coach house measures 25 feet wide by 35 feet deep, stands 23 feet high, and weighs 187 tons (374,000 pounds).

The Harriet F. Rees house was built in 1888-1889 at 2110 S. Prairie Avenue at a cost of $20,000.  It was designed by Henry Ives Cobb of the firm of Cobb & Frost, architects of the Potter Palmer castle (demolished), the Newberry Library, 18 buildings on the University of Chicago, the Chicago Athletic Club, the house at 1811 S. Prairie Avenue, and many other structures.  Rees, a 71 year old widow at the time construction began, died in 1892 and the house was sold to the Edson Keith Jr. family.  By 1920, during the decline of Prairie Avenue, the house was converted to a rooming house.  In 1970, it was briefly home to the Prairie House Café, and then reverted to use as apartments.  The current owners purchased the house in 2001 and have undertaken extensive restoration of the interior.  It was designated a Chicago landmark in March 2012. 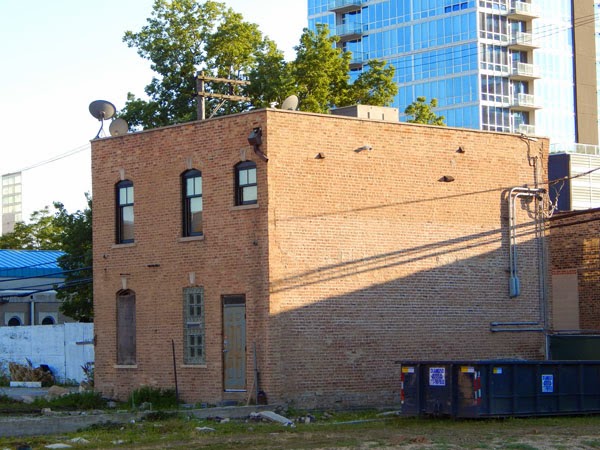 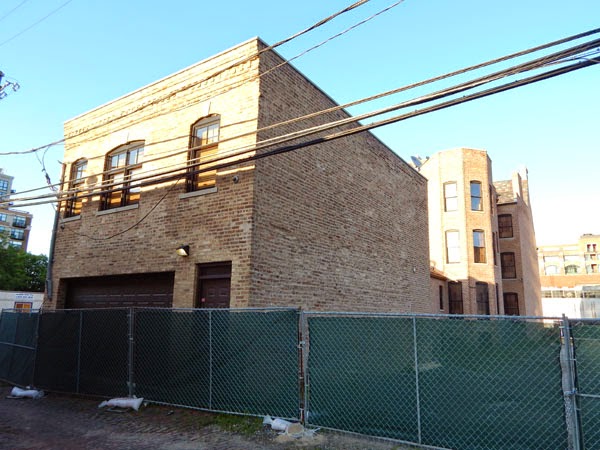 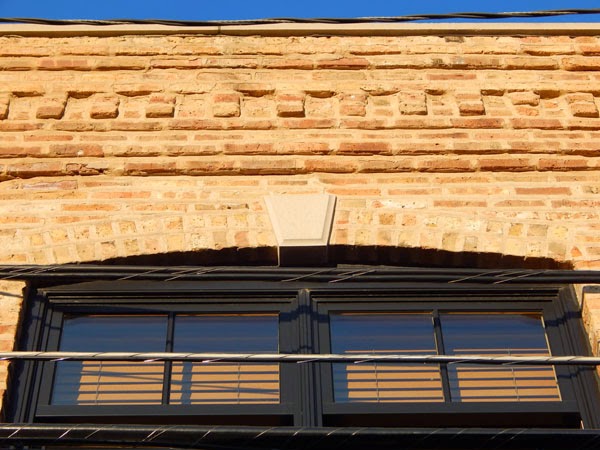 The coach house has an interesting history of its own.    When Rees purchased her property in 1888 for $15,000 from Mark Kimball, who lived next door at 2108 S. Prairie Avenue, Kimball’s coach house extended across the back of both lots.  It is believed that the Kimball house was built in the late 1860s, meaning that the coach house may actually pre-date the Great Chicago Fire (which bypassed the neighborhood).  Rees acquired ownership of the south half of the coach house, and a party wall was constructed in the middle to divide it into two separate sections.  The Kimball house and its half of the coach house were demolished in the 1930s, leaving the two-story Rees coach house intact.  Interesting also is the fact that the coach house had a full basement.  Story has it that the carriages utilized the ground floor, and a ramp was used to take the horses down to the stables in the basement level.  The coachman would have occupied the rooms on the second story. 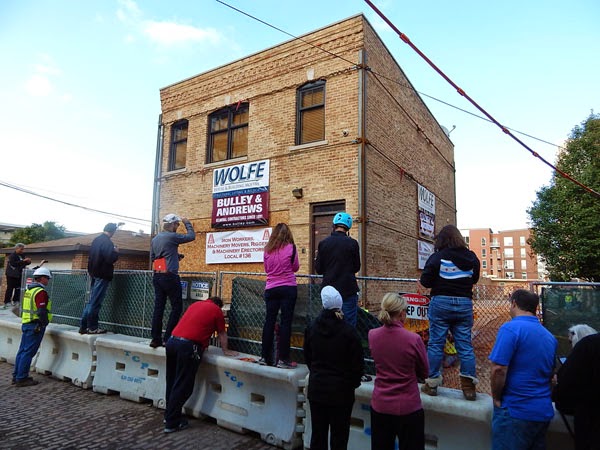 Media, including Frank Mathie from Channel 7, mixed with a crowd of curious neighbors and onlookers, as the coach house moved north on Prairie Avenue, at a rate of one to three miles per hour. 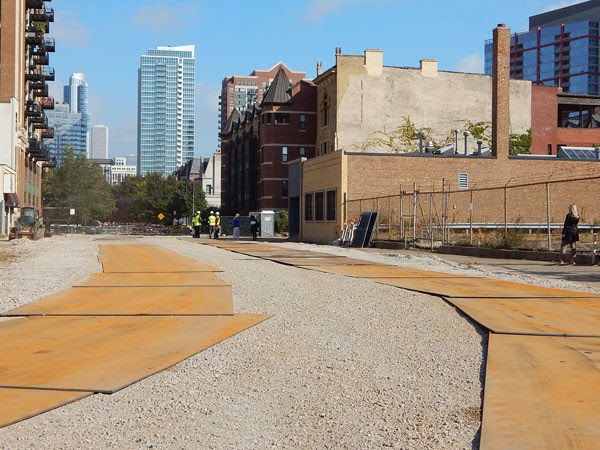 The street had been leveled with gravel and steel plates, providing a smooth and level surface. 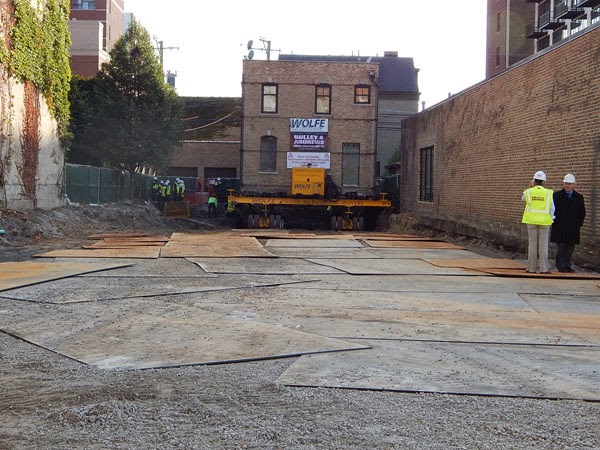 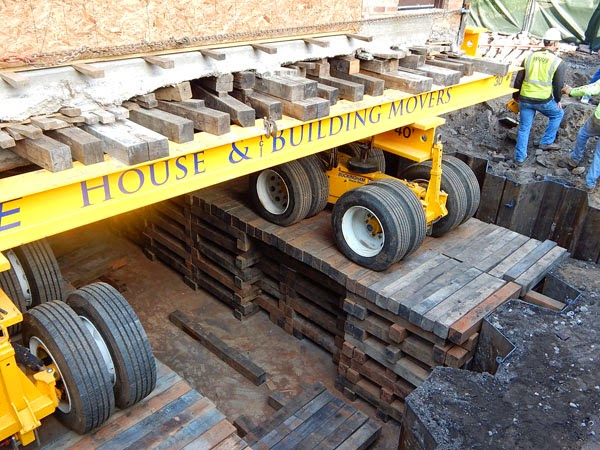 After being moved back onto its new lot, the coach house was rolled onto wood cribbings that had been constructed on the base of what will form the new foundation. 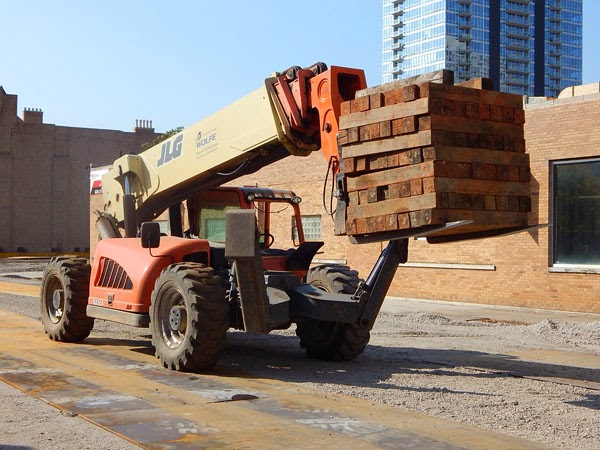 In preparation for the move, the coach house was separated from its foundation using diamond-bladed masonry saws. 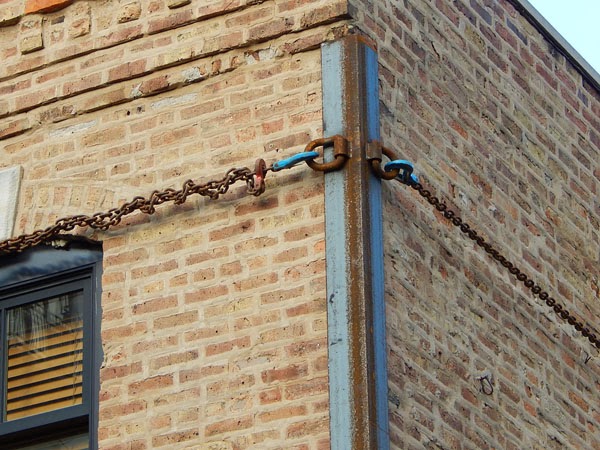 Steel corner braces were installed at all four corners and chains were wrapped around the building, to keep it square and plumb. 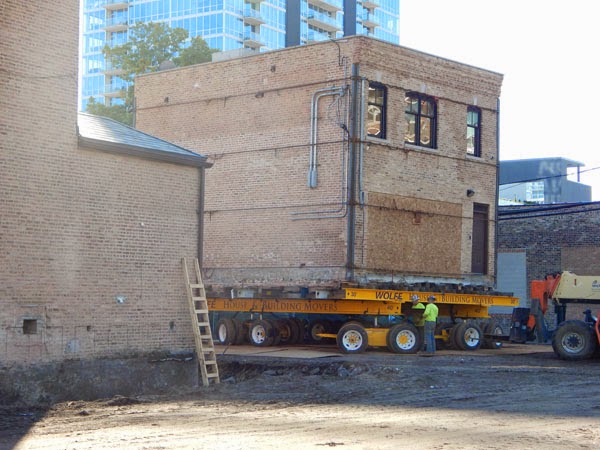 Jacks were then used to raise the building seven feet into the air, at which point it was placed onto six massive automated dollies and turned 90 degrees. While this work was ongoing, excavation at the new site was undertaken, and the floor of the new basement was poured. 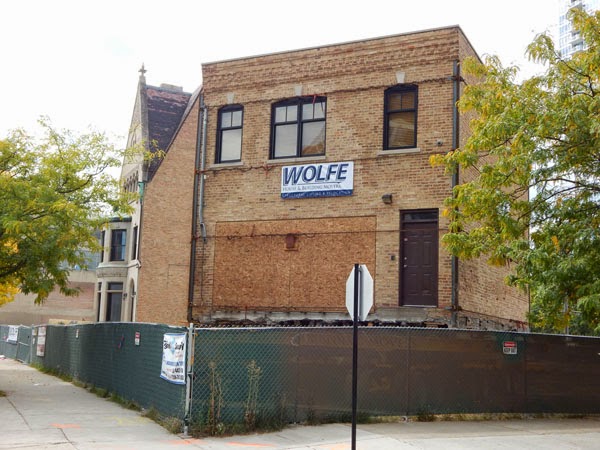 On September 25th, the structure was turned another 45 degrees and rolled to the corner where it sat on its dollies until today’s move. 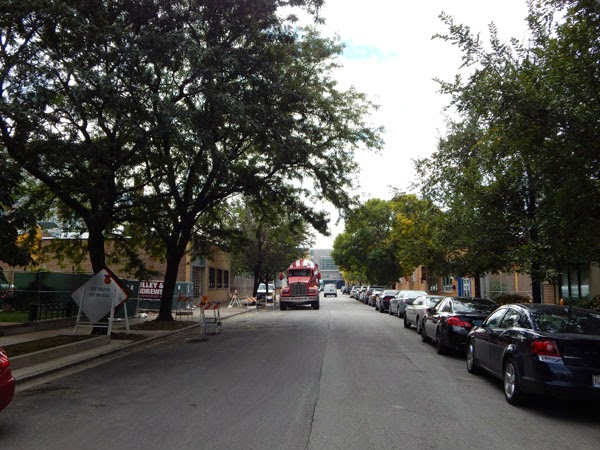 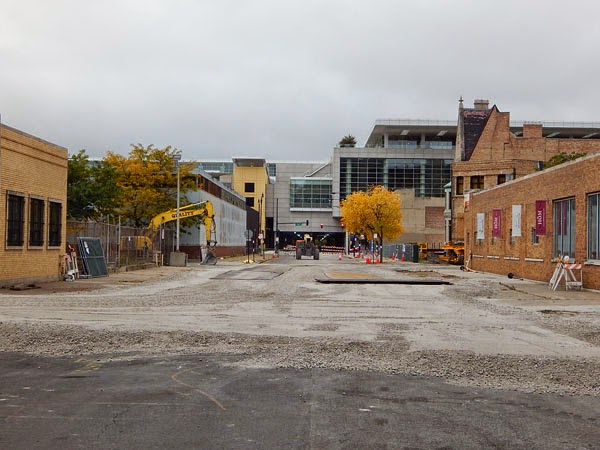 In the past two days, all of the trees along the route on the 2000 block of Prairie Avenue were cut down, and the stone base and steel plates were put into place along the planned route. 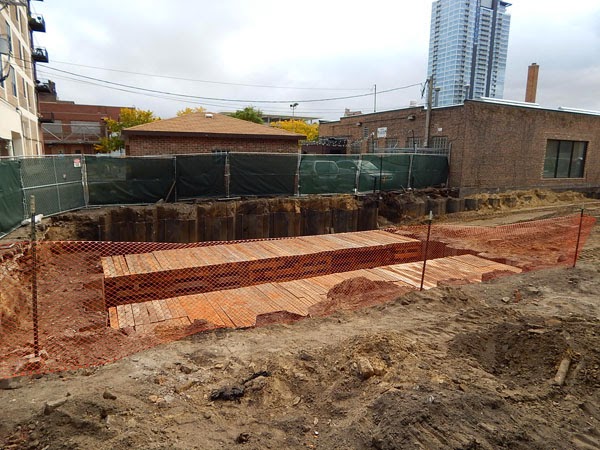 At the same time, the wood cribbing was built at the new site to support the structure once it was moved. 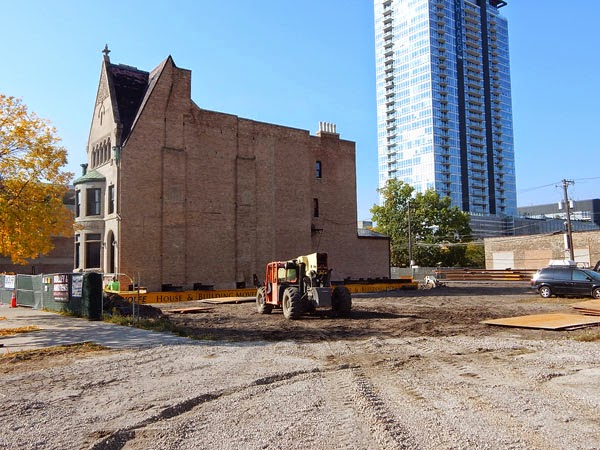 The main house is scheduled to be moved in early November 2014.  That move will take much longer and will be far more complicated.  For one thing, the 3-1/2 story brick and limestone house weighs in at 763 tons, more than four times the weight of the coach house.  That will make it one of the heaviest residential buildings ever moved in the United States.  Additionally, the house will need to be turned around, as the front façade will face west at its new location, rather than east as it does presently.  That will involve moving the house considerably north of its new site, almost to Cullerton, and then backing the house onto the lot. 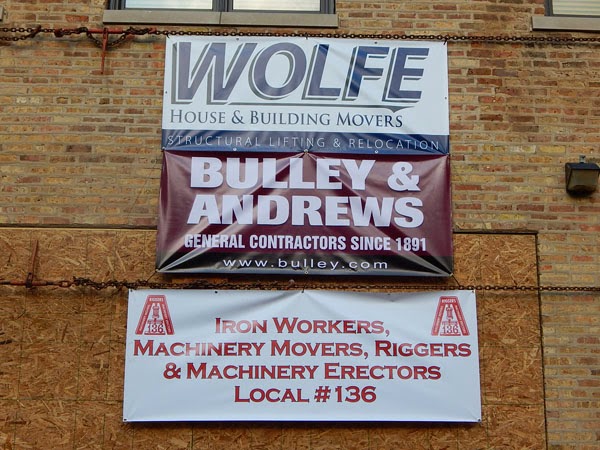 The move and restoration of the Rees house and coach house are being coordinated by Chicago contractor Bulley & Andrews, with Thornton Tomasetti serving as the project’s engineering firm, and Iron Workers, Machinery Movers, Riggers & Machinery Erectors Local #136 providing the necessary labor.  Wolfe House and Building Movers is performing the move of both structures, and McGuire Igleski & Associates, Inc. is serving as historic preservation consultant.    The relocation will make room for the McCormick Place Entertainment District, which will include a 10,000-seat event center on the block bounded by Prairie Avenue, 21st Street, Indiana Avenue, and Cermak Road.

This final series of photos shows the coach house turning off of Prairie Avenue and being moved back on its new site. 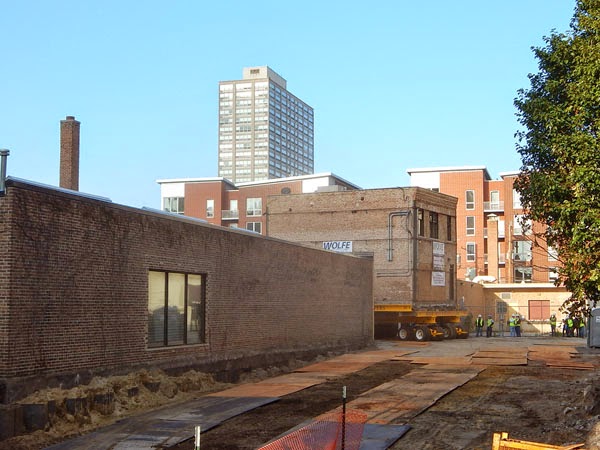 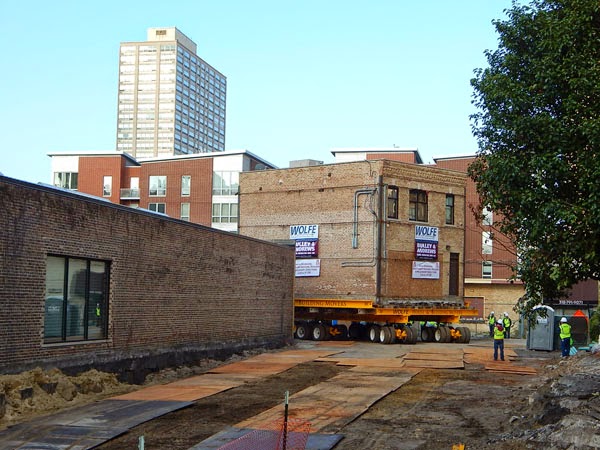 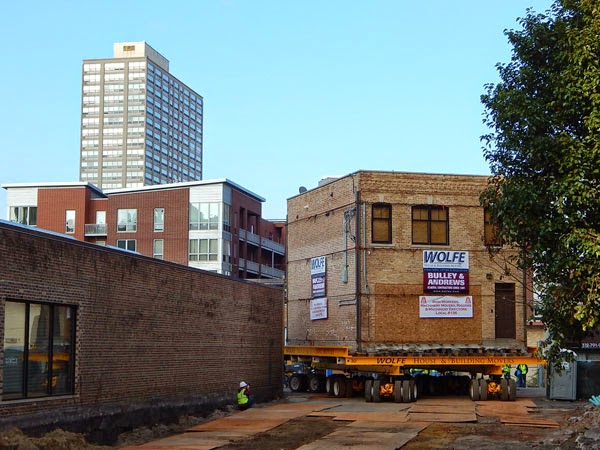 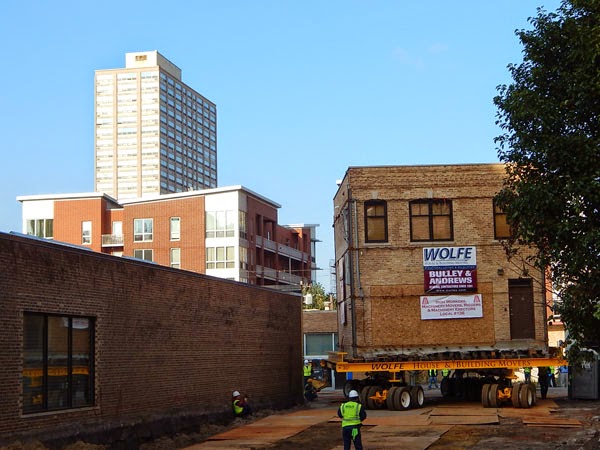 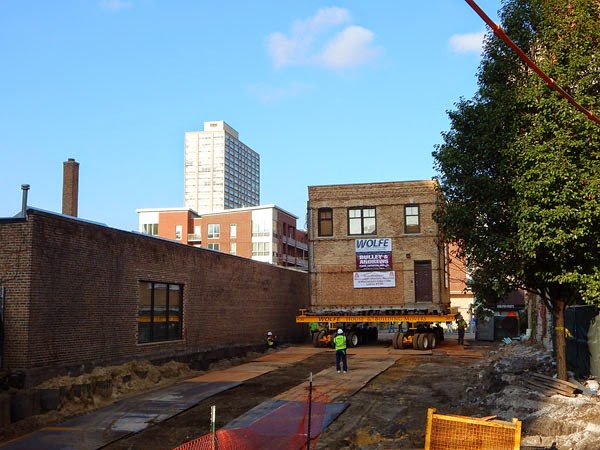 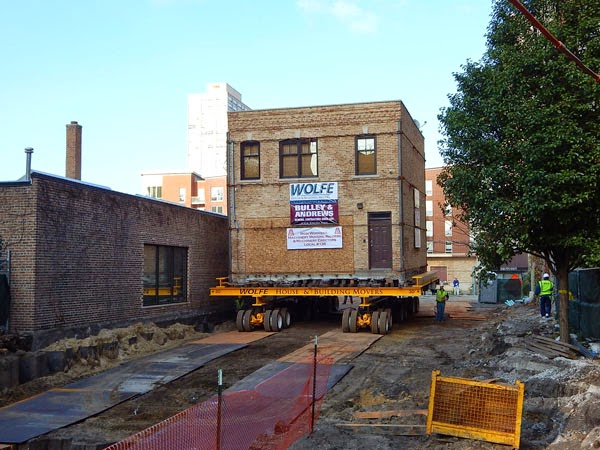 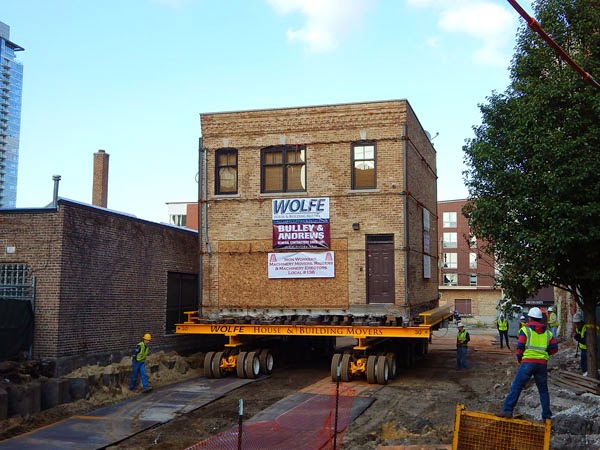 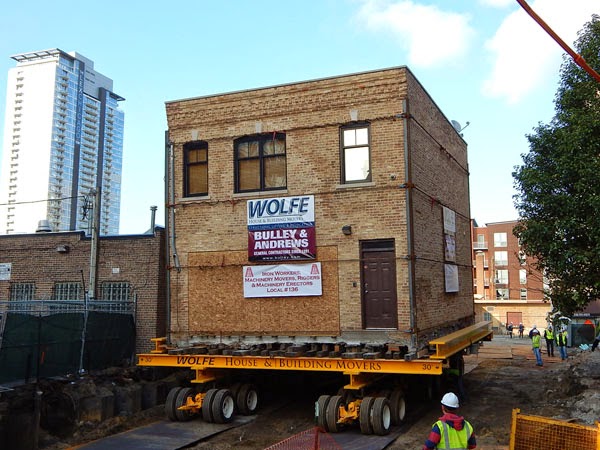