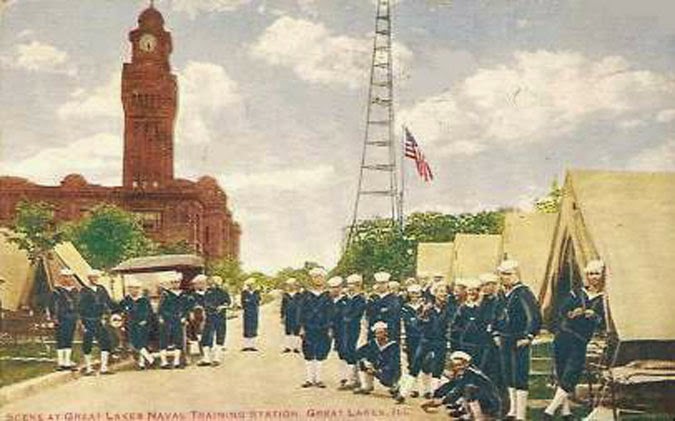 Both today and in 1918, Great Lakes Naval Training Station sailors like to visit Chicago while on leave. During World War I, the number of sailors at Great Lakes increased dramatically. Many of these sailors were young and far from home, some for the first time. Frances Glessner Lee recognized the morale raising potential of entertainment in a private home. With her friends Henry E. Voegeli, Assistant Manager of the Chicago Symphony Orchestra, and his wife, Mrs. Lee invited sailors to her home at 1700 S. Prairie Avenue on Sunday evenings for a good meal, music or lecture, and friendship.

In order to assist the sailors as best she could, Mrs. Lee created a file for each sailor that she entertained. The files recorded the dates of their visits, dates of correspondence sent and received, gifts she sent, a physical description, their mother’s address, and her overall impression of the young man. Mrs. Lee also attached letters, postcards, and photos she received from the sailors and their families to her records and marked the records of the sailors she liked best with gold star stickers. Given the large number of gold star records, Mrs. Lee seemed to greatly enjoy her evenings with the Great Lakes sailors. 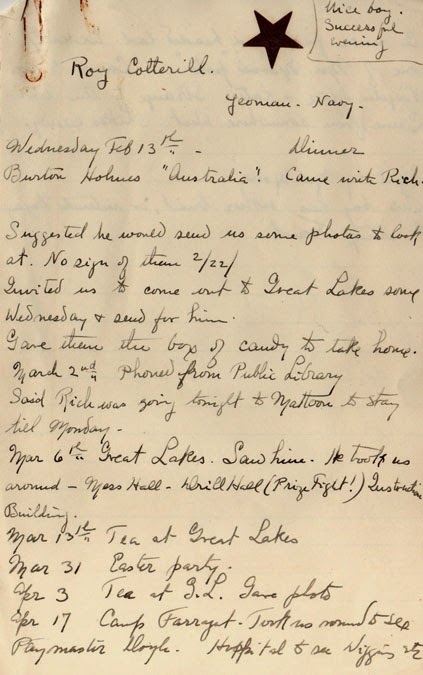 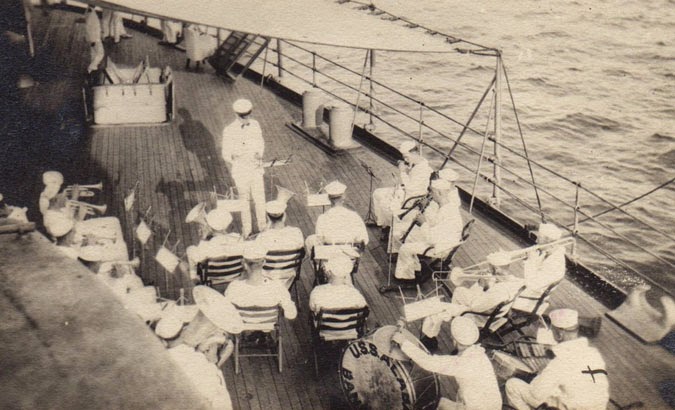 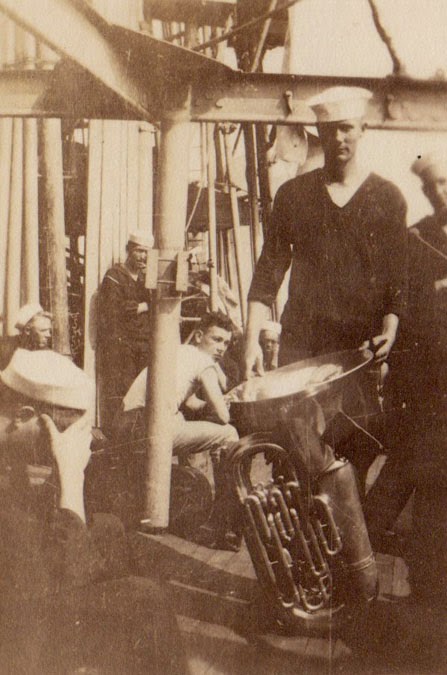 Charles Young remained at Great Lakes for most of the war as a member of a touring naval band led by John Philip Sousa. He sent Mrs. Lee letters and postcards from the band’s Midwestern Liberty Loan tour stops. 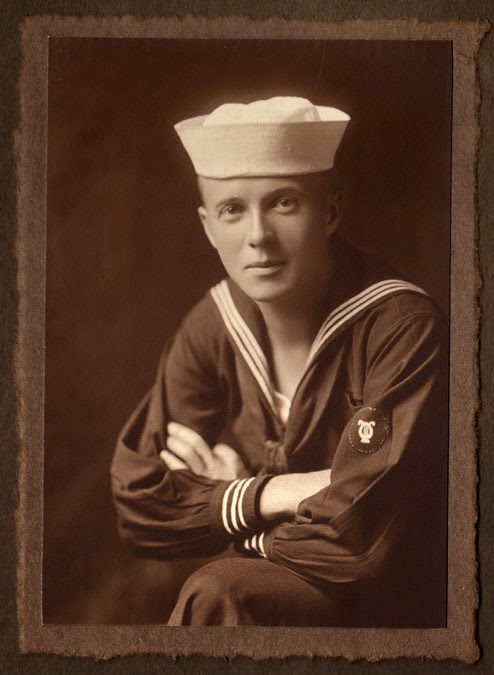 Herbert Wilson (no relation to Talmage Wilson) sent lighthearted letters from the Naval Radio School at Harvard University. He and Mrs. Lee penned a series of humorous exchanges between “I.M.A. Fish,” “Ananias Johnson,” and “Captain Blowhard.” Joseph McCarthy’s letters were far more serious than the other sailors. McCarthy frequently declared that he loved Mrs. Lee as much as his own mother. He sailed with the U.S.S. Kentucky and wrote Mrs. Lee dozens of letters, several of which detailed the dangers of German U-Boats to Allied Atlantic convoys. 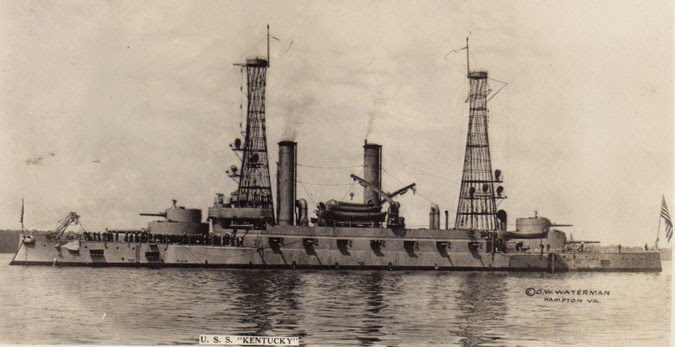 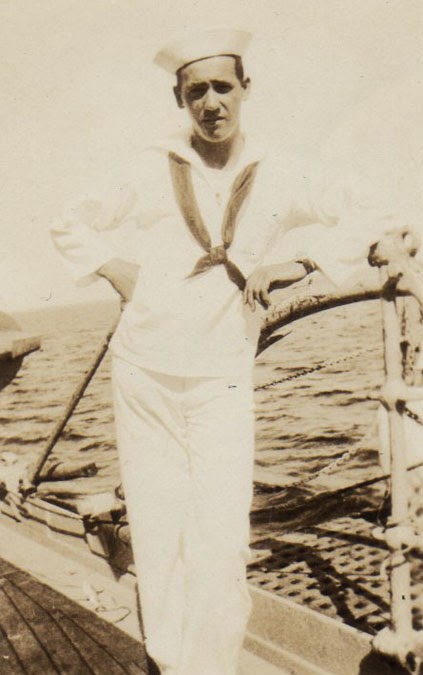 Fred. M. Wolfe was a particular favorite of Mrs. Lee’s. A Colorado Springs native, Wolfe’s heart trouble and shy nature also concerned Mrs. Lee when they met in 1918. Mrs. Lee corresponded both with Wolfe’s mother and his younger brother Lawrence, a soldier in France. According to the letters, Mrs. Wolfe even visited Mrs. Lee in Chicago in 1918. After Great Lakes, the Navy sent Wolfe to the radio training school at Harvard University. Unlike the other Great Lakes sailors, Wolfe continued his friendship with Mrs. Lee after the war and visited her often at Wendell House in Boston. 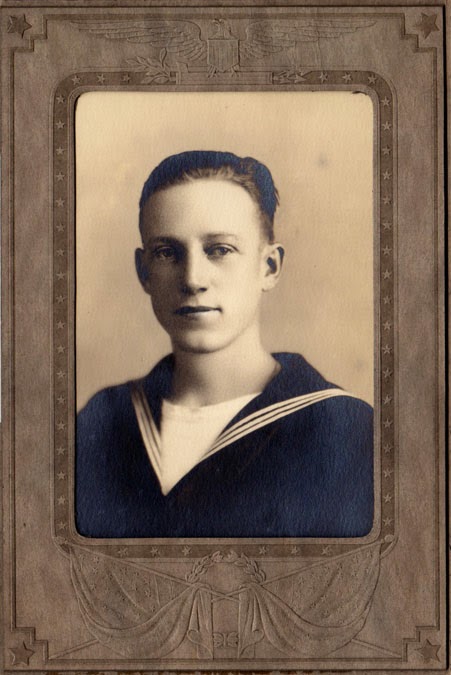 Mrs. Lee fell out of touch with many of her sailors during the fall of 1918. Several of her correspondents worried that Mrs. Lee was a victim of the flu epidemic. Mrs. Lee was not ill, but busy with a new endeavor in Boston.

Mrs. Lee wanted to do more for sailors than simply provide them dinner and an evening’s entertainment. She wanted to give them a home away from home. As early as February 1918, Mrs. Lee’s letters expressed an interest in starting a dormitory for servicemen on leave. In November, 1918, this dormitory became a reality. Mrs. Lee accepted the position of Resident Manager at Wendell House, a home for enlisted men and non-commissioned officers in adjoining houses at 31 Mt. Vernon St. and 75 Hancock St. in Boston’s Beacon Hill neighborhood. The Massachusetts Branch for Women of the Special Aid Society for American Preparedness funded Wendell House. Though other servicemen’s homes operated in Beacon Hill at the time, Wendell House was unique as Mrs. Lee actually lived at Wendell House and conducted the house less like a servicemen’s club and more like a private home. The Special Aid Society even furnished Wendell House with used, donated furniture in order to achieve a “lived in” atmosphere. According to Mrs. Lee, the servicemen approved of Wendell House. On December 14, 1918 she wrote to her mother's Monday Morning Reading Class that “the boys all say ‘well ma’am, this is the only place we have ever struck that is just like home.’ They settle down as contentedly as cats.” 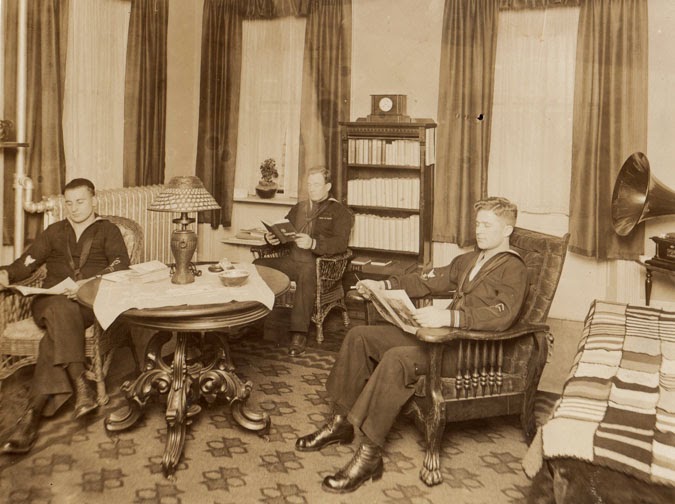 Wendell House offered servicemen lodging in dormitories or a private room. A bed in a private room cost $0.50 per night and a bed in a dormitory room cost $0.35 a night. Each bed, dormitory room, or private room was sponsored by an individual donor or branch of the Special Aid Society. Though Wendell House had a capacity for one hundred men, the couches were sometimes rented out and cots put up to accommodate as many servicemen as possible. Breakfast was available for a nominal fee in the Wendell House cafeteria. Mrs. Glessner and the Monday Morning Reading Class provided the necessary funds to outfit this cafeteria. By April 17, 1919, Wendell House hosted 1,212 different servicemen since opening in December 1918. Wendell House had a high number of repeat or long-term guests as 7,733 beds were occupied in this same period. 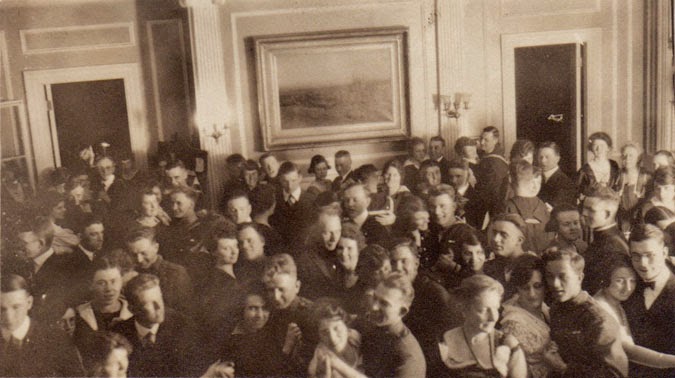 A dance at Wendell House

Mrs. Lee corresponded with fewer Wendell House servicemen, but still took an interest and tried to help them when she could. Several letters indicate she counseled soldier Joseph Hemmes throughout his court-martial and helped unemployed veterans secure jobs. In April 1919, Mrs. Lee described the appreciation of a down and out veteran to the Monday Morning Reading Class:
“His clothes were so forlorn & he had such a hopeless, lost-dog sort of look that we decided he would never get a job so long as he looked that way. I have a little fund of $10.00 a month given by the Winchester Branch to relieve any cases of financial distress. So I took a $10.00 bill and gave it to Charlie (one of our guard) & told him to take this boy out & get him new clothes…Then I gave him a dollar & sent him forth for a job. Wednesday he got one & has gone there today. He said ‘I was ashamed to look anyone in the face, but now I’m all right. I’m going to pay you for all dem tings soon’s I get some pay. I don’t see how you done all dis fer me. It sure wuz my lucky day win I come here.’” Mrs. Lee received similarly warm and appreciative thanks in letters from many Wendell House servicemen and their families. 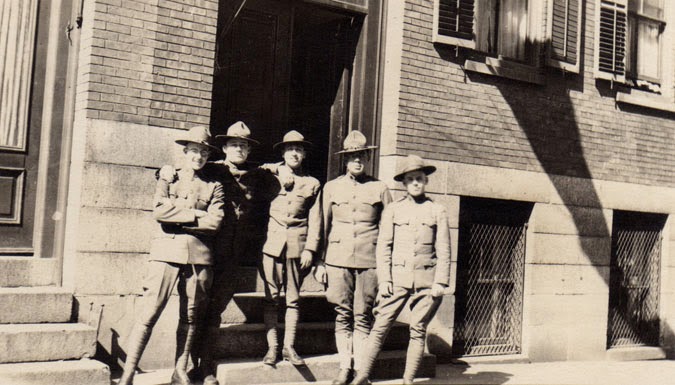 Soldiers in front of Wendell House

According to Mrs. Lee, “Wendell House has the reputation throughout this naval district of being ‘the best place in Boston’ and all the canteens and service houses and hostess rooms know ‘Wendell House Boys’ to be the pick of the three services.” Wendell House was a great success. By July 1919, Mrs. Lee resigned from her position as Resident Manager and returned to The Rocks. Though gone, Mrs. Lee’s hospitality and kindness were not forgotten by the soldiers and sailors she befriended from Great Lakes and Wendell House.

ABOUT OUR GUEST AUTHOR:
Siobhan Heraty was an intern this fall at Glessner House Museum. She is a master’s student in the public history program at Loyola University Chicago. Siobhan developed an interest in World War I as an undergraduate history major and continues to explore this interest as a graduate student through research projects related to American memory of World War I. Given her research interests, working with the Great Lakes and Wendell House collection was an interesting and enjoyable experience for Siobhan.

Posted by Glessner House Museum at 9:00 AM