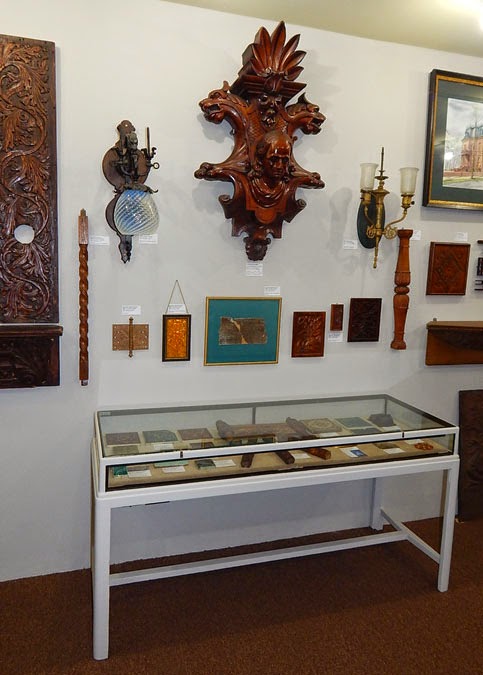 On Monday December 1, 2014, more than 100 people gathered in the coach house of Glessner House Museum to celebrate the opening of the John J. ‘Jack’ Simmerling Gallery of Prairie Avenue History.  Three generations of the Simmerling family were on hand to welcome guests, some of whom came from as far as New York to be present. 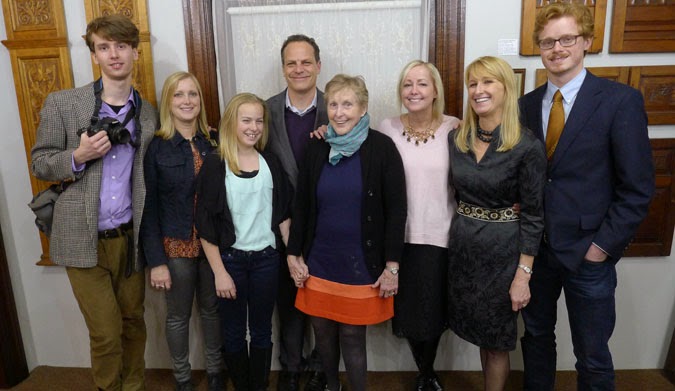 The event opened with a festive reception where guests from all facets of Jack’s life gathered to share memories of Jack, on what would have been his 79th birthday.  Guests travelled from Blue Island where he was born and raised, Beverly/Morgan Park where he lived and owned The Heritage Gallery for more than 50 years, and Ogden Dunes where he maintained a summer resident.  Representatives from the Ridge Historical Society, Beverly Art Center, Smith Village, Smith Senior Living, Historic Pullman Foundation, and the Beverly Art Walk were all on hand, showing the breadth of Jack’s community involvement and the high regard in which he was held by all who knew him.

Bill Tyre, Executive Director and Curator of Glessner House Museum, opened the program, quoting Theodore Roosevelt, who once said “What a man does for himself dies with him.  What he does for his community lives long after he is gone,” noting how the quote could well have been written with Jack in mind.  He recounted how Jack became fascinated with Prairie Avenue when just a young teenager and how he could see beyond the dingy facades of the surviving houses and clearly picture what the street had been in its prime in the late 19th century.  Bill shared stories of R. W. Eyster, a dear friend and mentor to Jack, and Herma Clark, long time columnist for the Chicago Tribune, both of whom were major influences on Jack in his formative years. 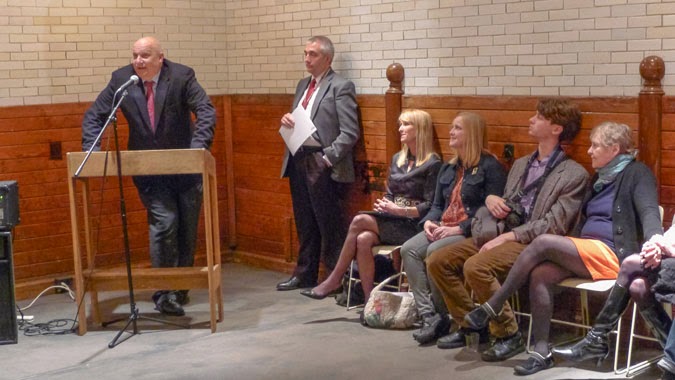 A very special guest for the evening was Tim Samuelson, Cultural Historian for the City of Chicago.  Jack and Tim shared a close bond, and often said that they were twins separated at birth, given their similar passion for Chicago history and trying to preserve it however they could.  He recounted their many visits together and how they were truly kindred spirits.

After Tim spoke, two of Jack’s daughters, Mary and Meg, shared stories of their introduction to Prairie Avenue, with endless Sunday drives up and down Prairie and Calumet, their father retelling all of his favorite stories about the houses and the residents who had lived there.  They pointed out how the event was not really an opening, but a homecoming, as the treasured pieces of these homes that their father had carefully salvaged were finally back home on Prairie Avenue for all to see, along with his incredible collection of paintings and pen and ink sketches depicting all of his favorite houses. 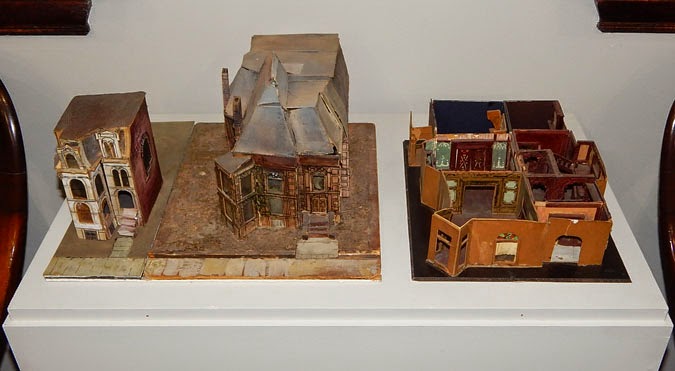 The current gallery is a temporary space measuring just under 300 feet, and containing highlights from Jack’s vast collection.  The long-term vision of the museum is to convert a 1,250 foot space over the coach house into a much large permanent gallery where the full collection can be put on display.  Architects Krueck + Sexton have drawn up plans for the new gallery, projected to cost $422,000, with another $50,000 needed for artifact and art conservation and the construction of custom display cases and mounts. 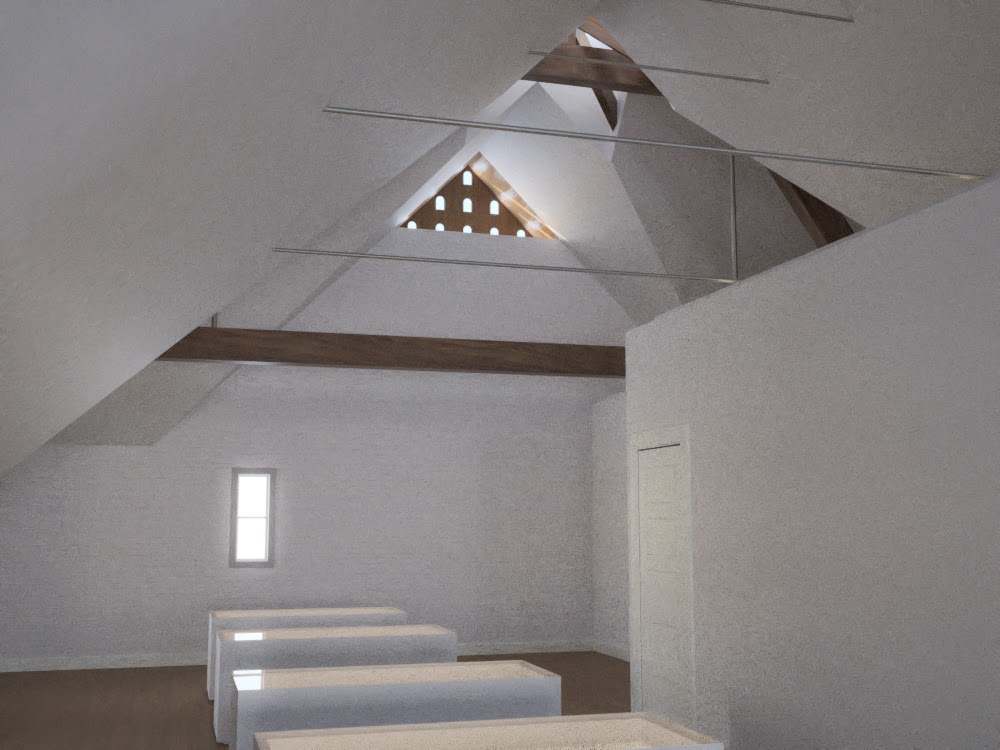 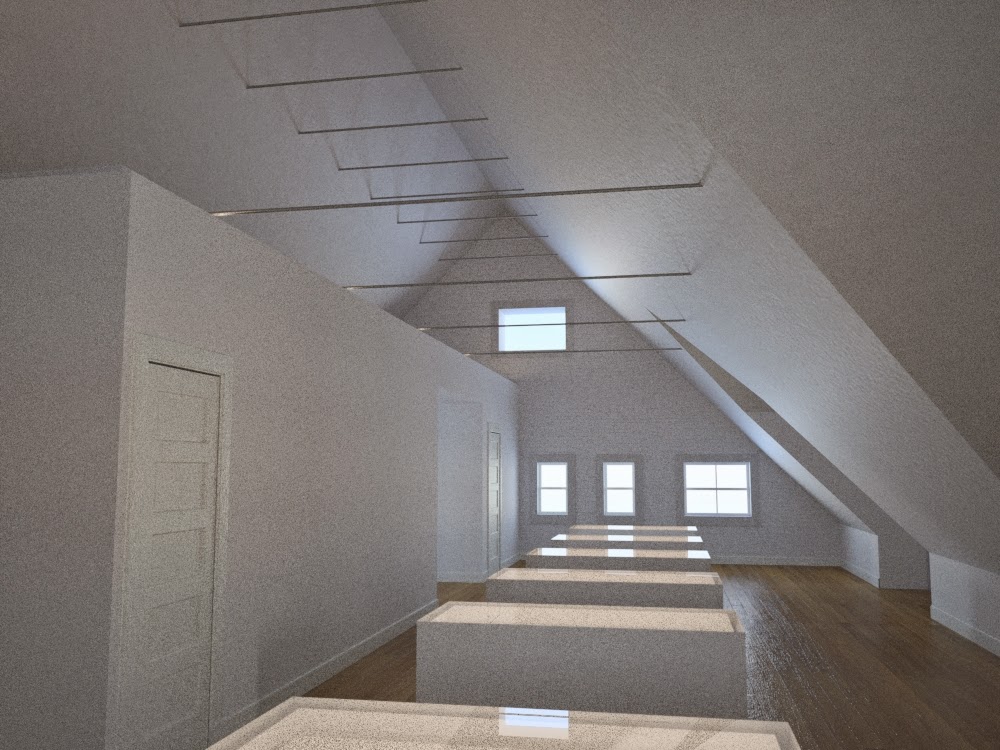 The fundraising campaign received a welcome boost with the announcement of the inaugural gift to the new permanent gallery.  Jim Blauw and Krista Grimm, long-time friends of Jack, presented the museum with a check for $5,000 in memory of their dear friend, and to help ensure that his collection and memory would always be preserved at Glessner House Museum. 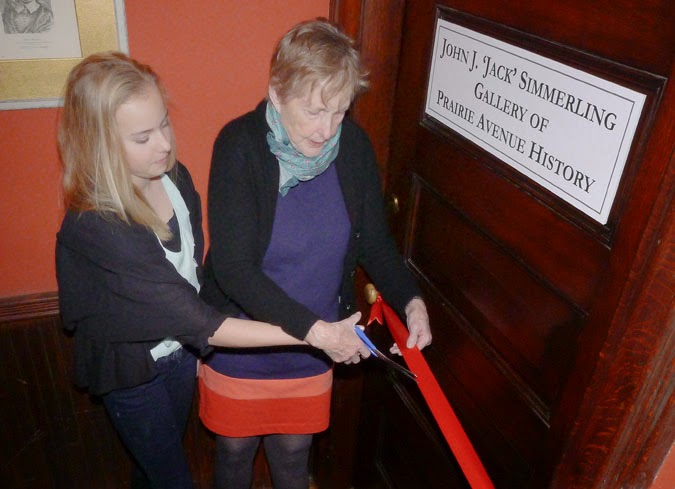 After the presentation was complete, Simmerling family members and selected guests travelled up to the second floor where Jack’s wife of 55 years, Margie, assisted by her granddaughter Eliza, cut the red ribbon officially opening the gallery.  Guests then spent the remainder of the evening marveling at the collection of objects – from tiles and carved wood mouldings to oil paintings and buildings models created by Jack.  One of the items that received the most attention was a hand painted poster announcing talks of Old Chicago to be given by 16-year-old Jack Simmerling in 1952. 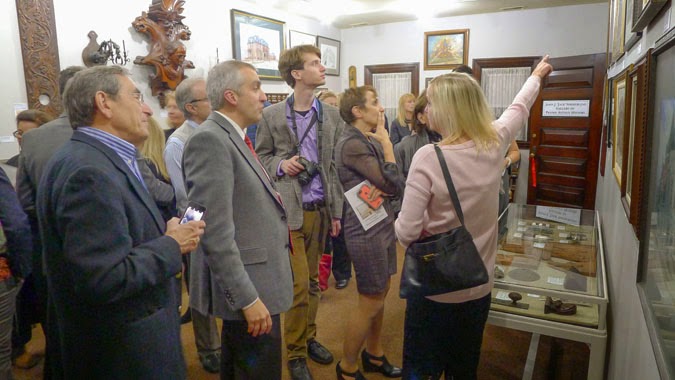 The evening came to a close with attendees sharing more stories of Jack as artist, story teller, historian, and friend.  Although Jack is longer with us, the event showed that many continue to carry Jack in their hearts, and the new gallery at Glessner House Museum will ensure that his irreplaceable contributions in preserving Prairie Avenue will always be available for present and future generations to enjoy. 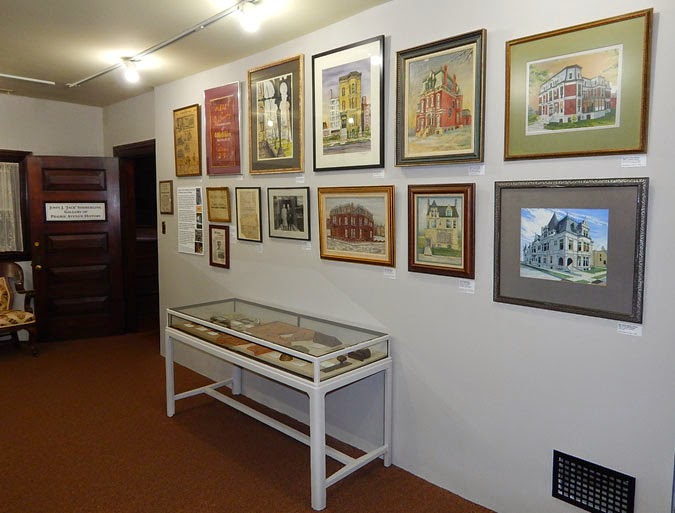 TOURS
Special one-hour tours of the gallery led by Bill Tyre will be offered at 10:00am on Saturdays December 13, 20, and 27.  Cost is $10 per person, $8 for museum members, with all proceeds going toward the new permanent gallery.  Prepaid reservations are required, call 312-326-1480.  Additional gallery tours will be scheduled on a regular basis beginning in early 2015.


For those interested in making a gift to the John J. ‘Jack’ Simmerling Gallery of Prairie Avenue History, please click here to download a donation form.
Posted by Glessner House Museum at 1:20 PM