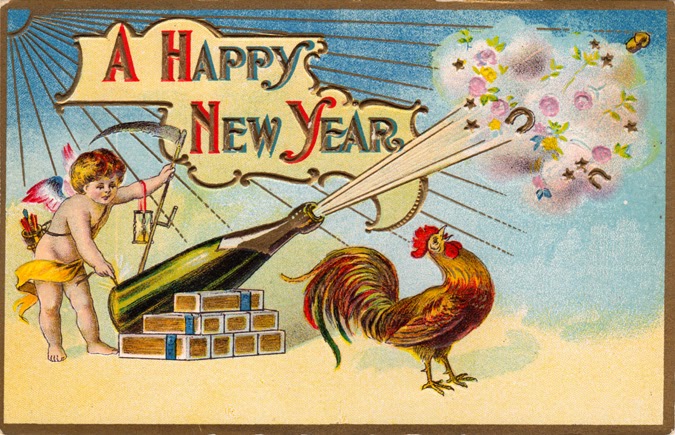 In a few days, the world will bid farewell to another year and usher in 2015.  In celebration, we take a brief look back at how the Glessners and a few of their fellow Chicagoans welcomed in the year 1900.

The Glessners celebrated with a small gathering in their home which was greatly enhanced by the arrival of their dear friend, Theodore Thomas, conductor of the symphony orchestra, and a few of his musicians.  Frances Glessner related the following in her journal for Sunday December 31, 1899:

“Mr. & Mrs. Philo Otis, Miss Hutchinson, Frances, Mr. Badger, Mr. Hendricks, Mr. Hendrickson came to supper.  Mr. Hendricks and Mr. Hendrickson left at 10.  Mr. Thomas came in between eleven and twelve.  At twelve we were congratulating each other when the most beautiful music seemed to fill the whole house.  Mr. Thomas had brought in eight or more members of the orchestra into the dining room.  The doors were shut into the dining room, and the whole house seemed filled with harmony.  The men played German chorales.  Then the doors were opened, we went out and wished every one a happy new year, after that the men played burlesques on a German street band.  We were moved to tears in the first part, and nearly hurt ourselves laughing over the other part.  We had some sandwiches, champagne, and mulled wine – and a very delightful time.” 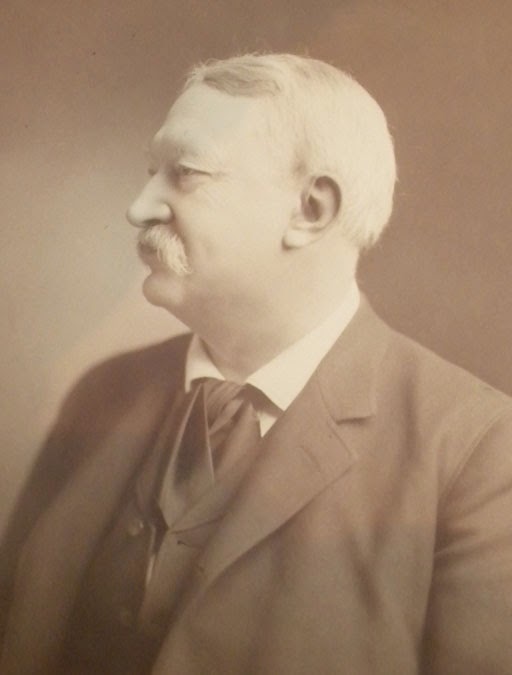 From the Chicago Tribune we get a glimpse of how others in Chicago were celebrating.   Midnight masses and “watch night” services were common in many of the churches as indicated below:

“The dawn of the ‘holy year’ in Chicago found the many churches where midnight mass was sung surrounded by great throngs of people.  Every edifice was crowded, the aisles were filled, and many stood in the vestibules, but could hear or see little of the services.  At the Cathedral of the Holy Name, North State and Superior streets, and at the Holy Family Church, May and Twelfth streets, the crowds were greatest.  At both these were special details of police and detectives.

“At the North Side Cathedral the crowd began to gather soon after 8 p.m.  By 11:30 there was a crowd of 2,000 people around the church.  Shortly before midnight a small door was opened, and through this the crowd filed slowly till the church was filled.  Hundreds were turned away disappointed. 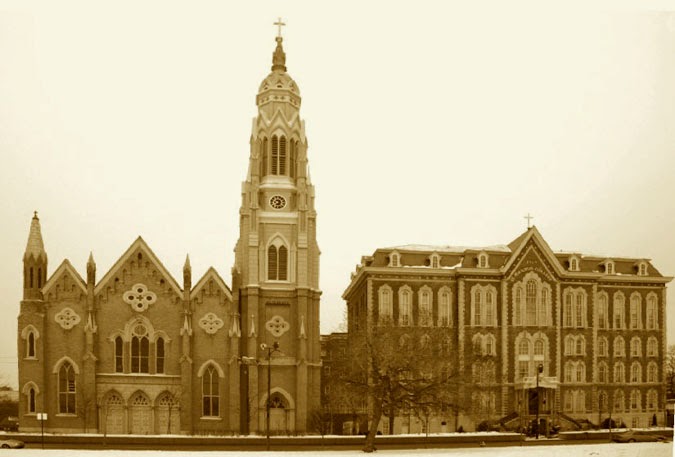 “The Holy Family Church, Twelfth and May streets, which has the largest congregation of any Catholic Church in the city, was crowded long before midnight.  Solemn high mass was sung, and the music and floral decorations were fitting for the celebration.” 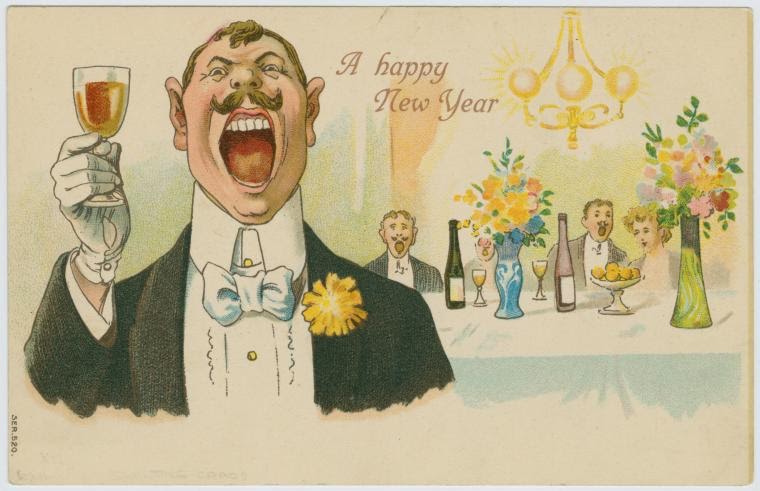 Cycling clubs, extremely popular at the turn of the last century, provided appropriate entertainment and activity.  The Board of Trade Cycling Club gave an annual entertainment, consisting of a minstrel show with club members taking all of the roles.  T. J. Cannon, the master of ceremonies for the show, was in Colonial costume and powdered wig; others performers were in black face. 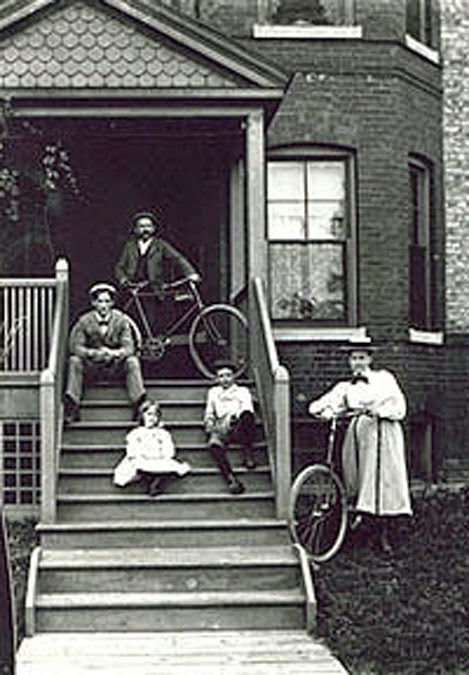 Cyclists on the porch of a Pullman home

The Chicago Cycling Club continued their annual tradition of a ride to Pullman:

“Members of the Chicago Cycling club having an authenticated record of 2:50 for a mile unpaced will start at 10 o’clock this forenoon on their fourteenth annual New Year’s day run to Pullman. . . The annual run has been held in all sorts and kinds of weather in the thirteen years in which it has flourished.  Roads from the consistency of mush to the frozen pathway which will be found today have been religiously whirled over by the pioneers of Chicago cycling every year.  Sometimes they rode in snow, sometimes in rain, sometimes in a combination of rain and snow; but they have always ridden the course and finished up with a big dinner at Pullman . . . Twenty-five or thirty riders have signified their intention of taking the run today.  Probably not more than fifteen will turn out, but these will be the oldest riders of the lot.  The younger generation do not take as kindly to the hardships of the task as do those who first burned the pathway for the bicycle in Chicago.” 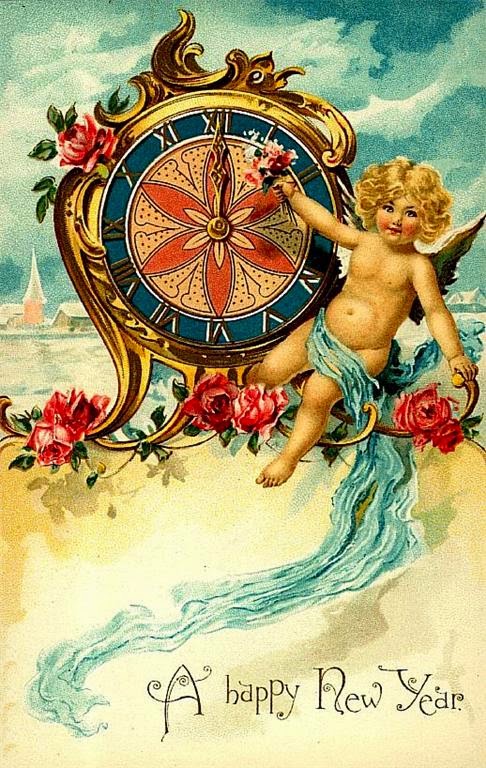 The holiday was also celebrated with many parties and receptions including these two on the South Side:

“Two entertainments with which the week closed were given by Mrs. Chauncey Blair and Mrs. Arthur Caton last evening (December 31).  Mrs. Blair gave an old-fashioned farm supper and dance for the young people.  Pumpkins, jack-o’-lanterns, and other novel features were used in decoration.  Mrs. Caton gave a dinner for nearly fifty guests, followed by a vaudeville entertainment.  The program was supplied entirely by amateurs.” 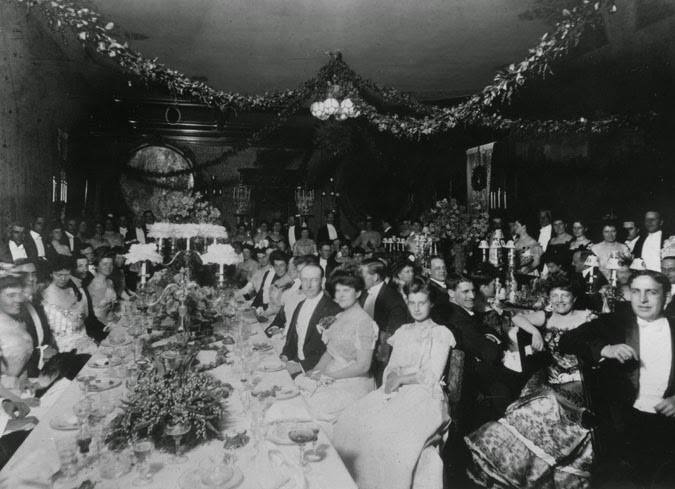 NOTE:  The Chauncey Blair residence was at 4830 S. Drexel Boulevard. 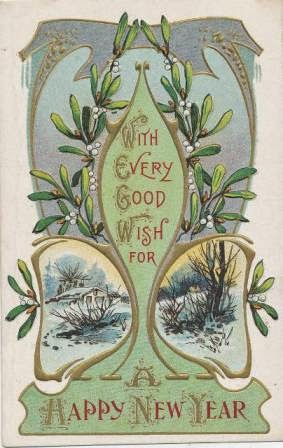 Regardless of how you choose to ring in 2015, we wish our readers a happy, healthy, and prosperous New Year!
Posted by Glessner House Museum at 2:47 PM