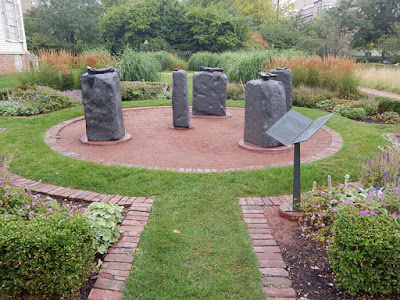 On Thursday August 6, 2015, the Jane Addams Memorial in the Chicago Women’s Park and Gardens, entitled Helping Hands, took on new life as part of an innovative program known as Statue Stories Chicago.  Through the program, visitors to the park will be able to use their mobile devices to receive a “call” from the statue to learn more about Nobel Peace Prize winner and social reformer Jane Addams (1860-1935). 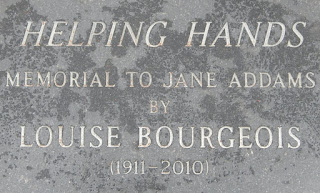 HELPING HANDS
Helping Hands was sculpted in 1993 by Louise Bourgeois (1911-2010), an internationally recognized French-born artist who lived and worked in New York.  For this work, the first major work of art in the Chicago parks to honor a significant woman, Bourgeois chose to create carved black granite hands that sit atop a series of rough hewn stone pedestals set into a circle. 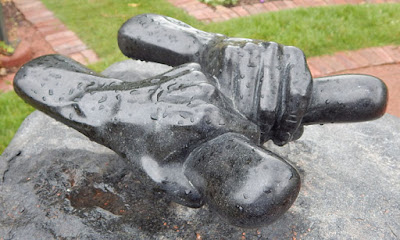 The sculpture was original installed in 1996 in Jane Addams Memorial Park at Navy Pier.  The site proved to be a less than ideal location for the work, and following vandalism in 2006, it was removed and the damaged pieces were recarved by the artist, then in her mid-90s.

In 2011, the Chicago Park District, working with Mimi McKay, the landscape architect for the Chicago Women’s Park and Gardens, chose the Park as the site for the sculpture.  Located immediately north of the Clarke House Museum, Helping Hands sits within a beautifully landscaped setting, the arrangement of the sculptures and their pedestals being the same as the artist intended for their first location. 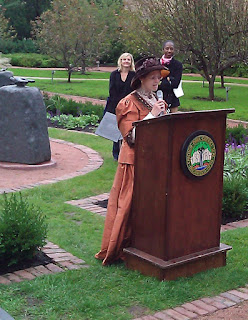 It was dedicated on September 24, 2011 with a ceremony that included a speech by an actress in the guise of Jane Addams herself. 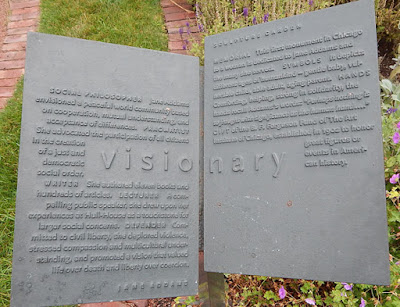 The plaque at the site is entitled “Jane Addams Sculpture Garden – visionary” and summarizes her life and contributions as follows:
SOCIAL PHILOSOPHER – Jane Addams envisioned a peaceful world community based on cooperation, mutual understanding, and acceptance of differences.
PRAGMATIST – She advocated the participation of all citizens in the creation of a just and democratic social order.
WRITER – She authored eleven books and hundreds of articles.
LECTURER – A compelling public speaker, she drew upon her experiences at Hull-House as a touchstone for larger social concerns.
DEFENDER – Committed to civil liberty, she deplored violence, stressed compassion and multicultural understanding, and promoted a vision that valued life over death and liberty over coercion.
MEMORIAL – This first monument in Chicago to a woman is dedicated to Jane Addams and the many she served.
SYMBOLS – It depicts different ages of humankind – gentle baby, vulnerable child, able adult, aging parent.
HANDS – Comforting, helping, strong in solidarity, the hands recall Addam’s words: “Perhaps nothing is so fraught with significance as the human hand….”
GIFT of the B. F. Ferguson Fund of The Art Institute of Chicago, established in 1902 to honor great figures or events in American history. 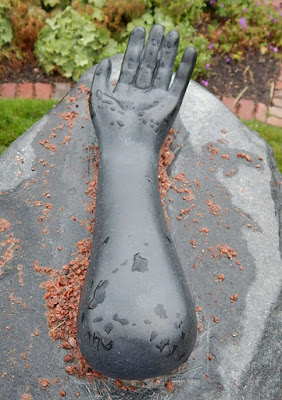 B. F. FERGUSON FUND
The Ferguson Fund is named for lumber merchant and philanthropist Benjamin Franklin Ferguson, who left a $1,000,000 charitable trust gift that has funded many of the most important public monuments and sculptures in Chicago.  Among the first works to be funded were the Fountain of the Great Lakes by Lorado Taft in the South Garden of the Art Institute of Chicago, and the Statue of the Republic by Daniel Chester French in Jackson Park.  Lorado Taft’s monumental Fountain of Time at the western edge of the Midway Plaisance in Washington Park, Henry Hering’s relief sculptures known as Defense and Regeneration on the south pylons of the Michigan Avenue bridge, and Ivan Mestrovic’s Bowman and the Spearman on the Michigan Avenue Plaza in Grant Park were all funded during the 1920s.  More recent pieces include Nuclear Energy by Henry Moore at the University of Chicago, and I Have a Dream by Abbott Pattison at Chicago State University. 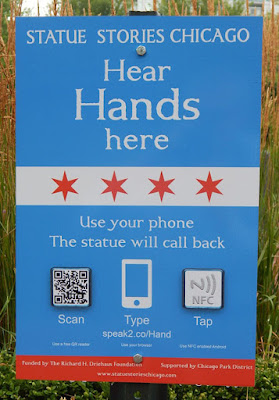 STATUE STORIES CHICAGO
Statue Stories Chicago is the first U.S. version of a project that began in London in 2014 and showcases 30 sculptures throughout the city.  Funded by The Richard H. Driehaus Foundation in cooperation with the Chicago Park District, the project allows pedestrians to swipe their smart phone on a plaque and get a call back.  For Helping Hands, the narrative was written by author Blue Balliett and recorded by Steppenwolf’s Amy Morton.  Balliett noted that “I think Jane Addams, who never stopped reaching out, connecting, and helping, would have loved what Louise Bourgeois created in her honor, and also what this sculptor said: ‘I am not what I am, I am what I do with my hands. . .’”